How BLM protester hurled a bike at police horse, which then bolted down Whitehall and slammed its rider into a traffic light before the animal collided with another woman demonstrator

Distressing video footage tonight has captured the moment a terrified police horse bolted through Westminster and slammed its rider into a traffic light amid chaotic scenes at the Black Lives Matter protest.

Amid the tense backdrop, a masked protestor is spotted purposefully rolling a Boris bike straight in to the path of a group of police horses.

The bike is believed to then hit one of the horses, causing it to panic and bolt straight down Whitehall.

Horrified demonstrators scatter to avoid the runaway horse, which then slams its police rider into a traffic light, causing her to fall to the floor. Other mounted officers then rush to the scene.

The horse turns around, and knocks a pedestrian to the ground before galloping off to escape the crowded area.

Met Police have confirmed the officer is now in hospital recovering from her injuries, while her horse made it back to its stables nearby on its own. 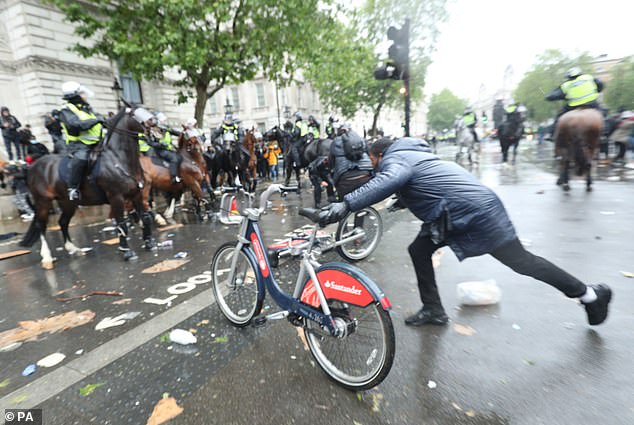 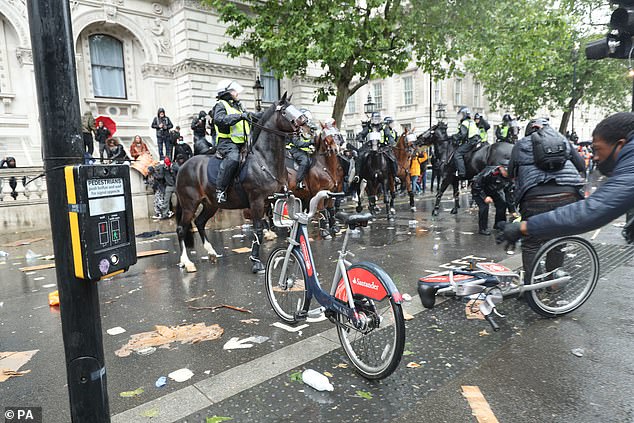 One masked man was seen purposefully rolling a Boris bike straight into the path of a mounted horse. Others were seen on social media throwing projectiles such as water bottles at riot police 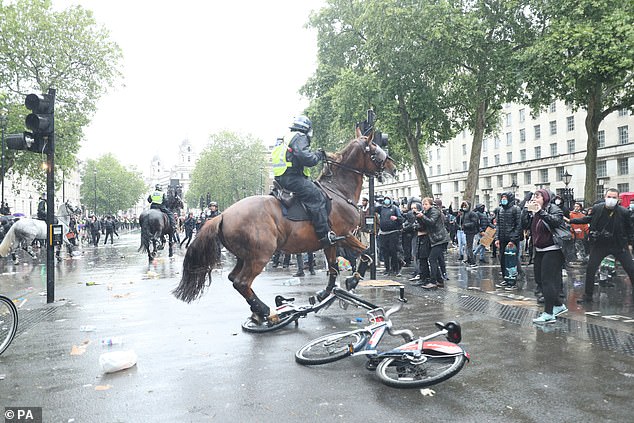 A police horse, believed to have a female rider, bolts after being hit with a bicycle. The horse quickly turns and makes its way down Whitehall as terrified crowds scatter to get out of the way 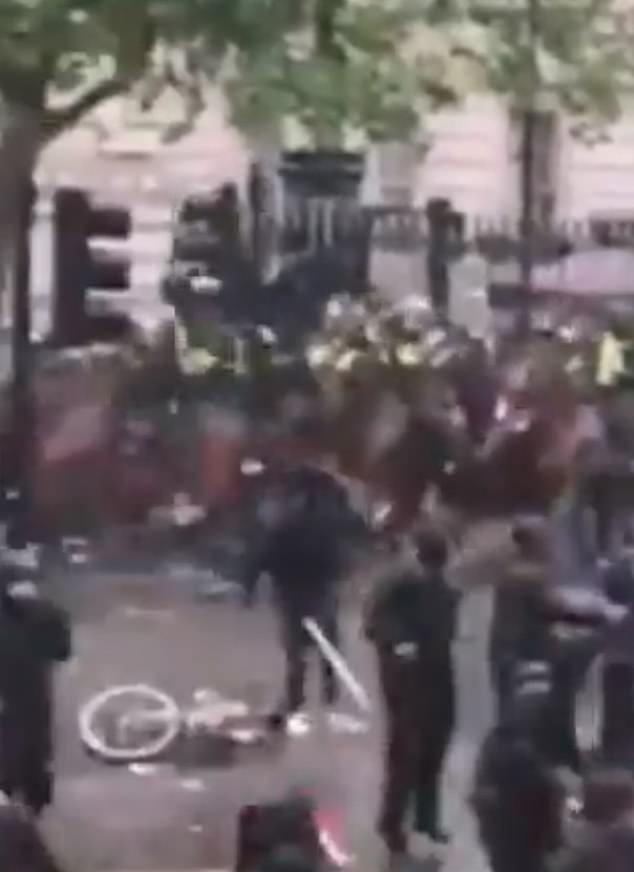 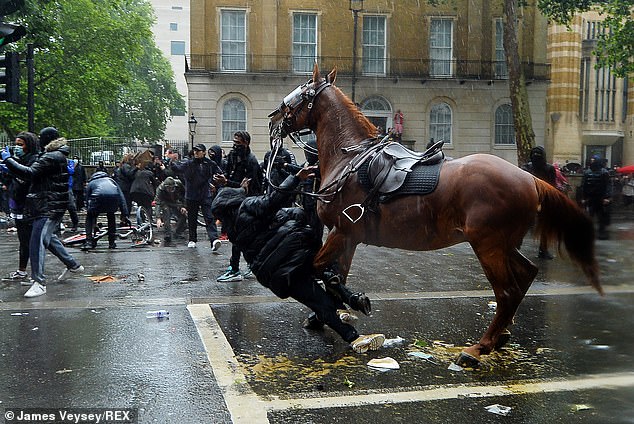 The runaway police horse then turns back on itself, slamming a demonstrator to the ground as it attempts to flee the scene 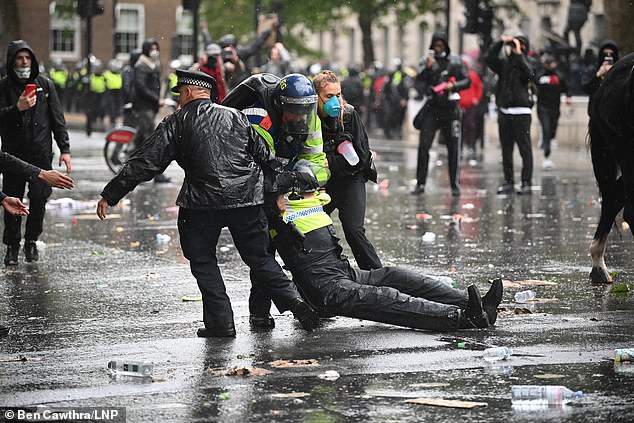 The injured officer is seen being pulled off the street by two other officers and a protestor. Met Police have confirmed she is recovering in hospital

When contacted for comment by the Mail Online, the Metropolitan Police were still waiting to hear confirmation about the officer’s condition.

The incident occured as thousands of protestors took to the streets of London to protest against police brutality, following the death of US citizen George Floyd at the hands of Minessota police officer Derek Chauvin and other members of the police.

Protestors congregated in Parliament Square and Downing Street before moving across the other locations in the English capital including Battersea and Victoria.

The scenes on Saturday are the latest in a string of protests to have taken place throughout the week in London. 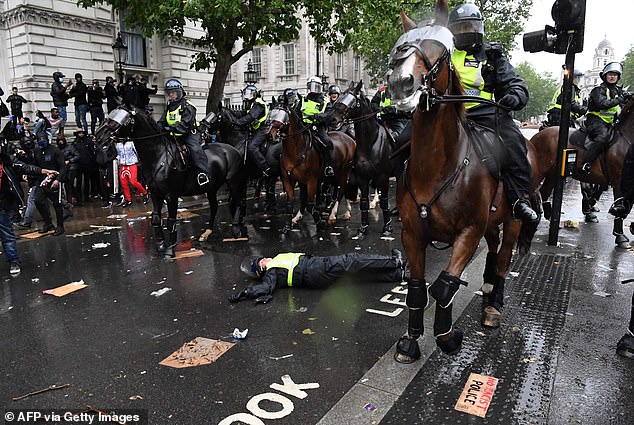 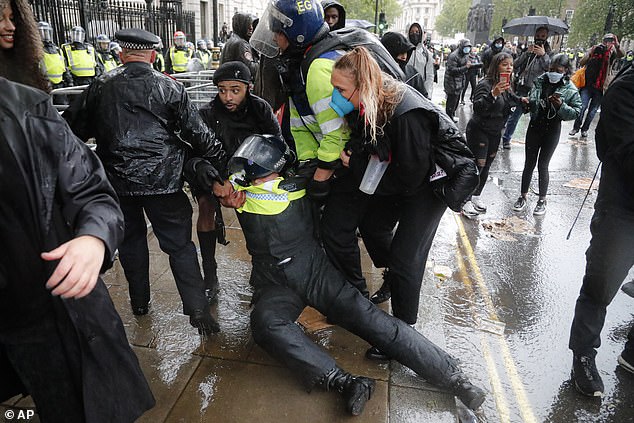 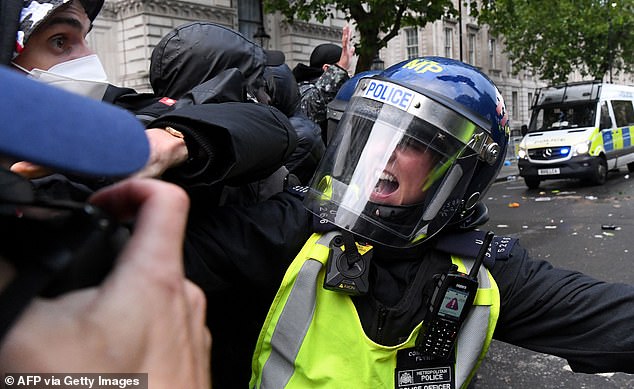 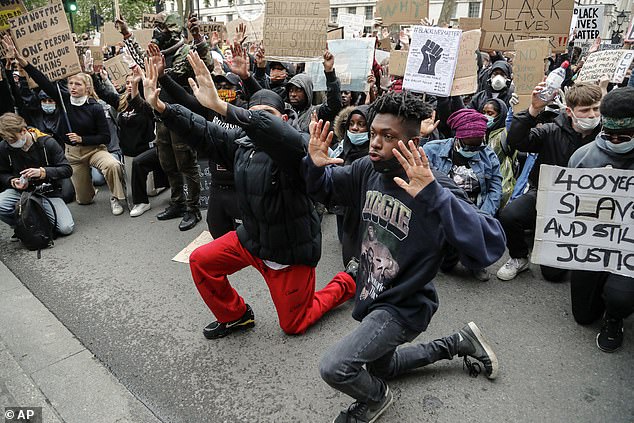 Demonstrators also congregated in Parliament Square, whilst holding signs and kneeling down on one knee 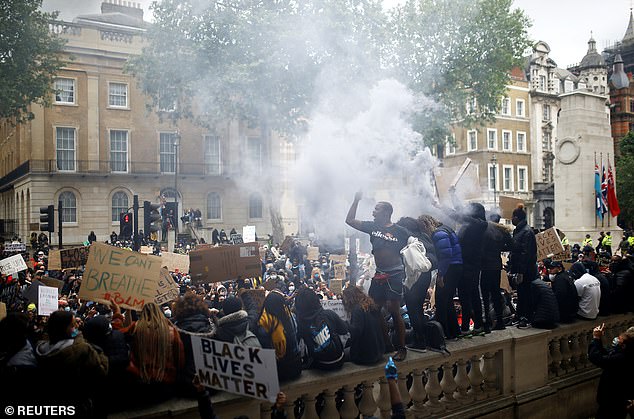 The demonstrations occurred despite please from Government ministers, including Home Secretary Priti Patel and Health Secretary Matt Hancock, to not break lockdown regulations and attend the protests.

Some protestors were seen wearing face masks and other means of protective equipment.

The heavyweight boxing champion made a passionate speech calling for the need to ‘speak out in peaceful demonstrations’ and not to protest with ‘selfish motives and turning it into rioting and looting’.

There have also been protests in major UK cities such as Manchester, Cardiff, Sheffield and Newcastle.