Fury as thug is jailed for less than two years over punch that left rookie police officer, 24, with deadly brain bleed that needed life-saving surgery

An ‘unacceptable’ prison sentence for a man who left a young police officer needing life-saving surgery has sparked outrage online.

PC Leo Clarke, 24, had been with Cambridgeshire Police for less than a year when he was punched in the head by Joshua Gull, 27, in February.

Speaking at court, Clarke described feeling like ‘prisoner’ within his own home as Gull was jailed for less than two years – sparking fury online.

Liz Groom, Chair of Cambridgeshire Police Federation, said the official body was ‘disappointed’ with the outcome of the case.

‘The Police Federation is highly disappointed with this sentence, which absolutely is not enough’, she said.

‘It doesn’t send the right message to offenders – and does not portray the effect that this has had on Leo and his family.’ 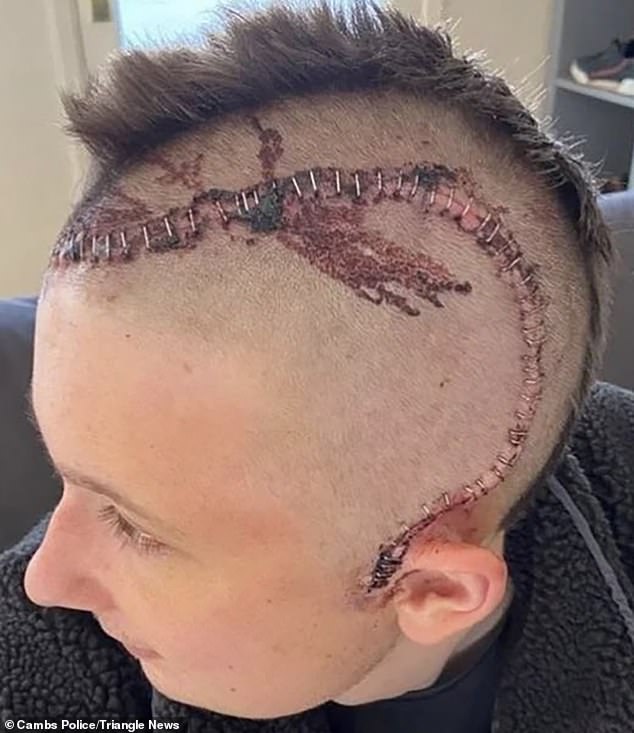 PC Leo Clarke, 24, (above) needed life-saving surgery after he was punched in the head during a routine call out in Peterborough in February

PC Clarke had visited Gull’s Peterborough home on February 8, after reports of violence towards members of his family.

Gull became agitated when PC Clark activated his body-worn video camera – and he grabbed the officer, taking on a fighting stance.

PC Clark, who was a new-in-service police officer, attempted to use PAVA spray – a substance similar to pepper spray – but it was to no avail and Gull punched him in the head.

Gull was arrested soon afterwards – but when PC Clark returned to Peterborough Police Station, a welfare check by a supervisor discovered he was squinting and slurring his words.

He was taken to Peterborough City Hospital where doctors discovered he had a bleed on the brain. 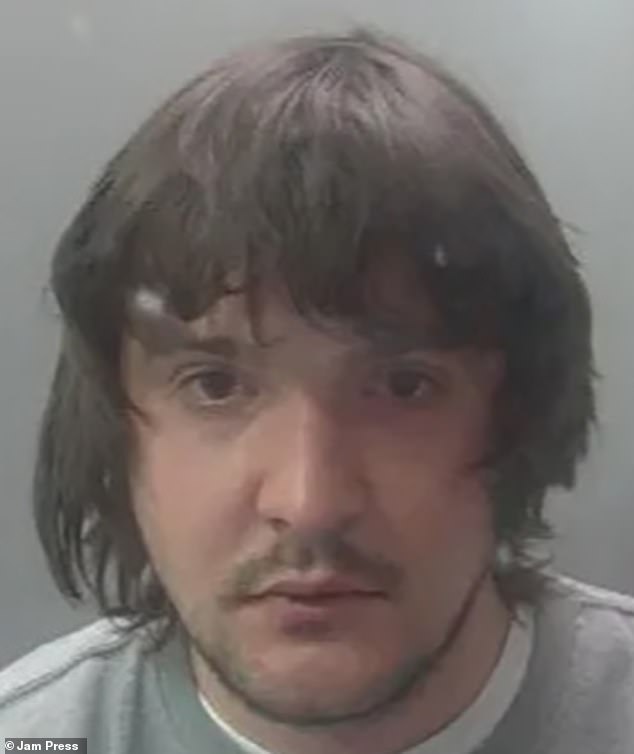 Pictured is Joshua Gull, 27, of Oundle in Northamptonshire, who struck his victim on the head – leaving him with a potentially deadly bleed on the brain

John Apter, Chair of the Police Federation of England and Wales, took to Twitter to blast the ‘unacceptable’ sentence handed to Gull.

He wrote: ‘The animal who did this got just 20 months in prison. The Criminal Justice system failed this officer.

‘What happened to PC Clarke is completely unacceptable – it is not, and must never been seen as just part of the job.

‘He suffered life-changing injuries when he was attacked on duty.

‘My colleagues keep getting let down by the Criminal Justice System. The system needs an overhaul.

Clarke, who was still on probation at the time of the attack, was left in hospital for five days and is still recovering from surgery which left him with huge scars on his head.

The true devastation of his injuries were revealed in a witness impact statement, read to Peterborough Crown Court yesterday as Gull was jailed for 20 months.

Clarke said: ‘This incident has left me feeling like a burden on everyone.

‘I feel like a prisoner as such in my own house because the recovery is so slow and I would really like to go out with my family but I can’t due to the injury.

‘I was a really active person and for that now to be taken away, with the possibility that some of these injuries might never go away, makes me feel quite upset.’ 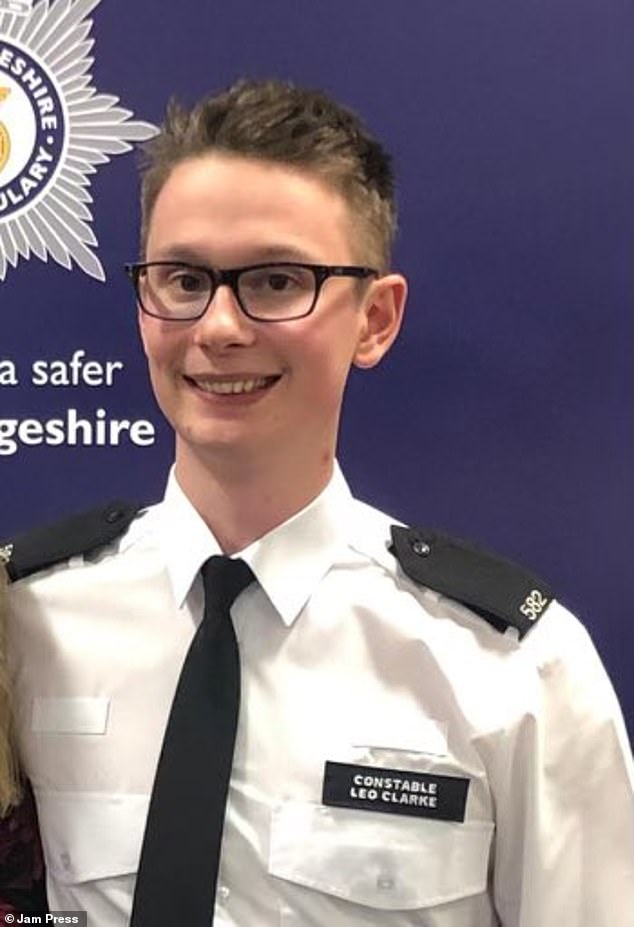 PC Clarke had been in the job for less than a year before the attack. He described feeling ‘like a burden on everyone’ after his life-saving surgery

Gull admitted causing grievous bodily harm, and was sentence to one year and eight months in jail.

While in custody, Gull told officers he regretted what he had done and had been suffering with his mental health.

The court heard that Gull had missed a psychiatric appointment at Peterborough City Hospital on the morning of the assault, and walked to the family address prior to speaking with a doctor.

DC Mat Belfitt, who investigated, said: ‘This was a violent attack against a new-in-service police officer who was simply doing his job in responding to reports of concern for this man.

‘Being subjected to such abuse will not be tolerated and we will continue to take strong action.’

On average, there are 42 assaults on officers in Cambridgeshire every month. 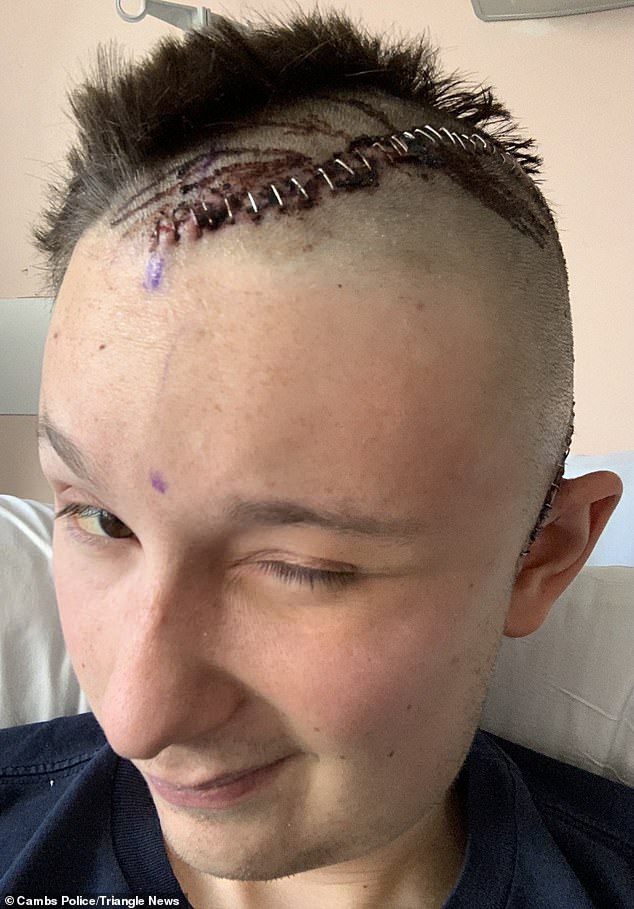 PC Clarke’s story has sparked fury online, with the chair of the Police Federation of England and Wales blasting the ‘unacceptable’ sentence

Chief Constable Nick Dean, added: ‘Police officers and staff are regularly subjected to violence and threats which too often result in injury.

‘It is never acceptable to assume that assaults upon police officers and staff should be tolerated, it is not simply ‘part of the job’.

‘While it is clear that the nature of policing requires members of the organisation to handle difficult and hostile situations, assaults upon them are serious and unacceptable.

‘The public call upon the police to help them when they are most in need.

‘We have a duty to protect the public, but we are all too often prevented from doing so due to violent individuals who choose to attack those who are there to help them.

‘Most importantly it should be remembered that police officers and staff are people, they are fathers, mothers, sons and daughters.

‘When they are attacked they become victims just like any other, but victims who have been attacked while trying to protect others.’