Police officer accused of strangling woman, punching her and hitting her with belt denies discrediting the force

A Kent Police officer accused of strangling a woman as well as punching and hitting her with a belt has denied discrediting the police.

Police Constable Amarjit Dhallu was allegedly recorded on a 999 phone call telling the woman ‘I will smash your f****** face in’, but said the words were just ‘blurted out’.

The officer is facing a misconduct hearing and could be sacked if the allegations against him are found to be proven.

He gave evidence at the hearing on Tuesday and was questioned about the recorded call. 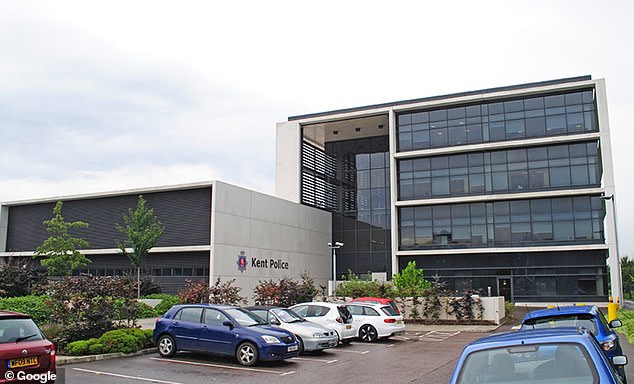 Kent Police officer Amarjit Dhallu was allegedly caught on a 999 phone call saying ‘I will smash your f***ing face in’ to the woman. Pictured: Kent Police HQ

The alleged victim has been granted anonymity during the hearing, and was referred to only as Miss A.

Following Miss A’s evidence on Monday, Pc Dhallu was given the opportunity to speak to the panel on Tuesday.

He made allegations that Miss A had issues with drinking and had on one occasion broken his leg by stamping on it.

His defence barrister Adrian Keeling QC asked him: ‘You told the paramedics that you got the injury by tripping over a sofa?’

He replied: ‘That was the first thing I could think of.’

Pc Dhallu further alleged that Miss A had been violent towards him by hitting him.

He denied ever punching her. 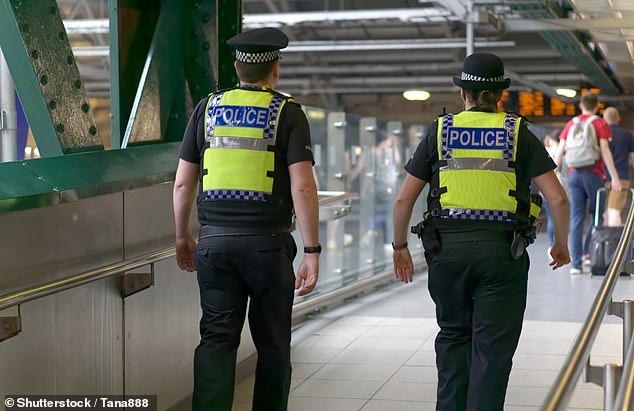 Police officers (file photo). The Kent Police officer is facing a misconduct hearing and could be sacked if the allegations against him are found to be proven

The panel earlier heard about an unintentional call to 999 during an argument.

During the call, a transcript of which was read out at the hearing, a voice believed to be Pc Dhallu’s is heard to say ‘I will smash your f****** face in’.

The other voice, believed to be Miss A, replies: ‘What, you will beat the f*** out of me?’

The other voice replies: ‘Yes I will all right.’

Asked about the call on Tuesday, Pc Dhallu said: ‘Those were horrible words and they were just said at the time… it just came out.’

Matthew Holdcroft, bringing the allegation on behalf of the police force, said: ‘Explain to the panel how a police officer telling a female that he is going to smash her f****** face in doesn’t discredit the police.’

Pc Dhallu said: ‘I don’t believe it does, it wasn’t said how it’s come out.

‘There was no thought process behind it, it was just words blurted out, they are horrible words.’

Mr Holdcroft also asked him: ‘Officer you have deliberately set out to denigrate and undermine Miss A, haven’t you?’

Mr Holdcroft added: ‘And your actions have discredited Kent Police, haven’t they?’

‘Not at all because I haven’t punched her,’ he replied.