Police in Cumbria have shown a yellow card to Scottish football fans after smashing open a secret plot to travel over the border to watch the Old Firm match in English pubs.

Thirsty Celtic and Rangers supporters planned to come over to avoid the indoor alcohol premises ban currently imposed by Nicola Sturgeon in their country.

But Cumbria Constabulary have been tipped off about the supporters’ scheme after discovering their masterplan on social media and from worried landlords.

Today Superintendent Matt Kennerley warned penalties of a non-footballing kind would be heading their way if they breached Rule of Six rules.

In a statement released by the force he said: ‘We understand restrictions on licensed premises in Scotland might offer the temptation to travel south of the border to visit our pubs and bars – but anybody breaching rules here does face a fine.

‘We would like licensees to be aware of this and to think carefully about their responsibilities and the rules in place to protect everyone. 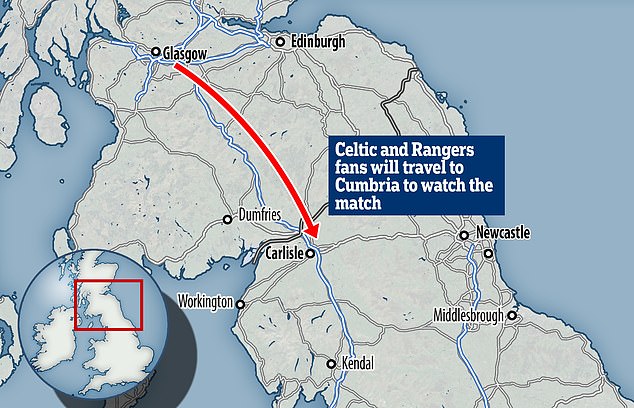 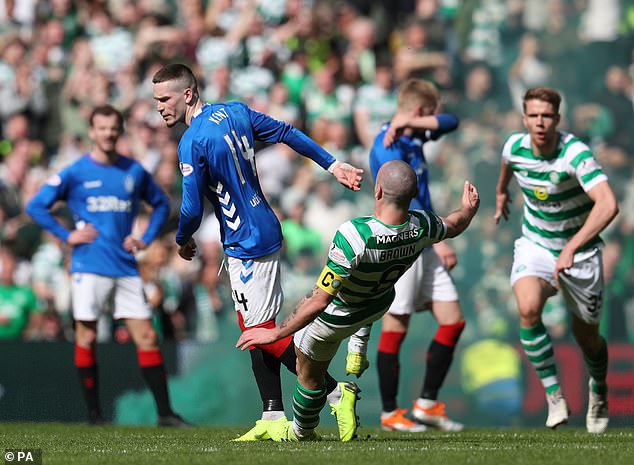 ‘For people in the central belt of Scotland, it is also important to remember the Scottish Government is asking those people to think carefully about whether they need to travel outside their local health board area.

‘Our officers will be out in town centres and busy areas to enforce breaches of the regulations.’

The Celtic v Rangers match is showing on Sky Sports on 12.30pm on Saturday and fans will be keen to get to the pub in time for kick-off.

Licensed premises in the central belt of Scotland – covering the NHS Greater Glasgow and Clyde, Lanarkshire, Ayrshire and Arran, Lothian and Forth Valley health board areas – are closed due to tighter coronavirus restrictions.

Cumbria is just 30 miles from the border and pubs in the area have already been deluged by questions over whether they are showing the game.

The town’s Gallagher’s Irish Bar put out a public message online stressing they were not airing the football.

It said: ‘We have had a lot of messages regarding the Celtic Rangers game next week!

‘We don’t have Sky Sports any more! Sorry for any inconvenience!’

One Twitter user said they thought people would travel from Galsgow to Carlisle, Cumbria

Annie Simp urged the authorities on Twitter to check people were not trying the scheme.

She said: ‘Is no one checking on folk taking train to Carlisle pubs from Glasgow to avoid lockdown.

‘And rule of 1 family means I can’t see family in house. What was wrong with 2 families.’

The Regulatory Authorities and police are closely working together to monitor the situation in Carlisle.

Supt Kennerley added: “Due to our geography and the popularity of the Lake District we get visitors from many areas every day.

“For instance, people from Cumbria and Scotland cross the border every day to go to work, shop and socialise within the permitted rules.

“But with different restrictions in place in different areas of the UK and the virus now spreading fast, we would urge anybody who does travel in any way to think carefully about their actions.

“Firstly consider if you do need to make that journey, as the more we restrict our contact the less likely the virus is to spread.

“If you do travel you must familiarise yourself with the rules in that area.

“In Cumbria, you must comply with the Rule of Six, wear face coverings on public transport and contact tracing is in place in licensed premises.

“We are also strongly advising people to limit indoor and outdoor contact with others to people from no more than two households at a time.

“Social distancing applies at all times.”

A Carlisle City Council spokesperson added: “Our priority is the safety of the pubs and rules are in place to protect everyone.

“We urge local businesses to comply with the new legal requirements or they could face getting a fixed penalty notice or prosecution.

“All employers have a legal responsibility under Health and Safety Law to assess and manage the risk of Covid-19 and protect workers and customers.

“This means businesses need to think about the risks they face and do everything reasonably practicable to minimise them.”