Pope Francis returns to not wearing a mask amid growing criticism 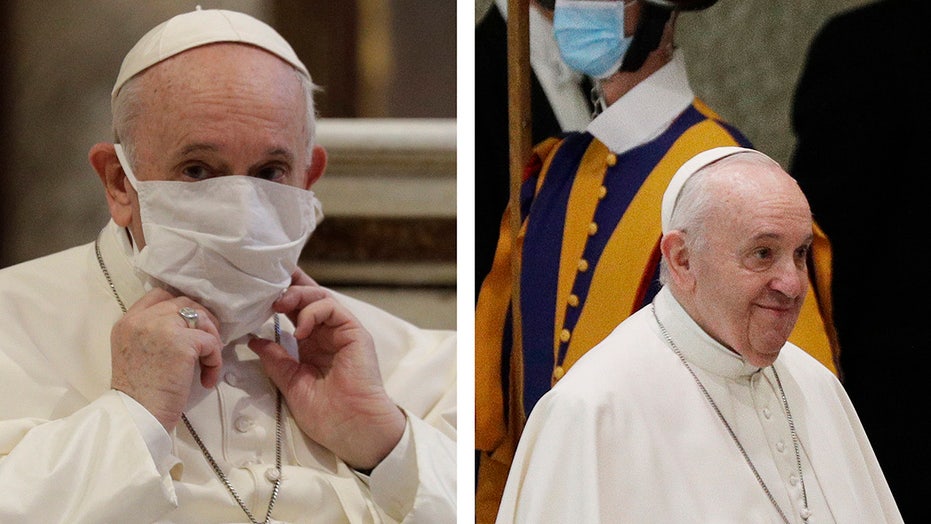 A day after donning a face mask for the first time during a liturgical service, Pope Francis was back to his mask-less old ways Wednesday despite surging coronavirus infections across Europe and growing criticism of his behavior and the example he is setting.

Francis shunned a face mask again during his Wednesday general audience in the Vatican auditorium, and didn't wear one when he greeted a half-dozen mask-less bishops at the end. He shook hands and leaned in to chat privately with each one. 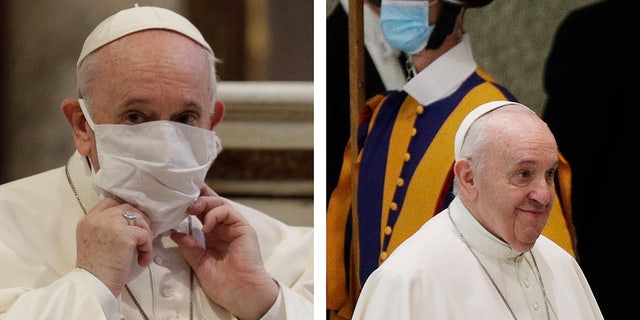 In this combo picture, Pope Francis adjusts his face mask as he attends an inter-religious ceremony for peace in Rome Tuesday, and arrives for his general audience at the Vatican without mask Wednesday, Oct. 21, 2020.  (AP Photo/Gregorio Borgia)

While the clerics wore masks while seated during the audience, all but one took his mask off to speak to the pope. Only one kept it on, and by the end of his tete-a-tete with Francis, had lowered it under his chin.

Vatican regulations now require face masks to be worn indoors and out where distancing can’t be “always guaranteed.” The Vatican hasn’t responded to questions about why the pope wasn’t following either Vatican regulations or basic public health measures to prevent COVID-19.

Francis has faced sharp criticism even from his most ardent supporters and incredulousness from some within the Vatican for refusing to wear a mask. 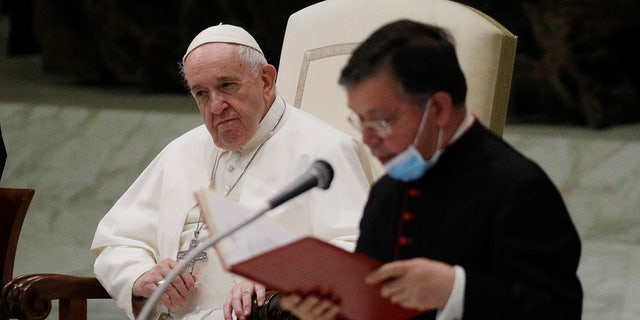 Pope Francis listens to a priest introducing the group of faithful attending the weekly general audience in the Paul VI hall at the Vatican, Wednesday, Oct. 21, 2020. (AP Photo/Gregorio Borgia)

Just this week, the Vatican expert and columnist, the Rev. Thomas Reese, wrote a blistering, tough-love open letter to the pope offering him six reasons he should wear a mask and urging like-minded faithful to troll the pope’s @Pontifex Twitter feed to shame him into setting a better example.

“You’re the boss; you should follow your own rules,” Reese wrote. “When the clergy hold themselves above the rules, we call that clericalism, a sin that you have loudly denounced."

At the start of his audience Wednesday, Francis explained to the faithful why he didn't plunge into the crowd as he usually would do. But he said his distance from them was for their own well-being, to prevent crowds from forming around him.

“I’m sorry for this, but it’s for your own safety," he said. “Rather than get close to you, shake your hands and greet you, I greet you from far away. But know that I’m close to you with my heart." 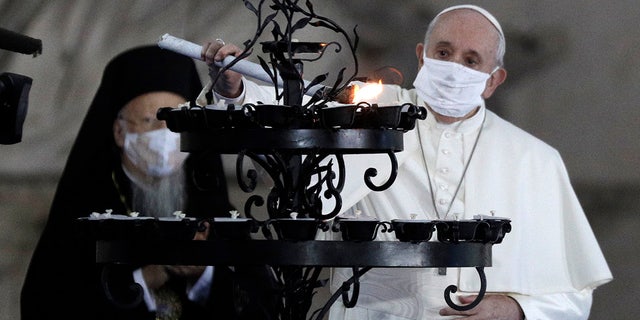 Pope Francis lights a candle for peace during an inter-religious ceremony for peace in the square outside Rome’s City Hall, Tuesday, Oct. 20, 2020 (AP Photo/Gregorio Borgia)

He didn't address his decision to forego wearing a mask.

Francis did, however, wear a white face mask throughout an interreligious prayer service in downtown Rome on Tuesday, removing it only to speak. He had previously only been seen wearing one once before as he entered and exited his car in a Vatican courtyard on Sept. 9. Italian law requires masks indoors and out.

At 83 and with part of a lung removed when he was in his 20s due to illness, the pope would be at high risk for COVID-19 complications. He has urged the faithful to comply with government mandates to protect public health.

In the past week, 11 Swiss Guards and a resident of the hotel where Francis lives have tested positive. All told, the Vatican City State has had 27 cases, according to the Johns Hopkins University running tally.

In Italy, the one-time European epicenter of COVID-19, coronavirus cases are surging, with the Lazio region around Vatican City among the hardest hit. Lazio has more people hospitalized and in intensive care than any other region except Italy’s most populous and hardest-hit region, Lombardy.

Inside the Vatican auditorium Wednesday, the crowd wore masks as did the Swiss Guards. But Francis, his two aides and some of the protocol officials didn't. 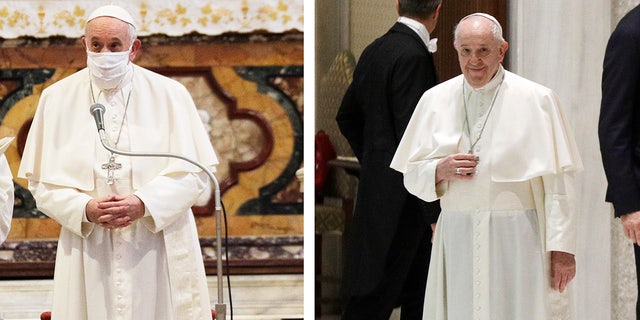 In this combo picture, Pope Francis attends an inter-religious ceremony for peace wearing a face mask in Rome Tuesday, and arrives for his general audience at the Vatican without mask Wednesday, Oct. 21, 2020. A day after donning a face mask for the first time during a liturgical service, Pope Francis was back to his mask-less old ways during his general audience at the Vatican despite surging coronavirus infections across Europe. (AP Photo/Gregorio Borgia)

In his open letter to Francis, which Reese said was a “fraternal correction” from a fellow Jesuit, the American noted that Francis was trained as a scientist, and should know to trust the science on virus protection. He urged Francis to be a good Jesuit and obey doctors and the Vatican’s own mask mandates.

Saying Francis’ decision to forego a mask was a sin, Reese urged Francis to set a better example to others and avoid being lumped in the same camp as COVID-19 negationists and mask-averse U.S. President Donald Trump, with whom Francis has clashed.

“Do you really want to be in company with a man who builds walls rather than bridges, who demonizes refugees and immigrants, who turns his back to the marginalized?” Reese asked. “I don’t think so, but that is where you are as long as, like Trump, you do not wear a mask."

Reese's campaign was having an effect. Dutch Catholic theologian Hendro Munsterman tweeted his anger at @Pontifex, writing: “How do we tell our kids to protect themselves and others if you cannot even give an example?"