A Sydney defamation barrister at the centre of a Federal Court battle to stop her acting for federal Liberal minister Christian Porter in his defamation case against the ABC has denied breaching her professional duties by acting for him after previously giving advice to a potential witness in the case.

In a statement filed in the Federal Court ahead of a three-day hearing starting on Monday, Sue Chrysanthou SC says she gave advice to Jo Dyer, a friend of the woman who accused Mr Porter of rape, on November 20 last year and on January 27 and 28.

The woman took her own life last year after advising NSW Police that she did not wish to pursue her complaint. 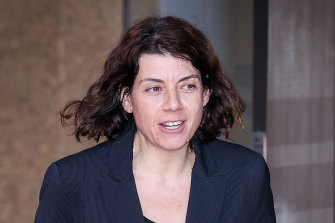 Mr Porter denies the allegation and is suing the ABC for suggesting he raped the woman in the late 1980s, when they were both teenagers, in an online story earlier his year referring to a rape allegation against an unnamed cabinet minister.

Ms Dyer has filed urgent proceedings to stop Ms Chrysanthou acting for Mr Porter on the basis that “the order is necessary to prevent prejudice to the proper administration of justice, and to preserve confidentiality and legal professional privilege”.

The high-profile defamation silk says she advised Ms Dyer as a favour to her colleague and friend, defamation barrister Matthew Richardson.

She says she did not issue an invoice for the advice and did not agree to act in any proceedings for Ms Dyer.

She says she gave an undertaking on April 26 that she would not cross-examine Ms Dyer or the woman’s former boyfriend, Macquarie banker James Hooke, who attended a November 20 conference with Ms Dyer in Ms Chrysanthou’s chambers in Phillip Street, should they become witnesses in the Porter defamation proceedings.

The statement says Ms Chrysanthou “is of the view that, by reason of the cab rank rule, she is prevented from returning the brief for [Mr] Porter”. The cab rank rule limits the circumstances in which a barrister can refuse to act for a potential client.

The Australian has reported Ms Chrysanthou was advising Ms Dyer in relation to an article by a columnist at the masthead, Janet Albrechtsen. The article was published after Ms Dyer appeared in an ABC Four Corners broadcast late last year. The rape allegation was not aired as part of that program.