Imaginative play at childcare can equip children with skills they need to thrive academically at school.

Children who took part in narrative-based, role-playing activities known as Playworlds were shown to have improved executive functions, the skills that allow people to organise and self-regulate, according to new research from Monash University and Queensland University of Technology.

Conducted in two Melbourne preschools with almost 100 participants, the research showed children performed challenging tasks while playing and developed their cognitive functions including planning, memorising and focussing on a goal. 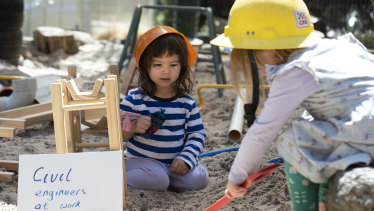 Monash University Laureate Professor Marilyn Fleer, who led the study, said all of the skills would be vital when the children reached school.

“It makes a big difference and the gains made continue into school and beyond; we know it works and that they hit the ground running,” she said.

“They want to be like every other child listening and sitting still et cetera, but if they have to focus on that they can’t focus on the curriculum, there’s no space left,” she said.

“You can see the school failure happening over time because students are so focused on behaviour instead of the joy of learning.”

The Playworlds model was developed with early childhood educators to make it easy for them to do in their classrooms. The reliance on imagination and lack of props or expensive resources also make it accessible regardless of a preschool’s socioeconomic status.

“The long-standing research is out there. We know that investing in early childcare matters.”

Calls for universal free childcare are mounting as Australia begins to repair the economic damage of the coronavirus pandemic.

Billionaire philanthropist Nicola Forrest and Thrive by Five chief executive Jay Weatherill addressed the National Press Club this month to push for an overhaul of the childcare system.

“High-quality early learning centres should be a basic human right for every single Australian kid, no matter their postcode and regardless of whether both or neither parent works. It’s about uniformity, consistency and equality of access,” Ms Forrest said.

Helen Gibbons, director of early education and care for the United Workers Union, said she was pleased to see increasing momentum to change the system to improve things for children, their families and educators.

“A lot of voices are coming together now,” she said. “We need to be opening up barriers for children to access high-quality environments.”

Ms Gibbons said the government needed not only to make childcare more financially accessible for families but also improve the structural issues faced by staff, such as low pay and insecure work.

“The COVID-19 crisis really highlighted what an enormous crisis there was in the early education workforce,” she said. “It showed us the government can do direct intervention when it wants to.”