Several health experts are urging the Victorian government to embrace rapid antigen testing for coronavirus, arguing that the technology is cheap, improving in accuracy and could help keep borders open and strengthen hotel quarantine.

One leading Australian manufacturer of the 15-minute tests says the public health policy around the technology is “dogmatic and not flexible”, criticising the government for relying on lab-based pathology without proper consideration of other testing strategies being used overseas. 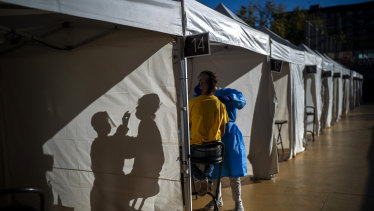 A volunteer takes a rapid antigen screening test in Barcelona in December.Credit:AP

Rapid antigen tests are relatively inexpensive compared to the common PCR tests (the nasal and throat swabs), however, results are less accurate. A total of 19 rapid antigen tests have been approved by the Therapeutic Goods Administration.

There are hopes the rapid antigen tests could be used in conjunction with PCR tests to help reopen workplaces, businesses and borders.

But John Kelly, chief executive of Atomo Diagnostics, which produces the tests, says health departments have been reluctant to publicly recommended them despite their widespread use overseas.

“Our concerns are that the public policy at the moment is very dogmatic and not flexible and not really evolving with the pandemic as it changes,” he said.

Mr Kelly said there was “only one voice at the table and that’s the pathologists”.

“They're default position is lab-based pathology because that's their business model and that's their experience so I think there's not a breadth of conversation … I just think it's a lack of willingness to really openly discuss it.

“It’s almost a monopoly in Australia in terms of the provision of testing.”

Mr Kelly said Atomo tests, which are approved by the TGA, are about 90 per cent accurate, while accuracy for PCR tests is in the high-90s.

“From our perspective we're not saying you have to use Atomo tests, what we are saying is there really needs to be mature conversation around what's the best combination of testing to manage this rapidly moving pandemic.”

Antigen tests detect proteins on the surface of a virus and are usually administered by a medical professional who swabs the back of a person's nose or throat.

The sample is then mixed in a solution that frees proteins from the virus, with the results showing up on a test slide coated with antibodies. Some companies are creating antigen tests that can be used at home, similar to a pregnancy test.

The performance of rapid antigen tests is currently being evaluated by the Doherty Institute for the Victorian government, with results from the field trials to be delivered in the next month, a Health Department spokeswoman said.

Melbourne doctor Peter Lewis has been attempting to persuade the Victorian government of the benefits of antigen tests for more than a month.

“We have a major laboratory pushback to antigen testing,” he said. “Anyone associated with a laboratory is saying that PCR is the gold standard and that's absolutely true, but if you're a doctor like me and you're treating patients, you want a test that allows you to rapidly separate people who are infected from those who aren't." 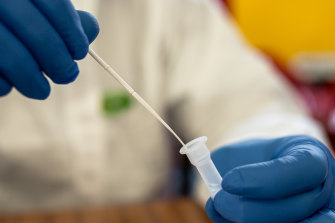 Rapid antigen tests are relatively inexpensive compared to the common PCR tests (the nasal and throat swabs), however results are less accurate.Credit:Getty

He said that rapid antigen tests could be used to test hotel quarantine workers.

“We have to improve our testing situation and this will help identify the quarantine worker who is heading home and could potentially spread the virus to her family and beyond,” he said.

“Everybody, particularly quarantine staff and travellers can be tested on a daily basis with an antigen test. And of course, if they test positive you follow up with a PCR.”

The NSW government recently announced that rapid antigen testing will be conducted every day for personnel working in quarantine from January 21, after sustained pressure from epidemiologists and infectious diseases experts.

Dr Lewis said he believed the reluctance to embrace antigen testing was the result of "massive lobbying" by the big pathology companies.

Dr Michael Dray, president of the Royal College of Pathologists of Australasia, said that governments make advice based on consultation with many groups of experts in addition to pathologists.

He said that there is an increased chance of false positive and false negative results with antigen testing, and given the low case numbers of COVID-19 in Australia, the RCPA advises against the widespread use of rapid antigen tests.

“More evidence is needed on real-world performance and operational aspects of rapid antigen tests and the RCPA supports the work the government is taking in this area,” he said.

Deakin University chair of epidemiology Catherine Bennett said the tests could have a place in Australia’s testing regime in conjunction with PCR testing, in settings such as workplaces or hotel quarantine.

“I only think antigen testing should be used for rapid testing and repeat testing – most settings you can wait half a day or a day for a result,” she said.

“If someone has been in quarantine or isolation because they had the virus, you don’t want to send them home on the strength of an antigen test when you can wait half a day.”

She said the Victorian government was taking a cautious approach to new testing methods.

“I don’t think the government is averse to considering things outside routine pathology but here in Victoria we do have a very cautious approach and so stepping away from a reliable test to one that’s less sensitive has to have its own argument around it.”

Australian Tourism Industry Council chief executive Simon Westaway said that the rapid antigen test should “come into its own” in Australia in 2021 and needed to be part of authorities’ response, particularly around the management of borders.

A Victorian Health Department spokesman said that they were “always open to new methods of testing, once the correct research and procedures have taken place to ensure their accuracy and efficiency”.

“The Victorian government continues to invest in new research with the Doherty Institute to develop more local data and evidence for use in the Victorian context, including trials to help determine if antigen and rapid molecular tests may play a role in screening and rapidly triaging high-risk cohorts to complement existing PCR testing capacity.”

Australia’s Chief Medical Officer Paul Kelly said several weeks ago that some of the antigen tests registered with the TGA are “very good”, but the gold-standard was PCR testing.