A RACIST who joked about kneeling on his pals neck days after the murder of George Floyd has been hounded out of his home.

Jordan McGhie, 27, sparked outrage by posing for a picture kneeling on his friend's neck in the days after Mr Floyd was murdered by a police officer. 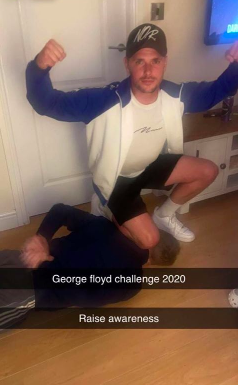 The image of McGhie went viral after he posted it on social media and led to threats being made towards the roofer.

Dundee Sheriff Court was told today that McGhie had been forced to move home because the image went viral and caused a furious public reaction.

Solicitor Lee Qumsieh, defending, said: "His position is that there was a challenge going round on social media – on Instagram – involving similar images to the one you have seen.

"He had been with a friend consuming alcohol and saw the post.

"His position is that he did know the George Floyd scenario and knew roughly what it was about.

HOUNDED OUT OF HOME

"He knew it involved someone dying in police custody, a black man who had died at the hands of the police, but he had not seen the original video.

"He saw this challenge and foolishly decided to take part. He posted the image in question.

"Immediately his social media accounts met with a significant backlash from members of the public, which included threats of violence towards him.

"Given the reaction he then looked at the video. When he saw it he was devastated by what he posted and immediately took it down from social media." 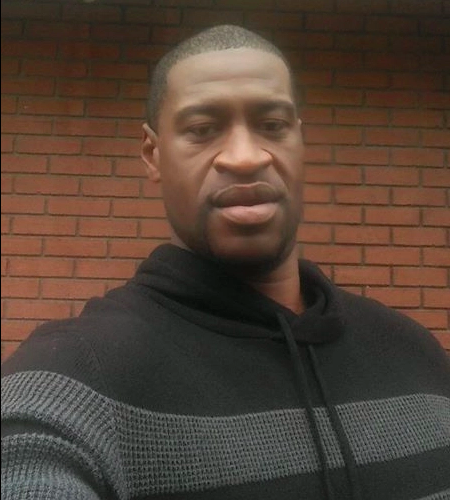 Mr Qumsieh told the court: "He had to close all of his accounts and is still not back on Facebook.

"It has had further repercussions for him. He has had to relocate and has moved to a different part of Fife because he was getting so much grief and abuse because of this.

"He was very close to losing his employment.

"His employer eventually stood by him. He was candid with the police and was extremely remorseful.

"He appears full of regret, is ashamed of his behaviour and embarrassed and is every sorry if he has offended anyone, which he clearly did, given the reaction of the public."

Jordan McGhie's SnapChat post of him kneeling on his friend's neck to imitate the killing of Mr Floyd in the USA quickly went viral after being posted online.

Several people called the police to report the image of McGhie posing with his friend Danny Carstairs after it appeared on a Facebook news feed.

McGhie admitted acting in a racially aggravated manner by sending an offensive and racist image from his friend's house in Fife on 2 June last year.

He admitted breaching the 2003 Communications Act by posting an image on social media which was "grossly offensive, indecent, obscene or of menacing character." 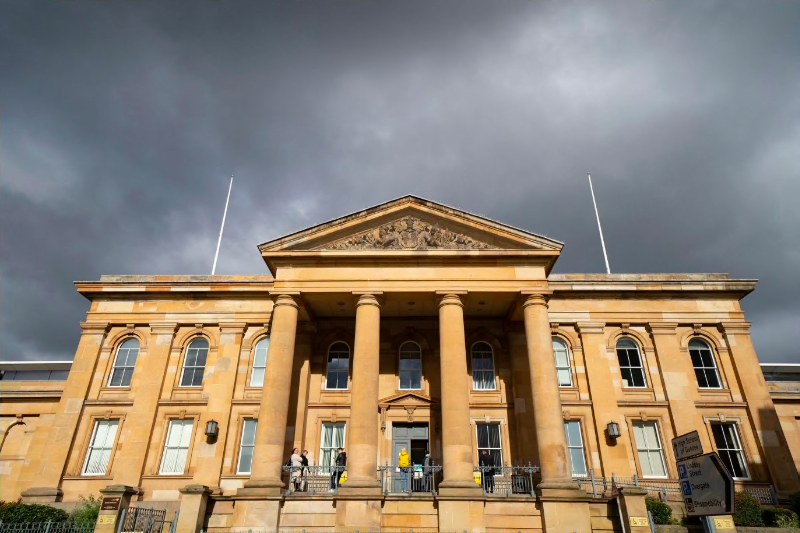 Fiscal depute Kerrie-Anne MacKenzie told the court: "At 7pm on 2 June 2020 a witness came across a photograph along with a message saying 'out your local racist.'

"The photograph which had drawn their attention showed the accused kneeling on another male's neck, imitating the death of George Floyd."

The shocking image showed Mr Carstairs lying face down on the floor with his hands behind his back, with McGhie kneeling over him with one knee on his neck.

McGhie – who has a previous conviction for a racist offence – is seen triumphantly holding his hands up in the air in the photo taken at Mr Carstairs home in Crossgate, Cupar.

The image was posted a week after the death of Mr Floyd in Minneapolis sparked a global protest under the Black Lives Matter banner.

Police officer Derek Chauvin, who was filmed kneeling on Mr Floyd's neck for nine minutes 29 seconds as he pleaded to be released, has since been found guilty of his murder.

Sheriff Gregor Murray placed McGhie on a structured deferred sentence yesterday for him to be of good behaviour and for further information from social workers.

He warned McGhie that he could still be sent to prison for the offence and told him: "You are nowhere near out of the woods yet."

McGhie's image went viral within minutes of being posted after horrified recipients took screenshots and a number of them passed it on to police.

The original post was quickly deleted but not before McGhie was subjected to an angry backlash online from people offended by the racist stunt.

One said: "Wow, how low can you get? Scumbag needs a kicking or some jail time for that."

A second said: "Utter scum. Being scum like this takes a lifetime commitment to being pure scum."

And another wrote: "Absolutely disgusting behaviour. Police must do something about this."

He has previous convictions for assault to injury and for a racist offence in 2011.

He was 17 when he subjected a 13-year-old boy to a tirade of drunken abuse on a bus traveling between St Andrews and Cupar.

In that case, McGhie admitted acted in a racially aggravated manner, using offensive language and causing alarm and distress.

Sheriff Charles Macnair gave McGhie a one-year community payback order, including a condition that he carry out 160 hours of unpaid work.

He was also ordered to pay £300 compensation.