A Spanish rapper due to begin a controversial nine-month jail sentence barricaded himself inside a Catalan university to avoid arrest on Monday.

Pablo Hasel, who is known for his radical leftist views, has been convicted for  glorifying terrorism, slander and libel after he attacked the monarchy and accused police of killing and torturing immigrants in a string of tweets.

The musician, who refused to turn himself in, had been locked inside the campus in Lerida near Barcelona with ‘about 20 supporters’, the university said. 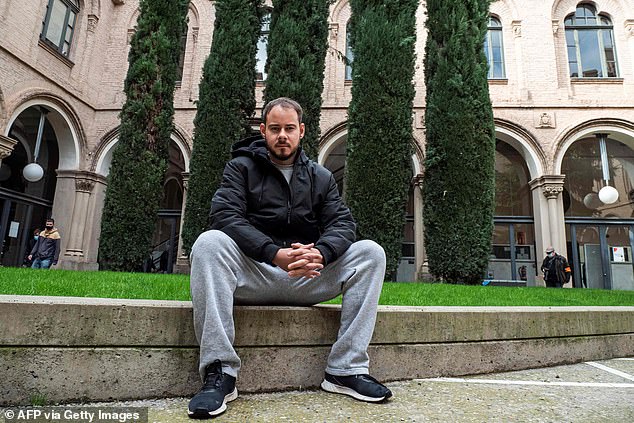 Pablo Hasel (pictured today), a Spanish rapper due to begin a controversial nine-month jail sentence, barricaded himself inside a Catalan university to avoid arrest on Monday 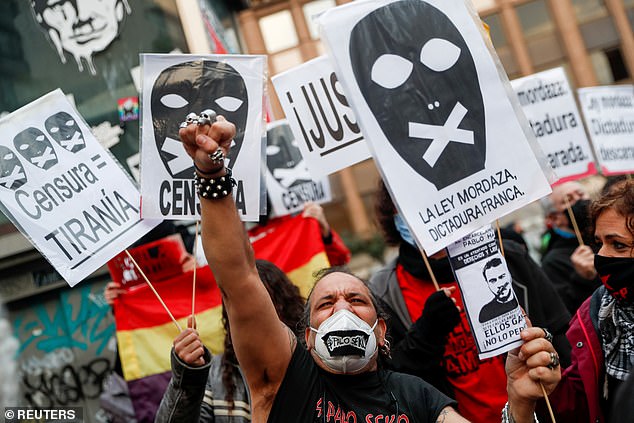 FILE: A supporter of Spanish rap singer Pablo Hasel gestures during a protest, after Hasel was sentenced for glorifying terrorism and insulting the crown in Madrid, Spain, on February 6

Hasel, whose real name is Pablo Rivadulla, was given until Friday night to turn himself in to begin serving his sentence imposed in 2018 under a security law known in Spain as the ‘gag law’.

He was found to have encouraged violence and insulted the monarchy for his lyrics and tweets, which included references to banned guerrilla groups, compared a court to Nazis and called former king Juan Carlos a mafia capo.

Hasel’s case sparked demonstrations in Madrid and Barcelona with his supporters protesting against the rapper’s jailing.

Hasel has previously said that he will not turn himself in.

‘I refuse to go of my own accord and knock on the prison door so they’ll just have to come and kidnap me,’ he told AFP on Friday. 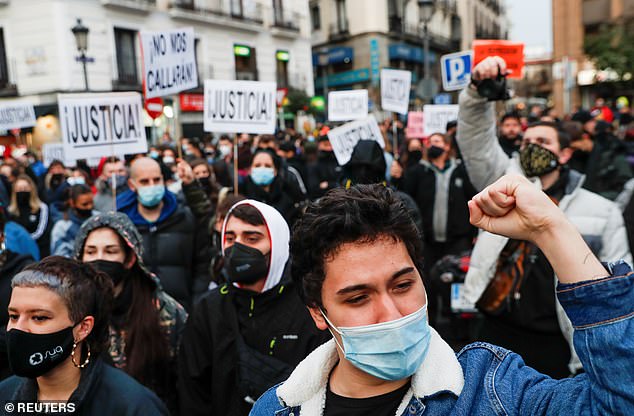 Supporters of Spanish rap singer Pablo Hasel take part in a protest, after Hasel was sentenced to jail time on charges of glorifying terrorism and insulting the crown in Madrid on February 6

In a tweet on Monday, Hasel told his followers that he had barricaded himself inside a Catalan university to avoid his arrest.

‘I’m locked inside the University of Lleida with quite a few supporters so they’ll have to break in if they want to arrest me and put me in prison,’ the rapper said.

A spokeswoman for the university in Lerida, which lies 150 kilometres (90 miles) west of Barcelona, confirmed Hasel was at the city centre campus with a group of ‘about 20 supporters’, but said the situation was calm and the police were not involved.

Last week, Spain’s government pledged to reduce the penalty for ‘crimes of expression’ such as the glorification of terrorism, hate speech, insults to the crown and offences against religious sensibilities, in the context of artistic, cultural or intellectual activities.

Government spokeswoman Maria Jesus Montero said that in response to the Hasel case, the government had ‘expressed its willingness to provide a much more secure framework for freedom of expression’.

The reform was in its early stages, she said. 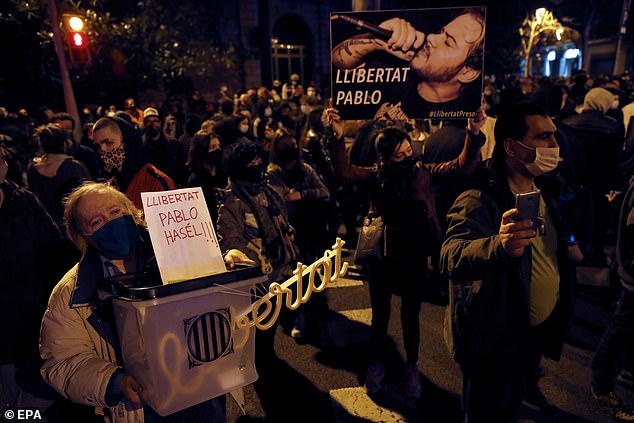 Dozens of people take part in a protest in front of the Spanish Government’s headquarters to condemn the imprisonment of Spanish rapper Pablo Hasel on January 30, 2021

In a statement, the leftist coalition government said the reform would introduce milder penalties rather than prison, and target only actions that ‘clearly involve the creation of a risk to public order or provoke some kind of violent conduct’.

Hasel said in a tweet the government was doing nothing to prevent his imprisonment.

‘With empty declarations like so many other false promises, they want to extinguish solidarity,’ he wrote.

The 2015 law was enacted by a previous, rightwing government, which said it was needed to prevent the glorification of banned armed groups such as the Basque separatists ETA.

It bans speech not only for glorifying violence, but also for insulting religions or the monarchy.

Opponents say it has been applied far too restrictively, imposing criminal penalties on legitimate criticism of the state.

Amnesty International says around 70 people were convicted under the law in 2018 and 2019.

Hasel’s case echoes that of another rapper called Valtonyc who fled to Belgium in 2018 after being convicted of similar crimes.

Spain is trying to have him extradited but Belgium has refused on grounds that his offences are not a crime under Belgian law.