Two historic and very rare gold coins thought to have been lost in the Black Death has been found by a metal detectorist.

The 23-carat gold coin, called a leopard was found alongside an Edward III golden coin near Reepham, Norfolk.

The leopard was withdrawn within months of it being minted in 1344 and according to finds liaison officer Helen Geake, hardly any of the coins have survived. 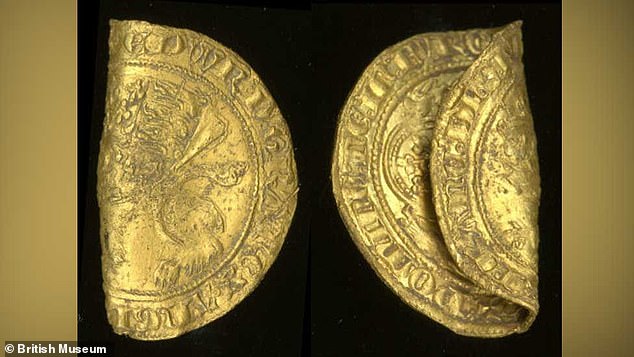 The coins were discovered by a metal detectorist in Reepham, Norfolk in October 2019

The coins would be worth the equivalent of £12,000 in terms of today’s currency, and would have been owned by someone ‘at the top of society’, she told the BBC.

‘For some reason, they didn’t catch on, but when one or two pennies were the equivalent of a day’s wages at today’s minimum wage rate, perhaps very few people used them,’ she said.

Called a florin, leopard and a helm, the coinage was an attempt by King Edward III to produce a gold coin suitable to be used in Europe as well as in England.

But, the gold used to strike the coins was overvalued, which resulted in them being unacceptable to the public.

Within months, they were melted down to produce the more popular gold noble, worth six shillings and eight pence.

The coin was discovered alongside a rare Edward III noble, thought to date between 1351 and 1352, while the bubonic plague, known as the Black Death, was ravaging Europe.

Coins have been used as a form of currency in Britain since the second century BC as a result of trade between the Celtic tribes in Britain and Gaul.

When the Romans began its subjugation of Britain in 43AD, Celtic coinage came to an end and Roman coins were used, mostly imported from the continent.

In 973 AD, Edgar became the first king of a United England and every new coin in England was issued in his name at one of around seventy mints active in the country.

From 1247, Henry III introduced the ‘long cross’ design, as seen on the reverse of this coin, in a bid to discourage ‘clipping’ – shaving the edges of coins without it being noticeable.

In order to achieve this, he instituted a great recoinage and melted down huge quantities of the old ‘shortcross’ designs on pennies dating back to Anglo-Saxon times so that they could be reminted.

Plague is an infectious disease caused by the bacterium Yersinia pestis, which is carried by fleas and transmitted between animals.

The bubonic plague – the most common form – is caused by the bite of an infected flea and can spread through contact with infectious bodily fluids or contaminated materials.

Patients may show signs of fever and nausea and at an advanced stage may develop open sores filled with pus.

It devastated Europe in the Middle Ages, most notably in the Black Death of the 1340s which killed a third or more of the continent’s population.

After the Black Death plague became a common phenomenon in Europe, with outbreaks recurring regularly until the 18th century.

When the Great Plague of 1665 hit, a fifth of people in London died, with victims shut in their homes and red crosses painted on the door.

Bubonic plague has almost completely vanished from the rich world, with 90 per cent of all cases now found in Africa.

It is now treatable with antibiotics, as long as they are administered quickly.

Still, there have been a few non-fatal cases in the U.S., with an average of seven reported a year, according to disease control bosses.

Some plague vaccines have been developed, but none are available to the general public.

The WHO does not recommend vaccination except for high-risk groups such as health care workers.

Without antibiotics, the bubonic strain can spread to the lungs – where it becomes the more virulent pneumonic form.

Pneumonic plague, which can kill within 24 hours, can then be passed on through coughing, sneezing or spitting.

The coins were thought to be lost after the Norman Conquest, as the only coins in circulation were silver pennies.

Dr Geake said no one really knows why Edward III decided to reintroduce the first gold coins in England since the Anglo-Saxon era. 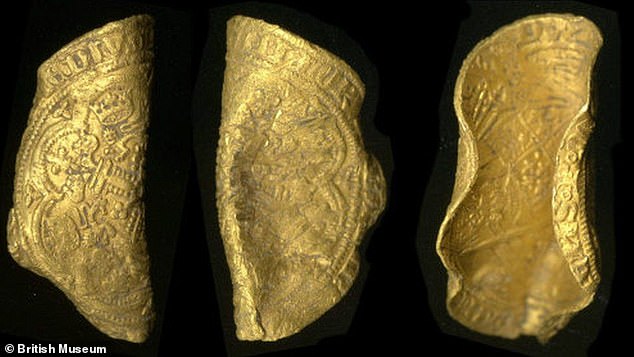 The coin was discovered alongside a rare Edward III noble, thought to date between 1351/52

The find shows that the leopard, worth three shillings at the time, was in circulation for longer than historians have previously believed.

But, after looking at the circumstances at the time, they realised that it coincided with the Black Death reaching England in 1348 – a ‘cataclysmic’ event which saw coinage issues drop in priority.

‘Usually the authorities would be keen to remove a withdrawn coin as soon as possible,’ Dr Geake said.

The coins were discovered by a metal detectorist in October 2019.