Lockdown hammered the High Street in November as retail sales tumbled by 3.8 per cent but online shopping surged by 75 PER CENT year-on-year as people brought forward their Christmas gift buying

Coronavirus lockdown rules hammered the UK High Street in November as retail sales dropped by 3.8 per cent when compared to October.

Clothing stores were the hardest hit as sales plummeted by 19 per cent while the sale of fuel also tumbled by 16.6 per cent as families stayed at home.

However, online shopping surged by 74.7 per cent year-on-year as businesses said people had brought forward their Christmas shopping.

Supermarkets and household goods stores were the only two physical retail sectors to see growth in monthly sales in November.

The former saw a 3.1 per cent surge largely because of the closure of restaurants and pubs while the latter was aided by a continuing uptick in DIY during the coronavirus crisis as sales went up by 1.6 per cent when compared to October. 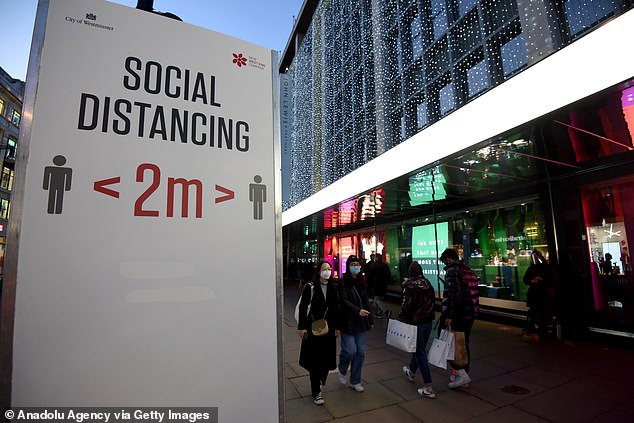 High Streets across the UK were hit hard during November as non-essential shops were forced to close. Oxford Street in central London is pictured on December 15 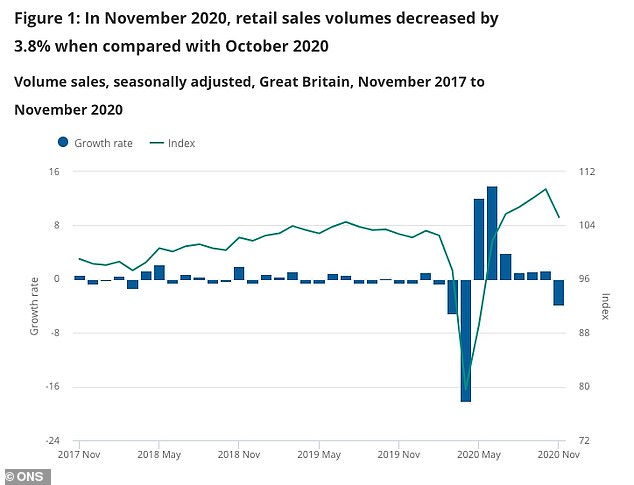 Data published today by the Office for National Statistics showed retail sales fell by 3.8 per cent in November

Restrictions on non-essential shops were in place for much of November as the UK tried to slow the spread of Covid-19.

Data published today by the Office for National Statistics revealed that retail sales dropped by 3.8 per cent last month when compared to October.

However, despite the monthly fall, overall retail sales were still above their pre-pandemic levels.

Year-on-year retail sales growth increased by 2.4 per cent in November with businesses reporting that locked down consumers had decided to start their Christmas shopping earlier than normal.

The retail sector had experienced a period of recovery in the run up to November after coronavirus curbs were eased over the Summer.

But the reimposition of tougher restrictions prompted a ‘strong rate of decline’ last month, according to the ONS.

Retailers said the enforced closure of stores had a big impact on turnover despite an increase in online sales.

Online shopping accounted for 31.4 per cent of total retailing in November, compared to 28.6 per cent in October.

The ONS said there had been a 74.7 per cent overall growth in online shopping when compared to November 2019.

Increased interest in DIY during the pandemic appears to have continued in November as household goods stores reported sales growth of 1.6 per cent on October, with overall sales now 15.2 per cent higher than in February this year.

Jonathan Athow, deputy national statistician for economic statistics at the ONS, said: ‘After a run of strong growth, retail sales fell back in November as restrictions meant many stores had to close their doors again.

‘Clothing and fuel were particularly hit by the winter lockdown, with their sales falling sharply. 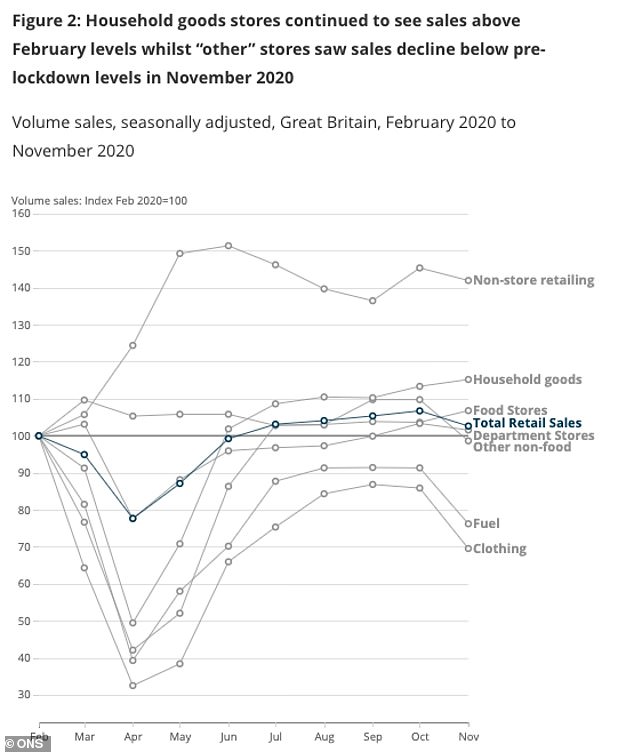 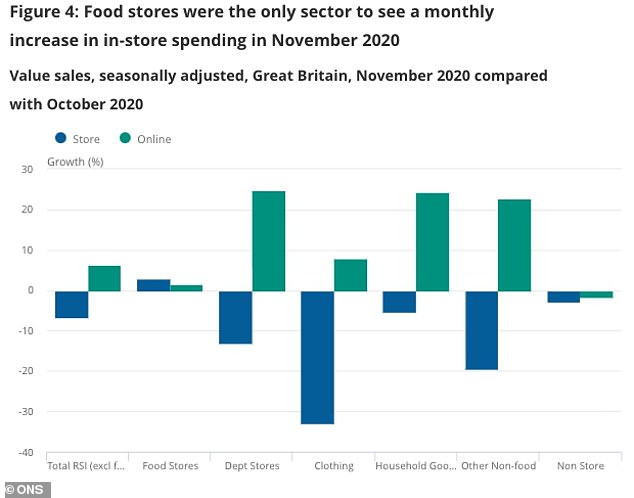 ‘Household goods and food shops were the only areas to see their monthly sales increase, with feedback from stores suggesting consumers brought forward their Christmas spending, particularly on festive home products and DIY.

‘Food sales, especially click and collect, were boosted as people were not able to eat out.’

‘Physical shops are hoping to catch up on trading in the remaining festive period – where possible – and many retailers are under acute pressure.

‘Retailers need to think about the longer term and evolve to meet seemingly permanent changes in consumer habits.’