THE statue of scouts founder Robert Baden-Powell will be protected by 24-hour security after a huge backlash to the council's plan to pull it down.

This comes as the statue of Thomas Guy, the founder of Guy's Hospital, is set to be removed due to his association with slave-trading. 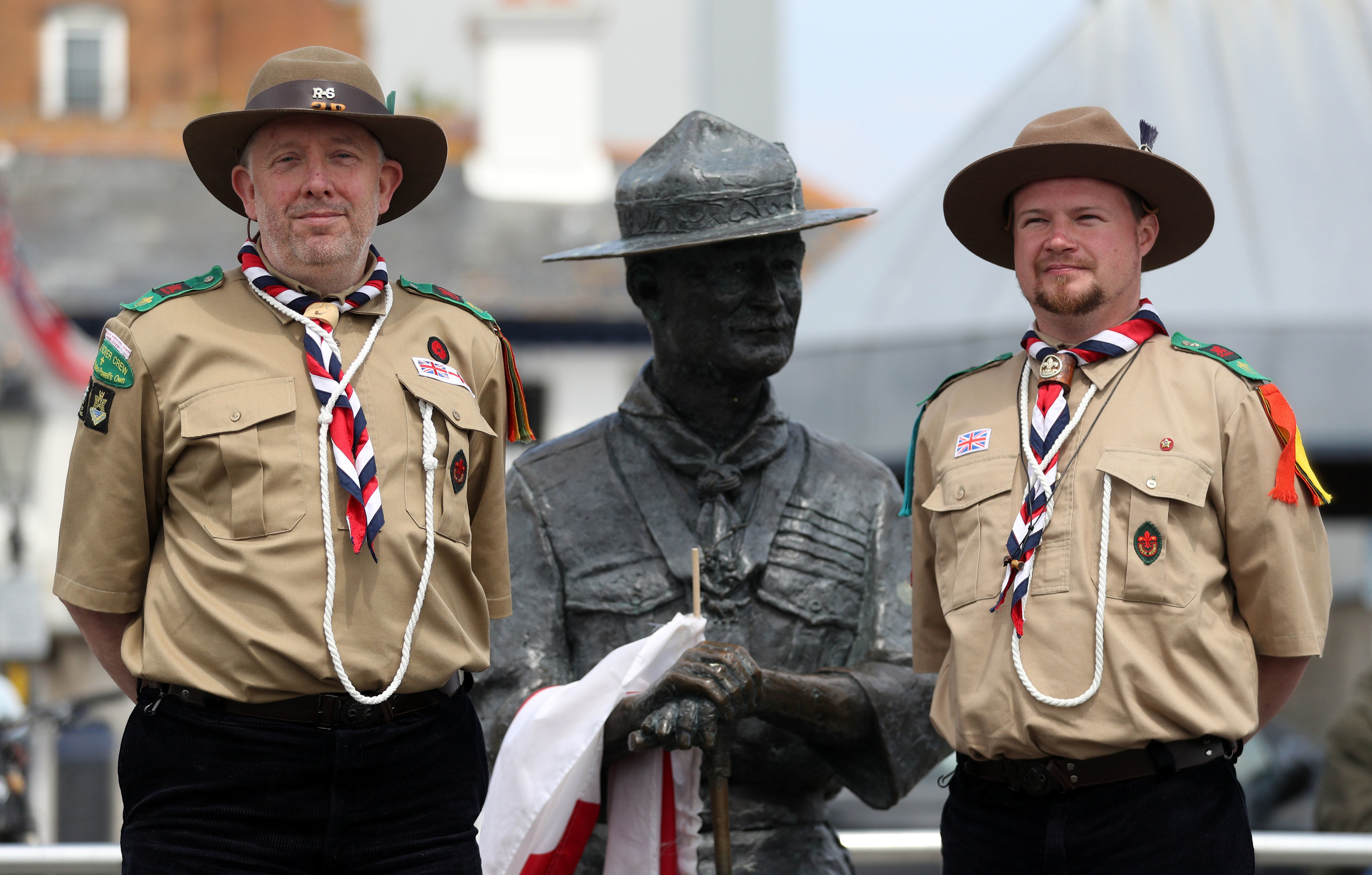 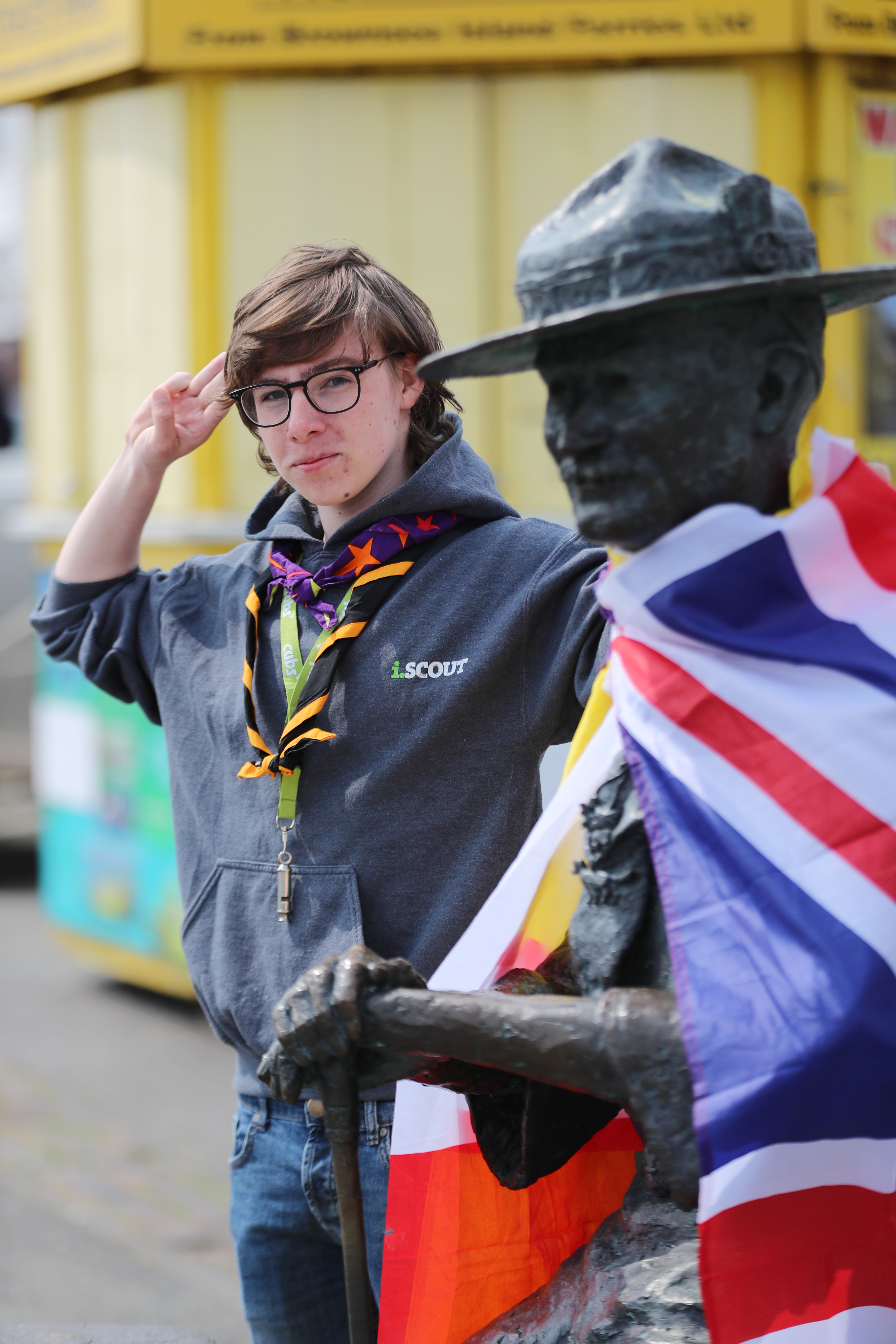 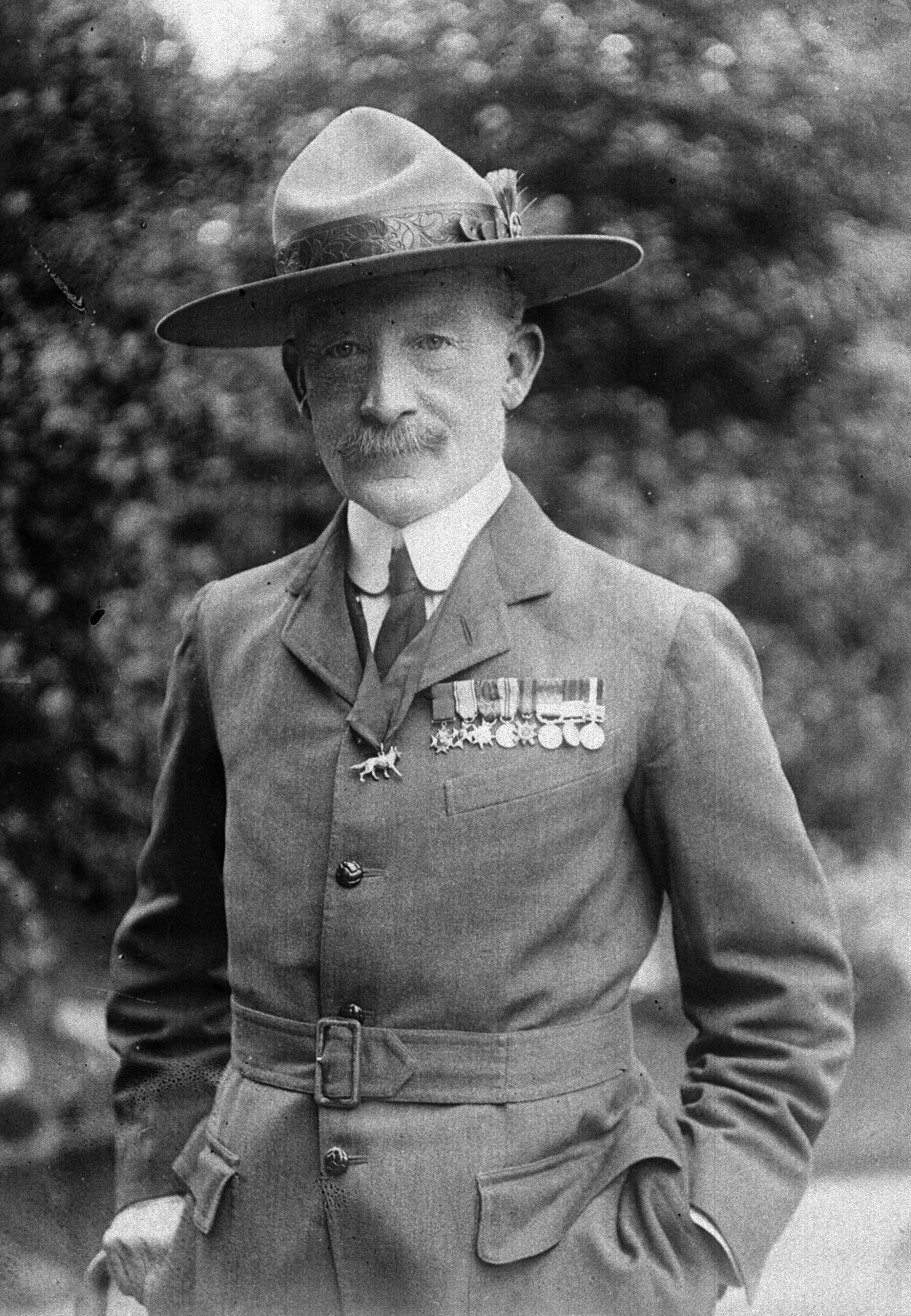 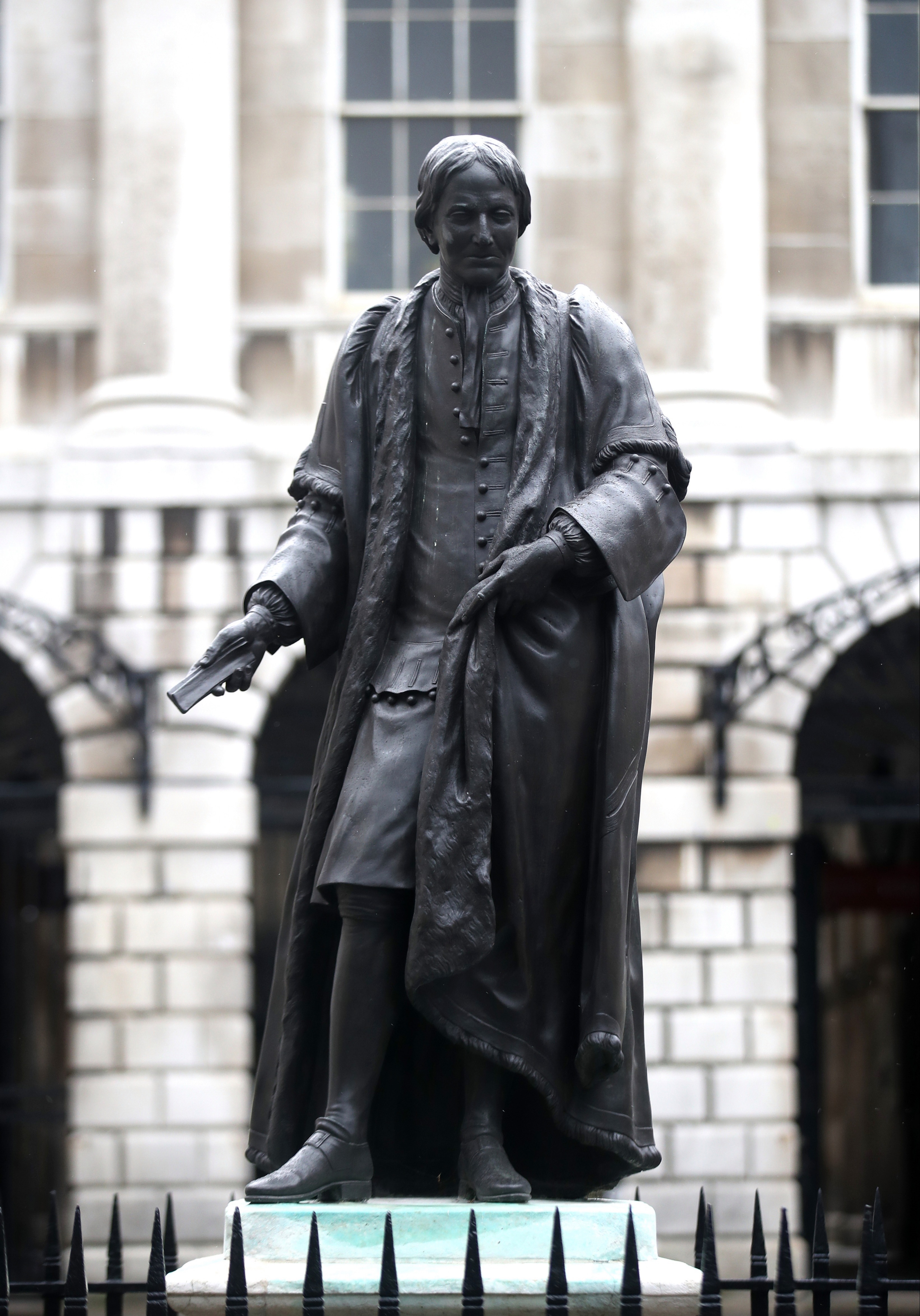 Lord Baden-Powell was honoured with the memorial in Poole, Dorset, 12 years ago – with critics now calling for it to be pulled down over concerns he was racist, homophobic and a supporter of Adolf Hitler.

Deputy leader of the council, Mark Howell, was notified by Dorset Police of the possible threat to the statue earlier this week.

It was then decided that the statue should be taken down to keep it protected.

According to Mr Howell, the council will provide round-the-clock security until the statue is removed or the threat is gone.

But he explained that the statue would only be removed to protect it, with the aim of it permanently remaining in its position overlooking Brownsea Island where Baden-Powell held his first experimental camp in 1907.

He said that this wasn't done today as the foundations are a lot deeper than thought and they will return another day to remove it.

Mr Howell said: "Our decision to temporarily remove the statue was taken following the listing of the statue on a website detailing potential targets for protestors.

“This listing placed the much-loved statue at risk of damage or even destruction.

"We made the decision quickly in order to protect it. We feel it is responsible to protect it for future generations to enjoy and respect.

"We will not be removing the statue today as the foundations are deeper than originally envisaged and we need further discussions with contractors on the best way to remove it safely.

"Although we cannot say when any temporary removal may take place, we will be providing 24-hour security until it is either removed or the threat diminishes.

"Should the statue be removed temporarily, barring unforeseen circumstances we will return it to the Quay as soon as the threat level subsides." 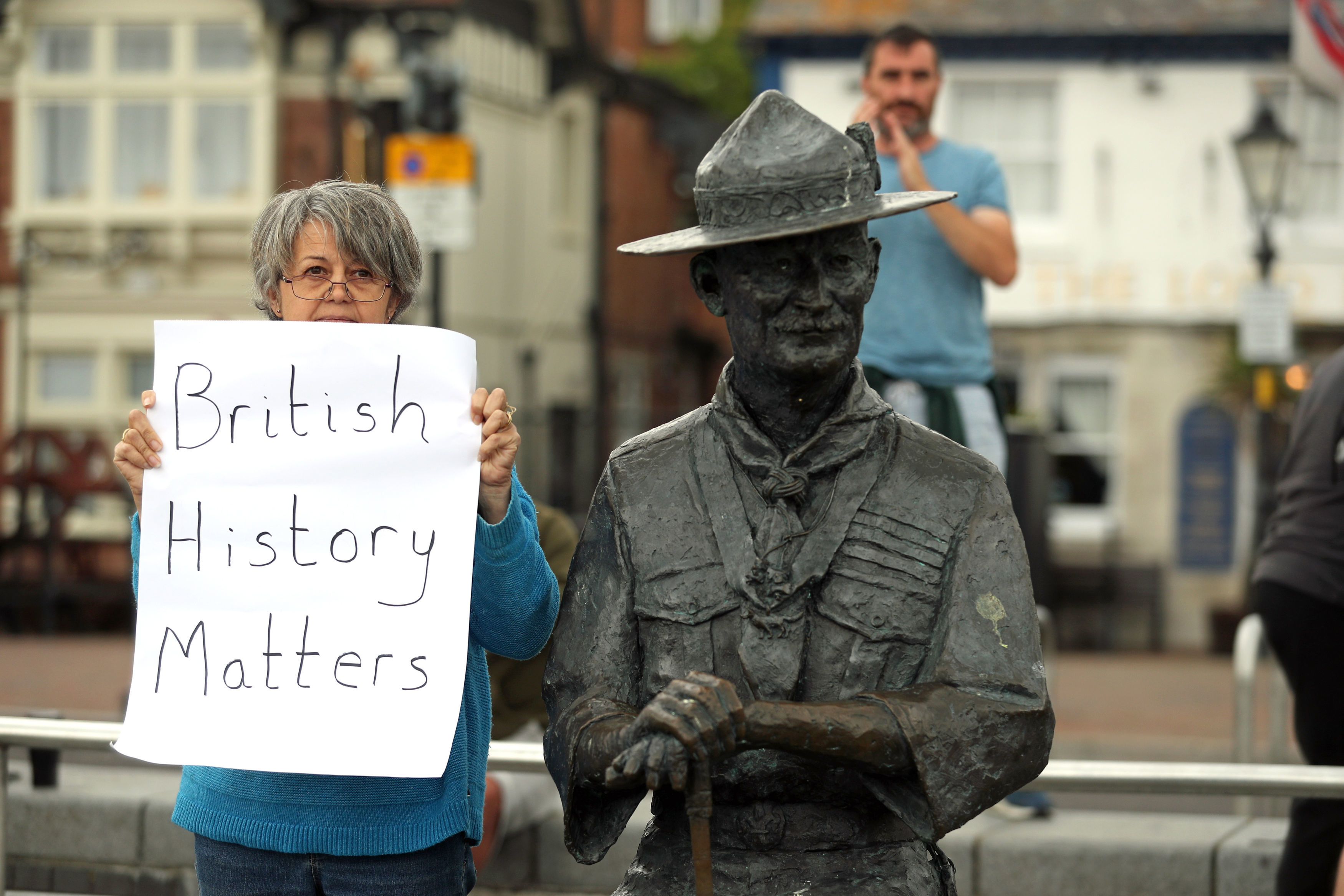 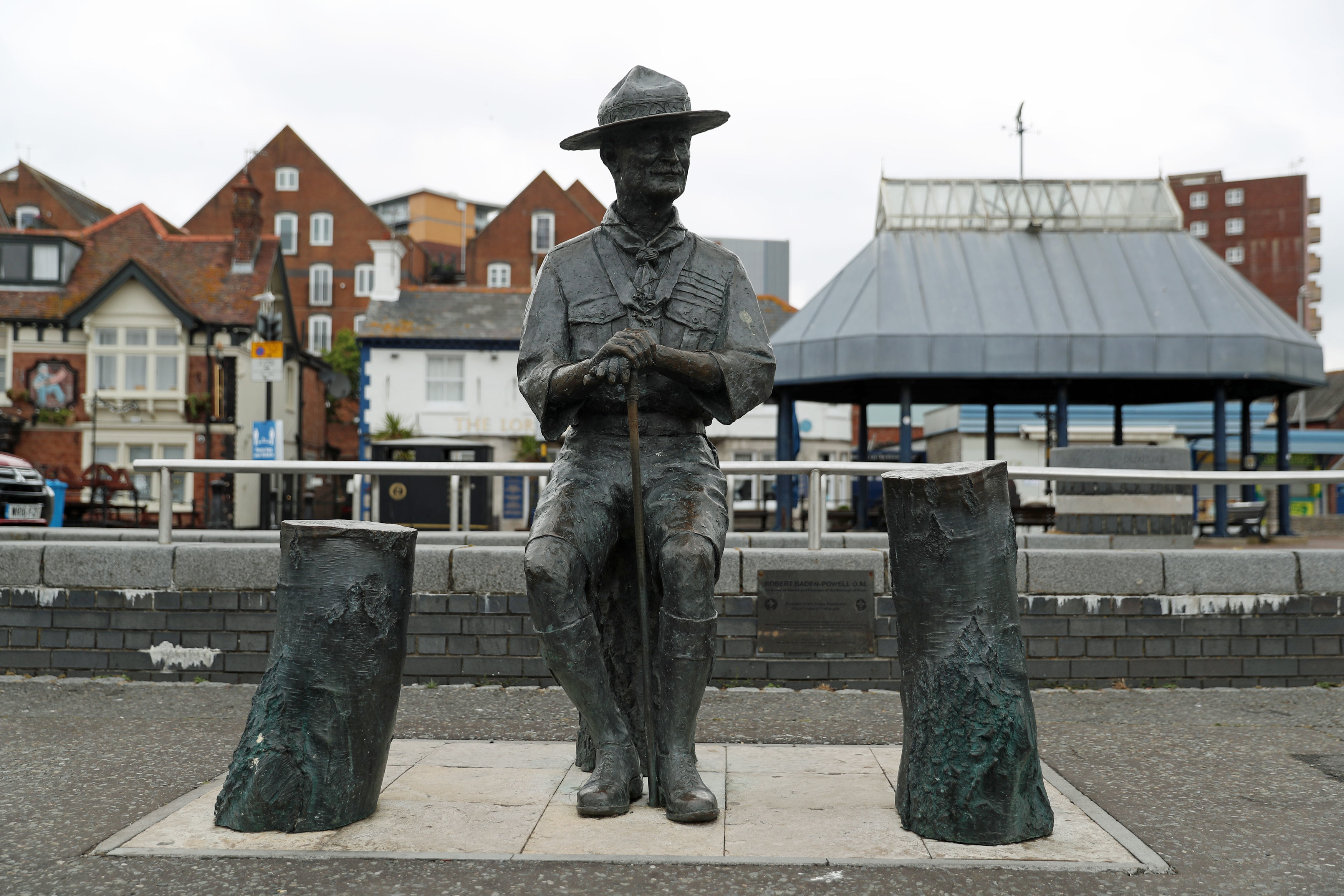 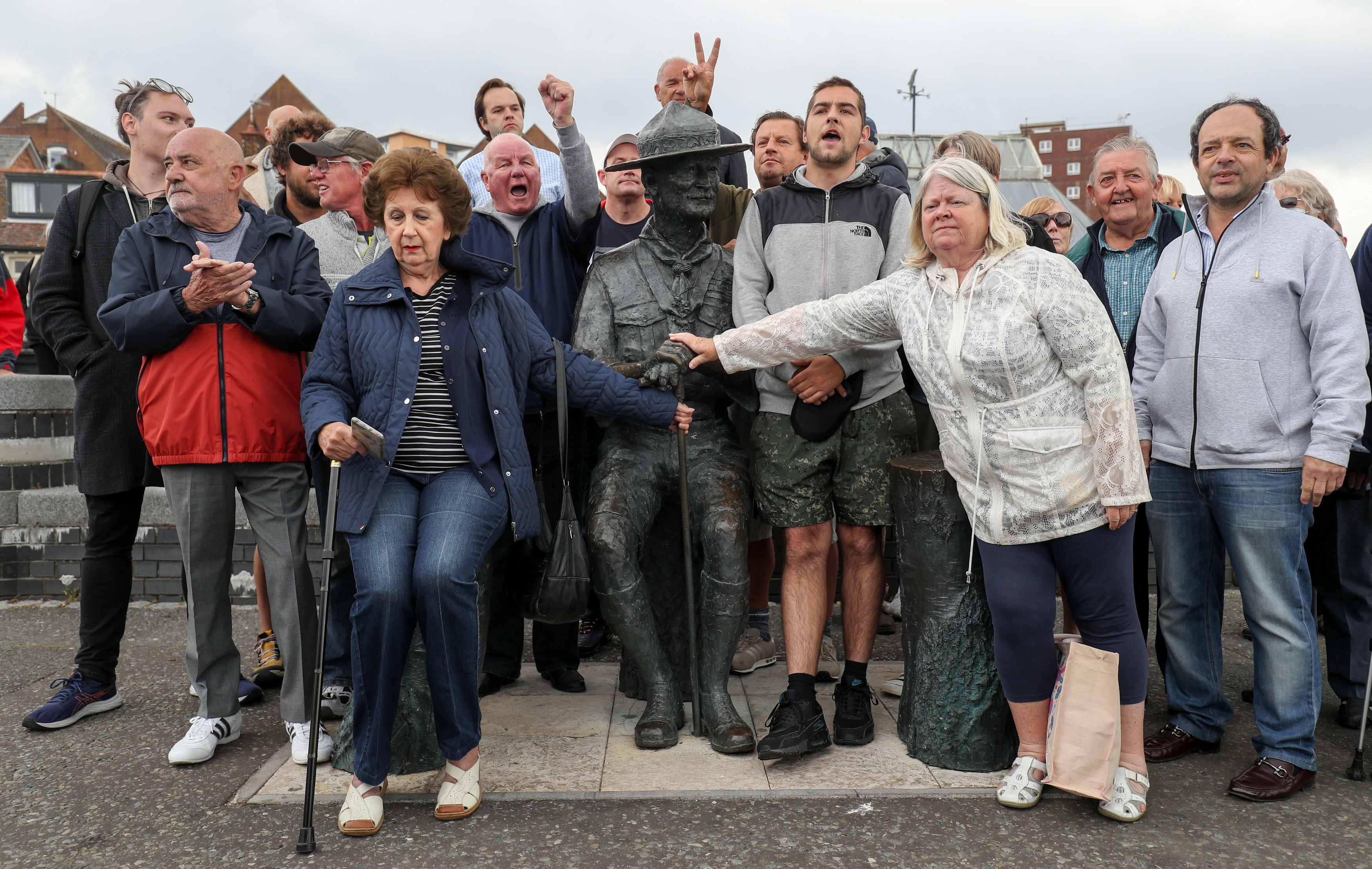 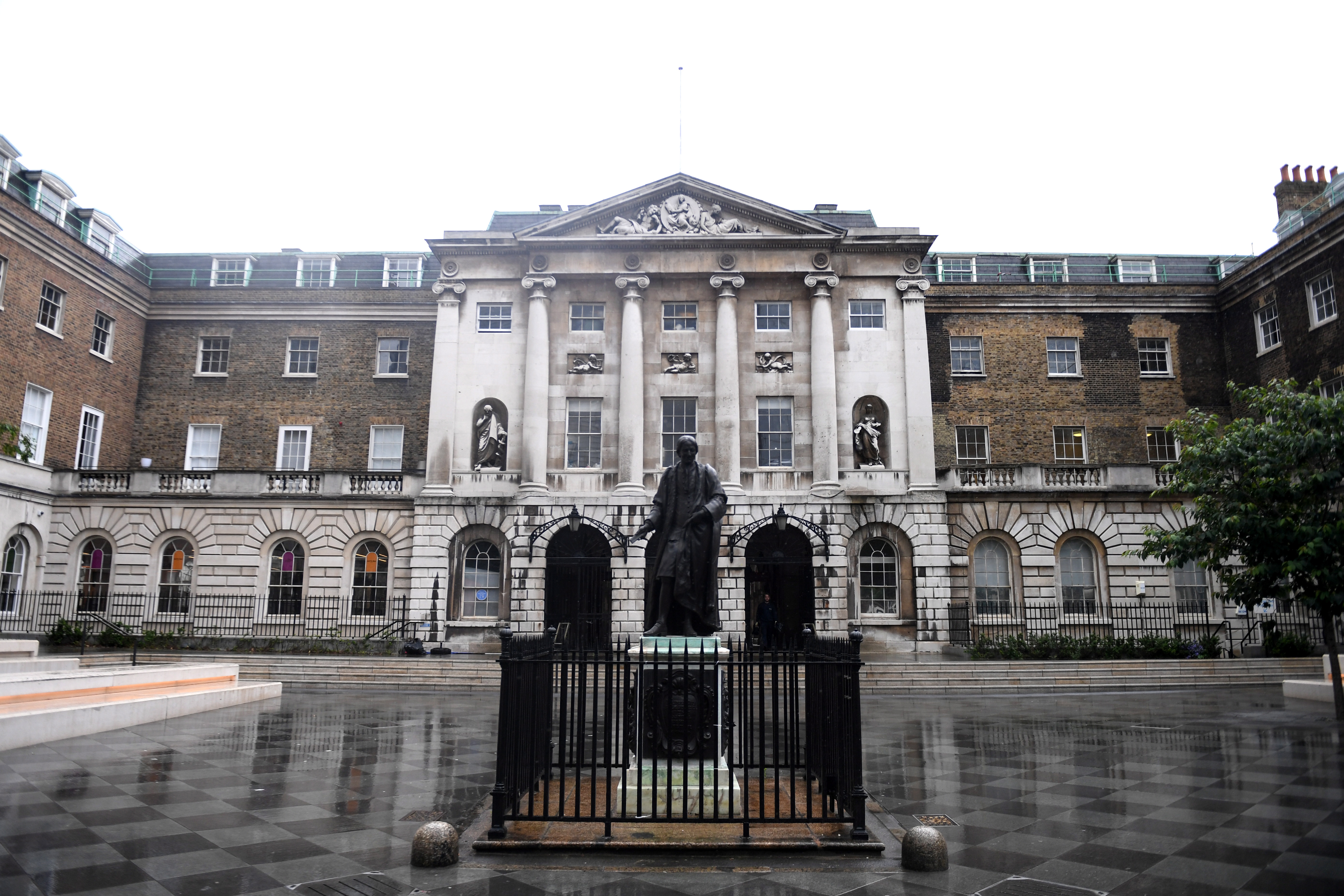 The figures depicting Robert Clayton and Thomas Guy will be taken out of public view due to their association with the slave trade.

Clayton, a former Lord Mayor of London, had ties to the Royal African Company, which transported slaves to the Americas, while Guy invested in the South Sea Company, which was also involved in the trade.

Guy made his fortune as a major shareholder of the South Sea Company where he sold his shares for £250,000 – the equivalent of £400million in modern-pay money and founded Guy's Hospital in 1721.

"We absolutely recognise the public hurt and anger that is generated by the symbolism of public statues of historical figures associated with the slave trade in some way.

"We have therefore decided to remove statues of Robert Clayton and Thomas Guy from public view, and we look forward to engaging with and receiving guidance from the Mayor of London's Commission on each

"We see the pervasive and harmful effects of structural racism every day through our work. Black people have worse health outcomes, and this inequality is one of many ways racism permeates our society.

"We are fully committed to tackling racism, discrimination and inequality, and we stand in solidarity with our patients, students, colleagues and communities.

Across the UK activists have drawn up the "Topple the Racists" list of monuments they want removed after demonstrations were sparked over the death of George Floyd in the US.

Protests in Bristol already saw the toppling of a statue of slave trader Edward Colston, with the memorial to Winston Churchill controversially daubed with the word "racist".

And Scouts, dressed in their full uniforms, today saluted in front of the figure of Sir Baden-Powell in Dorset as supporters formed a human shield around the statue.

Former Queen's Scout Len Bannister, 79, was among the crowd defending the statue, telling ITV News: "If they want to knock this down – they'll have to knock me down first."

'DON'T GIVE IN TO THUGGERY'

Mr Bannister added: "It's absolutely crazy. Who's it that actually wants to do it? I'll fight them off. I'm actually very angry – and I'm not a protester. I've had a lot of enjoyment because of him in my life because of him."

One person cried out "don't give in to thuggery".

And Scout Matthew Trott, 27, travelled over 100 miles from his home in Cwmbran, Monmouthshire, to Poole to salute the statue.

He said: "Baden-Powell is a hero to me. Everyone has made mistakes and most of what has been written about him is not true."

And he said the memorial was particularly "vulnerable" as it was easily accessible and had parts that could be broken off.

But he said that the plan was to return the statue back to its original spot after the controversy had died down.

He added: "We will not be removing the statue today as the foundations are deeper than originally envisaged and we need further discussions with contractors on the best way to remove it safely.

"Although we cannot say when any temporary removal may take place, we will be providing 24-hour security until it is either removed or the threat diminishes.

"Should the statue be removed temporarily, barring unforeseen circumstances we will return it to the Quay as soon as the threat level subsides.”

Today has seen dozens of people flock to the statue to stop it from being removed.

Workmen had arrived with a crane to move the statue this morning to move it into storage but were unable to.

Owen Diffey, 19, a former assistant scout leader, said he would stand guard to stop the statue being removed if it came to it.

He said: "I'll be here until they try to remove it.

"I am disgusted at what's going on. They are making something political of a non-political organisation that stands for nothing but equality."

And one local MP today tried to blame the police for the decision to move the statue.

Local Tory MP Conor Burns wrote on Twitter this morning: "The removal of the statue of Lord Baden-Powell from Poole is a huge error of judgement. Very concerned by the idea it is on advice from @dorsetpolice."

He added: "Are we going to follow the example of the Met and Bristol and let the mob rule the streets?" 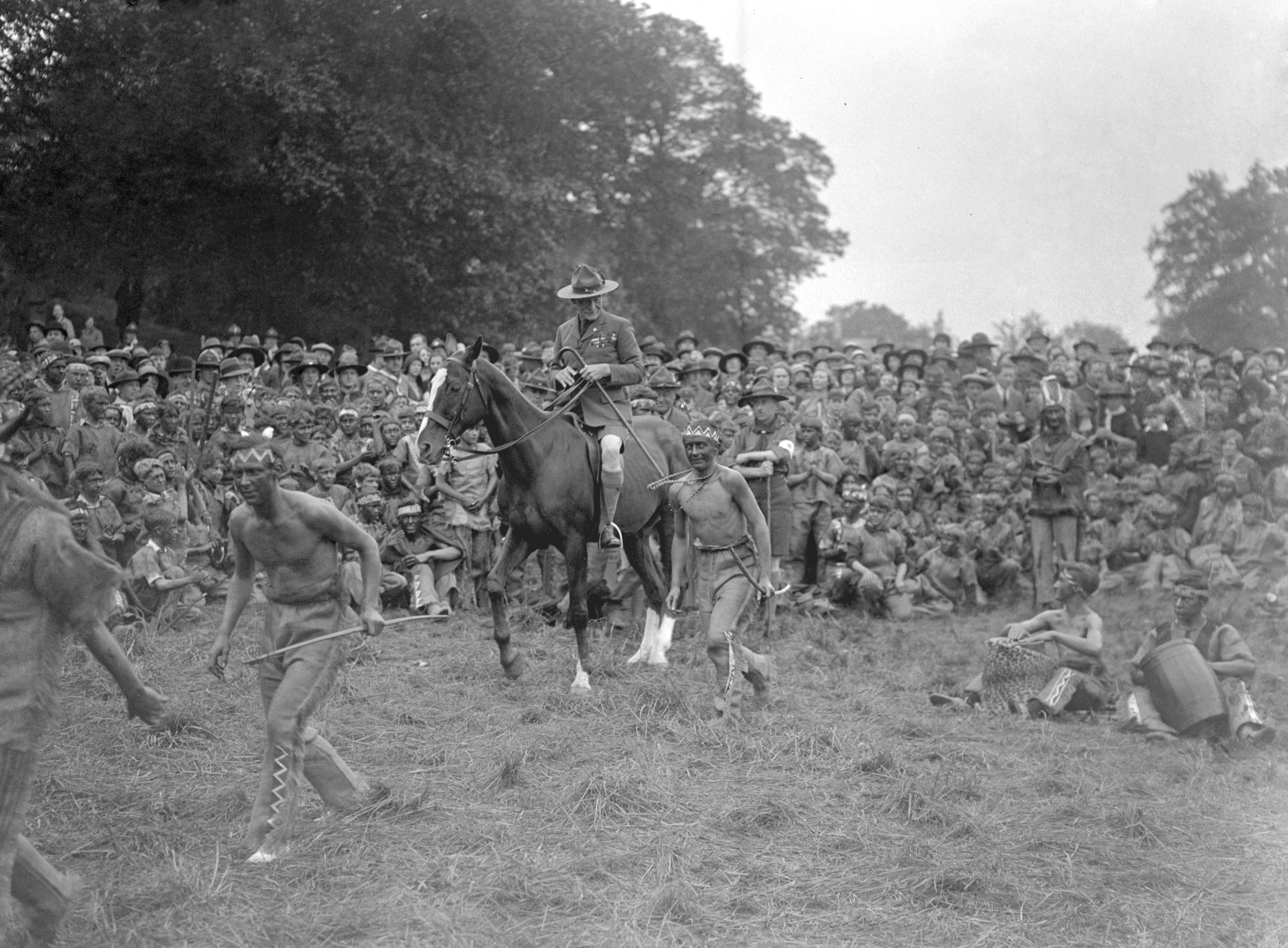 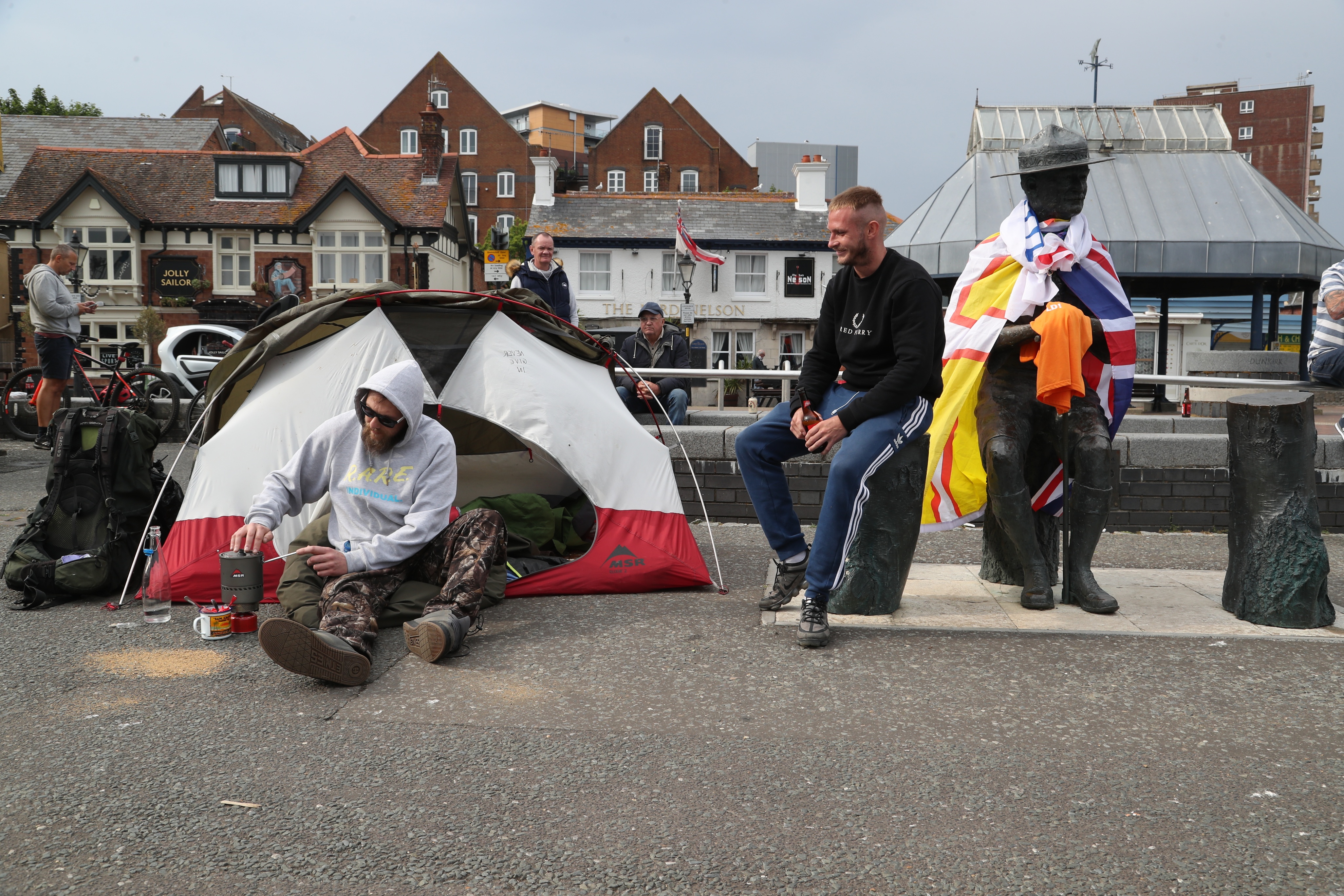 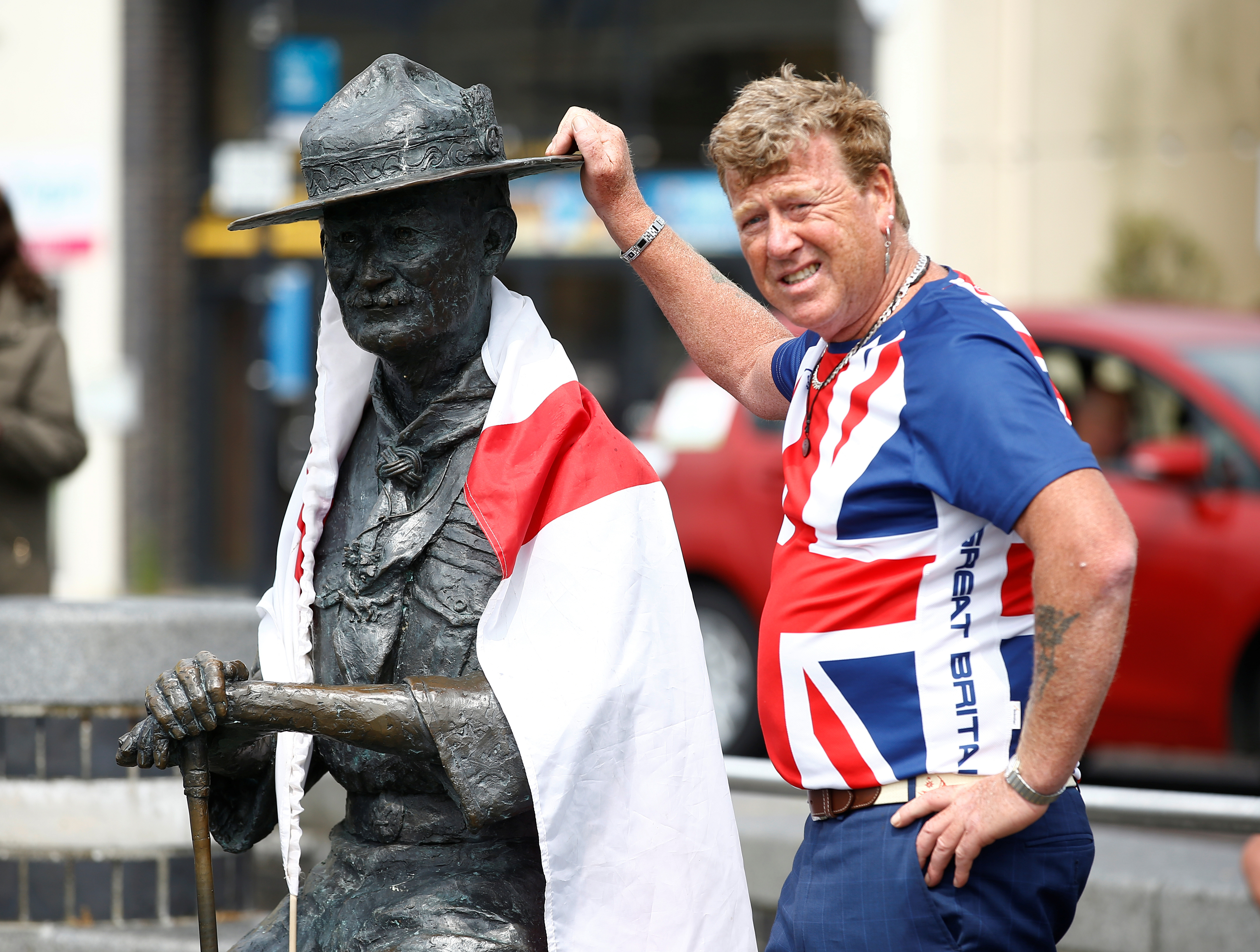 But Dorset Police spokeswoman said: "The decision on whether to remove the statue was not one for the police and no advice was given to remove it."

Mr Howell, an independent councillor, said: "The contractor was due to remove it on a temporary basis for it's own protection but they didn't want to work in a media circus.

"It will not happen today."

The statue was put up in 2008 – 100 years after Baden-Powell launched the Boy Scout movement which now has 54million members worldwide.

But he later became sympathetic to Hitler, writing in his diary of 1939: “Lay up all day. Read Mein Kampf.

Bournemouth, Christchurch and Poole Council have been advised to put the statue in storage by the police.

They fear similar protests and violence as seen in demonstrations in the past week across Britain.

Council leader Vikki Slade said: “Whilst famed for the creation of the Scouts, we also recognise that there are some aspects of Robert Baden-Powell’s life that are considered less worthy of commemoration.

“Therefore, we are removing the statue so that we can properly involve all relevant communities and groups in discussions about its future, including whether a more educational presentation of his life in a different setting might be more appropriate.”

She briefly visited the statue this afternoon but was confronted by angry locals who accused her of acting without public consultation.

The council claims that Dorset County Scouts was “supportive” of its decision. 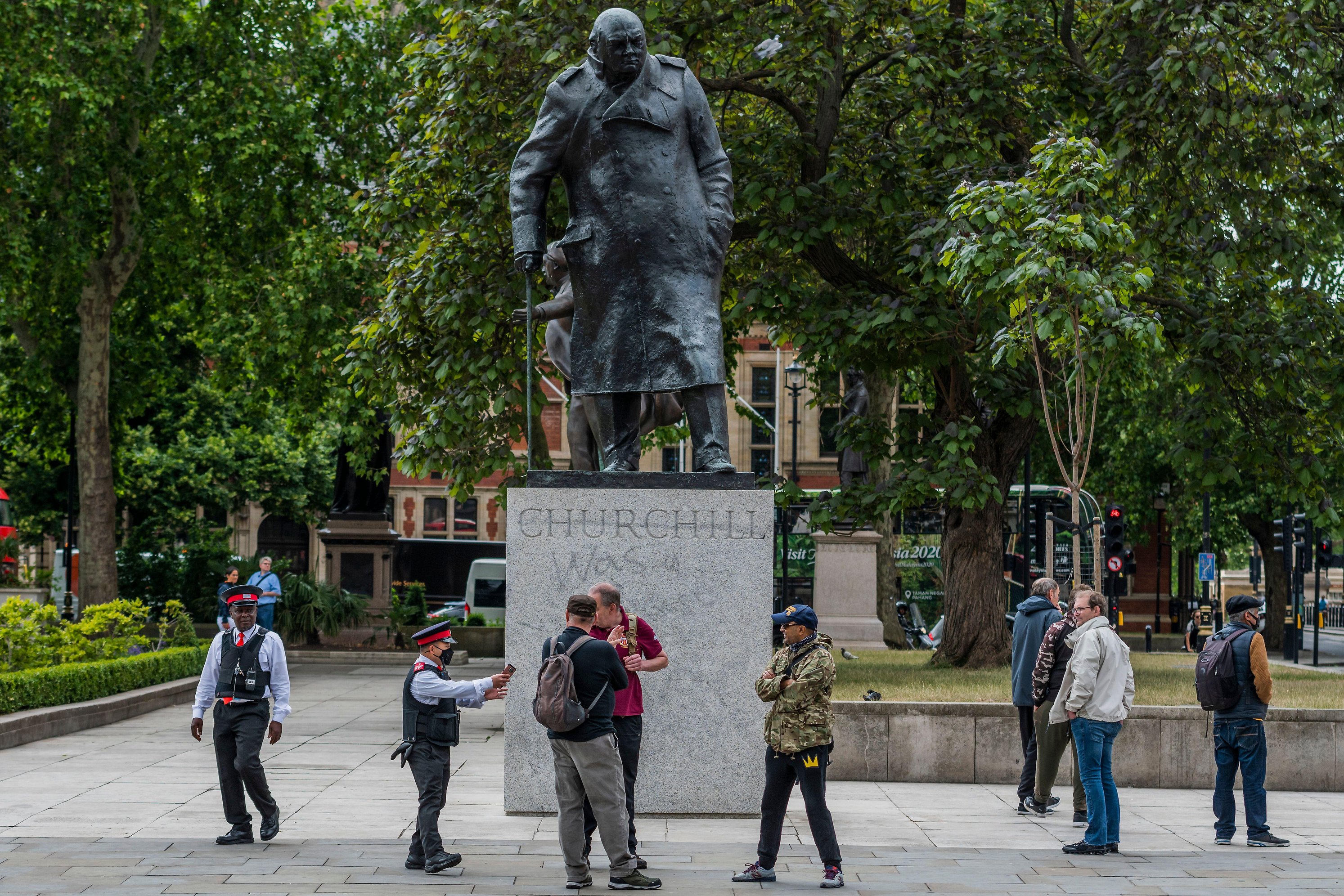 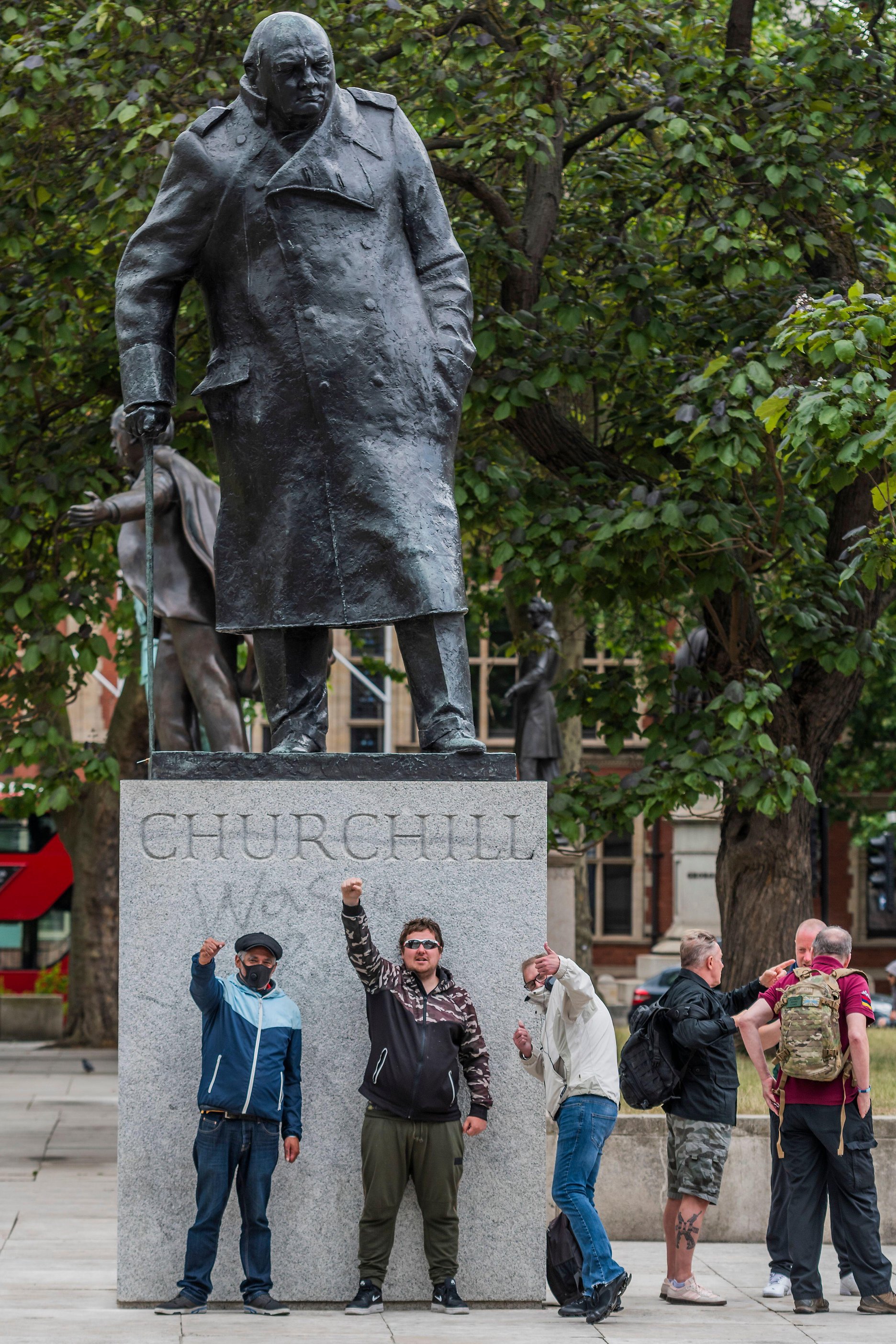