Russian cyber threat to US could invoke ANZUS Treaty

With heightened warnings that Russia could be preparing a major cyber attack on the US, the Biden administration would expect the Australia, New Zealand and United States Security Treaty (ANZUS) to be invoked in full support of America, according to a senior official.

Such a decision could draw Australia into a retaliatory American cyber assault on Vladimir Putin’s regime, drawing Australia directly into any confrontation. 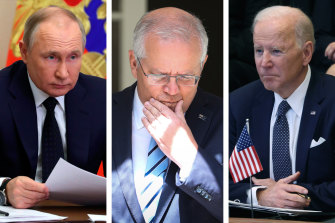 Australia could be drawn into a retaliatory cyber assault on Vladimir Putin’s regime in the event of a Russian cyber attack on America.Credit:Rhett Wyman, AP

The top cyber security adviser to President Joe Biden, Anne Neuberger, told reporters in Sydney that the US equally would support Australia in the event that it suffered a major cyber attack.

The Biden administration last week called to a classified briefing several hundred US companies to warn them that it had detected Russian preparations for a possible cyber attack on critical infrastructure. This category includes power grids, water supplies, financial systems, hospitals and transport networks.

Moscow could be planning an attack in retaliation for US sanctions on Russia over its invasion of Ukraine, Ms Neuberger said. “If Russia initiates a cyber attack on the US, we will respond.”

Asked whether she expected Australia to invoke ANZUS in response, Ms Neuberger said, “the partnership between the US and Australia on intelligence and cybersecurity is so deep that we would expect that if there was any significant cyber attack, whether in Australia or the US, we would each be there for the other in terms of rapid intelligence sharing, rapid incident response and remediation, and then determining attribution and consequences.”

She said that this had been canvassed in “regular discussions with our Australian counterparts”. She was speaking at the conclusion of a two-day meeting of top cyber officials of the Quad nations: Australia, India, Japan and the US.

The ANZUS Treaty, signed in 1951, was amended in 2011 under Julia Gillard’s prime ministership to include cyber attack as well as military attack as a potential trigger for a joint response. 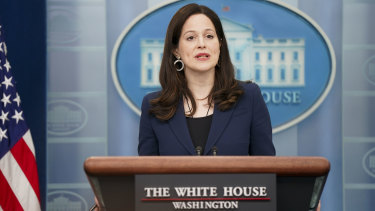 Anne Neuberger is the deputy national security advisor for cyber and emerging technologies for the Biden Administration.Credit:Bloomberg

Specifically, the Treaty says that “in the event of a cyber attack that threatens the territorial integrity, political independence or security of either of our nations, Australia and the US would consult together and determine appropriate options to address the threat.”

To date, the Treaty has been invoked once, by the Howard government as part of Australia’s response to the September 11, 2001 terrorist attacks in the US.

Ms Neuberger, the US Deputy National Security Adviser on Cyber and Emerging Technology, held a White House press briefing on Monday to urge companies and individuals to “lock the digital door” against potential Russian attack.

She said that Washington was most concerned about vulnerabilities in America’s corporations because the private sector managed many of America’s critical infrastructure sector.

“The most troubling piece,” she said, “is we continue to see known vulnerabilities, for which we have patches available,” in the American private sector. “And that makes it far easier for attackers than it needs to be.”

Asked to detail the Russian actions so far, Ms Neuberger said: “Preparatory activity could mean scanning websites; it could be hunting for vulnerabilities. There’s a range of activity that malicious cyber actors use, whether they’re nation states or criminals.”

She said that she was pleased with the work program that the Quad nations had agreed, which she described as “aggressive and significant”, to toughen critical infrastructure, improve the security of technology, and move towards common standards in government procurement.

Coming soon: Essential news, views and analysis that cut to the chase of the federal election campaign. Sign up to our Australia Votes 2022 newsletter here.