Russian divers are now examining the damage left by a powerful blast on the Kerch bridge to Crimea that is a prestigious symbol of Moscow’s annexation of the peninsula and a key supply route to forces battling in southern Ukraine.

Russian Deputy Prime Minister Marat Khusnullin said the divers would start work in the morning, with a more detailed survey above the waterline expected to be complete by day’s end, Russian news agencies reported.

The team will inspect the bridge’s foundations for structural integrity and will search for further evidence in relation to the blast, which killed three people.

‘The situation is manageable – it’s unpleasant, but not fatal,’ Crimea’s Russian governor Sergei Aksyonov assured reporters before threatening to retaliate over the blast.

‘Of course, emotions have been triggered and there is a healthy desire to seek revenge,’ he said.

The bridge is a major artery for the Russian forces that control most of southern Ukraine’s Kherson region and for the Russian naval port of Sevastopol. But Rail traffic was restored to the bridge late last night, meaning it is unlikely the destruction will dramatically hinder Russian supply routes.

Saturday’s explosion on the bridge over the Kerch Strait prompted gleeful messages from Ukrainian officials, though no claim of responsibility.

But a mysterious ‘wave’ which appeared under the bridge moments before it was blown up has fuelled speculation that Ukrainian special services used a boat or explosive-laden drone to launch an attack to damage Putin’s supply lines. 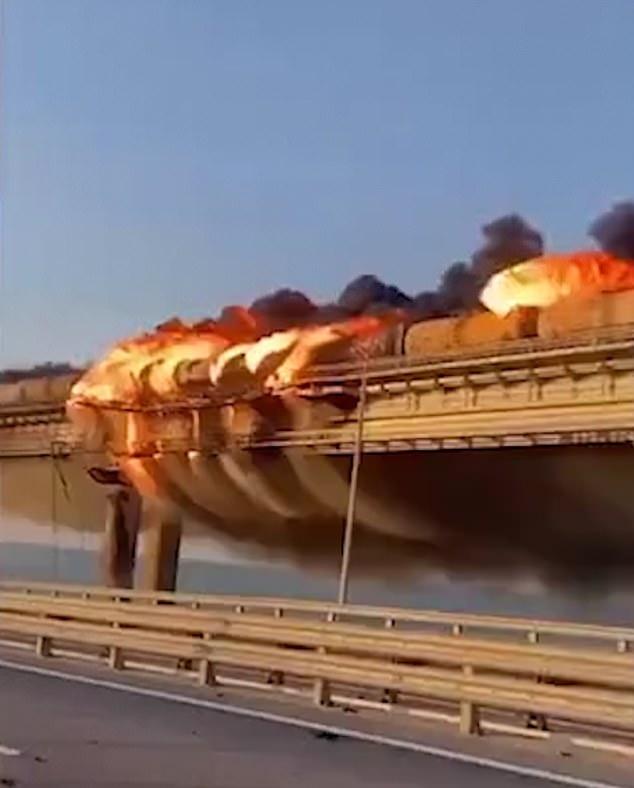 Saturday’s explosion on the bridge over the Kerch Strait prompted gleeful messages from Ukrainian officials but no claim of responsibility. Russia did not immediately assign blame 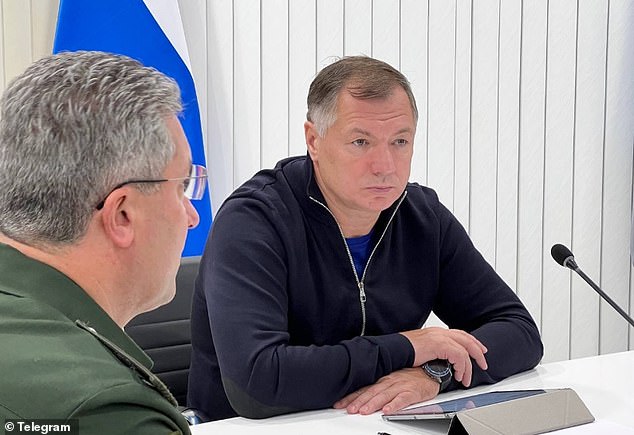 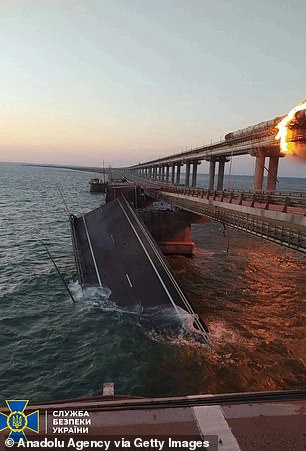 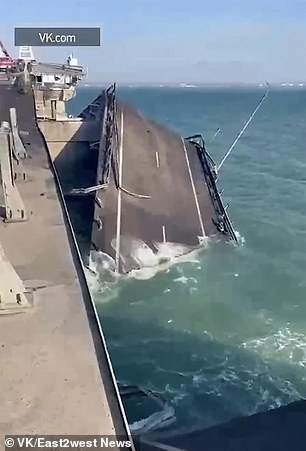 Explosion causes fire at the Kerch bridge in the Kerch Strait, Crimea, October 8, 2022 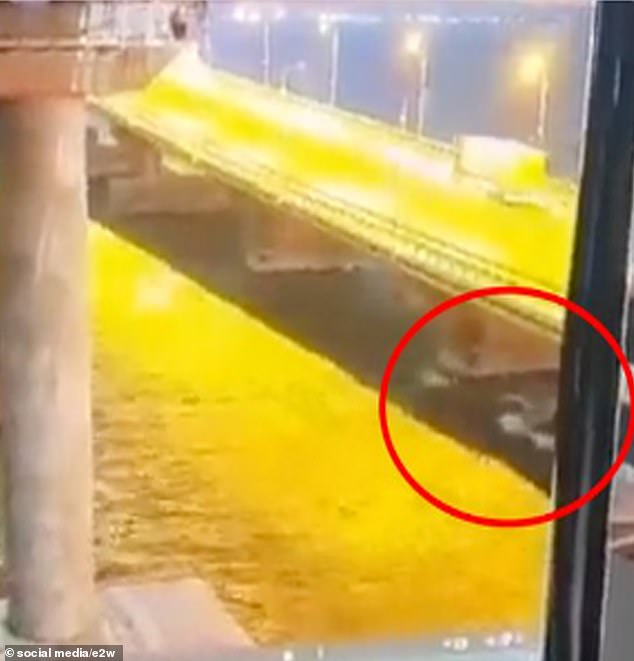 Russia seized Crimea from Ukraine in 2014 and the 12-mile Crimea Bridge linking the region to its transport network was opened with great fanfare four years later by President Vladimir Putin.

Russian law enforcement identified Samir Yusubov, 25, from the Krasnodar region in Russia, as the alleged owner of the red-coloured International Prostar truck, which, according to investigators, exploded on the Crimean Bridge.

They are still investigating who was driving the truck when it exploded.

It was not yet clear if the blast was a deliberate attack, but the damage to such a high-profile structure came amid battlefield defeats for Russia and could further cloud Kremlin reassurances that the conflict is going to plan.

On Saturday, Putin signed a decree for tighter security for the bridge, as well as the infrastructure supplying electricity and natural gas to Crimea, and ordered an investigation.

‘Conceivably the Russians can rebuild it, but they can’t defend it while losing a war,’ said political analyst James Nixey of Britain’s Chatham House think tank.

Russian officials said three people had been killed in the blast, probably the occupants of a car travelling near the truck that blew up. On the bridge’s upper level, seven fuel tanker wagons of a 59-wagon train heading for the peninsula also caught fire.

In the southeastern Ukrainian city of Zaporizhzhia, 80 miles from a Europe’s largest nuclear power plant, Russian missile attacks killed 17 people and sent around 50 to hospital.

A nine-storey building was partially destroyed, five residential buildings levelled and many more damaged in a dozen attacks, Oleksandr Starukh, the governor, said on the Telegram messaging app.

‘There may be more people under the rubble,’ he warned, with eight rescued. 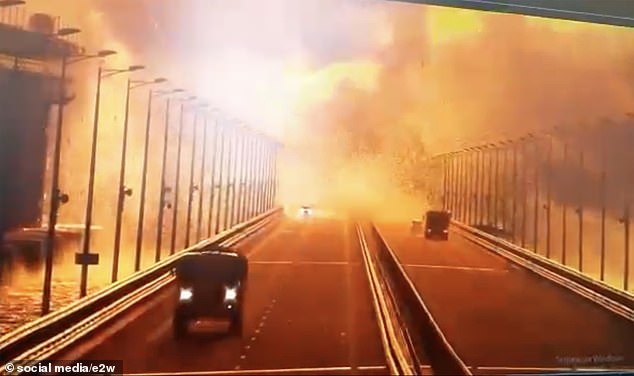 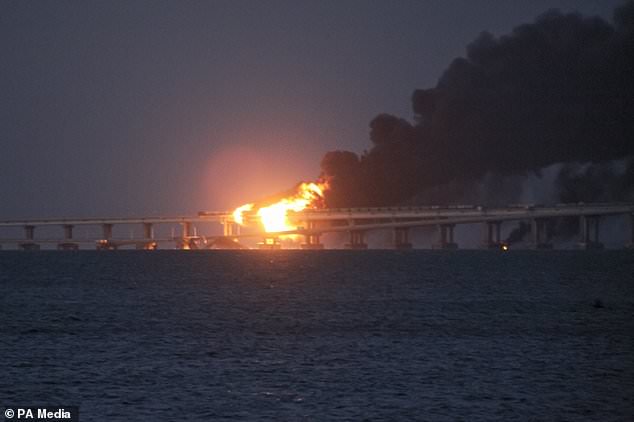 Flames and smoke rise from the Crimean Bridge connecting the Russian mainland and the Crimean peninsula over the Kerch Strait in Kerch, Crimea (AP) 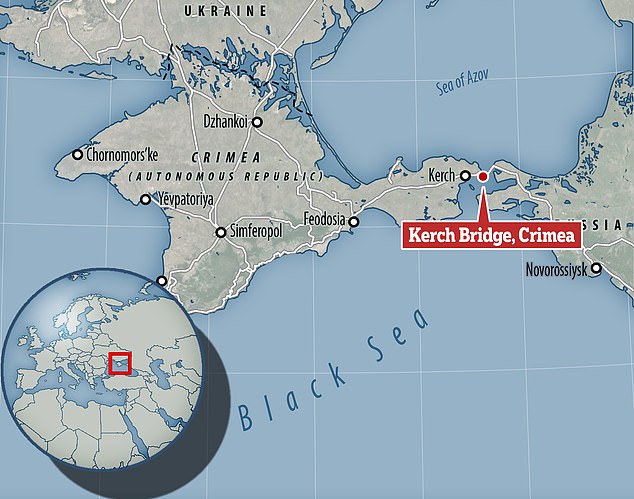 Ukrainian President Volodymyr Zelensky did not refer to the blast in a video address on Saturday, saying merely that the weather in Crimea was cloudy.

‘But however cloudy it is, Ukrainians know… our future is sunny,’ he added. ‘This is a future without occupiers, across our territory, particularly in Crimea.’

The head of Ukraine’s National Security and Defence Council posted a video of the bridge on social media alongside a video of Marilyn Monroe singing ‘Happy birthday, Mr President’. 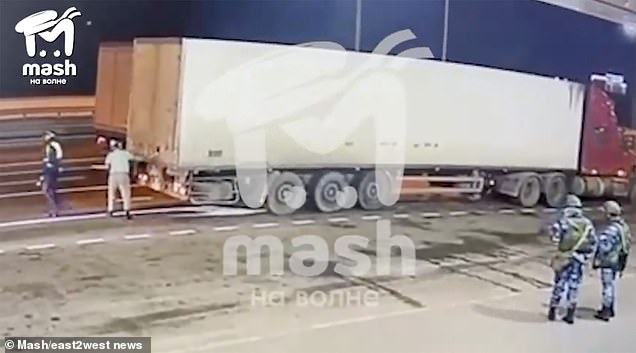 Russian law enforcement identified Samir Yusubov, 25, from the Krasnodar region in Russia, as the alleged owner of the red-coloured International Prostar truck, which, according to investigators, exploded on the Crimean Bridge

Since the war started on February 24, Ukrainian officials have regularly suggested they wanted to destroy the bridge.

But a leading Ukrainian presidential aide claimed this morning the Kerch Strait crossing carnage may have been ordered by one of Vladimir Putin’s warring commanders.

Mykhailo Podolyak alleged that Russia’s FSB secret service and the defence ministry are at loggerheads in a bitter dogfight over the botched war and are trying to undermine one another’s credibility.

‘Isn’t it obvious who made [the] explosion? Truck arrived from RF [Russian Federation],’ he said.

‘Undoubtedly, we are witnessing the beginning of large-scale negative processes in Russia.’