The family of a woman who has not been seen for four days have described their ‘desperation’ as police and search and rescue teams continue to search for clues.

Teams were photographed searching Clapham Common this morning where Sarah Everard is thought to have been walking before she disappeared.

The 33-year-old was last seen walking between Clapham Junction and Brixton at 9pm on Wednesday.

Her family, who are from York, have travelled down to London as the search continues and have said they are growing more worried with every day she has not been found.

Aunt Jane Everard, of Bolton, Lancs, told The Sun: ‘We’re devastated. It is so out of character for her.

‘She has a very big circle of friends from Durham, where she was at university and down in London. It has been a real shock. We are all so worried.’

Sarah left her friend’s house in Leathwaite Road, Clapham, through a back gate on to the A205 South Circular and began walking to her home address in Brixton, the force said. 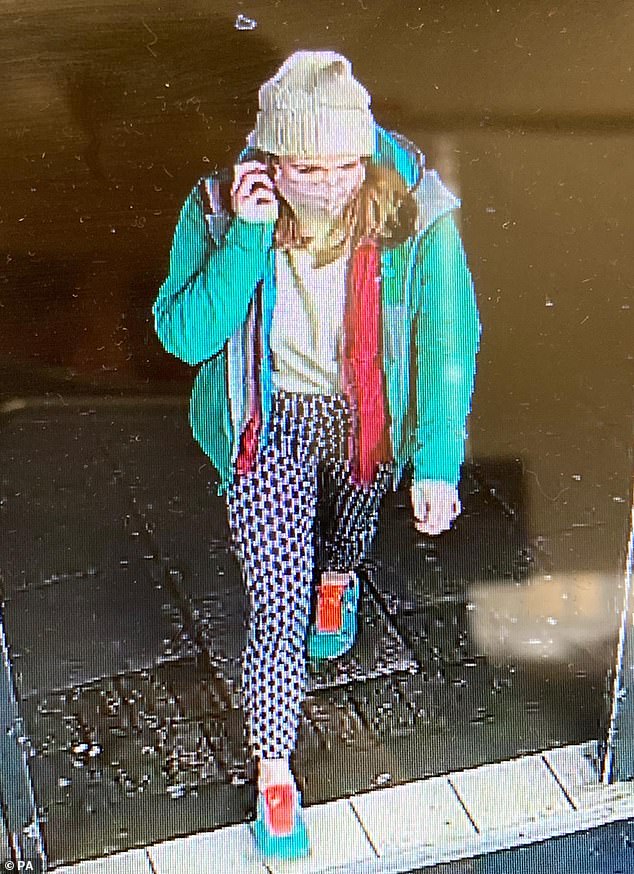 Fresh CCTV images have been released as the desperate search for Sarah Everard, 33, who was last seen walking between Clapham Junction and Brixton at 9pm on Wednesday 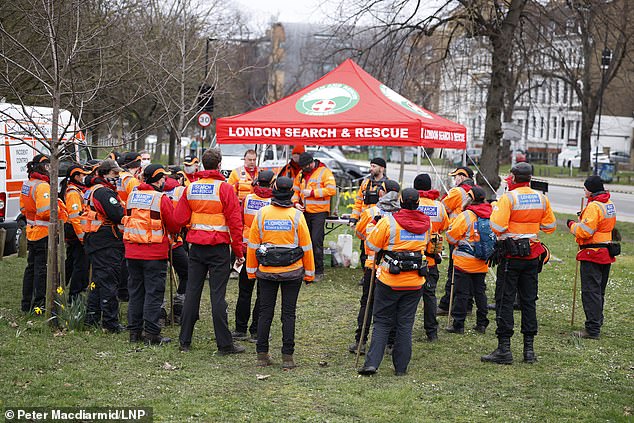 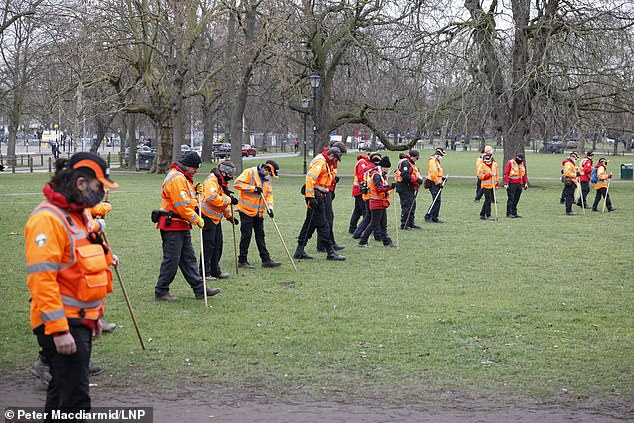 Police are concerned for the safety of Ms Everard who was last seen leaving a friend’s house in Leathwaite Road, Clapham, London. Pictured: search teams in Clapham Common this morning

It is thought she walked across Clapham Common and was expected to arrive home around 50 minutes later. It is not clear if she did return home, the Met said.

She is thought to have been wearing green earphones and a white beanie hat.

Yesterday, London Metropolitan Police released a fresh appeal to find her and told MailOnline it was searching the ponds in Clapham Common for her yesterday afternoon.

They were joined by London Search and Rescue volunteers who said they had been searching the park since Friday night.

In a statement, Ms Everard’s family said: ‘With every day that goes by we are getting more worried about Sarah. 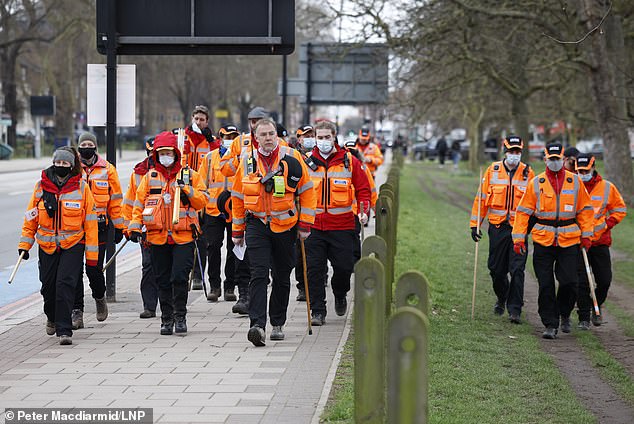 Ms Everard is thought to have walked across Clapham Common, and was due to arrive home in Brixton 50 minutes later but has not been seen since she left her friends house that evening

‘She is always in regular contact with us and with her friends and it is totally out of character for her to disappear like this.

‘We long to see her and want nothing more than for her to be found safe and well.

‘We are so grateful to the police and all our friends for all they are doing.

‘We are desperate for news and if anyone knows anything about what has happened to her, we would urge you to please come forward and speak to the police. No piece of information is too insignificant.’

Reports suggest Sarah spoke with her partner on the phone on her way home to Brixton on Wednesday evening and talked for about 15 minutes about how their day had been and discussed plans to see each other the following day.

Friends have said they believe something happened to her after the call ended at 21.28. 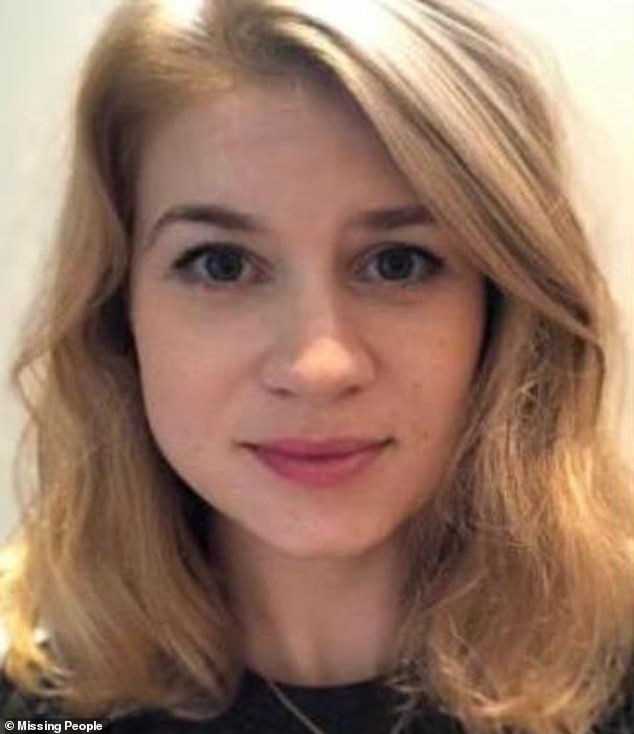 Sarah Everard (pictured), 33, was last seen walking between Clapham Junction and Brixton at 9pm on Wednesday 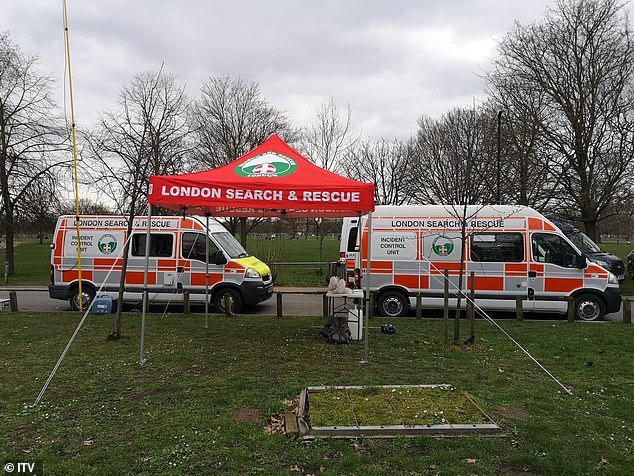 Sarah’s Uncle Doug told the Sun she had moved to London about 12 years ago and that she also had a sister and brother who also lived in London.

He added: ‘She is lovely, a really lovely young lady, very sensible.

‘The police are keeping my brother informed and we are on the end of a phone.

‘It is a really tough time. They are devastated and they are desperate to find out anything they can.

‘None of us really know anything.

‘They have always been a very very close family. Sarah, her parents and her sister and brother, they are all in touch on a regular basis.

Sarah’s best friend Rose, a teacher, told the Brixton Blog: ‘Sarah and I met many years ago whilst studying together at Durham University.

‘She has always been an exceptional friend, dropping everything to be there to support her friends, whenever they need her. 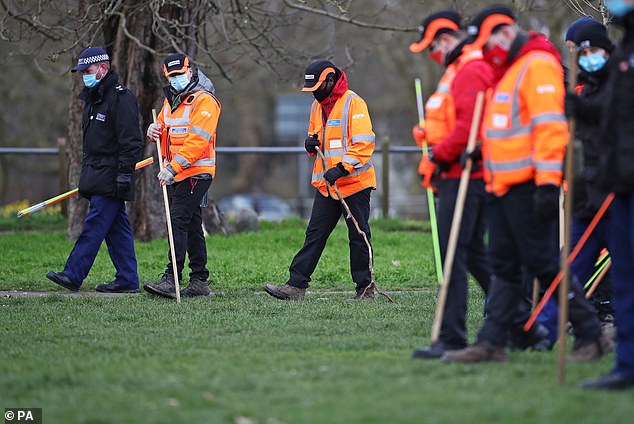 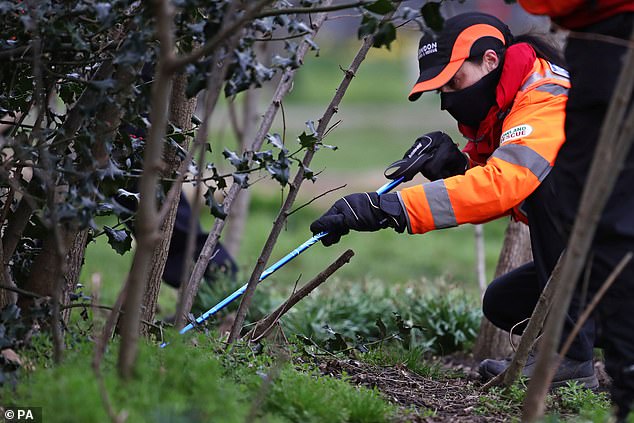 Pictured: A team seen searching undergrowth today. She is thought to have left Leathwaite Road through a back gate and walked across Clapham Common 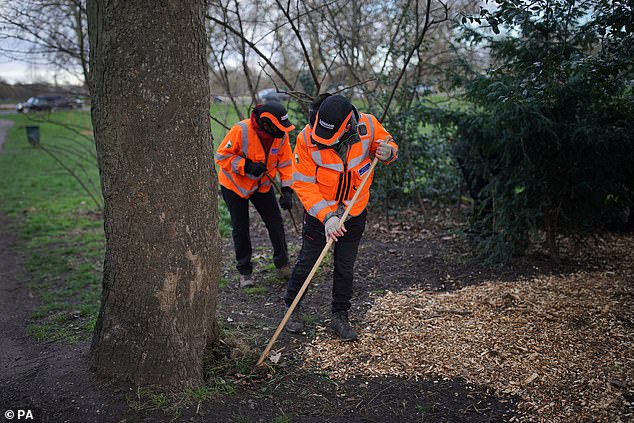 A team from London Search and Rescue pictured assisting police today. Ms Everard was expected to arrive home 50 minutes later, but has not been seen or heard from since

‘It was only recently that she was telling me the good news about her new role as a senior marketing account manager which she was excited to start.

‘She is a beautiful, thoughtful and incredibly kind friend. It is extremely uncharacteristic of her to have gone missing, which is why we are all deeply concerned something has happened to her.’

Detective Chief Inspector Ian Kenward, from the Central South Public Protection Team, said: ‘Sarah’s disappearance is completely out of character and understandably her family and friends are incredibly worried.

‘We are also growing increasingly concerned for her welfare and have officers working round the clock to try and find her.

‘I would ask anybody who was in the Clapham Common area on Wednesday night to think about whether you saw Sarah or any suspicious activity around the time of her disappearance.’ 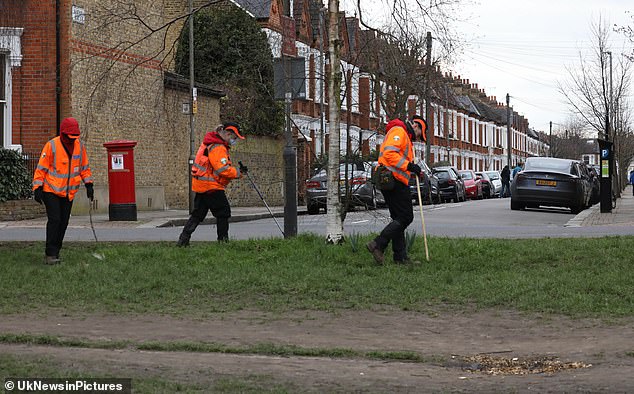 It is thought she walked across Clapham Common (pictured today, as officers search the grounds) and was expected to arrive home around 50 minutes later 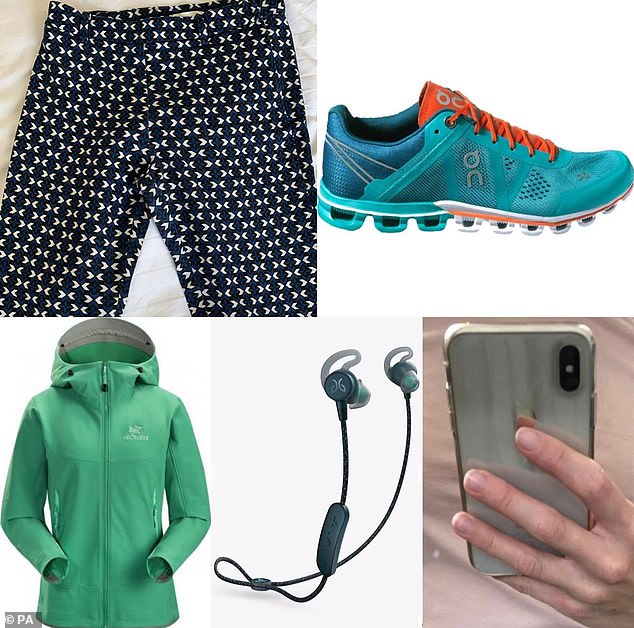 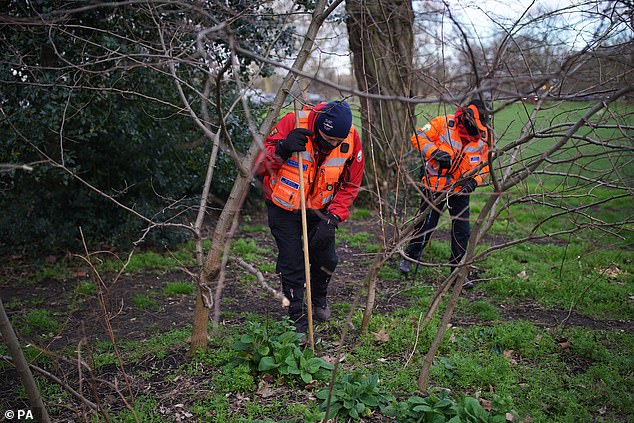 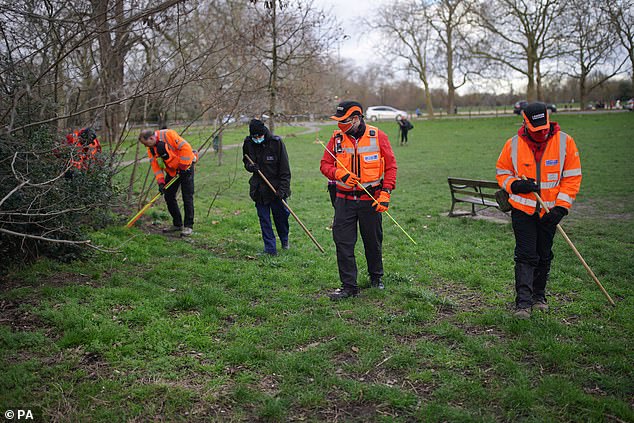 In a statement, Ms Everard’s family said: ‘With every day that goes by we are getting more worried about Sarah’ 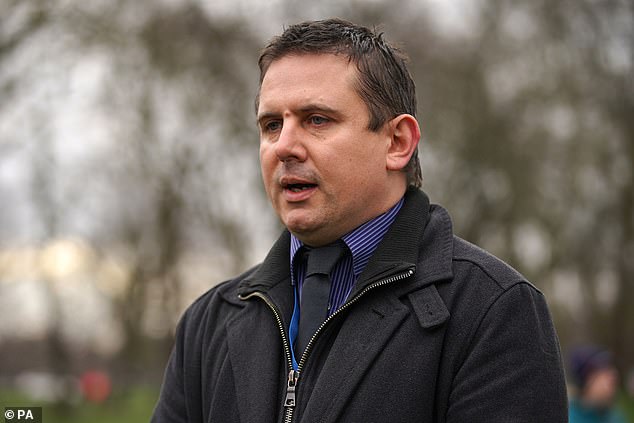 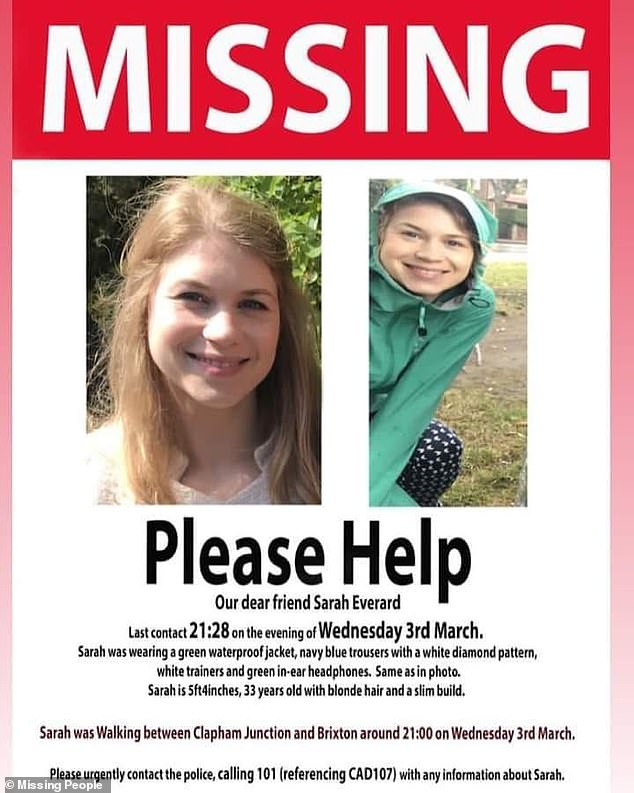 Her family and friends released a plea for her return, saying: ‘Sarah, we are here for whenever you are ready’

Her family and friends released a plea for Ms Everard’s return yesterday, saying: ‘Sarah, we are here for whenever you are ready.’

Ms Everard, from Lambeth, is 5ft 4 with blonde hair and was carrying a transparent case with green in-ear Bluetooth headphones.

Her loved ones added: ‘We can listen, talk you through what help you need, pass a message for you and help you to be safe.’

Specialist officers and volunteers from London Search and Rescue are carrying out searches in the area of Clapham Common and the walking route between Clapham and Brixton.

Anyone with information is asked to call 101 quoting CAD 3309/06MAR. Information can also be provided anonymously by calling the Missing People charity on 116 000.