The COVID-19 strain at the centre of the outbreak that has forced Melbourne into a second week of lockdown is not moving faster than other variants of the virus or spreading in new, unexpected ways, Australia’s peak pandemic advisory group has found.

The government justified Wednesday’s extension of the lockdown by claiming what is now being called the “Kappa” variant of the virus is more contagious than previous outbreaks and infections are occurring more readily between people who only briefly came into contact. 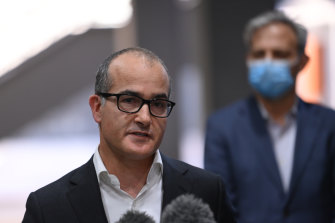 University of Melbourne Professor James McCaw, an infectious disease expert and member of the Australian Health Protection Principal Committee, which advises the national cabinet, said this was not supported by the data he had seen.

“There is no epidemiological evidence that this virus spreads faster,” he said. “There is no clear reason to think this virus is spreading in different ways.

“We need to be very cautious. We are on an absolute knife-edge in Victoria about whether we bring this under control rapidly or it develops further. But I don’t think it is helpful to seed alarmist or doomsday-type thoughts into the community.”

Chief Health Officer Brett Sutton, who has described the virus strain at large in Melbourne as an “absolute beast” that was spreading “in settings and circumstances we’ve never seen before”, toned down his language on Wednesday, as acting Premier James Merlino detailed the state’s next stage of COVID-19 restrictions. 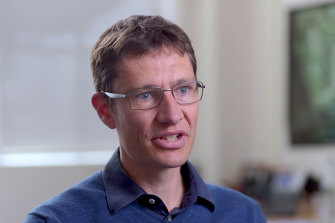 While Melbourne’s lockdown will continue for another week, restrictions will be eased in regional Victoria from Friday. In Greater Melbourne, the five-kilometre movement radius will be extended to 10 kilometres and supermarket shoppers will need to check in with a QR code.

Professor Sutton’s advice to the government about the highly infectious nature of the virus and novel forms of transmission being detected by contact tracers was critical to the changes announced on Wednesday.

But his claim that the virus, if left unmitigated, would reproduce at an average of five cases for every new infection, is not supported by analysis prepared by Professor McCaw and others for the committee. Professor McCaw said the reproduction rate of the current outbreak peaked at just above 2 – before Victoria’s outbreak response began – and was now hovering just below 1.

Professor McCaw said the most alarming aspect of this outbreak was not the behaviour of the virus but the fact it had circulated undetected for weeks.

He supported the decision to extend the lockdown to ensure every infected person was quarantined and not able to seed new chains of transmission.

“The people who say this virus is spreading in new ways, and we should all be terrified are unhelpful,” he said. “To the people who say we are overreacting I say, ‘No, we are on a knife edge.’ Because it is so hard to predict this could easily get out of control and the current response is absolutely required.”

Professor McCaw said regular surveys taken by the committee showed Victorians had dramatically reduced their movements since the start of lockdown and were following the rules on face masks, social distancing and other containment strategies.

“The bigger picture is we are doing incredibly well at halting the transmission of a virus which spreads very easily,” Professor McCaw said. “The data reflects an excellent response.”

Based on this advice, a statement released by Mr Merlino warned that “cases will explode” if the virus was allowed to run. “Just walking past someone you’ve never met can mean the virus is jumping to a whole new network,” he said.

Deakin University epidemiologist Catherine Bennett said many of the “fleeting” transmissions described by the government – cases inside a South Melbourne Telstra shop, a Port Melbourne cafe and a Mickleham display home – most probably involved people sharing a confined space for a considerable amount of time.

“If you are standing in a queue inside a coffee shop, for five minutes only, maybe with a couple of infectious people, of course you are at risk of being infected,” she said. “When you walk into Telstra, even if you are trying to ask a quick question, you are there for ages. There is no story here.”

Professor Bennett said the bigger story was that the virus, which has been genomically traced to a man who checked out of a quarantine hotel in Adelaide on May 4, had been in the community for four weeks and not produced an exponential growth in cases.

Six new cases were announced on Wednesday and a further later case was revealed when a second resident of the Arcare aged care home in Maidstone tested positive despite having had a dose of the Pfizer vaccine. The outbreak now stands at 61.

Professor Bennett said the fact Victoria had conducted as many as 50,000 tests a day but found so few cases, with only one person in hospital, suggested there were unlikely to be large numbers of undetected infections in the community.

One of the COVID-positive people the government believes caught the virus via “fleeting transmission” – the woman who tested positive after visiting a display home – was revealed on Wednesday to have since returned a negative test result The Health Department said her case would be looked at by an expert review panel.

The Kappa variant is the new World Health Organisation name given to the B.1.617.1 variant first detected in India. Evidence suggests it is no more contagious – and probably less so – than the variant that fuelled the British epidemic and forced Victoria into a five-day lockdown in February.

When Premier Daniel Andrews announced the February lockdown, he described the variant as a “hyper-infectious” virus that moved at light speed. “This is not the 2020 virus,” he said. “This is something very, very different.”

Victorian health authorities became alarmed at the start of the latest outbreak when early data suggested the Kappa variant had a dramatically shortened serial interval – the average time between a case showing symptoms and a case they infect showing symptoms – compared with other variants. This supported the notion that the virus was faster moving.

Kirby Institute virologist Greg Dore and James Wood, a virus researcher at the University of NSW, believe this was a false reading created by Victoria’s success in tracking the virus and isolating positive cases. As cases, including asymptomatic ones, were detected by the intensive testing campaign and put into quarantine, the average time between cases became skewed.

“There is a bias created by doing a good job,” Associate Professor Wood said.

Professor McCaw agreed: “We have seen comments about the serial interval of this virus being shorter. There is no evidence that is the case at all.”

Transmission of COVID-19 between people who have only brief contact with one another is less likely than transmission between family members and workmates but not unprecedented. NSW Chief Health Officer Kerry Chant cited the spread of the virus between two people at a BWS bottle shop during Sydney’s outbreak late last year as an example.

“We have captured the moment of exactly the point of transmission and it was actually very fleeting,” Dr Chant said. She said that although the variant appeared to be a “more transmissible strain in general”, it was also unpredictable.

The fickle nature of Melbourne outbreak is demonstrated by the first known case, the returned traveller who quarantined in Adelaide.

He brought the virus into Melbourne but did not pass it on to the people he lives with or works with. Contact tracers are yet to establish any link between the man, who returned to Melbourne on May 4, and the next positive case confirmed on May 24.

ANU infectious diseases expert Peter Collignon, a member of the federal government’s Infection Control Expert Group, told 3AW’s Neil Mitchell that the current outbreak was not behaving significantly differently from any we have experienced before.

He said that with more than 4000 primary contacts, you would expect between 1 and 2 per cent of people to get infected, resulting in between 40 and 80 cases.