Under normal circumstances they make for perfect stay-cation destinations.

But residents in Scottish rural villages and glens have been urging visitors and those wishing to isolate there to stay away.

Signs and blockades have been erected on single track roads and normally popular destinations, with messages such as ‘go home’ and ‘closed’ written across them.

In the Lochaber community of Applecross, residents had placed a large notice along the famous Bealach na Bà road, part of the North Coast 500 route. 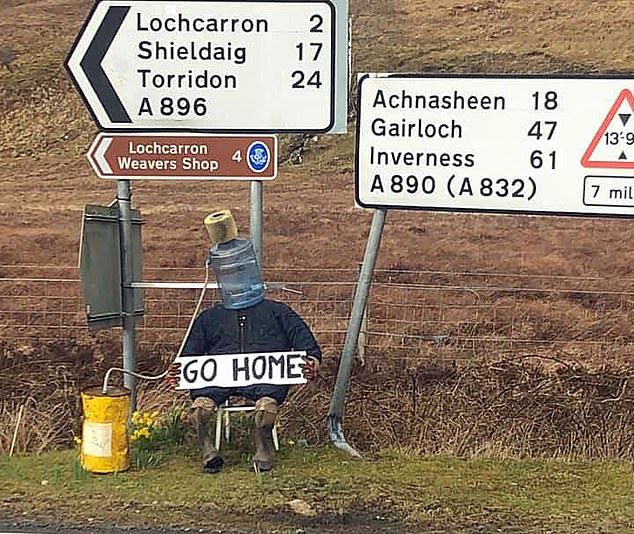 Residents in Scottish rural villages and glens have been urging visitors and those wishing to isolate there to stay away (pictured: Sign in Ross-shire)

Nothing to see here: Bales of hay at John O’Groats stop motorists from making a detour to the Caithness village famous for landmark photos 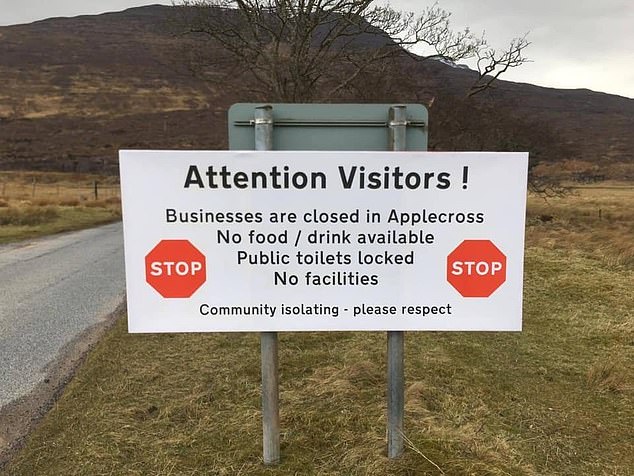 In the Lochaber community of Applecross, residents had placed a large notice along the famous Bealach na Bà road, part of the North Coast 500 route

Further north, locals in John O’Groats, Caithness, have placed hay bales, with the words ‘closed’ written across them, to block off the car park at the popular photo spot.

Near Towford, in Roxburghshire, a home-made sign asking visitors to go home to help stop the virus spreading yesterday.

At the A82 in Ballachulish, near Glencoe, there was a warning to tourists to go home.

A similar notice in Muthill, Perthshire, asked non-residents to ‘turn around’, with another friendly reminder at the village of Balquhidder, Stirlingshire. 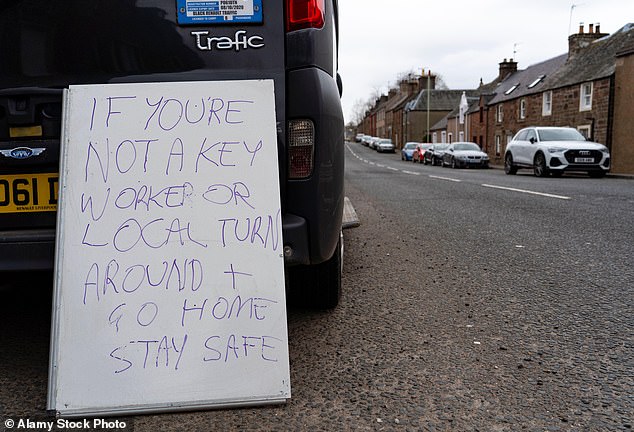 A similar notice in Muthill, Perthshire, asked non-residents to ‘turn around’ 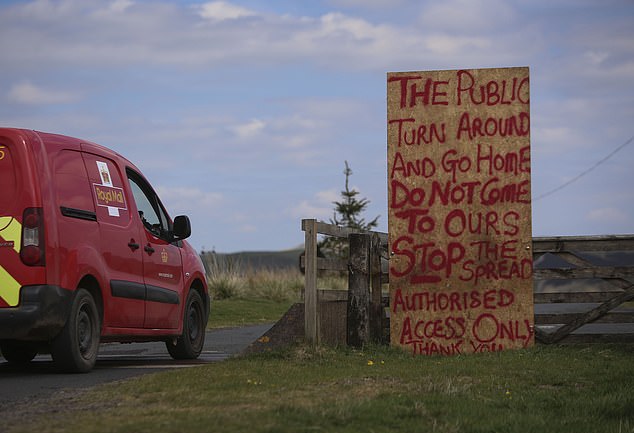 It comes as angry villagers near a popular English beauty spot barricaded themselves in with makeshift roadblocks and plastic fences in a bid to fend off hoards of tourists amid the coronavirus crisis.

Residents living in the Lake District, in Cumbria, are putting out traffic barriers and industrial waste bins across roads – which is against the law – to stop walkers accessing parts of the national park.

Farmers in the area have also set up fake signs in a bid to keep visitors walking past their houses.

One sign in the village of Seathwaite, within the national park, claims there is ‘No entry due to coronavirus’.

Another on the outskirts of nearby Keswick tells visitors the whole town is closed and to ‘come back when we are open’. 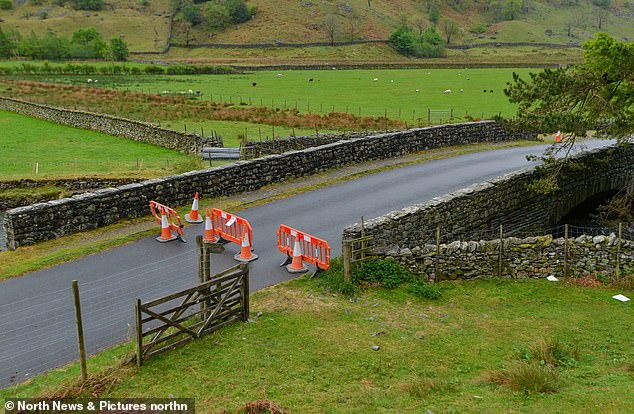 Angry villagers in the popular Lake District, in Cumbria, have barricaded themselves in with makeshift roadblocks and plastic fences in a bid to fend off hoards of tourists amid the coronavirus crisis 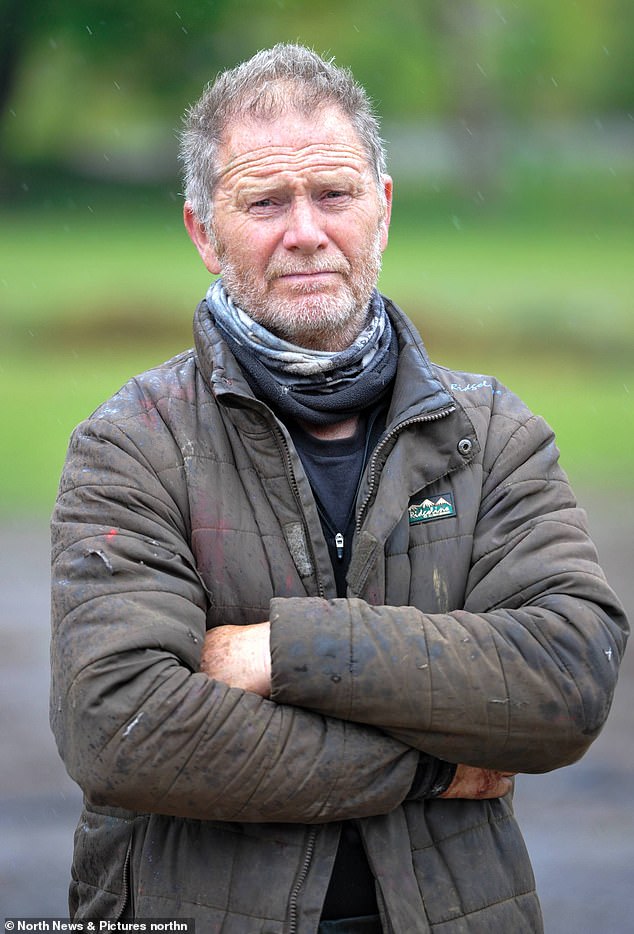 Farmers in the area have also set up fake signs in a bid to keep visitors walking past their houses. Peter Edmondson (pictured), 65, is classed as a high-risk for coronavirus and is concerned about tourists walking near to his home 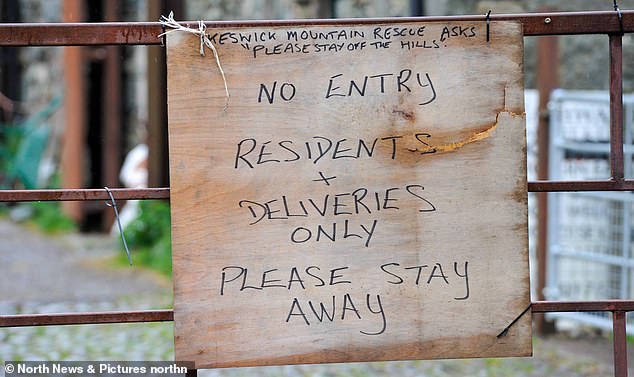 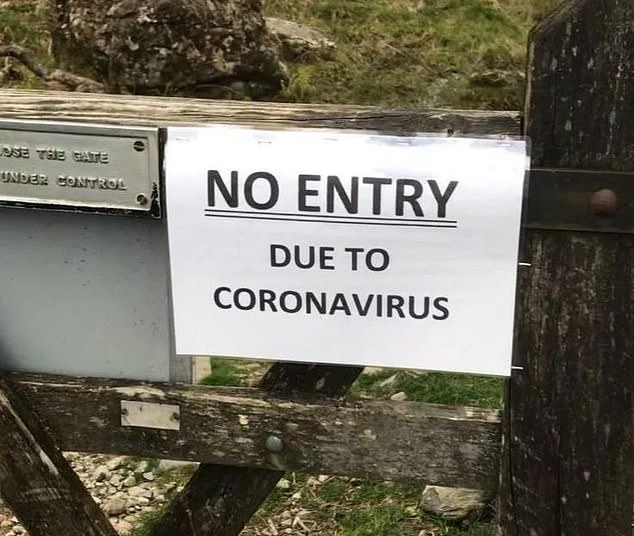 One sign in the village of Seathwaite, within the national park, claims there is ‘No entry due to coronavirus’ 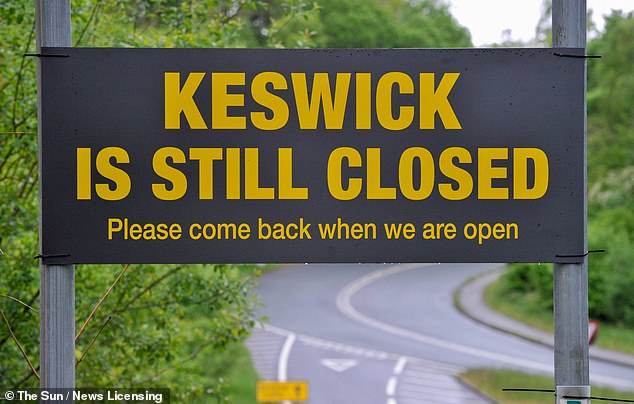 A covidiot driver was fined for breaching lockdown after his 4X4 got stuck in the mud during an off-road spin down a ‘dangerous’ mountain trail.

The motorist needed rescuing after going down a closed track running over mountains in the village of Llanarmon Dyffryn Ceiriog near Wrexham, north Wales.

Countryside officers arrived to tow him free – and fined him for breaking ‘stay home’ coronavirus rules.

Wrexham Rural Police tweeted: ‘The occupants of this vehicle (whose decision-making is as good as their driving) have been reported for breaching covid regulations. Why… Just why.’

The track was closed because of damage done by vehicles using the route for off-road adventures. 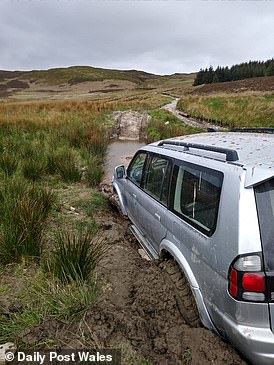 The 4X4 driver needed rescuing after going down a closed track running over mountains in the village of Llanarmon Dyffryn Ceiriog near Wrexham, north Wales

Social media users suggested officers leave the vehicle stuck there – saying getting stuck in the mud ‘serves them right’.

One said: ‘I hope you made them walk home.’

Another said: ‘That’s what you call karma’.

Local councillor Trevor Bates said he was ‘delighted’ the police took action. He warned that the route is so dangerous, and those who go there are ‘big boys playing with their toys’.

He said: ‘The police have done a good job up there but we still occasionally get people driving on there, often they are coming from outside the area.

‘It is not safe, if you take a 4×4 on there you can easily end up at 45 degrees and some parts are so steep that if you go down you could be a goner.

‘The last thing we want at this time is people having accidents on there.

‘They have gone off the main track to get where they are, it’s big boys playing with their toys. There’s no mobile reception up there and if they had have got into trouble it would probably mean the air ambulance coming out.

‘It is a time when resources are needed in the towns really.’

But some residents are still living in fear of Covid-19 – particularly with Cumbria having one of the worst infection rates in the country, despite it being one of the most sparsely populated counties in England.

It has pushed the more concerned among the residents into taking extreme measures – including blocking off roads, which is an offence under the Highways Act.

Residents in other popular tourist areas, including St Ives, Cornwall, have used similar tactics to deter visitors, such as blocking up pathways.

In Keswick, a tiny hamlet in the Lake District National Park, with around a dozen homes, is at the base of one the main trails to England’s highest mountain Scafell Pike.

In the summer thousands of walkers park along the road to scale the famous peak.

However villagers are scared the tourists could bring the coronavirus with them – and have erected the barriers to protect the vulnerable and elderly.

Pete Edmondson, whose family have run the farm in Seathwaite for 104 years, is classed as high risk.

The 65-year-old is missing part of his lung and suffered pneumonia as a child.

He said: ‘As soon as the coronavirus started we put up signs and barriers to stop people coming through the farmyard.

‘But people have no respect, they’ve been taking no notice whatsoever. It’s really upsetting.

‘I find it very threatening, it keeps going through my mind that if I got Covid-19 it would kill me.

‘There’s no consideration or respect for people who are at risk.’

Mr Edmondson says walkers are coming through his yard, and touching gates and styles without washing their hands.

‘We can’t close a public right of way without permission, but you must understand that this is our home,’ he added.

Another local, who did not wish to be named, said they had had people from the Midlands knocking on their doors in the middle of the night last week.

She said: ‘It was because they were lost.

”We don’t want people like that coming through the farmyards. It’s simple as.’

The reason we’ve got the barriers is to stop walkers coming through the yard.

‘We’ve rerouted the footpath. You can still come and walk, we can’t stop that now since Boris Johnson did his new announcement.’

Tourism bosses in the Lake District are also concerned about the relaxation of lockdown.

They’ve urged Brits to stay out of the national park and only exercise locally, despite the new rules. 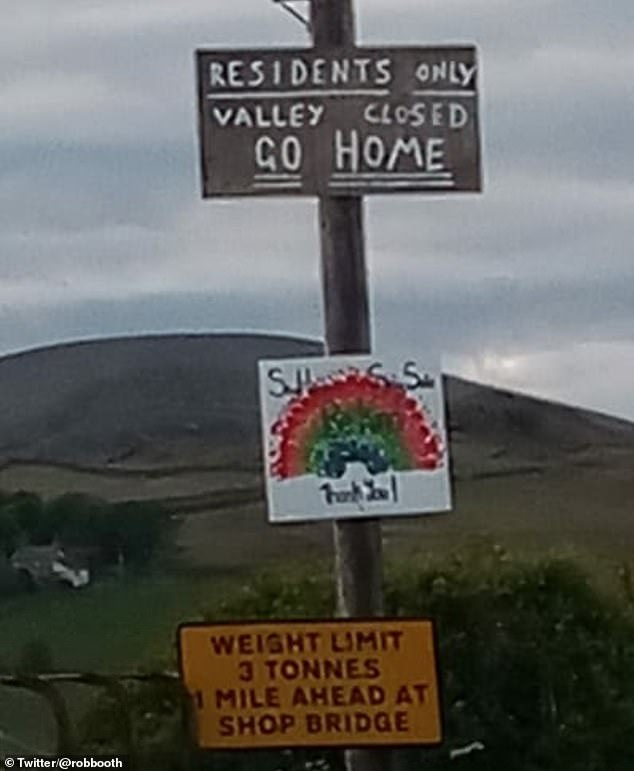 Another sign reads ‘residents only’ and ‘valley closed, GO HOME’

Wilfully obstructing a highway is an offence under the Highways Act 1980.

The law states: ‘If a person, without lawful authority or excuse, in any way wilfully obstructs the free passage along a highway he is guilty of an offence and liable to a fine.’

The maximum fine for this offence is currently set at £1,000.

If the person responsible is convicted of the offence and the obstruction can be moved, but continues, a court can demand that it be removed.

If the person still does not comply, they are guilty of an offence and liable to a fine of an unlimited value.

Richard Leafe, Lake District National Park chief executive, said: ‘Please don’t travel for the moment to the Lake District because of the impact that you will have on the local communities here.

‘Cumbria already has a fairly high incidence of Covid, so there is real concern on the ground about large amounts of people coming back.’

The tourism boss also warned against daytrippers hiking and climbing in the fells.

‘The further you go away from the road, the more likely you are to need to be rescued if you are unlucky enough to have an accident,’ Mr Leafe added.

‘That involves bringing out our volunteer mountain-rescue teams and putting those people at risk themselves – many of whom work for medical services in the NHS.’ 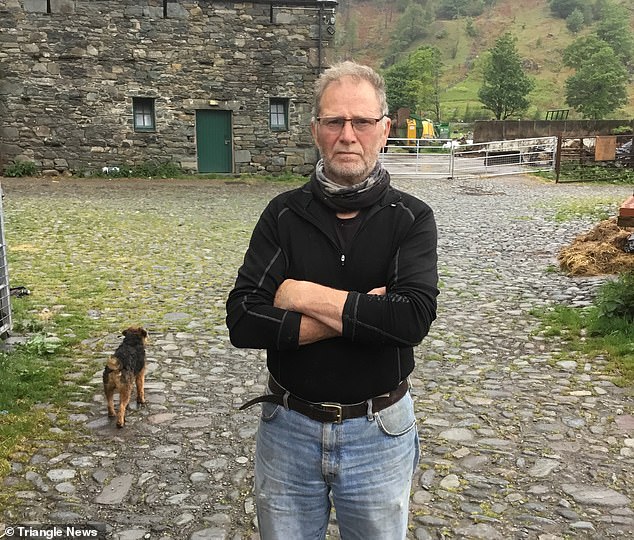 Mr Edmondson says walkers are coming through his yard, and touching gates and styles without washing their hands

‘So I’d really encourage people to exercise locally if they can.

‘The National Park will be here, and we will invite people back as soon as it is safe to do so.’

The National Police Chiefs Council (NPCC), who are the coordination body for law enforcement in the United Kingdom, told the MailOnline it expects more visitors to beauty spots following the government changes to lockdown laws.

A spokesperson said: ‘Forces will be assessing the impact of a likely increase to footfall in town centres and beauty spots in the coming days and weeks, alongside any crime intelligence they receive.

‘We can generally expect to see more movement and activity from the public going forward and much of this will be lawful under the regulations.

‘Police officers will use their discretion and judgement in all situations and will engage with people, encouraging them to return home if appropriate.’

‘Officers will respond appropriately and will investigate concerns made by communities. 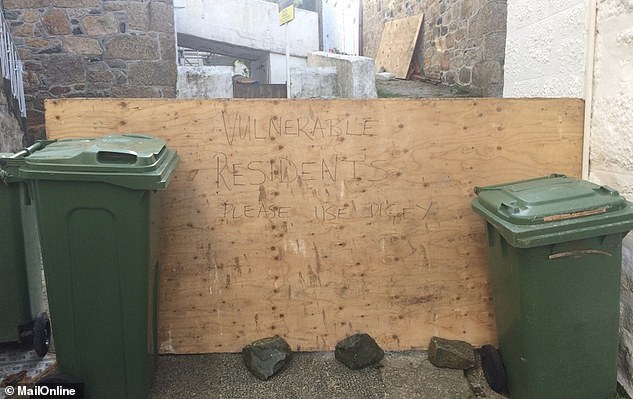 A block stopping people going down a pedestrian-only street in St Ives, Cornwall, asking them to use an alternative route instead to avoid vulnerable people

The spokesperson added: ‘We understand that this is a challenging time for everyone and want to assist members of the public in navigating what the recent changes to the regulations now mean.’

Meanwhile bosses at the Country Land and Business Association (CLA) have urged tourists to ‘be conscious’ when visiting beauty spots.

CLA President Mark Bridgeman said: ‘We fully recognise that the nation will want to make the most of our beautiful countryside following lockdown restrictions being eased. 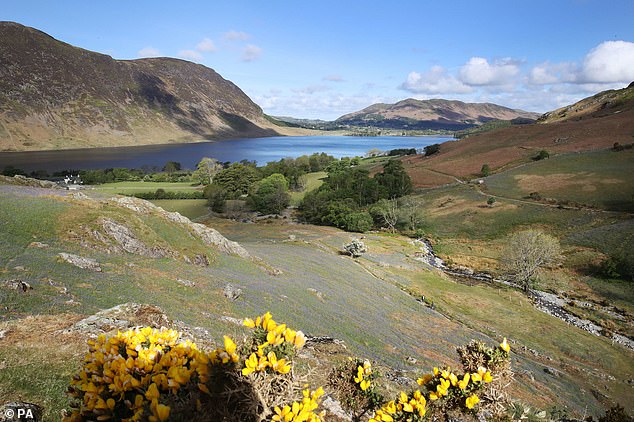 ‘Those using the countryside should, especially under current circumstances, be conscious that it is also a place of work where the land, livestock, machinery, wildlife and environment must be respected.

‘Following advice from Defra and Public Health England, we urge the public, when on their daily exercise, to maintain social distancing requirements, keep dogs away from livestock and leave gates as they find them.’

‘We are also calling on the public to be pragmatic and avoid hot-spot tourist areas that are particularly busy this time of year. It’s important that we all act responsibly and check car parks, for example, are open before travelling.’