CIA documents detail the extraordinary moment US fighter jets allegedly chased a group of UFOs over a nuclear base before the objects flew off into space.

The declassified files, released under a freedom of information request, say the mysterious phenomena was detected on radar near Malmstrom Air Force Base, Montana, in November 1975. 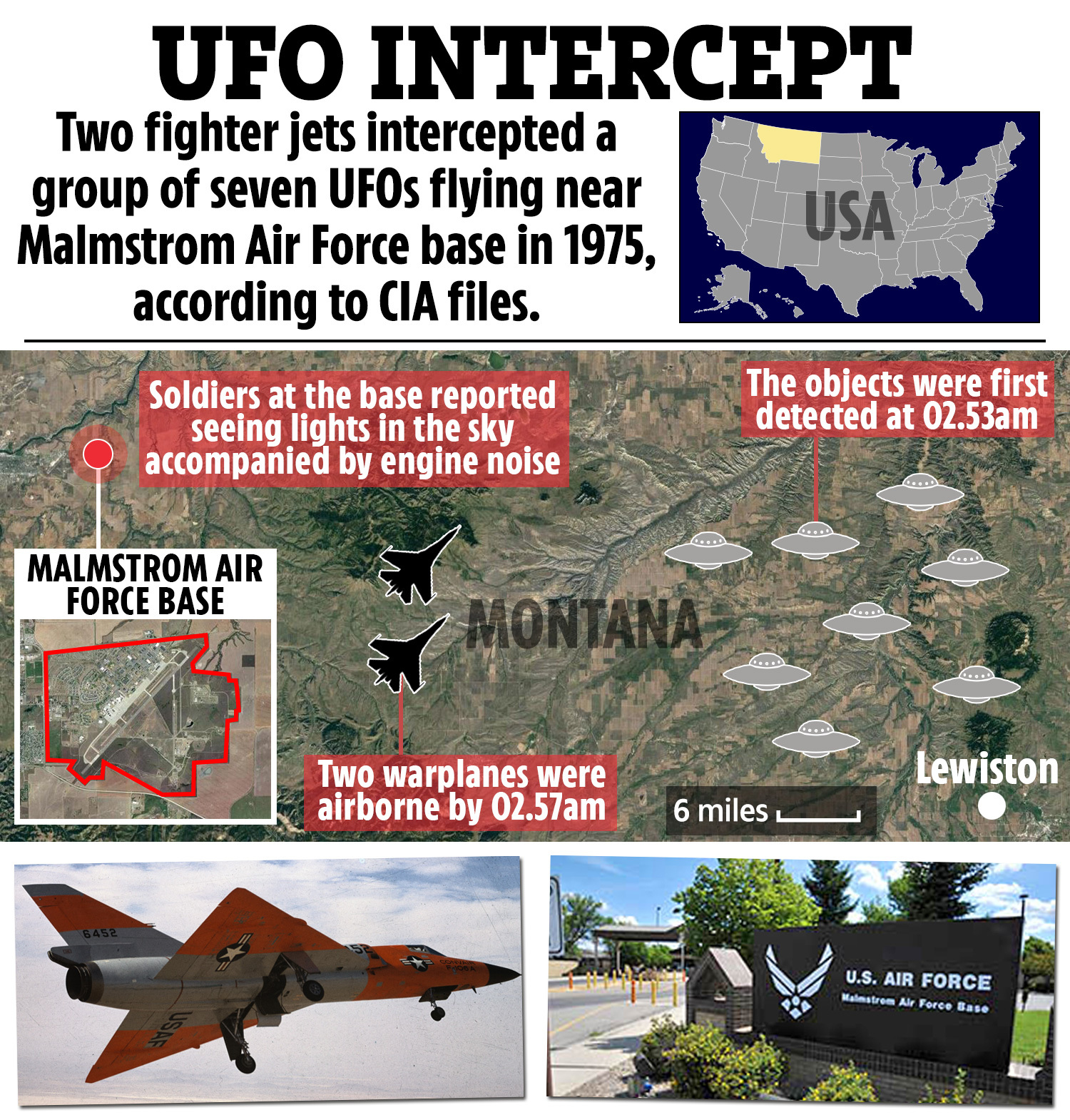 It is the the same facility where US Air Force captain Robert Salas claims ten nuclear missiles were disabled by a UFO eight years earlier in 1967.

The document was released from the CIA files but appears to have been prepared by the National Military Command Center (NMCC), a top department at the Pentagon.

It details the incident from November 8, 1975, where two F-106 interceptors were scrambled after seven objects were detected on radar near the nuke base.

The fighter jets gave chase – only for the objects to then vanish before reappearing and one then hurtled into space "rapidly".

Witnesses on the ground also reported seeing lights and hearing the sound of engines during the sighting which took place near Malmstrom and the town of Lewiston over the course of 72 minutes.

No other aircraft were known to have been in the area and the NMCC determined the encounter was "unknown" – with the document signed off by Brigadier General William D. Barnes.

The document was released by The Black Vault, a project which hosts millions of the US government's declassified files, who said the incident in Montana is one of many.

A spokesman told The Sun Online: "The 1975 Malmstrom case was only one, of quite a few, that chronicled UFOs over sensitive military bases and nuclear weapon storage facilities, all which had no plausible explanation.

"Flying over these types of bases with no way to be intercepted and no identification, is by definition a ‘national security threat'."

It comes after Captain Salas and a number of other former servicemen held a landmark press conference last month about their UFO experiences – urging the Pentagon to come clean.

Witnesses reported seeing "lights in the sky and the sounds of jet engines similar to jet fighters" as the objects appeared on the base's radar screen.

But officials from the base said "no jet aircraft" were spotted within 100 nautical miles of the UFO sighting.

Two F-106 jets were scrambled to intercept the UFOs sparking a chase as the objects reached speeds of up to 172mph (150 knots).

For decades, the US military wanted the public to believe they were ignoring such cases, or that they did not even exist.

And despite seven initially being detected, radars then only sighted two of the shapes.

The documents state: "0253 EST Malmstrom AFB Montana received seven radar cuts on the height-finder radar at altitudes between 9,500' and 15,000'.

"Cross-tell with FFA revealed no jet aircraft within 100NM of the sightings.

"Objects could not be intercepted. Fighters had to maintain a minimum of 12,000' (feet) because of mountainous terrain.

Witnesses said the UFOs turn off their lights during the chase which then came back on after the fighter jets returned to base, according to the CIA files. 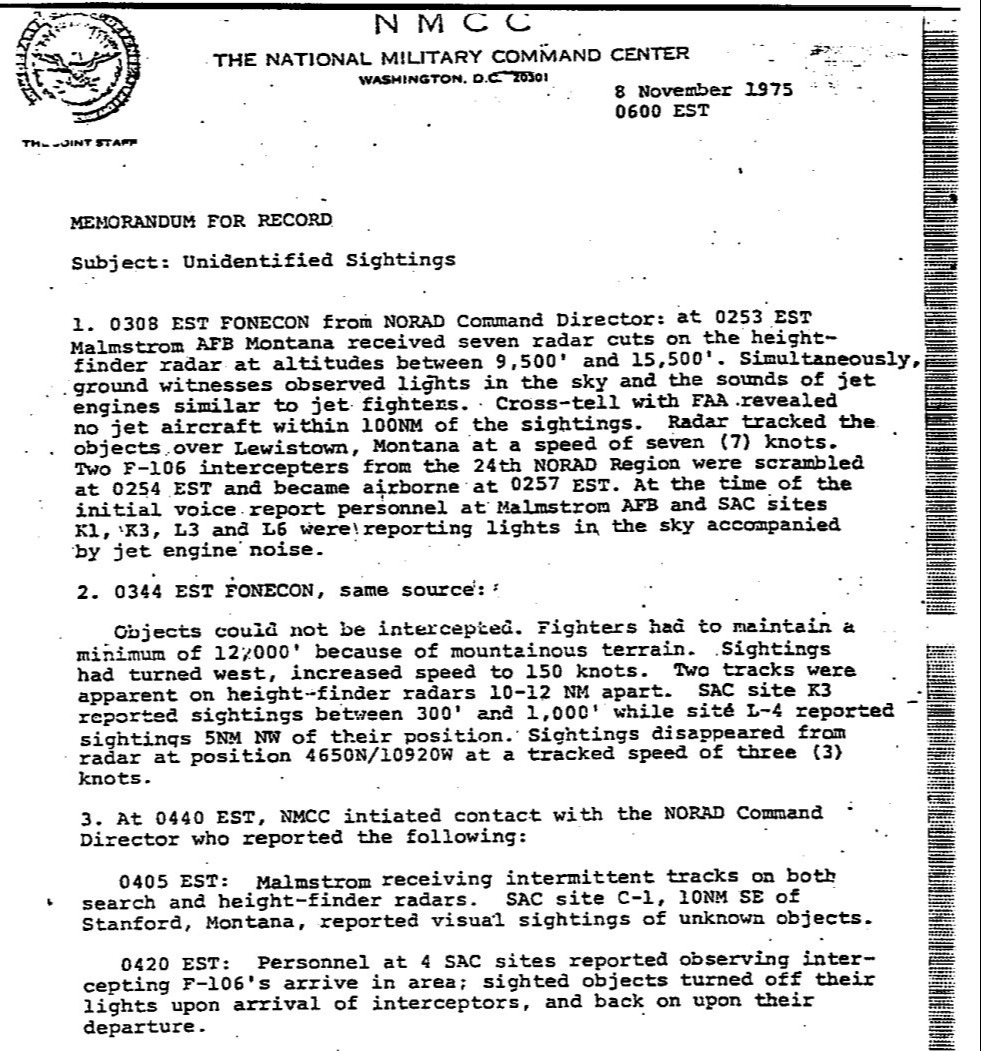 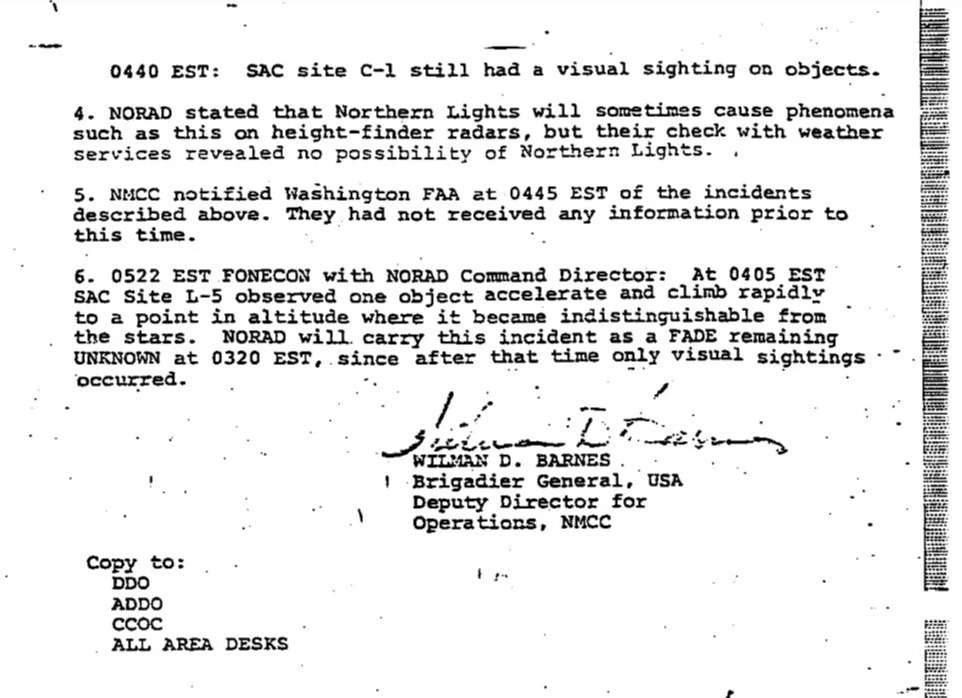 "0420 EST – Personnel at 4 SAC sites reported observing intercepting F-106's arrive in area; sighted objects turned off their lights upon arrival of interceptors, and back on upon their departure," the docs said.

Officials said weather services confirmed "no possibility of Northern Lights" being the cause of the darting objects in the sky.

The documents finish by saying one of the UFOs was seen flying off into space.

"At 0405, SAC Site L-5 observed one object accelerate and climb rapidly to a point in altitude where it became indistinguishable from the stars."

Another alleged UFO encounter at Malmstrom on March 24, 1967 resulted in a raft of nuclear missiles being deactivated.

But Captain Salas said the simultaneous shutdown was an "impossible" occurrence because the ten nuclear Minuteman rockets were all running on independent systems.

The "attack" implied a level of sophistication that no human at the time possessed, he says.

Salas told The Sun Online: "I can only speculate as to why it happened.

"I think it was simply a message to all of us on Planet Earth that we need to rid ourselves of nuclear weapons."

The Black Vault spokesman added: "It is secured airspace for a reason, and when encroached upon, the US military should be able to take care of the problem with the best tools in their arsenal.

"The problem was – they couldn’t. They couldn’t catch it, identify it, or get rid of whatever problem it was.

"For decades, the US military wanted the public to believe they were ignoring such cases, or that they did not even exist. However, through legal means with the use of the US Freedom of Information Act (FOIA), we know better."