Secret FEMA charts warn U.S. death toll is STILL going up and will hit 3,000 a DAY by June despite Donald Trump pushing to reopen the economy

The Trump administration is privately projecting the death toll from the coronavirus will reach 3,000 cases daily on June 1 even as the president pushes for a reopening of the economy.

That number is nearly double the current level of 1,750 deaths a day from the disease.

The projections, obtained by The New York Times, are based on modeling from the Centers for Disease Control and Prevention and pulled together in chart form by the Federal Emergency Management Agency. 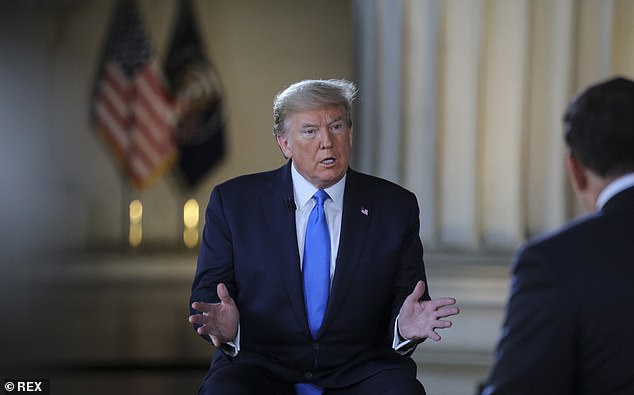 President Donald Trump has pushed for the country to reopen even as new projections show the coronavirus death rate could hit 3,000 per day

And they indicated – despite most of America on stay-at-home orders for the past seven weeks – the spread of the virus has shown no sign of slowing, which means things may get worse when the rest of the country reopens for business.

The White House said the document was not a part of its Coronavirus Task Force.

‘This is not a White House document nor has it been presented to the Coronavirus Task Force or gone through interagency vetting. This data is not reflective of any of the modeling done by the task force or data that the task force has analyzed,’ deputy press secretary Judd Deere said in a statement.

‘The President’s phased guidelines to open up America again are a scientific driven approach that the top health and infectious disease experts in the federal government agreed with. The health of the American people remains President Trump’s top priority and that will continue as we monitor the efforts by states to ease restrictions,’ he added.

The United States has 1.19 million cases of the virus and more than 68,000 people have died from it.

President Donald Trump acknowledged on Sunday that the number of deaths could top 100,000.

‘Look, we’re going to lose anywhere from 75, 80 to 100 thousand people,’ he said during a virtual town hall sponsored by Fox News.

But, he argued, there were people out there who want to get back to work.

‘People are absolutely scared, but there are other people that are scared about being locked in a room and losing their job and not having an income,’ he said.

‘I think you can really have it both ways,’ Trump said.

And Dr. Deborah Birx, who is coordinating the coronavirus response for the White House, said there could be up to 240,000 deaths.

‘Our projections have always been between 100,000 and 240,000 American lives lost, and that’s with full mitigation and us learning from each other of how to social distance,’ she said on ‘Fox News Sunday.’

President Trump has been itching to get businesses open and the economy restarted as more than 30 million Americans applied for unemployment benefits in the last five weekly filing periods – meaning that at least 4 per cent of Americans are unemployed. 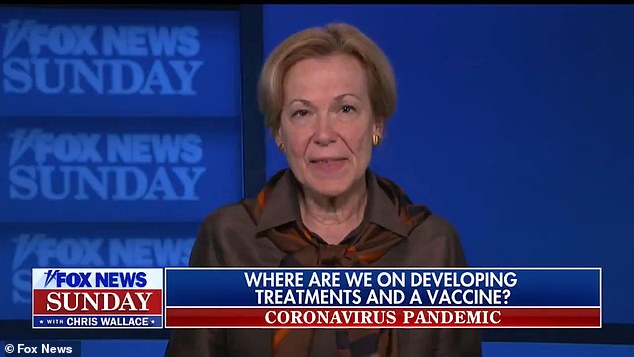 Dr. Deborah Birx, who is coordinating the coronavirus response for the White House, said there could be up to 240,000 deaths 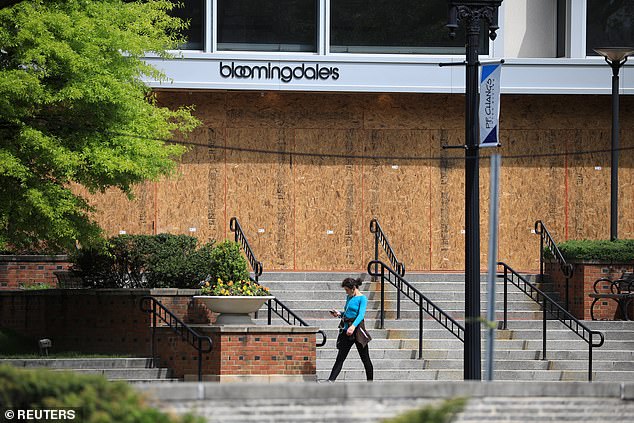 A pedestrian walks past a closed Bloomingdales store covered with plywood, at the Wisconsin Place shopping center, as the coronavirus outbreak continues in Washington state

Economic experts have predicted that the U.S. Gross Domestic Product could drop by 30 per cent, spelling more financial disaster as fallout from the pandemic and that unemployment could reach all-time highs of upwards of 13 per cent.

Trump administration officials have pushed an optimistic message even amid the troublesome numbers.

‘We’ll see things better in the third quarter, better in the fourth quarter. And as the president said, we’ll be back to a great economy next year,’ Treasury Secretary Steve Mnuchin said Monday on Fox Business News.

But medical experts have warned that reopening the country too quickly could lead to a second wave of the coronavirus that could be even worse than the first.

Millions of Americans lost their jobs or were furloughed as companies and small businesses all over the country downsized, severely decreased services or were forced to close in the midst of the coronavirus outbreak.

The government already has allocated $2.7 trillion to help ease economic relief and there could be more to come as Democrats and Republicans begin negotiations on another round of legislation.