Eight out of 10 infected patients have died in one hospital in the South West — but just 12.5 per cent succumbed to the illness in a London trust.

The data, seen by The Guardian, showed more than half of Covid-19 patients have died in at least 11 hospital trusts across the country.

Data from a study presented to government scientists last month showed the death rate for hospitalised patients is 28 per cent across the UK, on average.

But information being sent to senior doctors, which the NHS denies is official, shows that this varies wildly between hospitals.

Twenty-six NHS trusts had death rates lower than a quarter — between 12.5 per cent and 25 per cent. But rates were higher at the remaining 109.

Experts said the huge disparity in death rates did not necessarily mean patients were getting worse care, but that it could be a consequence of the population in the area or the number of patients they had treated.

Older people are more likely to die from coronavirus and some regions have far more older people — the average age in the South West, for example, is eight years higher than it is in London.

NHS England said it did not produce the data — which the newspaper said had been adjusted for age — and say they appear to be ‘experimental’. 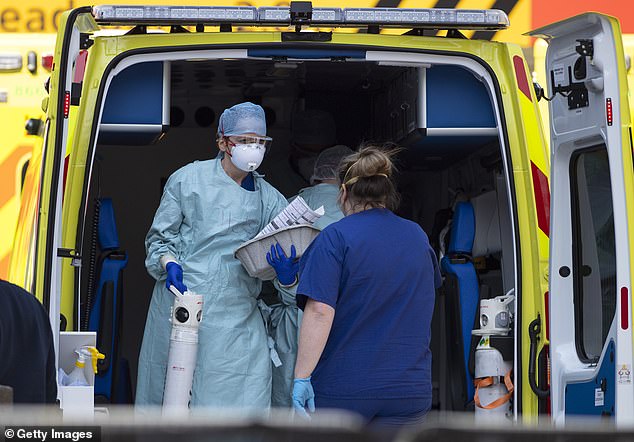 Hospitals across the country have varying death rates from coronavirus, according to secret NHS data (stock image)

The NHS data showed that two of the five hospital trusts with the highest death rates were in the South West — one with 80 per cent and another with 62 per cent.

Specific trusts were not named in the report, The Guardian said, and were referred to only by the region they were in.

Other hospitals where more than half of patients were dying included one in the North West (68 per cent), the East of England (60 per cent) and one in London (54 per cent).

Dr Alison Pittard, chief of the Faculty of Intensive Care Medicine, told the newspaper: ‘That is a huge variation, a huge range.

‘I’m surprised at the degree of variation. A spread between 12.5 per cent and 80 per cent is quite stark.’

She added: ‘We know that poorer communities and BAME communities have a higher risk of mortality, so if a trust is in an area of higher-risk individuals you would expect that trust’s Covid-related mortality rate to be higher.’

The exact factors that have played into some NHS trusts having significantly higher death rates are not clear.

The ethnicity of patients in a NHS trust’s area, how wealthy they are and their general health are all contributing factors.

HOW DO OFFICIAL DEATH RATES COMPARE BY REGION?

These should include all hospital patients but also include people who have tested positive and died outside of hospital.

This is how the regions break down:

Data has shown non-white people, those in poorer areas and people with existing health conditions are all more likely to die if they catch Covid-19.

Hospitals with small numbers of patients may also have an artificially high death rate because an increase of one could push the average up significantly.

The NHS data gives a breakdown of 135 major hospital trusts around the country and calculated how many of the diagnosed patients died, to get a rate of death.

It is not publicly available, however, so it is unknown whether some regions’ hospitals were suffering significantly more fatalities than others.

NHS England denied that it had produced the data.

It said in a statement: ‘We do not recognise these figures, which appear to be experimental analysis of unverified data, but there is now a wide range of published data on the role that health inequalities, including pre-existing conditions and other health factors, have played when it comes to the impact of Covid, including from the ONS and PHE.

‘The NHS is accelerating work to tackle health inequalities, and will shortly be providing local services with a range of actions they should build in to their plans for the coming months.’

Public Health England publishes weekly data showing how deaths break down by region, which shows that London has the highest overall death rate for all patients.

The lowest regional death rate has been in Yorkshire and The Humber, where 13 per cent of people officially diagnosed have died. 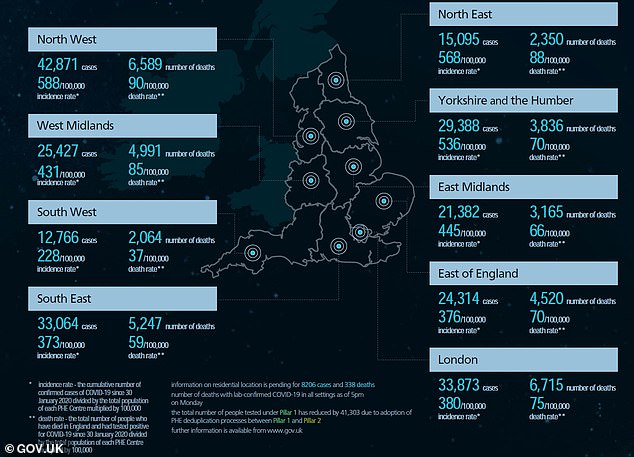 Separate regional data from Public Health England shows that London has the highest death rate among people who have officially tested positive for Covid-19. There, 19.8 per cent of patients have died

Government papers published last week after being presented to officials in June showed that the average hospital death rate has been just over a quarter across the UK.

Deaths were higher for people admitted to intensive care, of whom 35 per cent succumbed to the disease, and even higher for those who had to be put onto ventilators – 42 per cent.

The COVID-19 Clinical Information Network (CO-CIN), comprised of university experts from around the UK, presented the results to SAGE – the Scientific Advisory Group for Emergencies – on June 22.

The study had found people spend an average of nine days in hospital if they are admitted with coronavirus, or catch it while on a ward.

Some 16 per cent of patients require high-flow oxygen therapy to help them breathe.

The most common symptoms for hospital patients are coughs (63 per cent), fever (62 per cent) and shortness of breath (61 per cent) – but a worrying one in 16 people (6 per cent) claimed to have had no symptoms at all, the study found.