Serial rapist, 39, attacked girl, 17, after convincing Parole Board he could be freed from life sentence for similar attack

A serial rapist attacked a 17-year-old girl just months after convincing a Parole Board he wasn’t a threat so he could be released from a life sentence for a similar attack 14 years ago, a court has heard.

William Trotter, 39, hit his victim around the head with a blunt object, strangled her until she lost consciousness and brutally raped her in undergrowth along a street in Bromley, London.

He denied rape and kidnap with intent to commit a sexual offence but was convicted by a jury at Croydon Crown Court and sentenced to to life, serving a minimum of 12 years before he can apply for parole.

Trotter attacked his teenage victim on March 19, moments after they both got off the N199 bus to Bromley, south London.

He was previously jailed in 2006 but was released last year after convincing a parole board he was no longer a risk of sexual offending.

Nine months after he walked free, Trotter pulled on the pink face covering and spoke to the girl on the bus. He got off with her at the same stop and pretended to head in the opposite direction but turned round and ran after her. 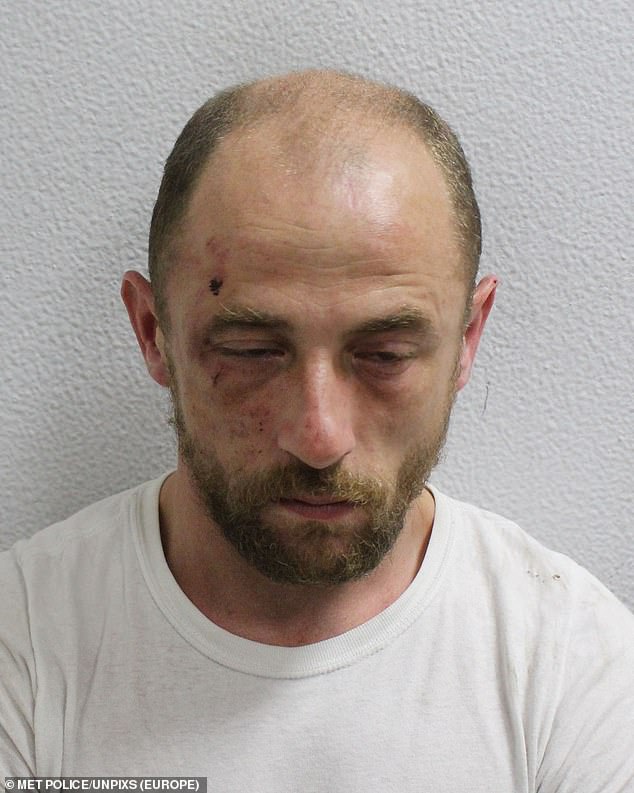 William Trotter (pictured), 39, hit his victim around the head with a blunt object, strangled her until she lost consciousness and brutally raped her in undergrowth along a street in Brixton, London, on March 19

The girl was walking past Southborough Library bus stop and turned right down Southborough Lane towards Turpington Lane. Trotter hit her over the head with a blunt object and grabbed her around the throat.

She screamed but he dragged her into the undergrowth and raped her. Residents heard her screams and called the police who arrived four minutes later as the woman was staggering out.

James Thacker, prosecuting, said: ‘The extent of the violence used here was sustained and significant, and could probably be regarded as extreme.

‘She was vulnerable and this was known by this defendant when he decided to follow her, abduct and rape her.’

Officers spotted Trotter and chased him through nearby woods – but lost sight of him as he scrambled over a wall into an allotment.

The offence was almost identical to the one he carried out in 14 years ago. Trotter had been drinking cans of strong lager all day before launching his latest attack.

He told her: ‘I just want to look at you, I don’t know what I’m doing.’ Trotter added: ‘Why do you have to be so nice, I can’t do it’ before he kissed her.

She tried to reason with him asking if he had a wife or sister and he lied, saying he had two daughters. He pulled her by the hair onto the ground, hit her head against the wall and started to strangle her. 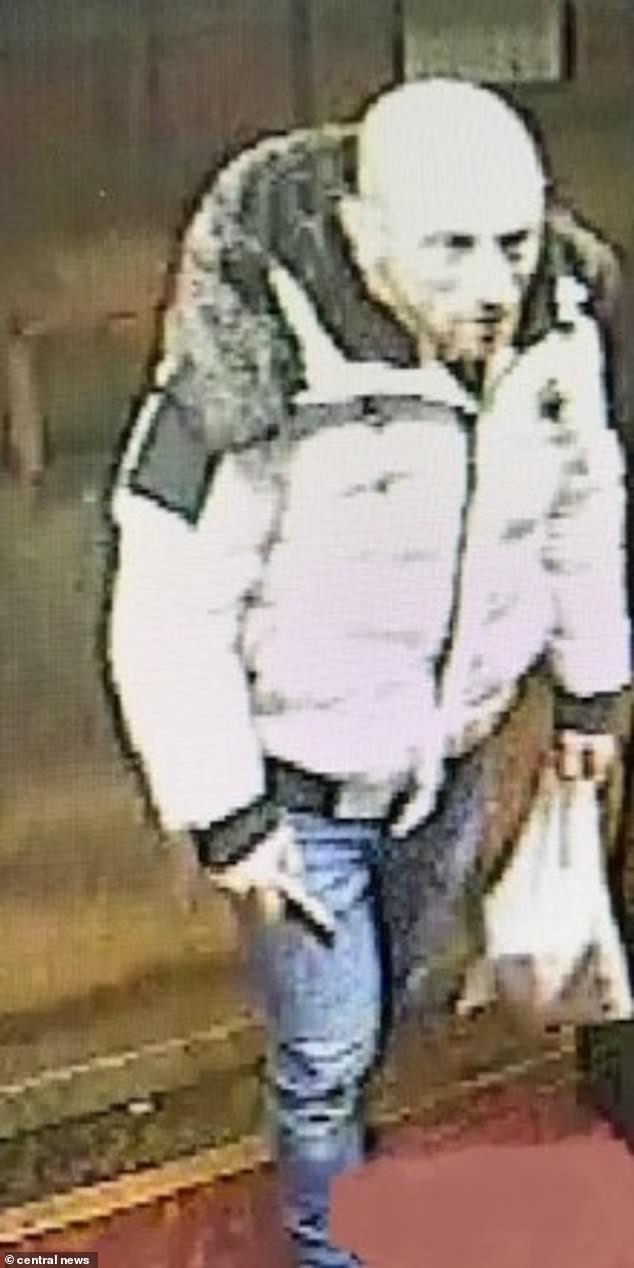 He was previously jailed in 2006 but was released after convincing a parole board he was no longer a risk of sexual offending. Pictured, police released CCTV image of Trotter as they launched a man hunt to find him earlier this year

When she told him she could not breathe he said: ‘I don’t care, I’ll kill you, you’re nothing to me.’ Trotter dragged her along the ground and told her to kneel down while he was groping her backside and thighs.

During the ordeal that followed Trotter told her to put her head on his shoulder so they looked like a normal couple. He twice raped his screaming victim while apologising to her, before she managed to run home and call the police.

Trotter was arrested six days later after DNA from his semen found in the victim’s knickers matched that on his police file. Trotter admitted four charges of rape but claimed he could not remember the attack.

He was given an indeterminate sentence which meant that he could be kept in jail for life. Trotter was first released on 13 June 2014, but committed further offences including aggravated vehicle taking on 18 October of that year.

He was jailed for 20 months and served half before his release from jail in June 2019.

Trotter insisted he was a changed man in a series of interviews and was given his freedom subject to ‘close monitoring.’ He fled to Glasgow after the latest attack and moved in with a relative, lying about the reason for his sudden appearance.

When police launched an appeal they said he had a tattoo of a ‘devil gremlin’ with the name ‘Daniel’ on his right arm. A Metropolitan Police Service spokesman said ‘a possible line of inquiry’ was that he was wearing the mask to hide his identity rather than to repel the coronavirus.

After a nationwide manhunt, Trotter was finally tracked down when he moved back to London. Trotter, dressed in a grey tracksuit and beanie, had denied rape and kidnap with intent to commit a sexual offence but was convicted by a jury.

Reading a statement from the witness box, his latest victim said: ‘I was brutally attacked and raped. I have been plugged into a nightmare I have not been able to wake from. He strangled me until I was unconscious and that only ended when the police managed to arrive.

‘It’s a feeling I can only describe as terror and I wouldn’t wish it on my worst enemy. My 18th birthday was destroyed. My happy childhood memories were taken away from me.

‘Before the attack, I was a very confident and sociable person. That was all taken away from me when William Trotter took away my confidence, happiness, and innocence.’

Her father, breaking down in tears, said: ‘As a father, I remain the most angry and confused that I have ever been in my life. I do not forgive and I will not forget Trotter.’

Passing sentence, Judge Elizabeth Lowe told the rapist: ‘You identified her as a target within seconds of seeing her.

‘You were chasing after her at speed. When you got within distance of her you struck her with immense power, dragged her into the bushes where you violently raped her.

‘You grabbed her around the throat. Throughout the ordeal, she was drifting in and out of consciousness and you told her to shut up or you would f-king kill her.

‘It was only the arrival of the police that caused you to stop what you were doing.

‘The acts of physical violence that you committed were horrific, her face was covered in blood, her hair was matted from the material of the ground.

‘You’ve demonstrated absolutely no remorse for your actions.

‘You evaded the police. You thought you had gotten away with this for a week or so. When you were finally apprehended on 9 April you pretended to be someone else and then tried to escape from the police and were detained.’

Judge Lowe said Trotter had committed the violent sex attack after convincing the parole board he was no longer a risk.

The judge continued: ‘You were subject to close monitoring when you committed this offence. It’s without hesitation that I consider that there are significant risks to members of the public. You are an extremely violent serial sexual predator.

‘A life sentence is clearly well justified in this case. I observe no mitigating features which merit downward adjustment.’

Trotter, from Bromley, was sentenced to life and will serve a minimum of 12 years before he can apply for parole.

He must keep police informed of personal particulars including any address he may live at if ever released from prison.