Some High Street shops will open 24 hours a day in December in a desperate bid to offset the £900million a day economic hit of the new tier restrictions.

Primark has decided to open 11 shops around the clock, with other chains extending hours until late into the night.

The attempt to recoup Covid-19 losses comes as the Centre for Economics and Business Research estimates the tier system will cost the economy in England £900million daily up to Christmas and beyond.

Some High Street shops will open 24 hours a day in December. Shoppers are pictured above on London’s Oxford Street at the start of this month

CEBR research estimates that the new tiers will result in England’s gross domestic product being 13 per cent smaller compared with December last year.

Overall in December, which is a short working month, the economic hit is expected to be £20billion compared with the same period in 2019.

It comes as ministers are said to be considering more cash support for restaurants, pubs and other businesses hit by the restrictions, The Daily Telegraph reported.

The economic case for the new tier system will be set out by ministers today. Amid threats of rebellion from Tory MPs, Downing Street will publish impact assessments to reveal how it decided what restrictions each area of the country will face when the tier system comes into force on Wednesday.

Non-essential stores and services will be able to reopen, but more than 34million people are facing tougher restrictions than before the national lockdown. 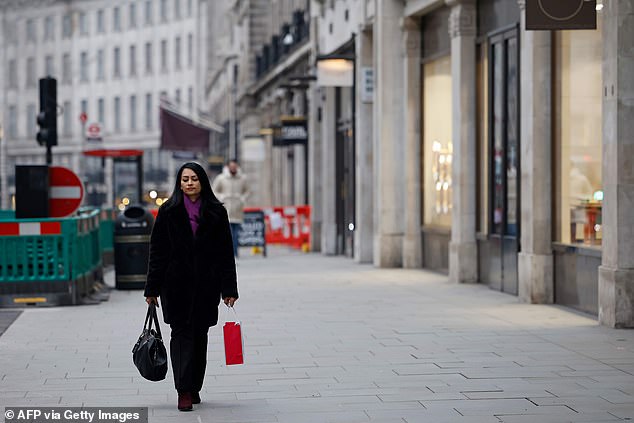