"Significant" workplace bullying is experienced by about one in five Ambulance Victoria paramedics, and nearly one-third told researchers they struggled to cope with work conditions.

As the Victorian Equal Opportunity and Human Rights Commission prepares a sweeping inquiry into workplace abuse and harassment and WorkSafe examines bullying and safety at the service, a study of 663 ambulance employees found more than two-thirds stay silent "for fear of retribution". 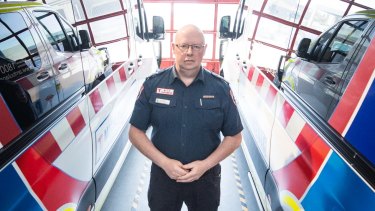 CEO of Ambulance Victoria, Tony Walker, vowed to stamp out bullying, harassment and sex discrimination at the service after ‘The Age’ reported the issues in October.Credit:Jason South

Peter Holland, a human resources management professor at Swinburne University's faculty of business and law, led a two-university team who analysed a September survey of ambulance staff as part of his long-term research into healthcare work practices.

He has done three studies on the nation's nurses and is conducting studies on paramedics and nurses in Wales.

The survey was completed before The Age revealed in late October that widespread claims of sexual harassment, gender discrimination, bullying and abuse had caused paramedics to consider suicide.

The report, Workplace Climate and Wellbeing of Victorian Paramedics, found 36 per cent had experienced "intimidatory use of discipline or competence procedures" by their supervisors, and "bullying appears both ingrained and systemic … for a significant number of paramedics". But the issues were "often left unaddressed" by senior management.

Of the two-thirds who stay silent, 78 per cent said "futility of getting change" was a main reason.

Women were significantly more likely than men to stay quiet because of fear of negative consequences and because "it would make me vulnerable in the face of colleagues and line managers".

Professor Holland approached the Victorian Ambulance Union to advertise the independent survey and conducted it with Dr Julian Vieceli and Dr Lara Thynne at Swinburne and Dr Tse Leng Tham of RMIT.

They found people in the state's ambulance service "fear making a statement" about workplace issues and "feel why bother; they might give you the rhetoric but nothing will happen".

The level of negative experiences was "very high".

Some 29 per cent reported "persistent attempts to belittle or undermine your work" by their supervisor, 44 per cent experienced this by a colleague, and 38 per cent said their supervisor withheld "necessary information".

"That's basically setting them up to fall over," said Professor Holland. "If I don't tell you how to do something then you will muck it up and then I can say, 'you mucked that up, didn't you'?' It's a deep, cynical type of bullying."

Paramedics said they were highly engaged with and enthusiastic about their work, but this could be eroded by a "perception of futility particularly with regards to resolving issues pertaining to bullying and sexual harassment".

They left comments such as "support has never been less available", and "our managers don't care".

She reported "active discrimination and instances of abuse in our workplace", including "horrible instances of sexual misconduct".

Ms Piggott was among more than 40 paramedics who told The Sunday Age about bullying, harassment and "a culture of retribution".

Mr Lay and Ambulance Victoria CEO Tony Walker met with the state Human Rights Commissioner, Kristen Hilton, the next morning and asked her to commence an inquiry.

It's exceptional and a concern. There is significant distrust in senior management.

Professor Holland found more than a quarter (29 per cent) indicated they were looking to leave the profession in the longer term, and four in 10 would look for a new career in the future.

"It is exceptional and a concern," he said of the findings. "There is significant distrust in senior management."

Victorian Ambulance Union secretary Danny Hill said while the study was completed independently of the union, it "resonates with what our members are telling us: they are afraid to speak up, this data reflects that is a very live fear and just how much people feel that way".

"That people are feeling nothing will happen, to me that's just really sad. It's an indictment on the workplace culture that 'if I do bring things forward, I end up being the one who is targeted'," he said.

"They love the work and they love the job but the responses to that question were quite devastating really."

The VHREOC is expected to release the terms of reference to its independent inquiry, including the method by which it will gather confidential testimonies from paramedics, this month.

People who have experienced discrimination or sexual harassment can contact the VHREOC's inquiry line on 1300 292 153 for more information about their rights and how they can make a complaint.