Sixteen homeless people in England have died of Covid-19 during country’s crisis – more than are normally killed by alcohol or suicide, official data shows

An Office for National Statistics report showed more homeless people died of Covid-19 than were expected to have been killed by alcohol poisoning or suicide – two of the leading causes of death – during the same period.

One leading charity said the deaths were a ‘tragedy’ but praised local councils for stepping in to protect vulnerable people and ‘undoubtedly’ saving many lives.

There are around 280,000 people in the UK who are classified as homeless, according to the charity Shelter, including those in temporary accommodation.

In March the Government urged councils to get all rough sleepers off the streets and put them up in hotels and B&Bs to protect them from the coronavirus.

More than three quarters of homeless people (78 per cent) say they have health problems, the charity Crisis says, and many struggle to get access to medical care, making them especially vulnerable to infection.

The ONS, in preliminary statistics released today, found that six out of the 16 Covid-19 deaths happened among people living in London, with three in the North West. There were no homeless coronavirus deaths recorded in Wales up to June 26.

Most of them were male, the ONS said, and the average age for the men was 58 years old – significantly younger than the average 79 years old for male Covid-19 victims in the general population.

The report did not give details of the female deaths because there were so few the women could be identified by their age and location, it said. 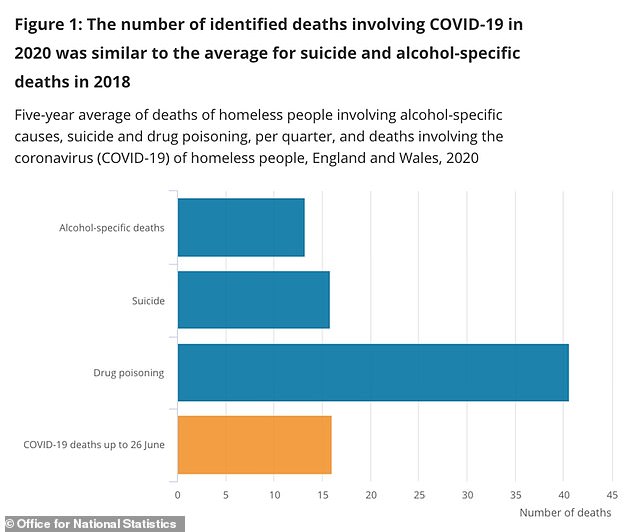 ONS data showed the number of homeless people who have died from Covid-19 has been comparable to the deaths that would normally be expected from suicide, and higher than those caused by alcohol (The figures are not direct comparisons from this year, which are not yet available for all causes of death) 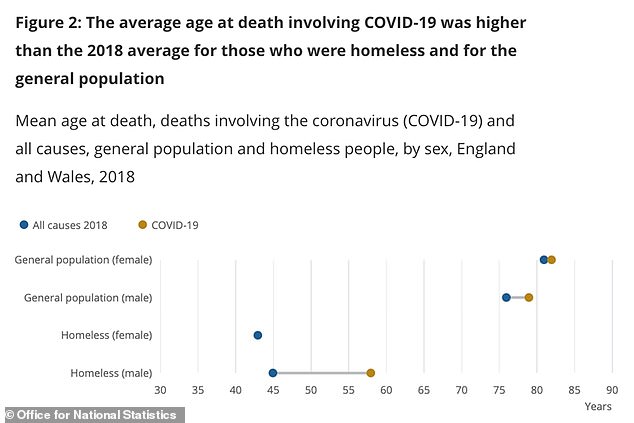 The data showed that homeless men dying of coronavirus were significantly younger, on average, than men in the general population who were dying from the same disease – 58 years old compared to 79

‘Every one of these deaths is a tragedy,’ said Jon Sparkes, chief executive of the homelessness charity Crisis.

‘Behind these figures are individuals, each with families, hopes and dreams.

‘When the outbreak started, it was a stark reminder of the risk people who are homeless face from the virus – with no access to a place to self-isolate nor, in some cases, basic sanitation.

‘The situation could have been much worse had the government, local councils and charities not worked to quickly move many people sleeping rough and in night shelters into hotels, providing safe, emergency accommodation. This undoubtedly saved lives.’

The data, compared to average causes of death for homeless people for three month periods, showed Covid-19 would kill 16 people per quarter if it continued.

This was higher than the average 15.8 caused by suicide or the 13.2 ‘alcohol-specific deaths’. It was lower, however, than drug poisoning which causes 40.6.

In March as the country went into lockdown the Government urged local councils to take homeless people off the streets and into temporary accommodation to protect them.

As a result, thousands of people were put up in empty homes, B&Bs and hotels to prevent them catching and spreading the coronavirus.

Government officials announced in March that they would fast-track investment in building houses for homeless people.

The investment will be available in the next 12 months and will see £160million of a £433million four-year pot brought forward to be spent this year.

It aims to prevent those taken off the streets during the pandemic to return to homelessness once it is over.

Of the 6,000 planned ‘housing units’ due to be built using the money, 3,300 of those are due to become available in the next 12 months, according to the Ministry of Housing, Communities and Local Government (MHCLG).

The announcement came after MPs on the housing, communities and local government committee warned this week that a golden opportunity to end rough sleeping would be lost if the Government did not commit at least £100million per year to the cause.

More than 5,400 homeless people were offered safe accommodation in April to protect them during the outbreak, according to Government figures.

This number was said to be around 90 per cent of those living on the streets.

Rough sleepers in particular were at ‘disproportionate’ risk of the virus because they lacked basic hygiene facilities, such as the provisions to wash their hands, and were unable to self-isolate if they became ill or to stock up on food for long periods.

The ONS defines homeless people not only as those who live on the streets but anyone of ‘no fixed abode’ or living in a shelter.

Its data is preliminary and will likely be updated in future when more detailed analysis of deaths has been completed, the report said.

Some 90 per cent of homeless deaths have to be investigated by a coroner, the ONS said, which can delay the process of recording it by ‘several months’.

It added: ‘During the pandemic, some homeless people were sheltered in hotels and bed and breakfasts, as part of the respective policy initiatives of the UK government and Welsh Government.

‘For both England and Wales, the addresses of these establishments were included in the search method, in the same way as for known homeless shelters.

Homeless people are at a greater risk of serious illness because many of them already have health problems, according to Crisis – some 78 per cent of homeless people report physical health issues, compared to 37 per cent in general population.

And they are also less likely to access medical services, often using A&E as the first port of call if they have health issues, charities say.

Delaying or avoiding medical treatment makes people less able to recover from infections or long-standing illness, and may raise their risk of dying young.

Crisis’s Mr Sparkes added: ‘We must now build on this [support from councils].

‘We need emergency homelessness legislation to guarantee everyone experiencing homelessness has the security of a safe and settled home.

‘Without this, people risk being forced back on our streets or into crowded shelters, with the danger posed by the virus still very real.’