Skipper of speedboat that hit buoy killing girl, 15, and injuring ten others was doing one-handed high-speed stunts in the moments before, accident probe finds

The skipper of a speedboat that crashed into a buoy and killed a 15-year-old schoolgirl had been performing one-handed, high-speed stunts at the time, an accident report revealed today.

Emily Lewis from Park Gate, near Southampton, died from catastrophic chest injuries after the Rigid Inflatable Boat hit a five-tonne navigation buoy which the skipper had failed to see within the 10 seconds he had to spot it.

A Marine Accident Investigation Branch (MAIB) report released Thursday stated that ‘few safety practices’ were being followed by the boat’s operators as it performed rapid figure of eight turns and narrowly missed a series of buoys on the river Solent near Southampton Water.

Images showing the horrific moment the boat ploughed into the huge buoy, which was visible for 15ft above the water, were released for the first time today by the MAIB. 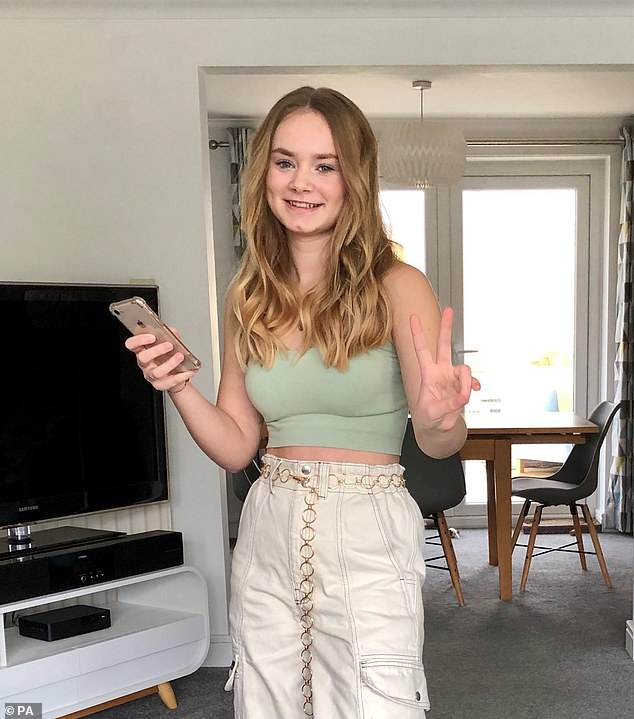 Emily Lewis from Park Gate, near Southampton, died from catastrophic chest injuries after a Rigid Inflatable Boat hit a heavy navigation buoy which the skipper had failed to see

The report said the vessel’s 11 passengers became ‘accustomed to passing close by large navigation buoys at high speed’ so were ‘unconcerned’ that the boat was heading directly towards the buoy it crashed into.

All passengers, apart from one, suffered injuries including broken limbs, fractured vertebrae, dislocations and a punctured lung. Two were thrown overboard from the Seadogz boat.

Emily, sitting on a middle bench seat, suffered a fatal and catastrophic chest injury following the tragedy in Southampton Water, Hampshire, at around 10am on August 22 last year, as families booked the excursion during the summer holidays.

The MAIB interim report today said the Seadogz skipper pulled a series of one-handed ‘high-speed manoeuvres’ including figure of eight turns up and down Southampton Water before the 38.4 knot (44.2mph) crash. 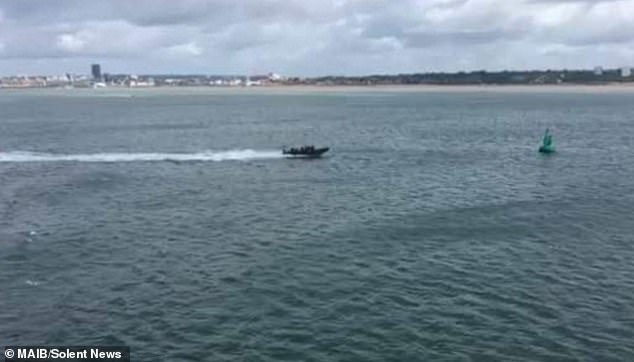 Images showing the horrific moment the boat ploughed into the huge buoy, which was visible for 15ft above the water, were released for the first time today by the MAIB 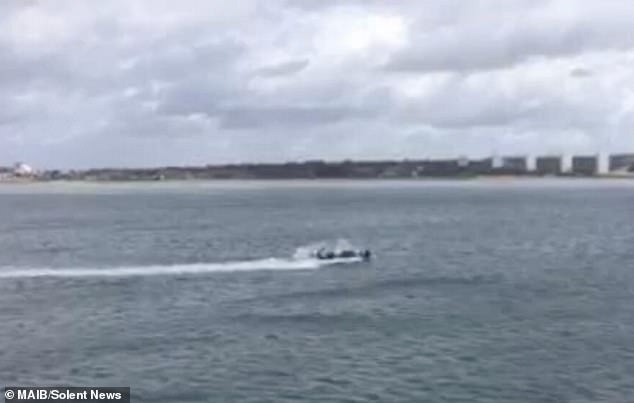 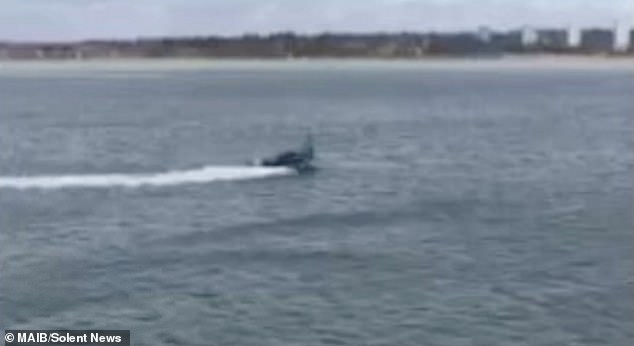 All passengers, apart from one, suffered injuries including broken limbs, fractured vertebrae, dislocations and a punctured lung 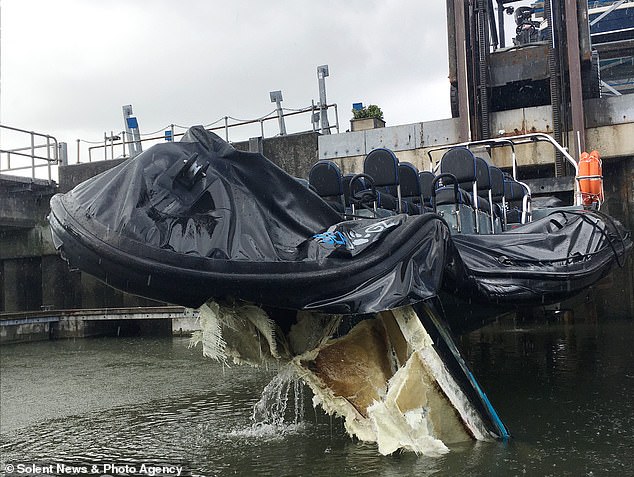 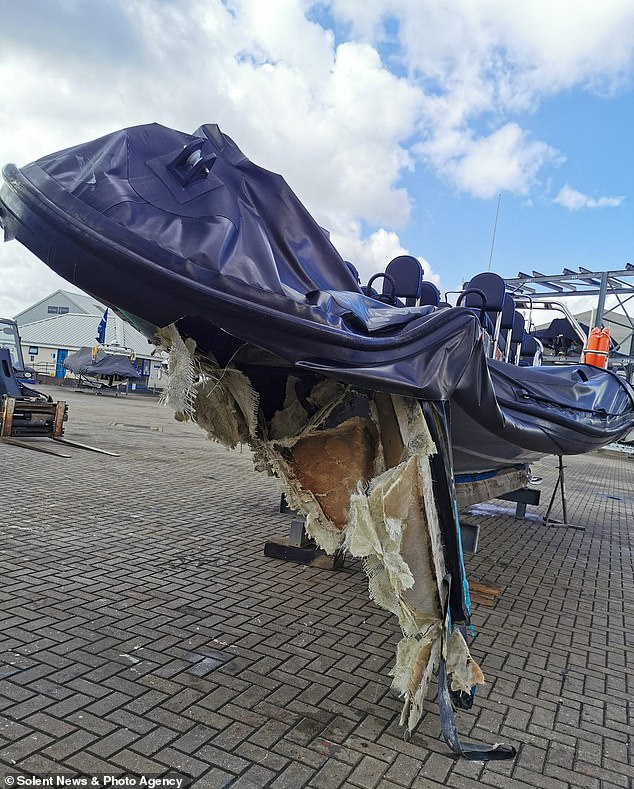 It said: ‘Seadogz collided with the North-West Netley buoy because the Rigid Inflatable Boat’s skipper was concentrating on conducting high speed manoeuvres in close proximity to another vessel and did not see the fixed navigational mark in time to take avoiding action.’

It added: ‘At 10:08am, Seadogz passed the car ferry Red Falcon, which was proceeding on a south-east course down Southampton Water.

‘This offered the skipper an opportunity to drive Seadogz across, and so to jump over the ferry’s wake.

‘As Seadogz passed astern of Red Falcon for the fifth time the Rigid Inflatable Boat (RIB) accelerated on a steady easterly heading for 10 seconds until, at 1011:09 and at a speed of 38.4kts (44.2mph), it collided with the North-West Netley starboard hand buoy.

‘The force of Seadogz’s head-on impact knocked the buoy over to an almost horizontal position and threw the RIB’s bow upwards. 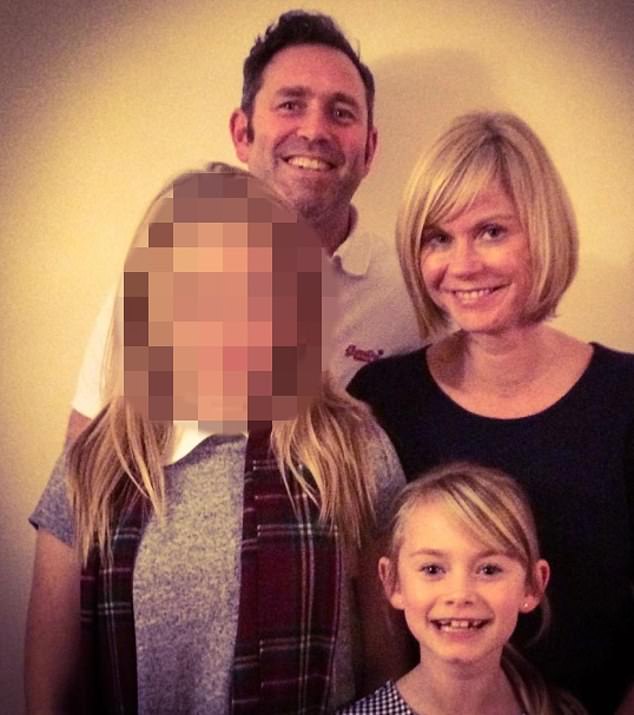 Emily’s family were on board the speedboat when it crashed, the teenager was conscious when she was taken ashore and later died in hospital of her injuries 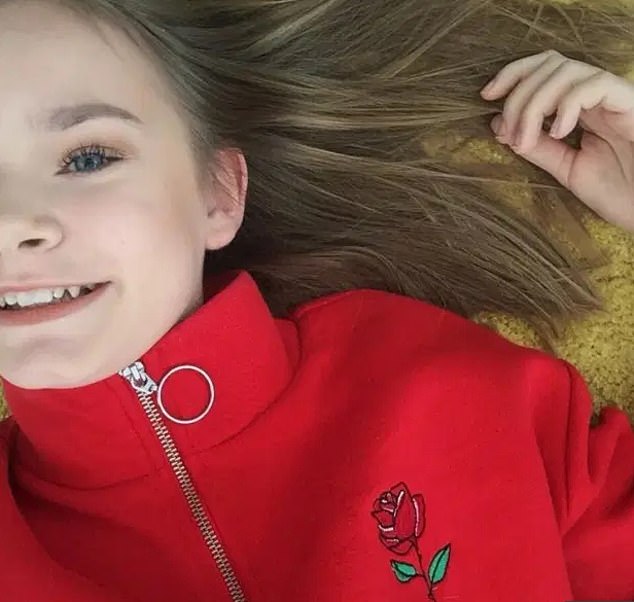 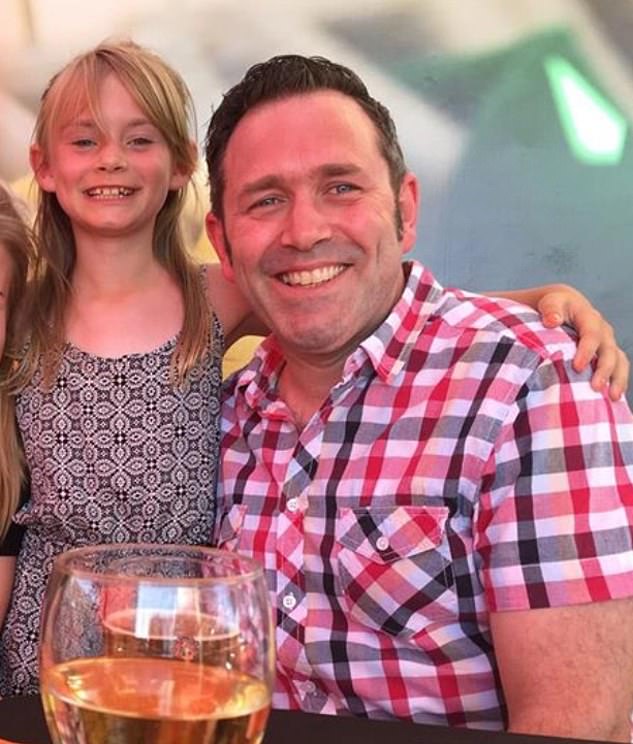 Sharing the tragic news on Facebook, Simon Lewis said: ‘I have pain but no breaks but the emotional pain far outweighs the physical’

‘The impact and abrupt deceleration forces caused all on board to be thrown violently forward from their seats.’

The report said the unnamed skipper was ‘a highly qualified and experienced RIB driver, he had local knowledge of Southampton Water and had worked for Seadogz Rib Charter Ltd on an ad-hoc basis for over 8 years’.

The five-tonne buoy was visible for 4.6 metres (15ft) above the waterline.

The report added: ‘The investigation so far has found, and it is of concern, that few of the safe working practices in the voluntary [Code of Practice] were being followed on the day of the accident.

‘Of particular note are: During the trip, the passengers became accustomed to passing close by large navigation buoys at high speed, so they were unconcerned that the RIB was heading directly towards North-West Netley buoy immediately prior to the collision and so did not attempt to alert the skipper.

‘High speed figure-of-eight turns increase the risk of the RIB hooking or spinning-out. 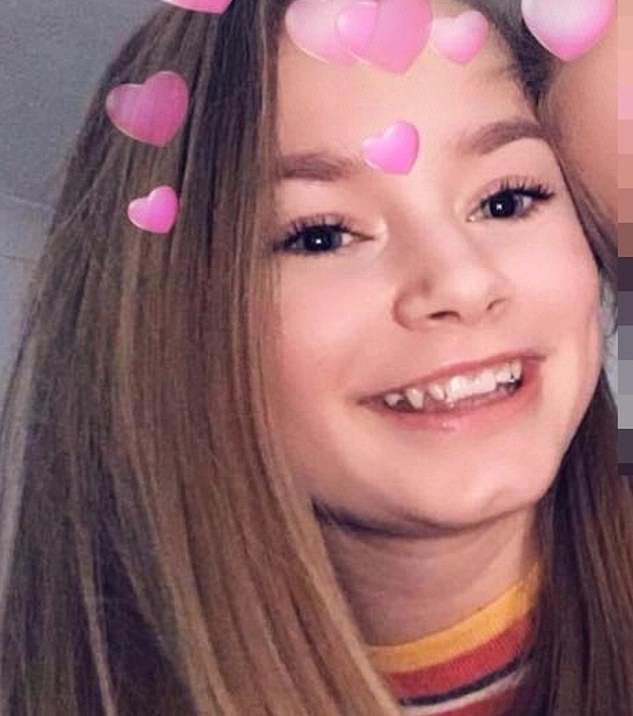 Emily, who had been conscious when she was taken ashore, later died in hospital of her injuries 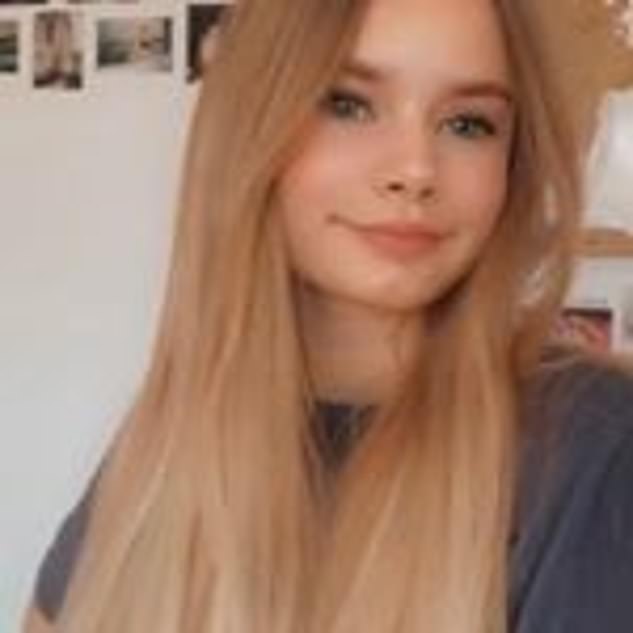 Emily Lewis, 15, died after a speedboat hit a buoy on the river Solent near Southampton Water

‘The skipper was operating single-handedly, at high speed and did not see the navigation buoy, which was directly ahead, for 10 seconds before impact.

‘Crossing the ferry’s wake at high speed increased both the risk of the passengers suffering spinal injuries and of the RIB coming close to a craft or object previously obscured from view by the ferry’s hull, leaving the skipper little time in which to react.

‘The execution of the Seadogz Experience Ride conducted on August 22, 2020, was not untypical of such operations.’

MAIB said it urges all commercial RIB operators to review their safety guidelines and said it will produce a full investigation report in the future. 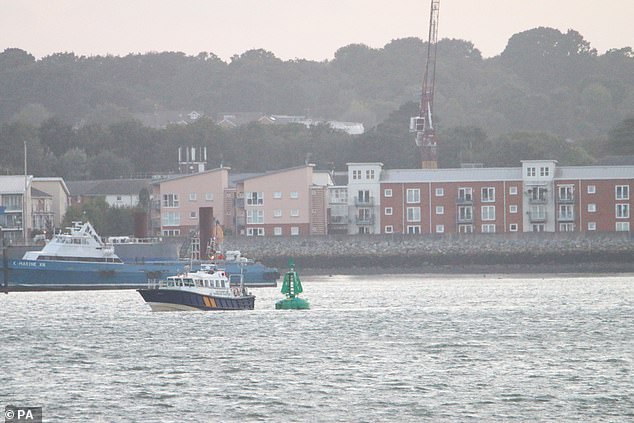 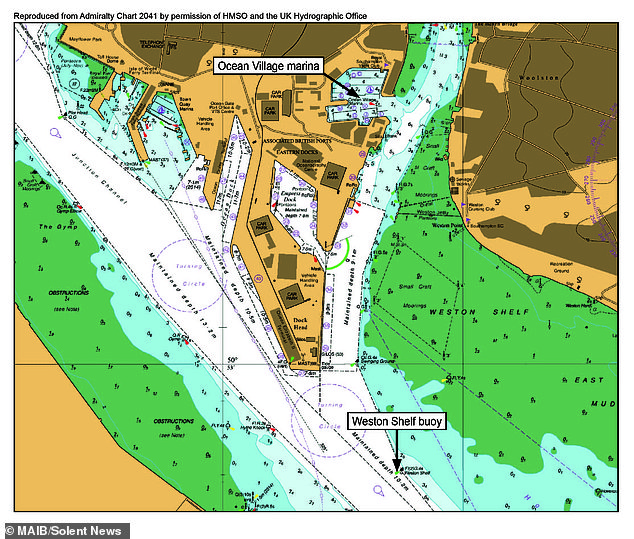 Andrew Moll, Chief Inspector of Marine Accidents said: ‘There are many aspects to this tragic accident, and the MAIB’s investigation is ongoing.

‘However, there are some immediate lessons that can be learned now that will help avoid a repetition this summer, which is why the MAIB is releasing an interim report.

‘What is concerning, is that few of the safe working practices in the voluntary CoP were being followed on the day of the accident.

‘These rides can provide excitement, entertainment and fun, and for this reason they are popular.

‘However, this dreadful accident saw nine people sustain very serious injuries and tragically cost the life of a young person.

‘As the holiday season approaches, I want to remind operators that they also have a duty of care for their passengers, and safety should not be compromised in pursuit of a thrill.’

Emily was on-board the Seadogz speedboat with her mother Nikki, father Simon and older sister Amy, 19, who all suffered injuries.

Emily tragically died at Southampton General Hospital later that day. An inquest into her death will be heard at Winchester Coroner’s Court, Hampshire.