Could Nicola Sturgeon try to BAN Boris Johnson from going to Scotland? SNP questions whether PM’s trip north of the border is ‘essential’

The SNP has accused Boris Johnson of showing ‘total disrespect and disregard’ to coronavirus travel restrictions ahead of the Prime Minister’s expected trip to Scotland this week.

The Prime Minister will reportedly head north of the border in the coming days to stress the benefits of the Union and to urge Scots to reject separatism.

But Mr Johnson’s political opponents have questioned whether the PM’s trip is within the spirit of lockdown rules.

Current curbs in Scotland dictate that people should not cross the border unless it is an essential journey. Travel for work is allowed ‘but only where that cannot be done from your home’.

All eyes are now on SNP leader and Scottish First Minister Nicola Sturgeon to see whether she will publicly rebuke the PM for making the trip. 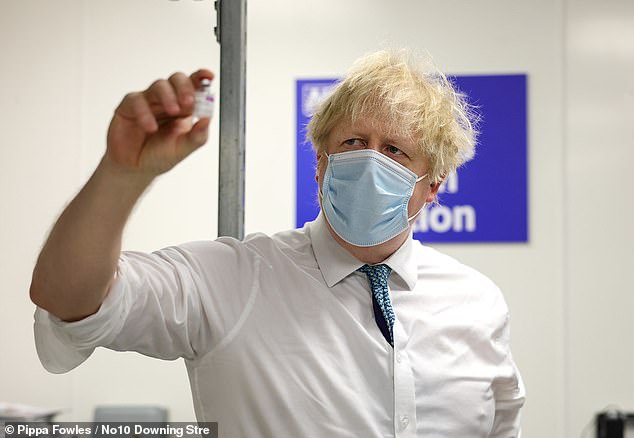 Boris Johnson, pictured at a vaccination centre in North London yesterday, is expected to visit Scotland later this week 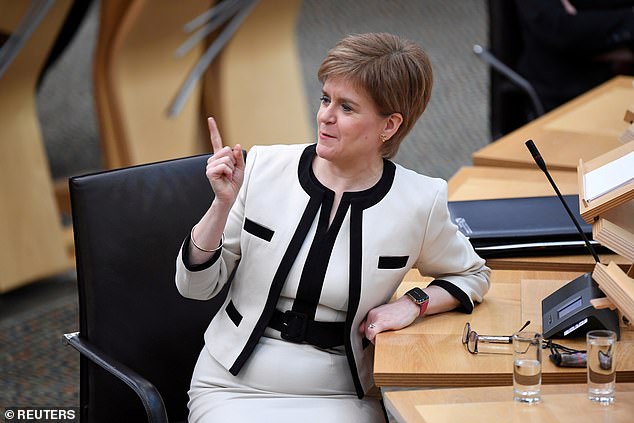 The situation is likely to prompt comparisons with last December when Ms Sturgeon appeared to take a swipe at Prince William and Kate Middleton over their whistle-stop tour to Scotland.

She said at the time that the Scottish government had reminded the Palace of the strict Covid restrictions north of the border ahead of the couple’s morale boosting trip.

The PM’s expected trip to Scotland comes after the SNP on Saturday released an 11-point ‘roadmap’ to holding an independence referendum.

The party has made clear a ballot could take place if May’s Holyrood elections result in a pro-independence majority – even if Westminster refuses to grant permission for a re-run of the 2014 referendum.

There have now been 20 consecutive polls suggesting a majority of Scots could vote in favour of independence.

Mr Johnson yesterday refused to say if he would mount a legal challenge to a second Scottish independence referendum, if Ms Sturgeon does press ahead with another ballot without the agreement of UK ministers.

Citing the response to the coronavirus crisis, the PM said he believed that people ‘can see everywhere in the UK the visible benefits of our wonderful union’.

The prospect of Mr Johnson going to Scotland this week has prompted SNP fury.

Christina McKelvie, Minister for Older People and Equalities in the Scottish Government, tweeted: ‘Eh? Is he campaigning during the pandemic? Should he be travelling? Is this essential work?’

SNP MP Neil Gray echoed a similar sentiment as he said: ‘Campaigning on the constitution during a pandemic you say? Total disrespect and disregard for “do not travel unless absolutely necessary”‘

John Nicolson, another SNP MP, said: ‘I thought only “essential” travel is allowed under the current lockdown.

‘How does this visit (welcome as his vastly unpopular trips always are) meet the current #Covid_19 criteria? Or don’t the rules apply to him?’

An SNP spokesman told The National newspaper: ‘The Prime Minister is always welcome to visit Scotland. The law in Scotland requires all work that can be done at home, to be done at home and Scottish ministers are not engaging in visits in line with the current Stay at Home regulations and the requirement to stay local.

‘So, it’s clear the PM must think the Union is really in peril if he considers his visit to be so essential.’