Home » World News » So who is REALLY to blame for this chaos? We answer the key questions

So who is REALLY to blame for this chaos? We answer the key questions

So who is REALLY to blame for this chaos? As airports turn into nightmare zones with hordes of travellers delayed, we answer the key questions

Huge queues of passengers snaking outside airport terminals, hundreds of flights cancelled or delayed for up to seven hours, and travellers reduced to tears. This is the reality of Britain’s half-term holiday hell… so how did we get here and whose fault is it?

Airlines and airports cut too many staff in pandemic

Several operators escape the blame when it comes to the chaotic scenes of recent days.

Jet2, Virgin Atlantic and Ryanair, for instance, have fared better – with fewer cancellations and issues at check-in desks and baggage areas than other airlines.

Some airports, such as Heathrow, London City and Stansted, have also generally coped with surging passenger numbers better than others.

But it is no coincidence that those operators struggling most appear to be the ones who cut staff most aggressively during the pandemic. 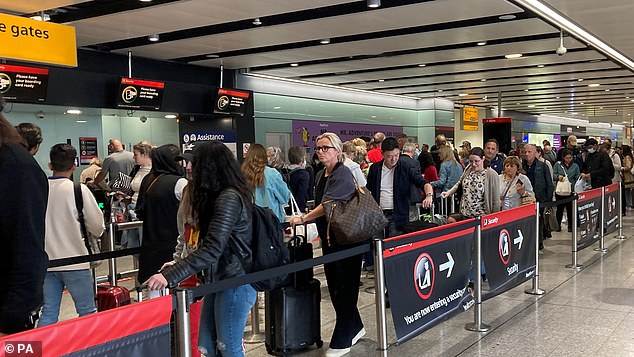 British Airways cut at least 10,000 roles, many of them experienced ‘legacy’ staff. It is partly why the flagship carrier announced this month it will axe 16,000 flights, or 8,000 round trips, from its schedule until autumn.

Budget airline easyJet, which has ripped seats out of aircraft so fewer cabin crew are required, is another which cut too heavily. Last week it said it is axing 200 flights over the half-term holiday. Manchester Airport, which also shed hundreds of roles, has been host to the most chaotic scenes of all.

Martin Chalk, head of the pilots’ union Balpa, summed it up neatly by saying: ‘Airlines have lost experienced staff [who] can often find the right ways to recover an operation. Once the dominos start to fall it has a knock-on effect.’

Legally, aviation firms must seek references from new recruits’ previous employers for the past five years. Until recently, they had to contact each employer manually, dragging out the process. In some cases, new recruits have had ten or more employers in that time, prolonging recruitment drives.

The industry claims government counter-terror checks, which must be carried out, have also been taking longer. During this time, many prospective new workers are said to be dropping out after finding work elsewhere.

Most airlines also like to spend at least a few weeks training cabin crew, although legally they can be deployed on planes after just a few days’ training.

Poor basic pay and terms and conditions being offered by operators has also been blamed for recruitment drives stalling.

Some are offering barely more than the minimum wage to baggage handlers, security staff and cabin crew.

Too many flights being scheduled

Some airlines scheduled too many flights after all Covid travel restrictions were dropped in March, having apparently gambled that they could recruit new staff quicker.

Hundreds of flights had to be cancelled at the last minute during the Easter holidays because some carriers didn’t have enough staff to operate them. 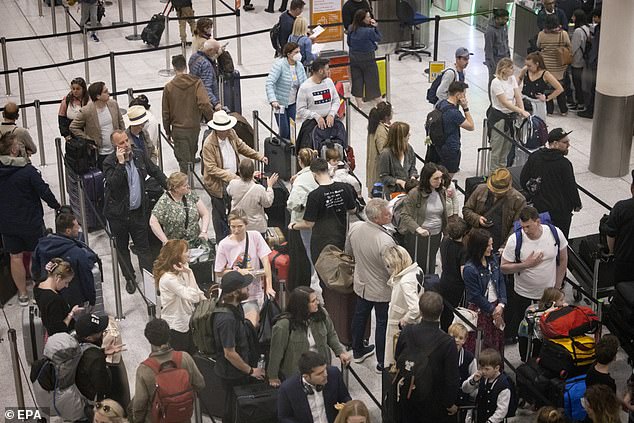 Hundreds more are now being pulled from schedules further in advance by BA, easyJet and TUI. It means they have effectively banked millions of pounds from travellers for trips they couldn’t honour.

But, despite a reduction in schedules, insiders say some airline and airport staff are still being pushed to the limit and stretched more than ever to ensure flights leave on time and huge queues are avoided. This is inevitably having a knock-on effect on quality of service and turn-around times as staff become exhausted.

One senior industry source said: ‘It would be unusual if operators were not pushing some staff harder than they’d like to be pushed.

‘But right now the boundaries are probably being pushed as much as they can within the law.’

Could Government be doing more?

The industry claims the Government must also shoulder some of the blame and should now be doing more to help. It says all Covid travel restrictions were only dropped in March and that left only a month or two to ramp up operations to meet the surge in demand.

It points to the fact that almost all restrictions were lifted towards the end of last year, only for them to be reimposed just before Christmas due to the discovery of the Omicron variant.

But in truth, the Government announced on January 24 that restrictions were to be dropped for the fully vaccinated – the vast majority of travellers.

Operators have therefore had five months to prepare for the peak summer season, which should be enough. Transport Secretary Grant Shapps has also changed the law to streamline the process for employment checks, allowing staff to be recruited quicker.

It means some operators have, in reality, mismanaged the situation and only have themselves to blame.

Disruption may last for months

Recruitment experts say disruption could last for up to a year due to the volatility of the aviation jobs market, meaning summer holidays also face severe disruption.

Kully Sandhu, boss of the Aviation Recruitment Network agency, which has 300 sector vacancies, says those who left the industry after being sacked during the pandemic have found other, more lucrative work or jobs with more sociable hours. It means the industry faces an uphill struggle to get staff back to pre-pandemic levels.

Mr Sandhu said: ‘In my opinion, it could be up to 12 months before we see staffing at airports back to pre-pandemic levels.

‘There is also now over-demand and under-supply, with everybody fighting for the same individuals to work in their business.

‘Other industries have also taken away a lot of the talent. It’s a whole catalogue of things.’

Before Brexit, jobs such as baggage handling were typically done by Europeans. But fewer are applying for such roles since Britain left the EU.

Operators may be forced to offer better wages and terms and conditions if they want to avoid a crisis this summer.

UK operators are not alone

Security waiting times at Amsterdam’s Schiphol Airport have become so long in recent weeks that airlines, among them Dutch carrier KLM, have halted bookings due to the risk of passengers missing flights.

Queues there have been much like those at British airports in recent weeks, snaking outside terminal doors, with waits of several hours to check in bags.

Fights have even broke out between passengers.

Hundreds of flights have been cancelled by airlines using the airport as a result.

Dick Benschop, chief executive officer of the Royal Schiphol Group, has pledged that the chaos ‘will be gone this summer’.

British travellers can only hope the same will happen here.