The state government has changed the Building Act to ban dangerous cladding on new multistorey properties, in the latest clampdown on shonky practices.

Planning Minister Richard Wynne announced a prohibition – effective from Monday – on the use of combustible materials, replacing previous looser guidelines, with non-compliant builders now risking fines of up to $400,000. 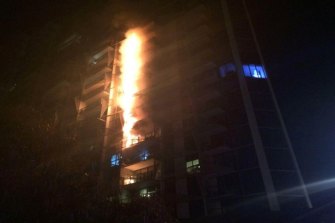 The 2014 blaze at the Lacrosse tower in Docklands.Credit:MFB

It prohibits their use on apartment buildings and other residential sites such as hotels and aged care facilities with two or more storeys. It also applies to office buildings, shopping centres or other retail premises, warehouses, factories and car parks with three or more storeys.

In March 2018 – following the 2017 Grenfell Tower fire that killed 72 people in London and a 2014 blaze at the Lacrosse building in Melbourne’s Docklands – Mr Wynne issued a ministerial directive that surveyors in Victoria could grant building permits only for multistorey projects using cladding products that were not on the banned list, which included aluminium composite panels with a polyethylene core of more than 30 per cent (equivalent to at least 70 per cent inert material) and expanded polystyrene panels.

A state government spokeswoman said on Sunday that those directives were not strong enough, being guidelines that applied only to municipal and private surveyors, which had only to show “regard” to them.

The spokeswoman said that from Monday “the Building Act has been changed to give the minister stronger powers to prohibit these products”.

Following further research, aluminium composite panels must now be composed of at least 93 per cent inert material, up from a minimum of 70 per cent.

Rebecca Casson, CEO of the Master Builders Association of Victoria, said: “This change provides greater certainty around what cladding products are deemed acceptable as at February 1, but it’s important to avoid any further changing of the goalposts, as that’s where the confusion for builders comes from. 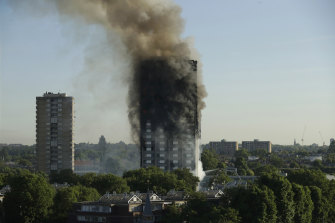 The deadly Grenfell Tower fire in London in 2017.Credit:

Opposition planning spokesman Tim Smith said Monday’s announcement “simply is a cynical re-announcement of a decision made by all state and territory building ministers at the Building Ministers’ Forum in February 2019”.

”There are still literally hundreds of dangerous buildings scattered throughout Melbourne whose cladding hasn’t been made safe.

“Instead of the Andrews government re-announcing a cladding ban on new buildings, why don’t they make existing buildings, that are clad in highly combustible material, safe?”

Mr Wynne said the specific materials were banned based on expert advice, “which found they can contribute to the spread of fire when used inappropriately or installed incorrectly”.

“This ban will ensure new developments are built to the highest standard to keep Victorians safe while we continue to rectify existing buildings through our world-first cladding rectification program,” he said.

The Building Act change was a recommendation in 2019 from the Victorian Cladding Taskforce that was co-chaired by former premier Ted Baillieu and former deputy premier John Thwaites.

More than 500 buildings were identified by the Victorian Building Authority as being at high risk of a cladding fire. The state government committed $600 million to rectify dangerous cladding on hundreds of high-risk buildings, of which the federal government refused a request to pay half.