THIS is the stomach-churning moment a two-headed snake named Tom and Jerry devours two mice at the same time.

The hungry serpent can be seen feasting on two mice simultaneously in a video that has gone viral. 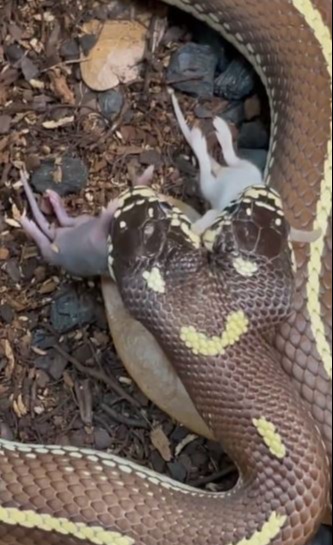 Reptile expert Brian Barczyk filmed the incredible moment and shared it with his over 600,000 Instagram followers, saying: "So my two-headed snake Ben and Jerry are both eating right now.

''They don't always eat at the same time actually, in this case, both of them are eating each side."

Followers were stunned by watching the brown and yellow snake having dinner with some wondering how both heads can eat simultaneously as the snake has only one digestive system.

Brian, who also works at "The Reptarium" in Michigan, said: "A friend produced them. It is a freak of nature and totally unexpected.

"It took me one-and-a-half years of begging before he sold them to me.

"We have about 10 one-of-a-kind animals [in the Reptarium] including Ben and Jerry, also a two headed turtle, and several one-of-a-kind albino and other colour mutations."

Two-headed snakes are rare but they have been observed in the wild a few times before.

The heads are known to fight each other over food as they don't realise that it's all going to the same digestive system.

Usually, one head is more developed than the other so makes more of the decisions.

Keeping a two-headed snake alive can be difficult if they won't cooperate. 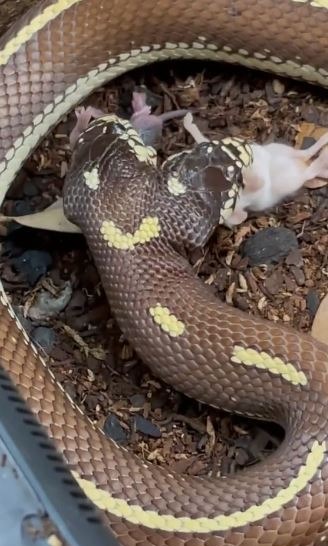 The condition of having more than one head is called polycephaly and occurs when an embryo begins to split into identical twins in the womb but then stops fully dividing.

In some cultures two-headed animals are considered a bad omen indicating a disaster is about to happen.

Luckily they are only produced in around one in 100,000 live births in the wild.

The Florida Fish and Wildlife Conservation Commission (FWC) shared images of another two-headed snake on its Facebook page last year.

''A rare two-headed southern black racer was recently found at a residence in Palm Harbor by Kay Rogers and family.

''Both head's tongue flick and react to movement, but not always in the same way.

''Two-headed snakes are unlikely to survive in the wild as the two brains make different decisions that inhibit the ability to feed or escape from predators,'' the post read.