An outspoken US nun who was recently embroiled in a censorship row with Melbourne’s Archbishop has warned Australia’s Catholic Church that it faces an inevitable decline unless it stops suppressing rank-and-file members pushing for reform.

The nation’s bishops are under pressure to overhaul the church after years of sex scandals and internal unrest, and one of America’s most prominent Benedictine nuns, Sister Joan Chittister, has now renewed calls for women to be ordained and for lay people to be given more power over their parishes, declaring that the church needs to “grow up” if it wants to thrive. 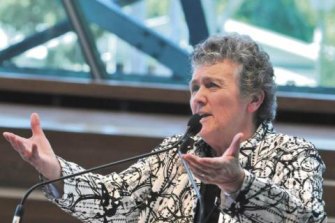 Such reforms were meant to be thrashed out at the most significant conference Australian Catholic bishops have held in 80 years, the Plenary Council, which is scheduled to take place in October.

However, working documents prepared for the event have prompted concerns that some of the more contentious issues on the agenda could be cast aside or not addressed properly by the bishops, despite past assurances that “everything is on the table”.

“Everyone knows that the Church in Australia needs a major overhaul of its governance, culture and structures, but instead of setting out a clear, concise and coherent blueprint for reform, this document is a ground plan for inertia,” said Catholics for Renewal president Peter Wilkinson. “It is very disappointing.”

Sister Chittister, who this month headlined an event by the Australasian Catholic Coalition for Church Reform, told The Age and The Sydney Morning Herald she shared concerns that “suppression by the bishops” would impede much-needed improvements. This, she warned, would prompt more members to abandon their parishes.

“There are one of two ways that this can end. The bishops can embrace the concerns and the need for resolution or they continue to ignore the laity – at which point the church will someday wake up in the morning and find out that the church is in fact gone.”

In a speech to a 3000-strong audience this month, Sister Chittister added: “Catholicism must grow up, beyond the parochial to the global, beyond one system and one tradition to a broader way of looking at life … Why not married priests, women priests, or women cardinals?”

Sister Chittister is a writer, feminist, and theologian who has spent 50 years advocating for social justice and church reform. However, the prominent US nun found herself at the centre of an Australian censorship saga two years ago, when she was disendorsed from speaking at a Catholic education conference soon after Melbourne Archbishop Peter Comensoli learnt of plans to include her.

The snub prompted a fierce backlash from rank-and-file Catholics, but the Archdiocese initially sought to dismiss the matter as a misunderstanding, saying the Archbishop had simply requested “that more names aligned to the themes of a national Catholic education conference be considered.”

Sister Chittister disagreed, describing the episode as an “insult” to the Catholic education system.

“Of course it was censorship; there wasn’t any doubt about that,” she said this week. “Nobody has a right to tell anybody else what to think. That is not helpful to any organisation – state or church. You’re only burning it down from the bottom up if you do that.”

Sister Chittister’s appearance in Australia comes at a critical moment for the church ahead of October’s Plenary Council. Expectations were high in the wake of the Royal Commission into Institutional Responses to Child Abuse, which found that the hierarchical nature of the church, coupled with its lack of governance, had created “a culture of deferential obedience” in which the protection of paedophile priests was left unchallenged.

However, rank-and-file Catholics have become increasingly concerned about the church’s will to change. Such fears were compounded in March when a working document prepared for the Plenary Council did not give enough credence to critical issues that members have been seeking to address.

Peter Johnstone, the head of the Australasian Catholic Coalition for Church Reform urged Australia’s bishops to use the Plenary Council to genuinely tackle the “existential crisis” the church faces.