Strongest typhoon of the year to hit Philippines, one million evacuated

MANILA: Nearly one million people have been evacuated in the Philippines before the world's strongest storm this year hits land.

Authorities will shut Manila's international airport to all flights for 24 hours from 10 am local time on Sunday as Super Typhoon Goni approaches, the Manila International Airport Authority said. 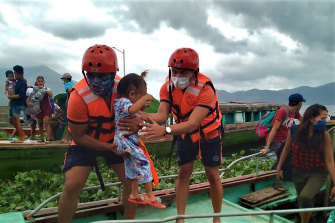 Preemptive evacuation" is underway, Ricardo Jalad, executive director of the Philippines' disaster risk-monitoring agency, said in a briefing on Saturday. Nearly 800,000 people have fled their homes in Albay province in the main Luzon island, while 200,000 more have been evacuated in nearby provinces, he said.

Super Typhoon Goni is expected to make landfall over Catanduanes early Sunday morning, and will cross the southern Luzon and Metro Manila area from afternoon through evening before exiting land Monday, the Philippine weather bureau said.

Categorized by the US Joint Typhoon Warning Centre as a super typhoon while at sea, it's now packing maximum sustained winds of 215 kilometres per hour.

In Naga City, east of Manila, Almira Miray Martinez and her family have put weights and tied rope around their galvanised metal roof. They covered their windows with material from rice sacks and tarpaulin to keep the rain out.

Their clothes are packed in a garbage bag, so they won't get wet. She, her husband and two sons, ages 17 and 20, are staying awake. They must make sure the drainage outside their house is not clogged by wood or debris, so as not to cause a flood.

"We could leave, but the reality of people like us – those who are hard up – is that the things we own are very hard to replace," Martinez said. "We could let go of material things like the TV, refrigerator, table – but we'll only leave [these] if we really have to."

A mere tropical storm on Wednesday, Goni erupted into 2020's most powerful cyclone on the planet by Friday. On Saturday morning local time, its winds peaked at 297km/h, the globe's strongest storm since Hurricane Dorian in 2019, which devastated the northwest Bahamas. It was the most intense storm in the western Pacific since Typhoon Meranti in 2016.

The storm gained strength over waters around 30 to 31 Celsius, about 1 to 1.5 Celsius warmer than usual. Such rapid intensification is made more likely by human-caused climate change, which has raised ocean temperatures globally.

The cyclone comes days after Typhoon Molave lashed the Southeast Asian nation, leaving at least 22 dead before heading to Vietnam. Goni is tracking a similar route.

An average of 20 cyclones pass through disaster-prone Philippines every year, and will likely complicate the nation's fight against the coronavirus as hundreds of thousands of people are evacuated from typhoon-hit areas.

Nearly three dozen areas, including Metro Manila, were placed on storm alert. Catanduanes and the eastern portion of Camarines Sur are under the second-highest storm alert, with winds of 171 km/h to 220 km/h expected in the next 12 hours. Under this typhoon signal, very heavy damage to high-risk structures and considerable damage to structures of light materials are expected.

Coconut, rice and corn plantations may suffer severe losses. Typhoon Goni could damage more than 928,000 hectares of land planted with rice and 58,431 hectares of corn, the Department of Agriculture estimates.

The storm can have a "high humanitarian impact," the Global Disaster Alert and Coordination System said on its website, adding that nearly 50 million people are at risk.

Another typhoon, Atsani, is forecast to enter Philippine territory on Sunday but is less likely to bring severe weather over the next three days, according to the nation's weather forecaster.