Student makes canoe from fungus which grows mushrooms when it's used

Has it got mush-room? Student fashions a canoe out of fungus which grows each time she takes it out on the water

A Nebraska student has grown her own canoe using fungus – and it sprouts new mushrooms every time she takes it out on the water.

The roots are usually found beneath soil and known for their dense, buoyant and waterproof properties, The Times reported.

Ayers, who is a student at Central Community College in Columbus, named the boat ‘Myconoe’. Because the boat is alive it means it grows new mushrooms each time it’s used. 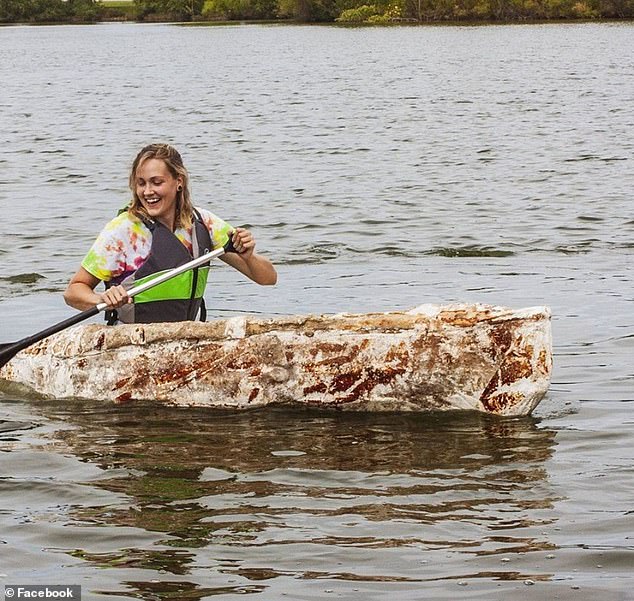 She came up with the idea after researching ways mushrooms could be used and  created the canoe while working as an intern at Nebraska Mushroom, along with the business owner Ash Gordon.

He offered her a summer internship so she could learn the ins and outs of fungi while they worked on the boat.

They suspended a wooden skeleton and pâpier-maché mould inside a hammock-like structure before filling it with mushroom spawn.

It was next hung in a special growing room where temperatures hovered between 80 and 90 degrees and the humidity ranged between 90 and 100 per cent, to create optimum growing conditions.

The mushroom canoe took just 14 days to grow before it was dried in the Nebraska sun. Ms Ayers has since taken it for three test voyages and plans to canoe down the Platte River next month. She says it can hold up to two people.

Ayers, who is part of a growing movement of mushroom advocates, told NBC News: ‘Mushrooms are here to help us — they’re a gift.

‘There’s so much we can do with them beyond just food. They’re our biggest ally for helping the environment.

‘I always have very big ideas. So I see something and it’s small and I just want to make it bigger and better. Since I’m from Nebraska, I love to fish. I’ve always wanted a boat. Why not just grow it?’

Ms Ayers said her mushroom fixation began after she stumbled across a 2013 documentary called Super Fungi, which she said made her appreciate the vegetable’s innovative uses.

The mushroom advocate said they can be used for household insulation, furniture, packaging, and even recycling plastics.

The successful ‘mushroom’ canoe has since inspired Ayers and Gordon to experiment making chairs, landscaping bricks and other items.

Gordon, 39, said: ‘It’s not just a piece of art, this is a functioning boat that works.

‘It really helps bridge that gap between people who didn’t have an interest in mushrooms — maybe they don’t like to eat mushrooms and really haven’t thought about other potential uses for them. The boat gave them something to look at and think about.’

Ayers is part of the of Growing Pathways to STEM program and is now leading one of the cohort’s main research projects building bee hotels, small structures called nests or homes, from mycelium.