Home » World News » ‘Summer’s going to be great’: Aussie cafes brew hope in a cup as England comes out of lockdown

‘Summer’s going to be great’: Aussie cafes brew hope in a cup as England comes out of lockdown

London: When the time came for Cloe de la Vega to reopen the doors of her 50sqm cafe – Abuelo – in the heart of Covent Garden, her staff were more disbelieving than excited, after so many false starts out of lockdown.

“No-one believed it,” she said.

The scepticism is warranted. Londoners have had a hard year. Every time the country has attempted to reopen, their hopes have been dashed as they’ve been ordered indoors once more. 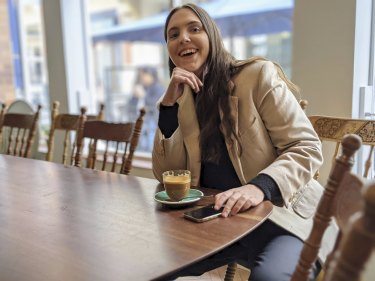 “The Christmas situation was an absolute joke,” says De La Vega, recalling how she had to bin £1500 ($2672) worth of coffee beans after UK Prime Minister Boris Johnson ordered a lockdown that would last until April.

Abuelo opened in 2017, the first London offering from De la Vega and her mother Lynette, an architect who ran four restaurants in Sydney and Melbourne.

“It’s been really busy from the get go,” De La Vega says. “We put a sign up outside saying ‘Aussie coffee’ and that brought a lot of Australians and New Zealanders in.”

“Normally you will always hear an Australian accent in here,” Lynette adds.

With the city a ghost town and the cafe limited to take-aways, staff had nothing to do when they did try to trade during the second lockdown. Sales fell to 10 per cent of their normal levels.

“It was demoralising, they were standing there doing nothing,” De La Vega says. Eventually they closed their doors just as they had during the first lockdown. 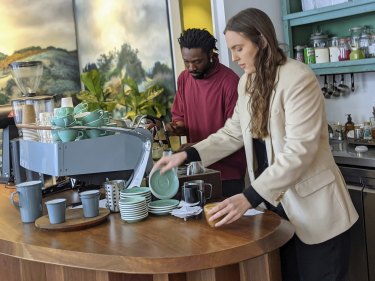 But after almost five months of forced hibernation, the success of the United Kingdom’s rollout – roughly half the population has had at least one dose since December – has allowed the country to emerge from restrictions, booking haircuts, entering shops and eating outdoors.

Since reopening on Monday, De La Vega says she is now optimistic about Britain’s year ahead.

“Seeing people now, it just makes me feel so happy,” she says. “The summer’s going to be great, I can feel it.”

“If you’d spoken to us a few months ago we might have been more negative but now we’re starting to feel that energy.”

Westminster Council has agreed to pedestrianise huge portions of central London to allow for more outdoor seating, with hospitality limited to outdoor table service until the next stage of unlocking on May 17.

“Next month we can be open inside and out and that will mean we will have twice as many seats as we’ve ever had and we’ll actually be better off,” De La Vega says.

Across town on Liverpool Street in the Square Mile, Huw Wardrope says sales at his Urban Baristas coffee shop have increased from around 10 per cent of pre-pandemic levels to around 30 per cent.

“I guess in the back of my mind there is always that worry that it’s going to take longer or that there’s going to be another outbreak or lockdown but overall I’m pretty positive and keen to crack on and get things open again and see people come back to life,” he says.

“And I think they will. Things will come back, I don’t think it will be 100 per cent in city locations but we’ve got neighbourhood locations and I think you’ll see an uplift there.”

He says he lost at least £100,000 ($178,000) when the first “shock” shutdown was ordered in March last year; he has used the time to diversify – roasting his own beans and launching an online coffee subscription service.

“The pandemic really just forced us, quickened the process and gave us that extra nudge to diversify.”

The 40-year-old, originally from Bathurst in Central West NSW, used to work in the city in finance, before enacting his dream of bringing Australian-style coffee to the city where’s he’s lived for 16 years.

In 2016 he and his business partner Jono Bowman opened their first kiosk at Bounds Green tube station.

“It was a huge success, I was getting comments like ‘you’ve increased our house prices by bringing hipster coffee,’” he says.

A year later he expanded and now has six outlets across London. Just one outlet remains closed – at St Katherine’s Dock in Wapping where he lives.

In the surest sign of his confidence in London’s ability to bounce back, he is close to signing off on another outlet.

“We just want to serve everyone great Aussie-style coffee and bring a little happiness to everyone’s day and during the pandemic when everything was closed, the highlight of some people’s day was grabbing a take away coffee and having a socially-distanced chat to someone.

“That’s really something I’m proud of – that we’ve helped people and give a little bit of life during some very difficult, unprecedented times.”