The death of a child at the hands of the person they love more than anyone is an incomprehensible tragedy, but research increasingly points to perpetrators seeking help ahead of the event and falling through the cracks.

After a suspected murder-suicide which left a Melbourne mother and three young children dead this week, experts in the field have warned of a lack of support for those at risk of such a crime and a misguided 'optimism' among their family and friends that such a thing could never happen. 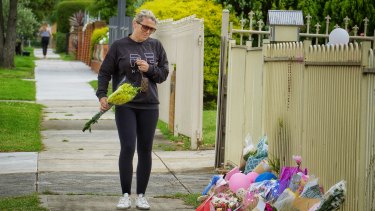 A woman drops flowers while in tears in front of the house where the bodies of the three children and their mother were found.Credit:Luis Ascui

The distressing deaths come after it was revealed last year Victorian women were seeking mental health support at record levels as the coronavirus pandemic increased stress, anxiety and depression among those bearing the brunt of caring responsibilities.

The bodies of 42-year-old Katie Perinovic and her children Claire, 7, Anna, 5, and Matthew, 3, were discovered inside their Burgess Street home in Tullamarine on Thursday afternoon.

Preliminary police investigations have found that the deaths were a suspected murder-suicide. Police believe Ms Perinovic was responsible for the deaths of her three children.

Professor Thea Brown of Monash University has extensively studied cases of filicide, where a parent kills their child, and said the most profound challenge was the stark lack of support and understanding of the complexity of the phenomena in the lead-up to the tragic event.

"Very few people know much about filicide and we have found it very difficult to get our knowledge out into the community," she said.

"Often there's a kind of mental illness, particularly a serious depression, which is not easily recognised as being dangerous so you need people who are knowledgeable and qualified to do a good assessment and to understand that they've got to then address the person and their problems. Keeping up a regular support of those people is critical."

Professor Brown led a study for the Australian Institute of Criminology examining almost 240 incidents of filicide involving the deaths of 284 children between 2001 and 2012.

Researchers found that filicide was “a regular occurrence in Australia, not a rare one,” with almost one child a fortnight killed by a parent or step-parent.

“There’s a sense of taboo around it," she said. "That it’s too hard and too confronting to deal with."

Professor Brown said the difficultly was that very few outreach services were prepared for such patients.

"Most perpetrators are found to have spoken to either health services or to family members or friends beforehand, but people don't really understand what they're saying, because they just don't expect an event like this to happen," she said.

"The problem that you've got is that people don't think that this could happen so they don't look below the surface, they retain an optimism that nothing's going to happen. But that's just not well-founded."

"It's really the existence of several stresses at once. It's not just one," she said. "We don't know at this point, which of those factors were present in this case, but she was obviously in great distress and despair."

There are higher rates of filicide in outer suburban areas, where parents don't have the same outreach support as inner-city areas, and such crimes are often fuelled by social isolation, Professor Brown said.

"The best prevention is access to support services and being able to get to them nearby and secure appointments quickly," she said.

"They also need special care and professionals who have expertise and can recognise what is happening and engage with them because sometimes these people are difficult to engage with and there seems to be difficulty over the years for services to really understand what those people are saying to them. They need a service that is willing to carry them and support them for quite a long time." 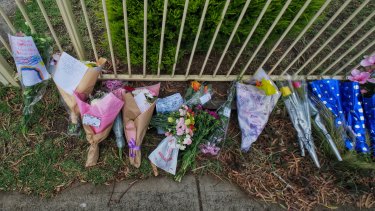 Flowers and cards in front of the Tullamarine house where  42-year-old Katie Perinovic, and her three children – Claire, 7, Anna,5, and Matthew, 3, were found dead.Credit:Luis Ascui

Anxiety, depression and eating disorders had all soared during the pandemic, she said.

The clinic was also treating a growing number of patients with self-harm injuries and an increasing cohort of women who had not experienced mental health issues before the COVID-19 pandemic.

"For this particular case [in Tullamarine] it's important to remember that we don't know what happened yet," she said.

"But what we are seeing is that the residual aspect of the pandemic… the residual fear of another isolation or lockdown is really prompting mental health concerns in the community."

The psychological consequences of social isolation, the stress of home schooling on top of other duties such as caring for elderly relatives, and the economic stress of the pandemic were all contributing factors, Professor Kulkarni said.

The professor of psychiatry at Monash University said it was not uncommon for people to begin displaying symptoms of post-traumatic stress disorder after a crisis has settled. 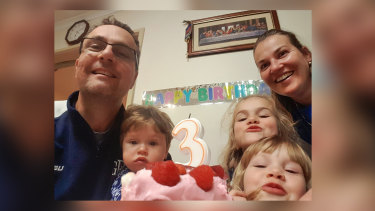 Tomislav Perinovic, 48, and his wife Katie, 42. Ms Perinovic and their three children aged 3, 5, and 7 were found dead in their Tullamarine home. Credit:Facebook

Father and husband Tomislav Perinovic, who found his children and wife deceased inside the family home, was released without charge on Thursday night. Police stressed there had been no history of family violence reported.

"Homicide squad investigators have formed the preliminary view that the 42-year-old woman is responsible for all four deaths and on completion of their investigation, a report will be provided for consideration of the coroner," police said in a statement on Friday.

“This has been an incredibly heart-wrenching experience for all concerned," Acting Deputy Commissioner Robert Hill said.

"There is this whole sense of lives that were never fulfilled," she said.