Home » World News » Teachers in the trenches: Getting dirty with Ukraine’s civilian soldiers

Teachers in the trenches: Getting dirty with Ukraine’s civilian soldiers

By Anthony Galloway and Kate Geraghty 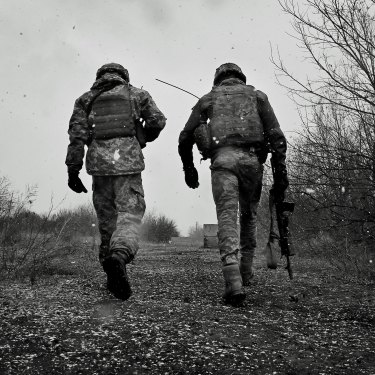 Soldiers with the 30th Brigade on the front line in the Donbas region in eastern Ukraine.Credit:Kate Geraghty

A young unit commander pokes his rifle out of a hole in an old farmhouse in eastern Ukraine, trying to observe movements from the enemy just a few hundred metres away.

We have reached the timber house – the very front of the front line of Ukraine’s war with Russia and Moscow-backed separatists – via a 150-metre-long trench just as a snow storm intensifies. A phone line runs along the trench, allowing soldiers at a distant observation point to report what they’re seeing to their comrades on the frontline.

It’s a World War I movie playing out in the 21st Century.

A Ukrainian soldier with the 30th Brigade stands in the trenches on the front line in the Donbas region.Credit:Kate Geraghty

Yesterday, the unit spotted some movement from the separatists of the self-declared Donetsk People’s Republic, so they fired a pre-emptive mortar strike across the forested no-man’s land, killing some of their enemies.

Minutes after leaving the frontline, a mortar is fired in our direction by either separatists or Russians. We can’t tell. Nor do we stick around to find out. It is too dangerous to linger. 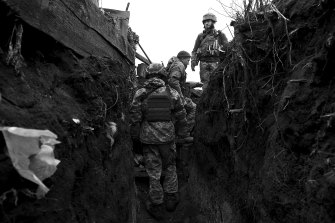 Ukraine’s 30th Brigade in the trench at an observation post on the battleground in Donbas.Credit:Kate Geraghty

This stretch of woodland is just one battlefront in an eight-year war between Ukraine and the separatists, but it is also a key position the soldiers know they must hold if their country is to fend off the Russian invasion. With Ukraine’s army now stretched far and wide, units in the Donbas region are face unprecedented firepower from the separatists and the Russians. But so far, they are holding their positions. 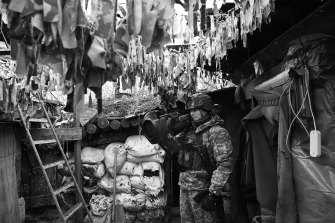 While Ukraine’s plea for a no-fly zone over its country have dominated the headlines, its forces on the ground have made good use of nimble, portable, high-tech weaponry to exploit weaknesses in Russian defences.

The unit we are embedded with is part of the 30th Prince Konstanty Ostrogski Mechanised Brigade, which has fought many battles during the eight-year Donbas war. In the new war of recent weeks, it has been instrumental in taking out Russian tanks. 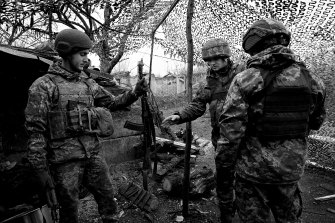 Soldiers in Ukraine’s 30th Brigade discuss their weaponry in a trench in the Donbas region.Credit:Kate Geraghty

Prince Konstanty Ostrogski, whose name was bestowed on the battalion, was a 15th century Ruthenian noble who led successful campaigns against the Grand Duchy of Moscow and saw off the Crimean Tatars at the Battle of Wisniowiec in 1512.

The unit’s 23-year-old commander, Maksym, says he and his soldiers are still inspired by their patron. 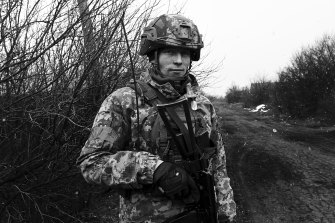 Commander Maksym says the fighting in Donbas, where war has been waged for the past eight years, has changed markedly since the Russian invasion of Ukraine last month.Credit:Kate Geraghty

“History is repeating,” he says. “It inspires, not only me, but also my unit and our brigade.”

Maksym says the eastern front has changed markedly since Russia invaded on February 24. The intensity of the shelling and mortar strikes has increased, drones now skim above the trees searching for them and trying to take them out.

“The enemy is more often using artillery and high-calibre machine guns. They are shelling during most of the day with just a two or three-hour break,” he says.

“They are shelling the front-line positions and also the positions to our back, and the shelling is often quite chaotic.”

Maksym insists his unit is holding its position, and even suggests it could move on the separatists if ordered to do so. 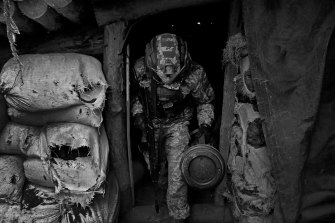 Maksym in the trenches on the Donbas front line.Credit:Kate Geraghty

“We are ready to stay until the end and are ready to go and attack our enemies, but we are only waiting for the order of our high commander,” he says.

The young commander, who has friends from the military academy fighting near the country’s two biggest cities, Kyiv and Kharkiv, says he believes his comrades will continue to resist the Russian onslaught across the country.

“We believe in them,” he says. “We are supporting our friends on other fronts in Ukraine and are ready to avenge for every killed Ukrainian soldier.”

English teacher Vyacheslav, 49, has only been on the front line for two weeks.
From a small town in the Zhytomyr region, in Ukraine’s north-west, Vyacheslav says he felt compelled to take up arms when the Russians invaded. While he served for a year in the Donbas in 2015, this is his first experience on the front line.

His wife, his two children and all of his students understand his decision, he says. 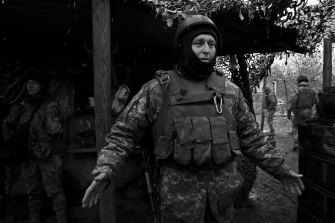 English teacher Vyacheslav, 49, has left the classroom and his family in north-western Ukraine to fight with the 30th Brigade on the front line in the Donbas region.Credit:Kate Geraghty

“Of course they are very scared about me – my children, my wife, my parents – they worry about me,” the secondary school teacher says.

“If my wife didn’t understand me, there would be no agreement, no love. We have to defend our motherland. We have to have freedom and peace. This is my duty.”

Vyacheslav says he doesn’t understand Russian President Vladimir Putin’s rationale for invading Ukraine – that he needs to “denazify” the country.

Vyacheslav says his job on the front line is to watch the position of the enemy for any sign of movement by tanks or other vehicles.

“Sometimes they try to shoot us, bomb us, and then we try to hide … and run fast,” he says. 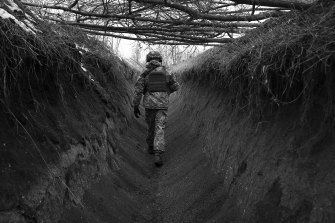 Maksym walks along a trench towards an observation post.Credit:Kate Geraghty

“It’s tough on the front line, but I have good friends. They teach me. My job is a peaceful teacher, and they have been serving for a long time. They know more about military matters.”

He hopes someday the war will end. But he knows Ukraine will then face the difficult task of rebuilding from the rubble of bombed-out cities.

“We are very united by the idea of Ukraine, and that is nice, it’s very pleasant,” he says. “But after the war, we have to get on with our lives.”