Tesco launches recruitment drive for Christmas with 11,000 temporary jobs available in stores and warehouse across UK

Tesco has announced it will hire more than 11,000 people on a temporary basis over the Christmas period to work in its stores and warehouses across the UK.

The supermarket giant says it will be hiring across the UK, with jobs including picking for online deliveries and store replenishment, supporting permanent colleagues.

It comes as the coronavirus pandemic cost up to 200,000 jobs across Britian. 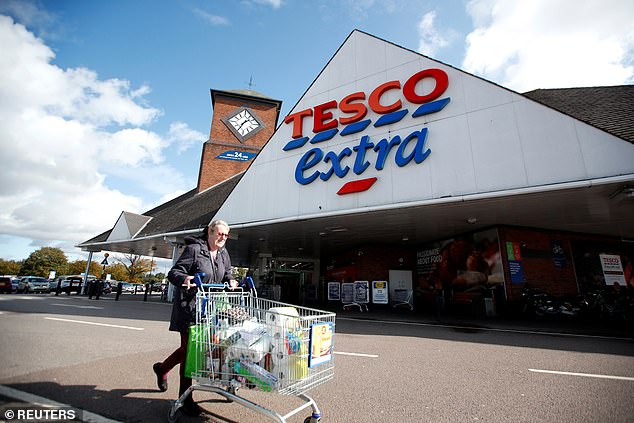 Tesco has announced it will hire more than 11,000 temporary staff to cover the busy seasonal period. File photo

While 11,000 shops closed between January and August, supermarkets have experienced a busy year, brought about by panic buying and an increase in online delivery demand.

Around 47,000 temporary staff joined Tesco at its peak during the pandemic, although it is understood that most of these roles have since ended.

The supermarket said it had more than doubled its online capacity since the outbreak, and in August it announced it was creating 16,000 permanent jobs.

Most of those permanent jobs were expected to go to temporary staff who joined when the impact of the virus hit British jobs and businesses.

The supermarket says it has served nearly 1.5 million customers every week, while boasting a 26 per cent share of Britain’s retail market.

Announcing the Christmas recruitment drive, Tesco’s people director Rachel Bushby said: ‘We had a fantastic response for temporary jobs during the spring lockdown and we’d love to hear back from anyone who worked here then.

‘We’re looking for people who enjoy working as part of a team and are prepared to go that extra mile in order to help our customers.’

Once the seasonal period comes to an end, Christmas colleagues will be encouraged to apply for any permanent roles available in their stores.