The last hurrah? Britain takes to the streets in 10th weekly salute to NHS key workers – as the event’s founder says this should be the final one

Britons have taken to the streets for the 10th weekly NHS Clap for Carers this evening, after the event’s founder said it should be the last one.

People all over the country have been taking to their doorsteps, balconies and windows to cheer and applaud NHS staff and key workers over the past ten weeks, amid the fight against coronavirus.

Prime Minister Boris Johnson, his cabinet, celebrities and even royals have been getting involved as the nation pays tribute to key staff helping to keep the country going during the pandemic.

And the PM led the applause this evening, standing outside Number 10 and clapping enthusiastically on the day he announced the easing of Britain’s coronavirus lockdown.

Annemarie Plas, the founder of the initiative, was also pictured enthusiastically marking the occasion, after saying that tonight’s event should be the last.

She called on Britons to concentrate on other ways to support the NHS and told Good Morning Britain that it’s time to move on. 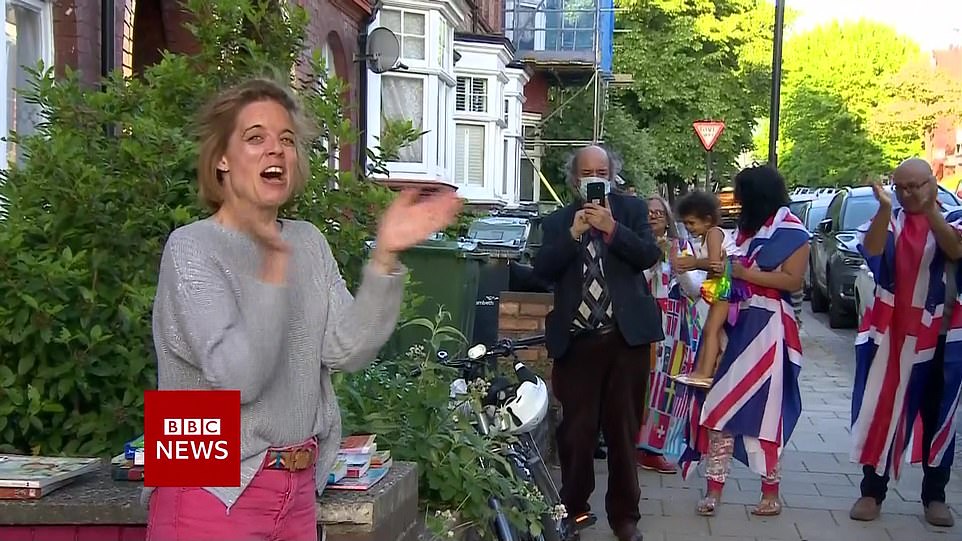 Annemarie Plas, the founder of the Clap for Carers event, joins members of the public enthusiastically taking part in tonight’s applause, which is the tenth weekly and may be the last one 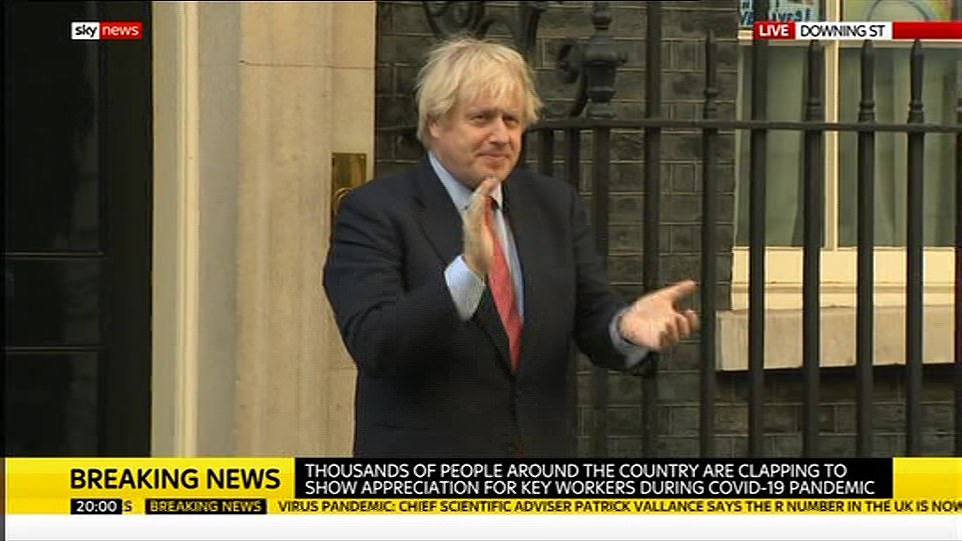 Prime Minister Boris Johnson led the Clap for Carers applause this evening, on the day that he announced the easing of Britain’s lockdown 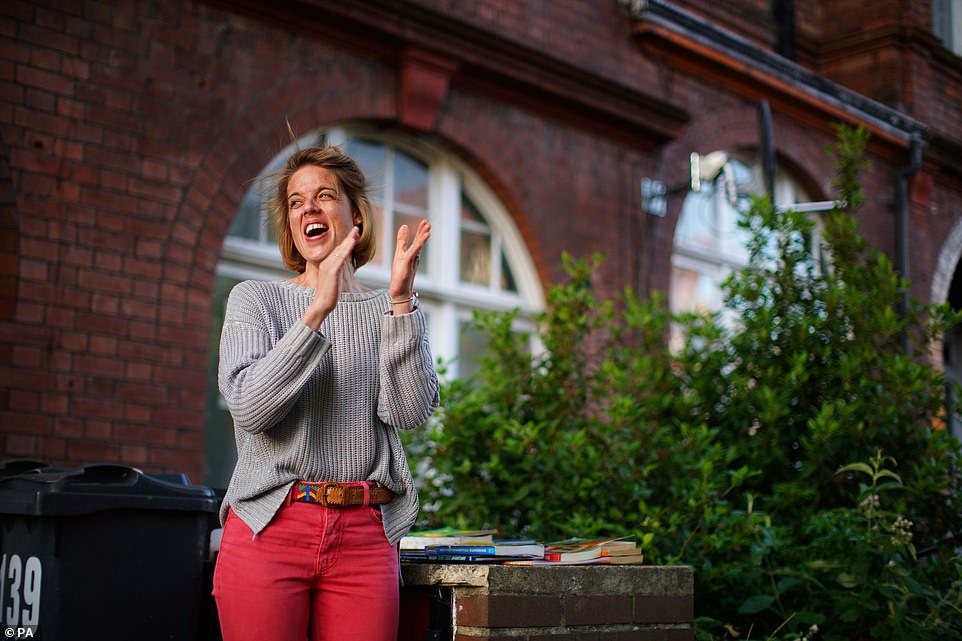 Annemarie Plas, 36, a Dutch national living in south London who created the weekly 8pm Clap For Our Carers, stands with other residents in south London, as she joins the applause. She has called on this week to be the last one 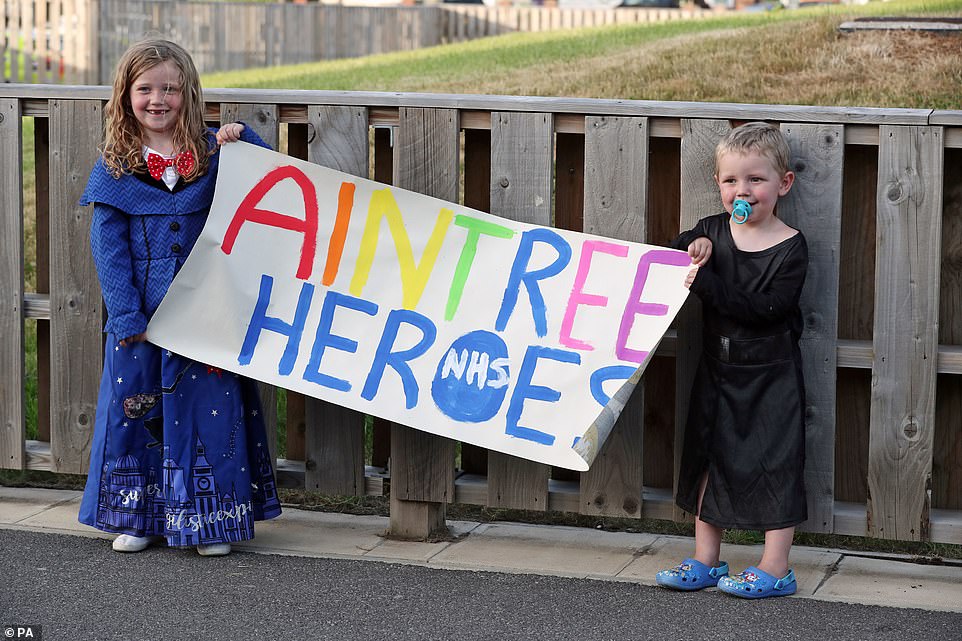 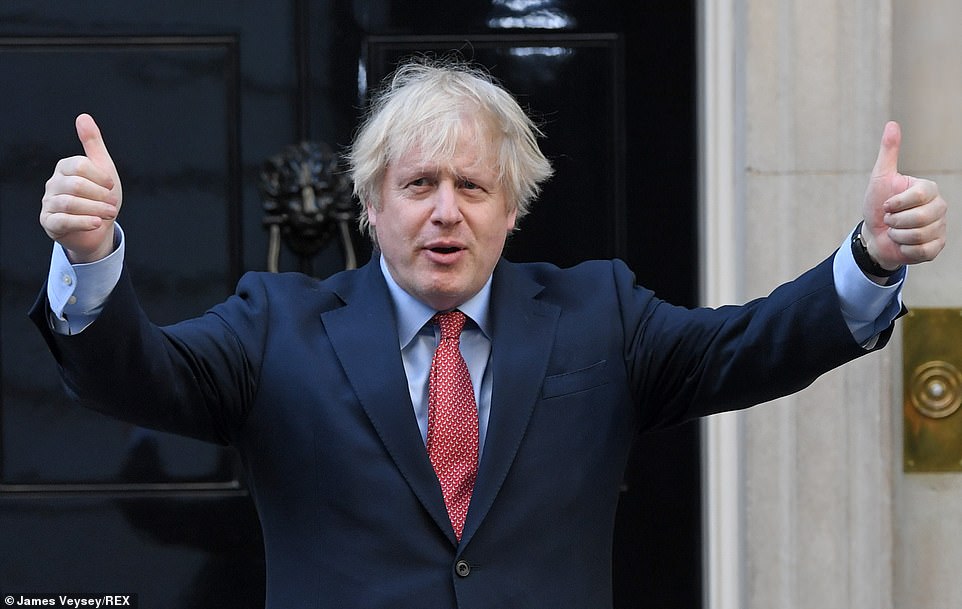 The Prime Minister put on another animated display during tonight’s clap, giving a thumbs-up to the camera after applauding 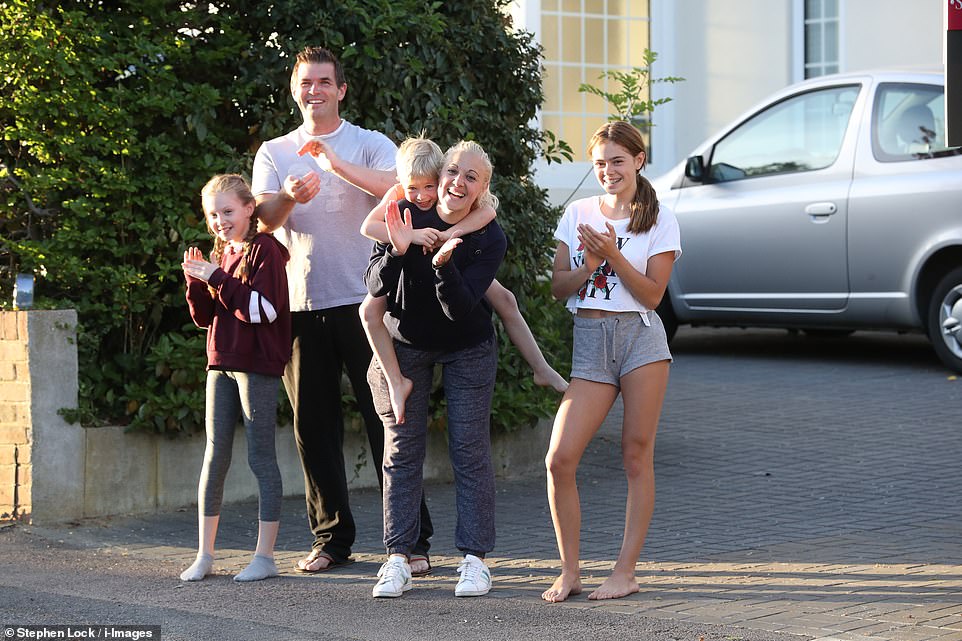 Residents in Tonbridge, Kent, take part in the tenth Clap for Carers, on what the organiser says should be the last week that the national event takes place 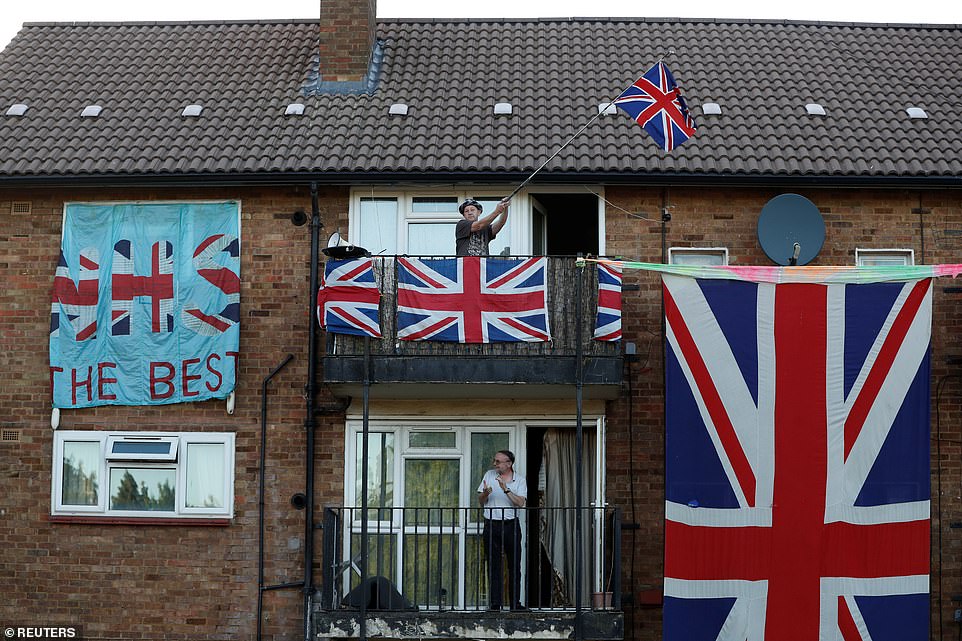 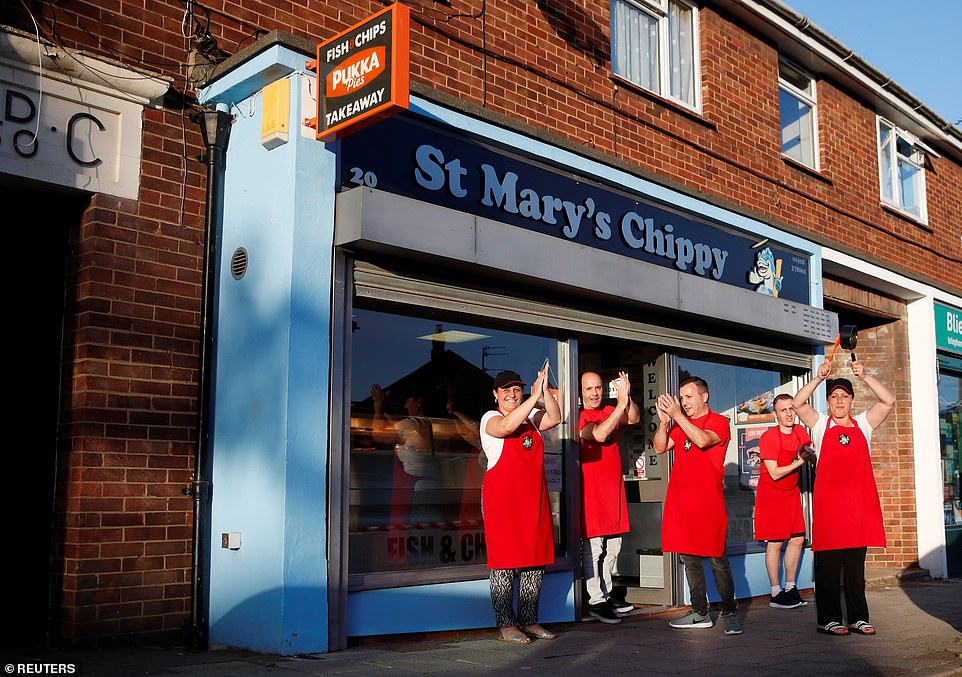 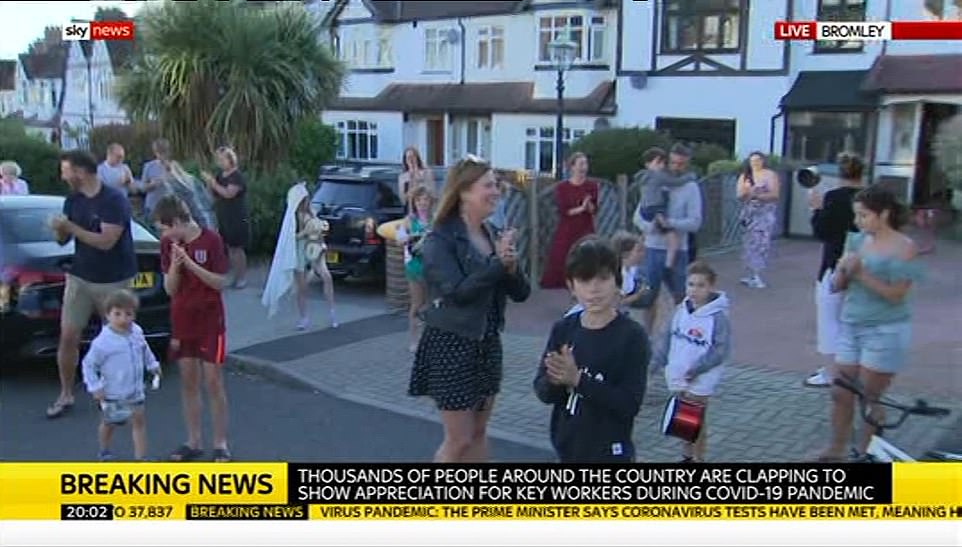 Members of the public come together in Bromley to applaud the NHS this evening, for the 10th weekly Clap for Carers event 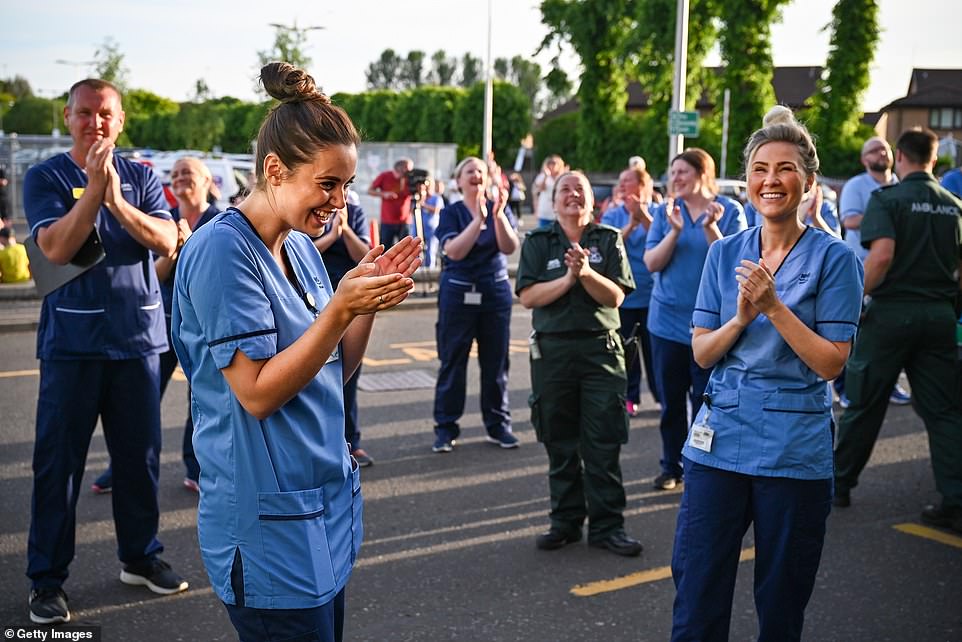 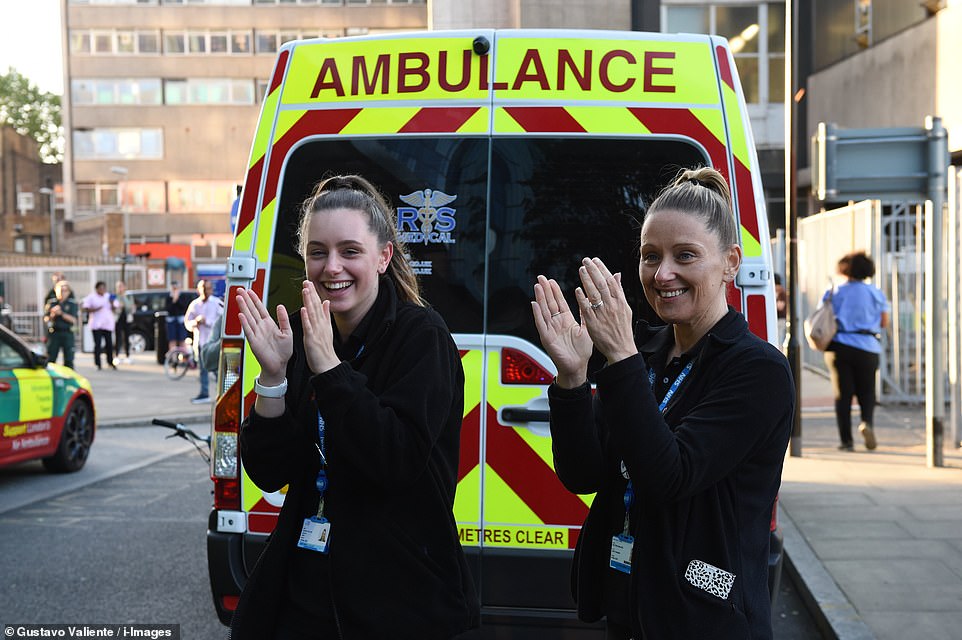 NHS staff and members of the public gather outside the Royal London Hospital, during the potential final clap for our carers

Although she hopes neighbours will still come out onto their doorsteps to socialise at 8pm on Thursday, the mother believes it’s now time to concentrate on concrete steps to improve conditions for key workers.

Ms Plas, a Dutch national living in South London, said she was ‘overwhelmed’ by the support for the cacophonous ritual, but said it was better to stop when it was at ‘its peak’.

An NHS doctor has also backed calls to end Clap for Carers because the weekly ritual has become a ‘stunt’ hijacked by politicians, she said.

London hospital doctor Meenal Viz, who has worked on the front line during the coronavirus pandemic, said she supports ending the event after tonight amid concerns it has become too political. 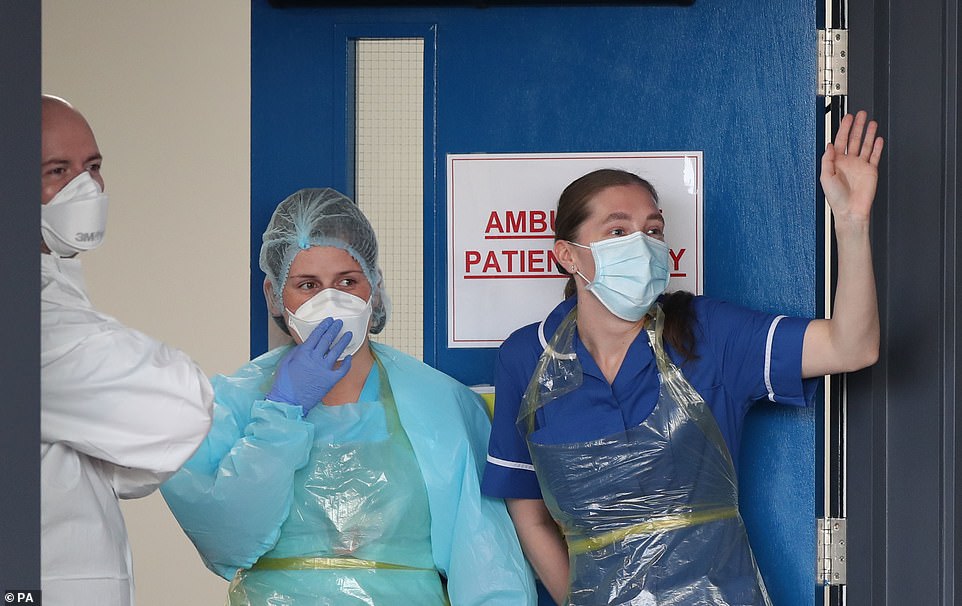 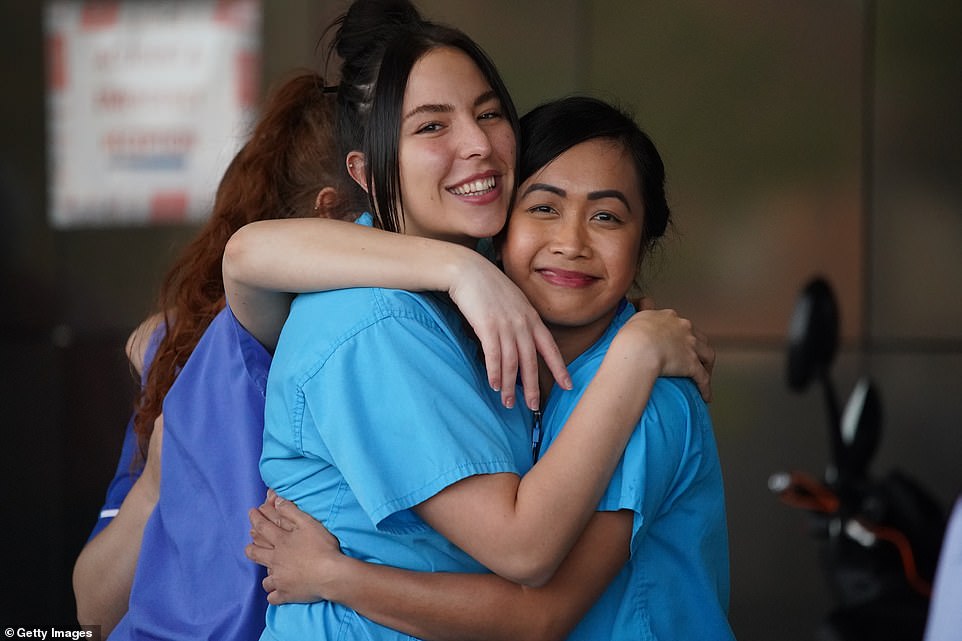 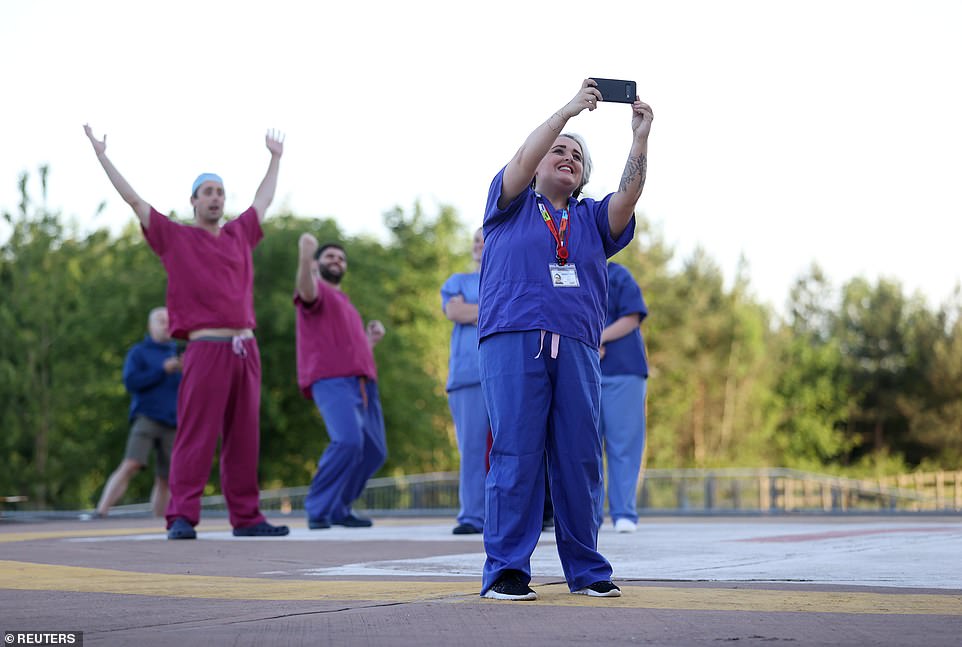 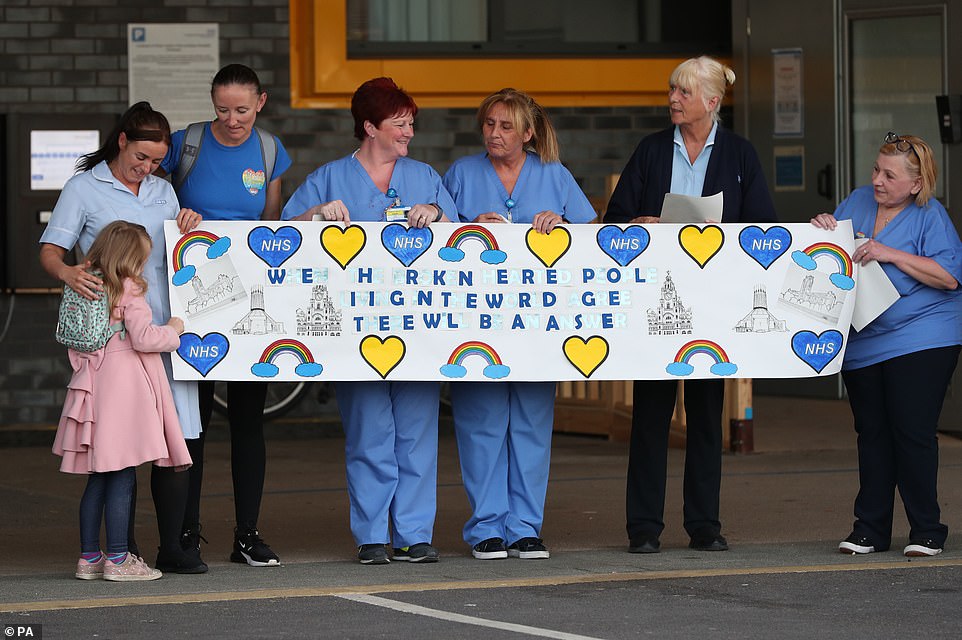 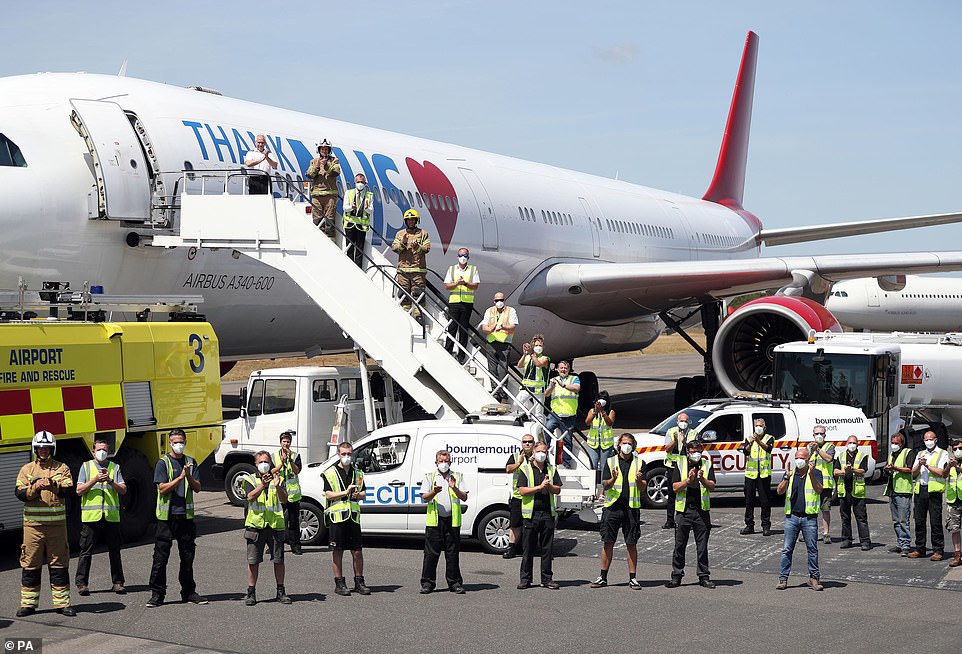 The crew of a European Aviation Group flight, about to depart for China to collect PPE, stand in front of their plane at Bournemouth International Airport, alongside staff and fire fighters, as they join in the Clap for Carers event 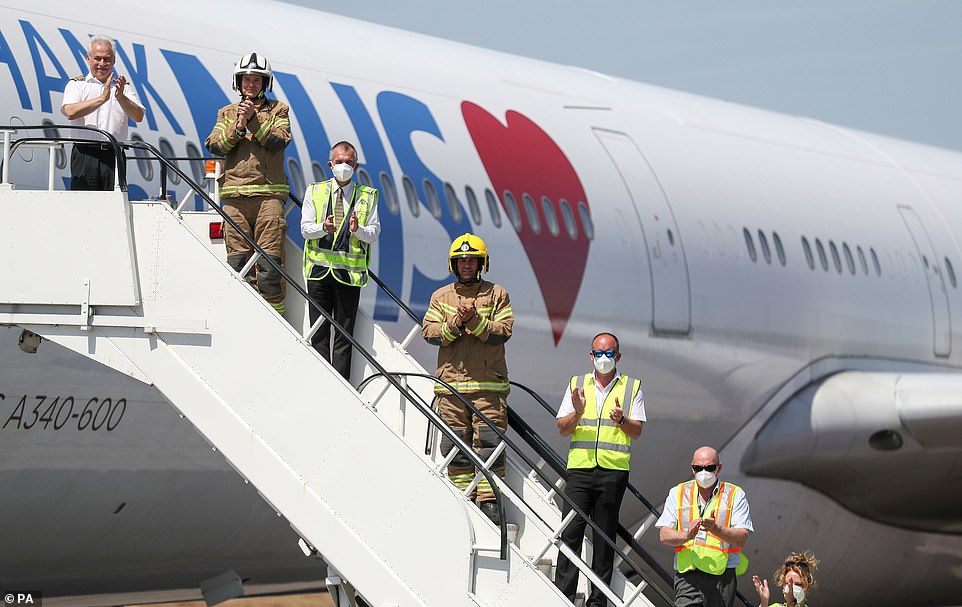 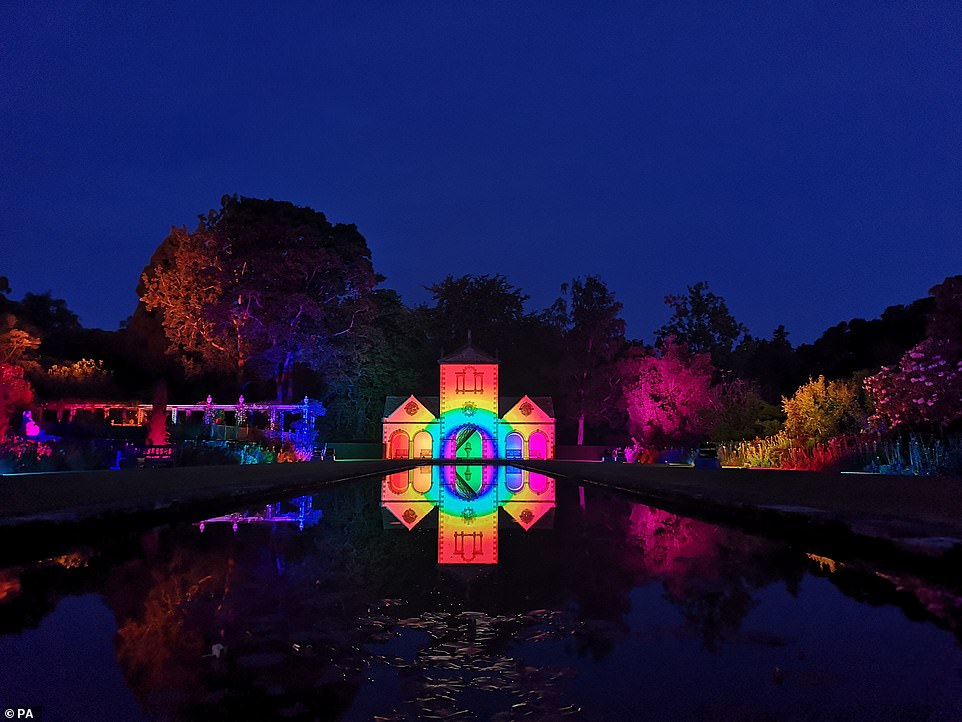 The National Trust’s Bodnant Garden near Colwyn Bay, Conw, bathed in rainbow light ahead of the weekly Clap for Carers

Dr Viz, 27, said the weekly applause had started from everybody showing gratitude for the NHS, showing their love for ‘this amazing healthcare system’.

‘But it went from that to being a stunt that the politicians chose to do,’ she added.

‘They used it and abused it, so they could show the public they were supporting it and then go straight into Number 10 Downing Street and make decisions which negatively impacted on the NHS and care workers.

‘I’m not saying they should not support it – by all means applaud. But don’t let your actions betray that. The Government has failed to protect the NHS.’

Dr Viz, who is seven months pregnant with her first child, is backing a crowdfunding campaign to challenge the Government over personal protective equipment (PPE) for NHS staff. 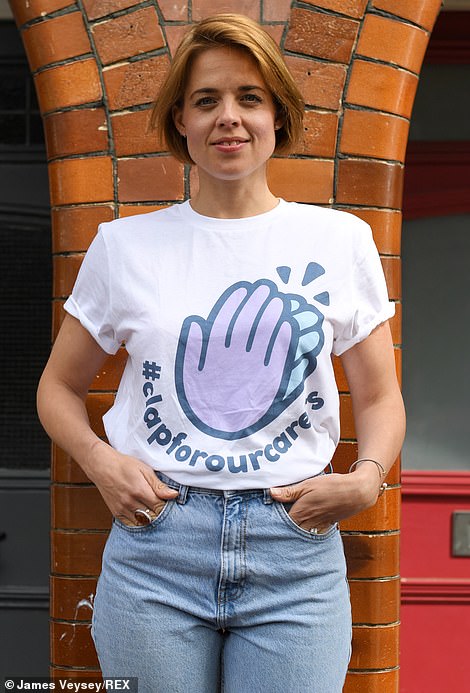 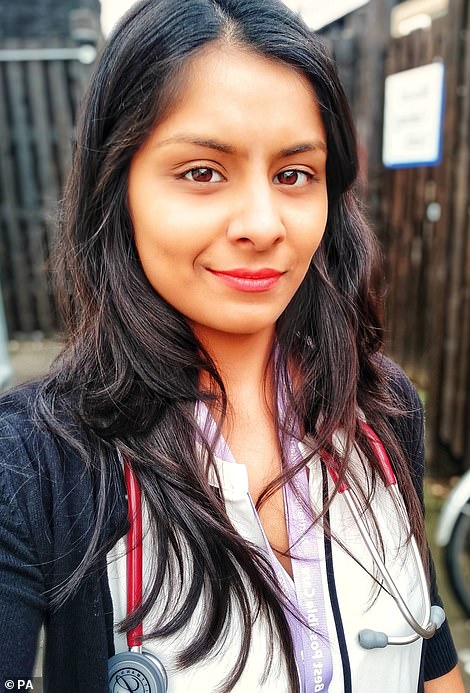 Annemarie Plas, the founder of the event, called on Britons to concentrate on other ways to support the NHS and make tonight the last one. London hospital doctor Meenal Viz, who has worked on the front line during the coronavirus pandemic, said she supports ending the event after this week amid concerns it has become too political

Dr Viz said: ‘It’s not just a shortage of PPE.

‘From a mental health perspective we have been put in a warzone and only been given a butter knife.

‘I think ending the clap is a very powerful statement by the public to say we’re not happy with this.

‘It’s a very brave move by Annemarie Plas. In fact I think by not clapping it is showing more support for the NHS.

‘It has been a morale boost. But I hope the gratitude was not just through the clap. I hope support continues in other forms.’

Dr Martin Porter also appeared on GMB today and said there was a risk the weekly clap would lose its importance.

‘With all of these things if you carry them on for too long fatigue sets in,’ he said, but added: ‘It’s been a beautiful thing.’

Former glamour model Linda Lusardi – who herself battled coronaviurs – disagreed and worries that people will forget about the dangers of coronavirus.

‘If we lose that completely people are just going to think this virus has gone away,  which it hasn’t,’ she said. ‘We’re not out of the woods yet.’