Disney confirms its first bisexual lead character in an animated series: The Owl House features 14-year-old girl named Luz dancing with a girl who has a crush on her at prom

Disney now has its first ever bisexual lead character, thanks to The Disney Channel animated series The Owl House.

Following the debut of a recent episode in the series, show creator Dana Terrace revealed on Twitter that the series’ lead character, Luz Noceda – a Dominican-American girl – is definitely bisexual.

The Owl House, which premiered in January, centers around 14-year-old Luz who finds a portal to a fantasy world and attempts to fulfill her dream of becoming a witch while attending school there.

Terrace tweeted that she had originally been told not to include any LGBTQ relationships in the series, but that she fought to represent them

Previously, Luz was shown as being attracted to male characters, but in the recently aired episode ‘Enchanting Grom Fright,’ the series started to explore a relationship between Luz and Amity Blight, a female student at the school.

In the episode, Amity says she has feelings for Luz and wanted to ask her to go to Grom, a prom-like event. While there, the two dance together. 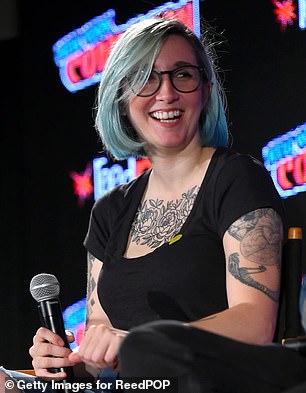 Terrace is pictured in October 2019

In her tweets, Terrace confirmed that Luz is bisexual and said that she had fought with ‘certain Disney leadership’ to ensure ‘queer kids’ were in the main cast of her show.

Terrace, 29, first noted that she made ‘a prom episode to make up for my own experiences. Back then PROM was an anagram for “Perennial Ritual Offering Maiden”.’

She then went on to tweet that during development of the series, ‘I was very open about my intention to put queer kids in the main cast. I’m a horrible liar so sneaking it in would’ve been hard haha,’ she tweeted.

‘When we were greenlit I was told by certain Disney leadership that I could NOT represent any form of bi or gay relationship on the Channel.’

Terrace refused to back down from her desire to represent LGBTQ characters on the show, however.

‘I’m bi! I want to write a bi character, dammit! Luckily my stubbornness paid off and now I am VERY supported by current Disney leadership,’ she wrote, thanking her crew and specifically name-checking Doug Bensimon, director, current series at Disney Television Animation.

‘Representation matters! Always fight to make what YOU want to see!’ Terrace wrote. 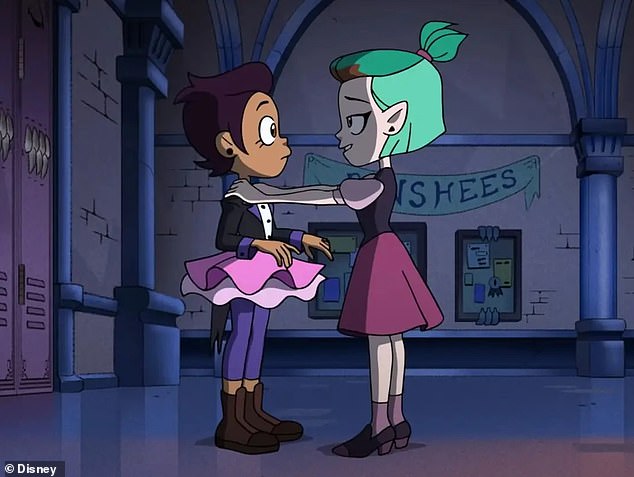 The episode featured Luz (left) and Amity (right) attending their fantasy world’s version of prom, called ‘Grom,’ where the two shared a dance

Alex Hirsch, who created Disney’s Gravity Falls, said that he had previously been forbidden to include any LGBTQ references in the show. Terrace once worked on Gravity Falls 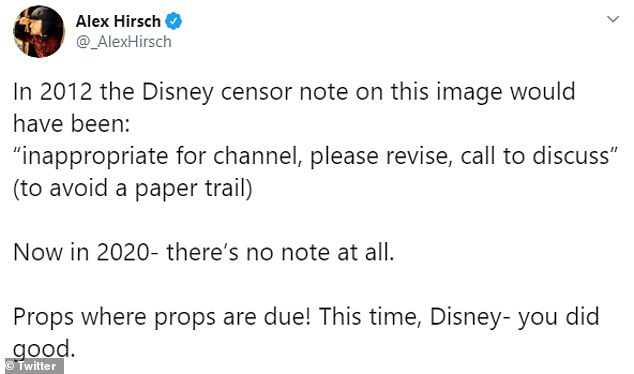 Alex Hirsch, creator of Disney animated series Gravity Falls, which Terrace had worked on in the past, tweeted about his own experience with trying to introduce an LGBTQ character into his series.

‘Back when I made GF Disney FORBADE me from any explicit LGBTQ+ rep. Apparently “happiest place on earth” meant “straightest,”‘ Hirsch wrote on Twitter.

‘But as of today, thanks to @DanaTerrace & team there are explicitly queer ANIMATED MAIN CHARACTERS on DISNEY TV. Im so proud & happy to say that,’ he added.

Hirsch also tweeted out a picture of Luz and Amity dancing.

‘In 2012 the Disney censor note on this image would have been: inappropriate for channel, please revise, call to discuss” (to avoid a paper trail) Now in 2020- there’s no note at all. Props where props are due! This time, Disney- you did good,’ Hirsch wrote, commenting on the image.

On Friday, Terrace returned to Twitter to address the early trouble she’d had over including LGBTQ characters in her series.

‘I will never be fully aligned with Disney as a company, however I’m not about to fully blast the execs that HAVE fought for me. Only love for allies,’ she tweeted.

In 2017, live-action Disney Channel series Andi Mack featured a main character that revealed he had feelings for another male character. It was the first time a gay storyline had been included in one of the network’s shows.

According to The Hollywood Reporter, at the time Disney’s written policy on characters and storylines were meant to emphasize inclusion, ‘with stories that reflect acceptance and tolerance and celebrate the differences that make our characters uniquely wonderful in their own way.’

LGBTQ characters had previously appeared in Disney movies and TV shows in either minor or non-recurring roles.