THIRD of bars, pubs and clubs could close by NYE: Hospitality bosses plead for CLARITY from ministers on Covid restrictions – as industry facing ‘cataclysmic Christmas’ pleads for financial support

A third of bars, pubs and clubs could close by New Years Eve as hospitality bosses plead for clarity from ministers on Covid-19 restrictions.

The industry is facing a ‘cataclysmic Christmas’ and bosses have called for financial support amid a rise of the Omicron variant.

Peter Marks, chief executive at REKOM, told BBC Radio 4’s Today programme running a nightclub has been ‘really tough’ and called for ministers to cut VAT for venue entry. ‘If we have restrictions we need money to survive,’ he added.

A survey by the Night Time Industries Association (NTIA) of more than five hundred nightclubs, bars, pubs and hospitality venues has today revealed that the sector faces a ‘cataclysmic Christmas’.

One fifth of nightlife businesses could lose their entire workforce, and one third fear closure within a month without urgent Government support following new Covid restrictions and omicron uncertainty.

On average, night time economy venues have lost £46,000 per unit in lost sales and cancellations during the festive period. 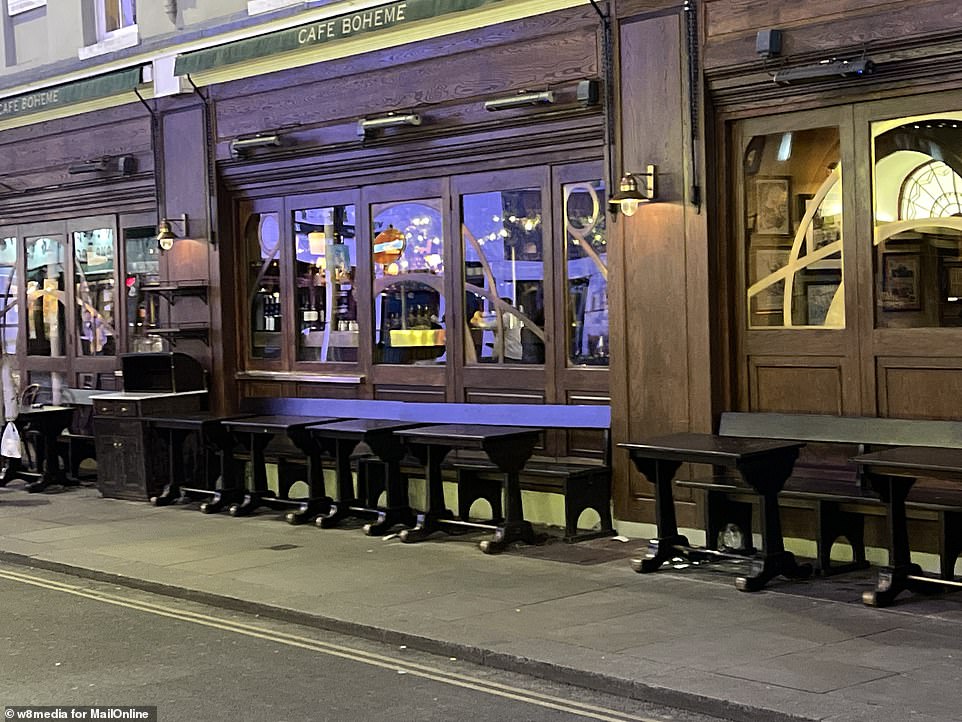 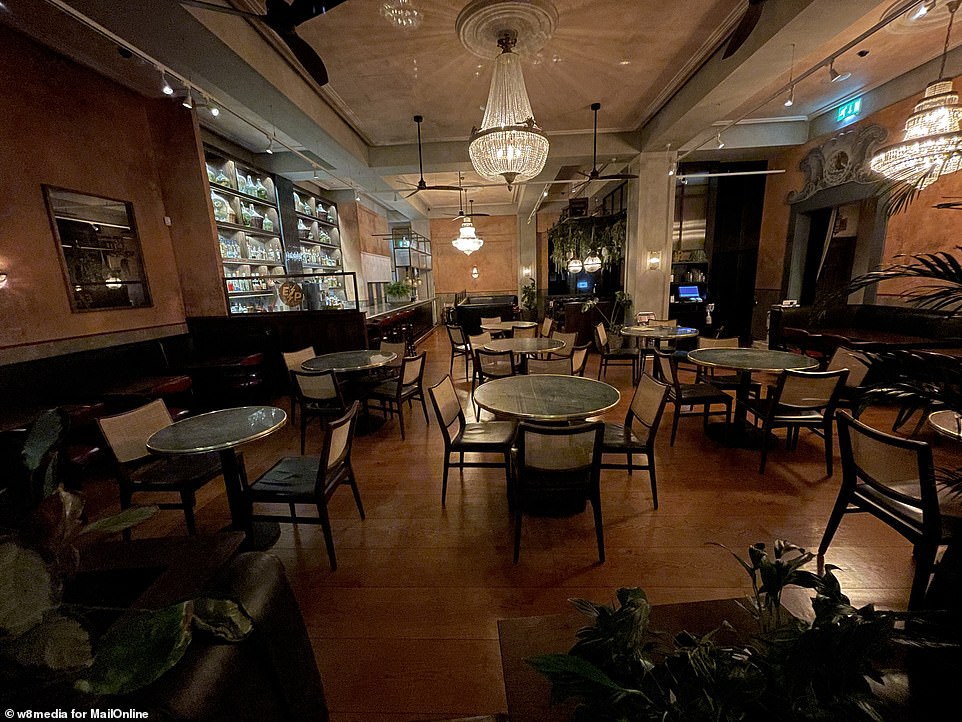 Restaurants and bars are closing up early and some are even closed down due to very little trade with the effects of working from home, and concerns over new covid-19 infections 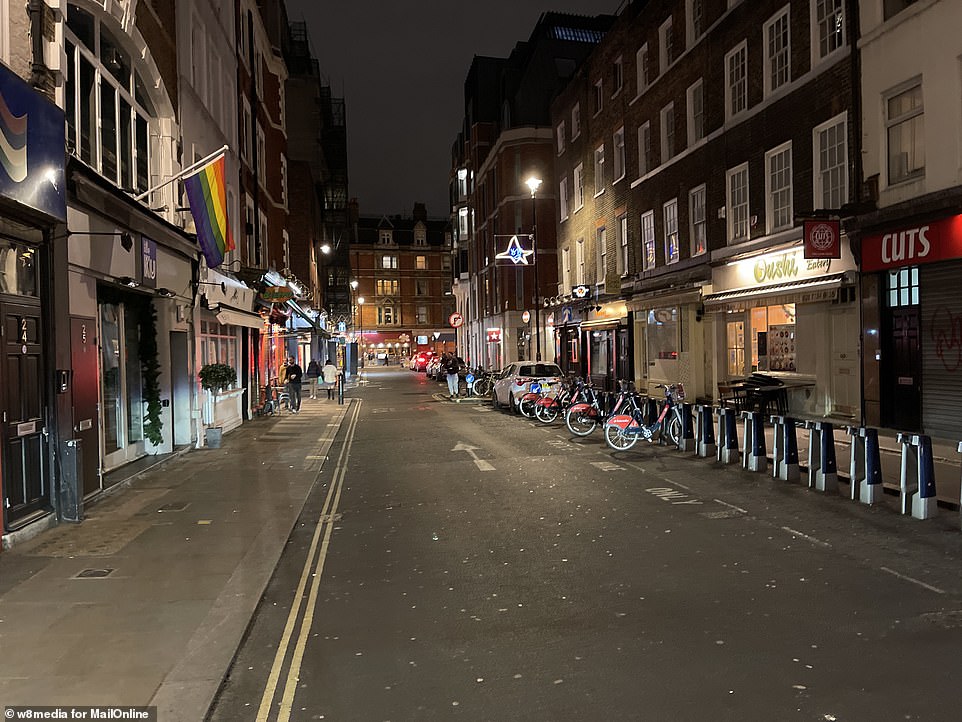 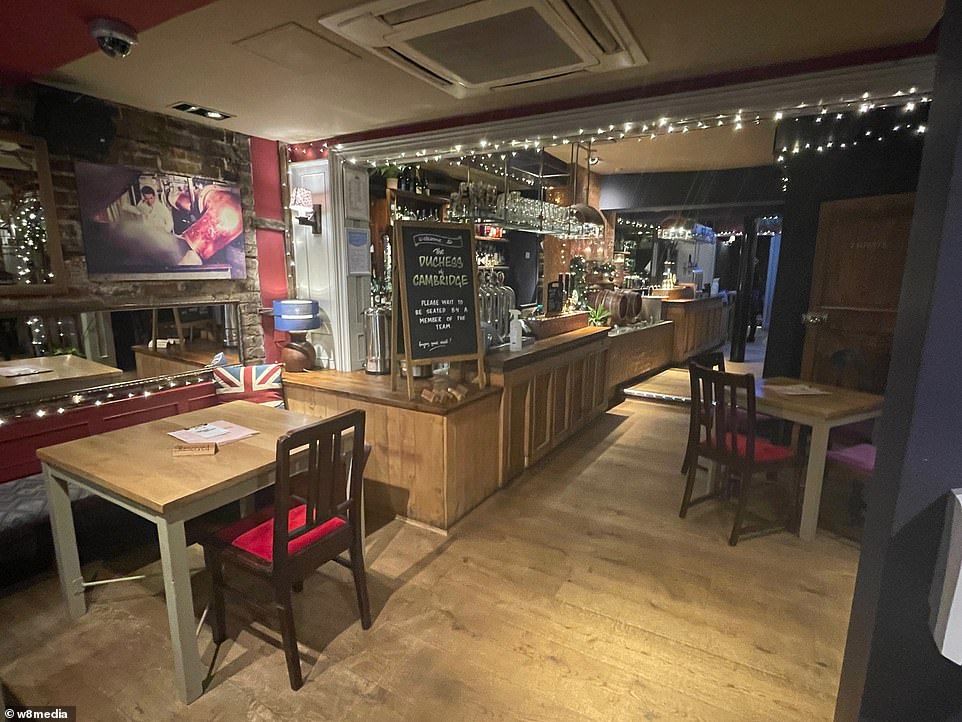 Over half of businesses required to introduce Covid Certification for entry to their premises report witnessing over a 40 per cent drop in footfall.

And half of all businesses in the night time economy will have to cut over half of jobs in their workforce if the Government does not provide commensurate financial support.

Mr Marks added: ‘We can’t say how much the problem of shrinkage we’ve had in the last few days has been down to vaccine passports and whether it’s been down to the fear of going out. What I can tell you is we’re running at 40 per cent down at a period of time which is absolutely critical for us as a business, starting at next weekend thinking well we’re probably okay until Christmas now albeit limping along but may not even be opening New Years Eve which is worth about 8-10 per cent of our annual profit.’

He said REKOM’s staff are on standby without clarity on whether nightclubs will be open following Christmas.

‘Stock is another thing,’ he added. ‘Do you order stock ready for new years eve and suddenly find it’s going to sit in the cellar because you’ve closed. It’s impossible to plan for.’ 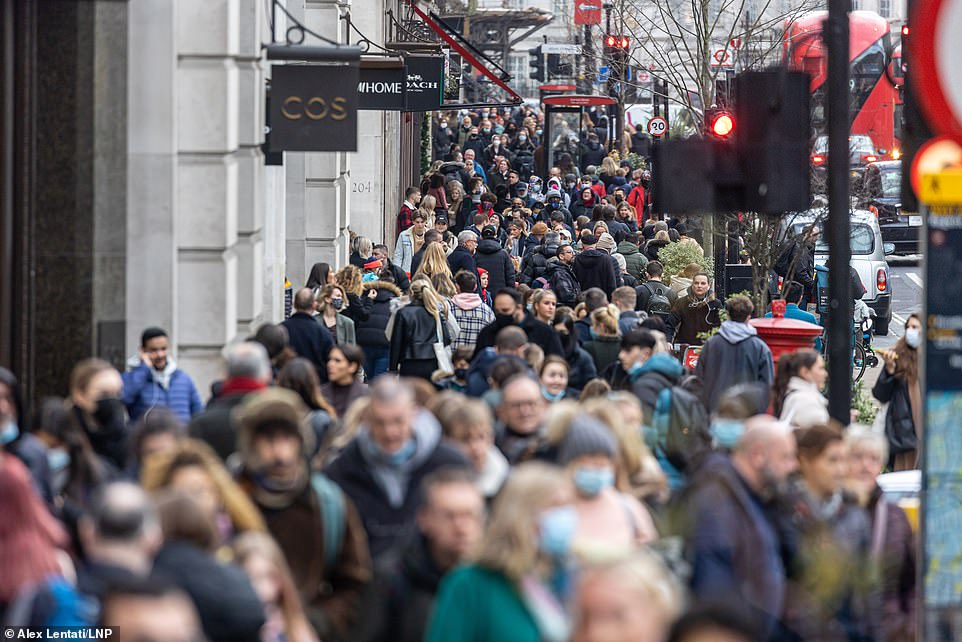 Packed pavements: It was thought many were staying at home due to fears over the new variant but hundreds packed Regent Street for last minute Christmas shopping yesterday afternoon

‘We need help and the best thing you could do for nightclubs is include door admission in the reduced VAT position that you’ve given to pubs and restaurants that sell food and that’s encouraged survival there. That’s a very easy way you can target nightclubs and live music venues and help them. It needs backdating.’

Michael Kill, Chief Executive of the NTIA, said: ‘It really is a chilling prospect to see so many venues in our sector left to bleed, with a lockdown in everything but name and absolutely no recognition of this from the Government.

‘These venues have faced over twenty months of financial hardship and the Christmas trade period was integral to keeping those surviving businesses afloat in the upcoming year.

‘If further restrictions are to be implemented, the Chancellor must step in and recognise the huge damage that waves of cancellations, driven by mixed Government messaging, resource intensive Covid protocols and costly restrictions actually have.

‘The Government have had twenty months to learn how our sector operates; it is beggars belief we stand here again, as if back in March 2020, imploring the Government to listen to us, to understand how businesses work and to realise that inaction is a death sentence for our industry. It really is a Cataclysmic Christmas.’

Sacha Lord, Night Time Economy Advisor for Greater Manchester, said: ‘Whilst shocking and upsetting, these latest stats don’t come as much surprise. The industry have been unanimously calling on the Chancellor for both support and leadership. To date, our calls have fallen on deaf ears and for some, it is already too late. If the UK’s fifth biggest industry has any hope of survival, he must come forward, urgently.’

The Christmas plans of thousands were also thrown into potential chaos after one in four rail operators cancelled services yesterday because of staff illness.

On what would typically have been one of the busiest tourism weeks of the year, the Natural History Museum closed yesterday owing to staff absences because of the ten-day isolation requirement.

It was joined by a string of other London museums and art galleries as well as Edinburgh Castle.

Meanwhile, West End shows including The Lion King and The Book of Mormon were also cancelled for a week because of Covid outbreaks among cast and crew, and performances of The Nutcracker at the Royal Opera House have been called off until January.

Theatre impresario Sir Cameron Mackintosh told the BBC: ‘Whether we’re shut by the Government or shut by stealth because of all the mixed messages… the Government does need to step in and help.’

His call came as the capital’s New Year’s Eve celebration planned for Trafalgar Square was cancelled ‘in the interests of public safety’.

Pubs, restaurants and bars recorded a 40 per cent slump in sales at the weekend while the owner of the Greene King chain said some sites were down 80 per cent on pre-pandemic levels.

Emma McClarkin, of the British Beer and Pub Association, said Government caution over the Omicron variant – with the introduction of Plan B measures such as working from home – had caused public confidence to ‘nosedive’.

‘Our recovery has been set back by at least six months,’ she added. ‘We are right back to square one – it is like snakes and ladders.’

Simon Emeny, of pub chain Fuller, Smith and Turner, announced at the weekend he had decided to close 20 of its busiest London venues because of a lack of footfall.

He said yesterday: ‘The Plan B advice is damaging city centres. The Christmas party season has been severely curtailed.

‘Once people have had a booster there is no reason they shouldn’t get on with their lives. If Plan B is kept any longer than necessary it will halt our recovery.’

It is feared one in ten pubs – around 5,000 – have had to close permanently since the start of the pandemic, with a slump in Christmas takings potentially signalling a death knell for many more.

Yesterday Michelin-starred restaurant Portland was among dozens in the capital to announce it was closing until January with customer numbers slumping.

Andrew Taylor, who owns gastropub Mr Fox in Croydon, south London, which has faced an 80 per cent drop in bookings, said: ‘Hospitality is locked down in all but name. It is going to cause thousands of businesses to close and tens of thousands of job losses.’

Yesterday around 13 per cent of trains were cancelled or behind schedule, with eight of the 28 major rail operators experiencing coronavirus-related staff problems.

It came as next week’s episodes of ITV’s breakfast show Good Morning Britain were axed to ‘protect’ staff amid fears over Omicron. It will return on January 4.