A THIRD of local authorities in England suffered a spike in Covid-19 cases among vulnerable over-60s during last week of lockdown, official data shows

Nearly a third of areas in England recorded a spike in coronavirus cases among over-60s during the last week of lockdown, official figures show.

A total of 101 out of 315 local authorities saw Covid infections rise in over-60s rise in the week ending December 1, according to the most recent Public Health England data. Number 10 is using Covid-19 rates in that age group – who are most vulnerable to the disease – as a key factor to help it decide which Tier to put towns and cities in.

Gosport, in Hampshire, recorded the sharpest rise in over-60 infections week-on-week, with cases nearly tripling from 62.1 per 100,000 to 243.9 over the seven-day spell.

The PHE data shows cases among over-60s more than doubled in six other local authorities, despite the draconian national shutdown being in place for a month.

Officials said care home outbreaks could account for some spikes in infection rates but community transmission has also played a large role. The Government is concerned about cases in older people because they are the most likely to fall critically ill and put pressure on the NHS. 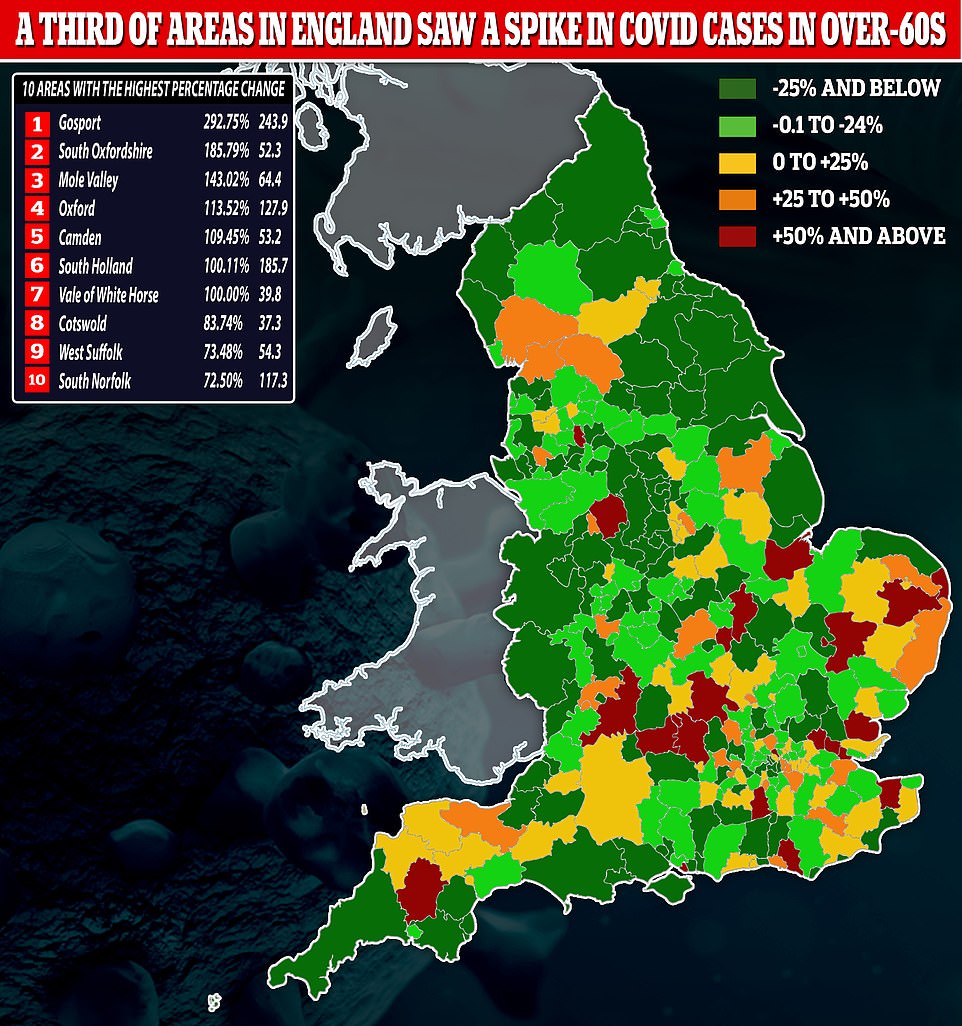 Gosport, in Hampshire, recorded the sharpest rise in over-60 infections week-on-week, with cases nearly tripling from 62.1 per 100,000 to 243.9 over the seven-day spell

TO FIND OUT INFECTION RATES AMONG OVER-60S IN YOUR AREA, SCROLL DOWN

Rounding out the top five local authorities that saw the biggest increase in case rates among people over 60 were Camden, in north London, and Oxford and South Holland, in Oxfordshire.

At the other end of the scale, Carlisle, the Isle of Wight, Hertsmere in Hertfordshire, Adur in West Sussex and Knowsley in Merseyside recorded the biggest drops in over-60 infections in the seven days to December 1.

The majority of local authorities (203) recorded decreases in infections among over-60s in the week up to December 1, the day before the national measure ended.

Despite the surge in infections, Gosport was only put in Tier 2 when the lockdown ended on December 2, presumably because all but two places in Hampshire have seen total infections fall.

So too was Oxfordshire, despite Oxford, South Oxfordshire and the Vale of White Horse all seeing cases among people over 60 at least double.

The county actually saw overall infections drop by 20 per cent in the most recent week, according to separate PHE figures, which may explain why it was only in second-toughest lockdown bracket.

The positive news is that, overall across England, cases in all age groups are declining – including the elderly who are most at risk.

Officials claim they looked at several criteria when deciding on what Tiers to put each part of England in following the second national lockdown.

They include total number of Covid-19 cases in an area, the number of cases among over-60s, the rate at which cases were rising or falling, the proportion of test results coming back positive and the pressure on the NHS.

It comes as Health Secretary Matt Hancock claimed today that every corner of the UK now has doses of Pfizer/BioNTech’s Covid-19 jab ahead of the start of Britain’s biggest ever vaccination drive tomorrow.

Fifty hospitals are geared up to start administering vaccinations from tomorrow morning – on what has been dubbed ‘V-Day’.

Over-80s, care home staff and NHS workers deemed at higher risk are temporarily at the front of the queue for the mammoth operation, which officials hope will be the beginning of the end for the pandemic.

No10 brought the first batch of an initial 800,000 doses over from Pfizer’s manufacturing plant in Belgium last week in a top secret operation via the Eurotunnel in a fleet of unmarked lorries.

Health bosses say the UK will get up to 4million doses before the end of the year — enough to inoculate 2million people because the jab requires two shots taken 21 days apart.

Mr Hancock today tweeted: ‘All parts of the UK now have doses of the coronavirus vaccine. I want to thank the whole team involved in rolling out the vaccine across the whole UK, starting from tomorrow – great progress.’

Despite his claim, it was revealed that three NHS trusts in coronavirus hotspots will no longer get access to Covid vaccines this week. Jabs won’t be available in areas without hospital hubs until December 14, when GP surgeries and purpose-built vaccination centres take part in the mass roll-out.

No sites in Leicester or the surrounding county — which is in Tier Three — will be able to give the vaccine just yet, after officials revised the original list of 53 hospital hubs to remove a handful of facilities. Two NHS trusts in Kent — which is also under the toughest restrictions — have been removed from the list, the HSJ reported.

Labour’s Shadow Health Secretary Jonathan Ashworth said: ‘Why hasn’t a Leicester hospital been designated as a hub? We have effectively never left lockdown restrictions and our NHS staff have been working so hard… We just want fairness for Leicester.’

Britain became the first country in the world to approve a coronavirus vaccine last week, after regulators gave Pfizer/BioNTech’s jab the green-light. Rigorous scientific trials have found it is 95 per cent effective, works in the elderly and is safe.

No10 has ordered 40million doses of the jab, which will arrive in batches and be shared equally among the UK. No other vaccines have yet to be approved — but officials hope Oxford University’s jab will be rubber-stamped before Christmas.