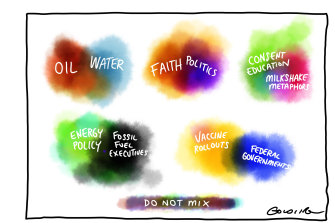 To submit a letter to The Age, email [email protected] Please include your home address and telephone number.

One reason the federal government might set wheels in motion to properly address aged care reform is that it is no longer simply a question of paying for “improvements”. The most crucial new recommendation of this royal commission is that Australian aged care needs to become rights-based in favour of the elderly who need it.

At the moment, aged care is an “industry”, where those running the “business” have full say over what care is (or isn’t) provided and what elderly people can (and can’t) do once they have entered the system.

There are only two areas left where Australia has not progressed from using institutions for solutions – prisons and aged care. The former are possible to avoid; the latter awaits us all unless rights-based aged care reform is achieved.
Ruth Farr, Blackburn South

Think of it like this
I ask all the horse lovers who oppose culling brumbies to protect our national parks: how many of you let your horses roam through your front garden or your vegetable patch? (“Stalking horses”, The Sunday Age, 25/4.)

My guess is none. Horses destroy trees, shrubs and pasture. They foul waterways. Responsible owners (and those who prize their garden beds) keep their horses confined in paddocks.
Try thinking of our national parks as the Yorta Yorta’s garden, and maybe their despair at the damage caused by wild horses and other introduced species will resonate deeper.

By the way, I have five horses, all paddocked. The last thing I want is their hard hooves in my rose bushes.
Jillian Staton, Tarwin Lower

Letting our mask down
Much has been said about the lack of mask wearing on public transport since restrictions have been eased.

I travelled to Melbourne on Friday by train for my COVID-19 vaccination. Despite the announcement before boarding the train, several commuters caught the train from Gisborne mask-less.

There were several other fellow passengers on board already without masks. The announcements are being ignored. The return trip was similarly patronised by non-mask adherents.
Most female passengers on my train and tram trips were obeying the directive. I’m alarmed that younger males, particularly, are flouting the rules when we know how easily the virus spreads.

No one was challenged for not wearing a mask. The recklessness of these people must be addressed until enough of the population
is vaccinated.
Sue Anson, Mount Macedon

If that’s the case ...
Defence Minister Peter Dutton besmirched Victoria’s proposed quarantine facility as “political smoke and mirrors”, and he says that hotel quarantine is working well and can be “easily scaled up”.

How is this safe?
My household has been ″⁣selected at random″⁣ to participate in an Australian Bureau of Statistics household survey. Participation is mandatory under the 1905 Census and Statistics Act, and no remuneration is provided.

Yet the ABS gives no option but to complete the survey in person with an ABS interviewer. They will not allow completion of the survey over the phone, online, on paper or via video-conferencing. Instead, they send interviewers from house to house, workplace to workplace to ask the survey questions in person.

How is this a COVID-safe practice? So many organisations and businesses have rightly modified their methods to keep the community safe, but the ABS refuses to do the same.
Caitlin Stone, Brunswick East

Hardly equal footing
While I agree with your correspondent that some countries have been affected by COVID-19 worse than others, and that the Olympics should be put on hold for as long as COVID-19 remains a threat (Letters, 1/5), I almost choked on my breakfast at the claim that the Olympics bring countries together as equals, regardless of GDP.

Does the writer seriously believe that a small country whose citizens struggle to put food on the table stands the same chance of being competitive in the Olympics, let alone winning, as a wealthy country with a huge population, such as the United States?
John Howes, Rowville

It’s a good idea
Congratulations to the Andrews government for suggesting a Howard Springs-style operation in the newly operational quarantine facility on Donnybrook Road, Mickleham.

I drive on this road often and have seen the recently built secure quarantine facility for plants and animals with plenty of room in the highly fenced land for expansion.

It is closer to the Hume Freeway than the newly constructed housing estates along this road. It’s close to hospitals, it’s close to Melbourne Airport, where most travellers enter Victoria, and it’s close to city hospitals.

Quarantining is border protection and this is ultimately a Commonwealth responsibility, and Canberra should be funding it and helping to run it.

It is already a quarantine area, so why not have people quarantining there also? It’s a good choice.
Margaret Forster, Aberfeldie

Note from the Editor

The Age’s editor, Gay Alcorn, writes an exclusive newsletter for subscribers on the week’s most important stories and issues. Sign up here to receive it every Friday.