‘This work is not done’: Children still dying amid family violence

Victorian children have already been born and died from abuse in the five years since the Royal Commission into Family Violence was sparked by the brutal death of 11-year-old Luke Batty.

At the five-year anniversary of the commission, Liana Buchanan, Victoria’s Principal Commissioner for Children and Young People, said the needs of young people must be the top priority for the government for the next five years – warning of the catastrophic consequences of slow-paced reforms. 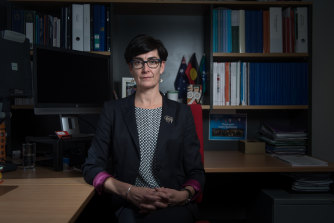 “There are [individual] cases I cannot talk about that I see in our inquiries,” Ms Buchanan said.

Luke Batty was beaten and knifed to death by his father in 2014. His mother, Rosie Batty, began a campaign against family violence that led to the royal commission, which handed down its report on March 30, 2016.

According to the Coroners Court of Victoria, 65 children who were known to child protection authorities died in 2019-2020, the most recent year for which data is available. Five of the deaths were as a result of assault and 27 were suicides.

Among the 65 child deaths known to authorities, 44 had direct contact with child protection in the 12 months before their death.

Ms Buchanan, who is required by the government’s law reform commission to review the deaths of anyone in child protection, stresses that the state government’s work on family violence has been nation-leading and commendable.

“I remember the day that the royal commission report came down … and I remember walking down the street and hearing some of the recommendations, and I was physically moved,” she said.

“It was such a significant time.”

She said the amount of effort and investment that has gone into reforming family violence has been “incredible”, and in particular she has seen major improvements in the way schools, health workers, services and child protection agencies assess risk for young people. Reforms aimed at mothers have also no doubt benefited their children in some way, she said.

However, Ms Buchanan said the system has not lived up to the royal commission’s recommendation that young people be treated as clients separate from their parents, with children still rendered “invisible” in public discussion and policy.

“At the end of the five years, I’m concerned, I’m disappointed and my view is that there is an enormous amount still to be done,” she said.

First and foremost, Ms Buchanan said there is still “a serious lack” of therapeutic support for children who have experienced family violence.

“I had the chance to listen to a group of young people who experienced family violence [in the past five years] and they were very strong in saying, ‘we knew what was happening to us, we wanted to seek help, but there were no services that we could go to fix it separate to our mother or our non-violent parents’,” she said.

She said children she spoke to often recounted experiences in which no agencies ever spoke directly to them, and they were seen as mere extensions of their mothers.

“When they were in refuges, nobody spoke to them … even when matters went to court and some of the charges related to physical violence against the child, the child felt invisible,” she said.

“[For example] the perpetrator was named in court [but] that child was only ever referenced as ‘the complainant’s child’.”

With the potential for long-term emotional damage that can affect a child’s mental health, schooling outcomes and future relationships, Ms Buchanan is pained knowing how many young people are beginning their lives with unaddressed trauma.

Recent crime statistics show that between 2018-2019, one in 50 children witnessed a family violence incident that was attended by police.

Despite the implementation of the royal commission’s recommendation to prioritise funding for counselling for children, Ms Buchanan said the scale of programs available are “in no way” adequate for what is needed.

“I can’t tell you the number of children who I either meet and have contact with here, or indeed, whose cases I review, who have experienced severe family violence, but are not provided with the therapeutic support to recover from that violence,” Ms Buchanan said.

“I see many, many cases in which child protection is involved, and other cases, where the children aren’t even referred for counselling, or support, even after they’ve … been removed from the situation,” she said.

“I think those referrals are not made simply because there are not enough services.”

The implemented recommendation aimed to expand the Take Two child trauma counselling program to children outside the child protection system.

“[But] to my knowledge, there’s been no extra investments in that program. And… as far as I understand, that is a program that is absolutely unable to meet demand,” said Ms Buchanan.

The situation is even worse for young people who use violence, who Ms Buchanan said more often than not have been exposed to violence by another family member too.

“We simply do not have a system to intervene and support young people who use violence to address that behaviour,” she said.

In light of examples like this, Ms Buchanan said the government can’t afford to become complacent with merely ticking off the checklist of recommendations related to young people, at least three of which are behind schedule.

“There’s a real risk when we have a royal commission, when we have an incredible level of focus and investment by government on an issue, that after that flurry of investment and focus, we think the job is done,” she said.

“I can tell you based on what I see in my work every single day for children and adults, this work is not done.”

The commissioner wants the sector and the public to remember what brought about the royal commission in the first place: a young boy, who was known to many agencies, but who still died at the hands of his father.

“The trigger point was the death of a child, [and so] it is extremely sad to me that we have not seen the kind of shift to recognise child victims of family violence,” she said.

In 2019, the commissioner tabled a report to Parliament investigating the case files of 35 child suicides in Victoria. In almost every single case the children were living in a home with “severe” family violence, Ms Buchanan said.

“I see still, children being left in situations of significant violence and often other issues at home in terms of mental health and substance abuse, and levels of neglect with no meaningful intervention. Nothing, nothing being put in place to support that child or other family.”

While the commissioner said she recognised that generational reforms take time, she wants policymakers to continue to treat this as a crisis, and immediately shift from the default of assuming family violence is just about adults.

“We’ve come a long way, [in recognising domestic violence between partners] but we can’t afford, children can’t afford for us to take as long to have the same recognition for children.”

If you or anyone you know needs support, you can contact the National Sexual Assault, Domestic and Family Violence Counselling Service on 1800RESPECT (1800 737 732).