Time for a rollout reset, GPs say, with Pfizer freezers a major hurdle

Australia must develop a new, more centralised model for its COVID-19 vaccine rollout, with general practitioners unable to deliver the preferred Pfizer vaccine to younger Australians, disrupting plans for millions of vaccinations.

Doctors say mass vaccination clinics will be needed to inoculate people aged under 50 following the federal government’s decision late last week to preference the Pfizer jab – which cannot be easily stored at doctors’ surgeries – over AstraZeneca for this age group. 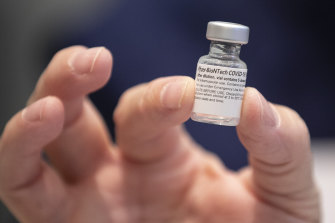 The country’s COVID-19 vaccine rollout is set for a major overhaul, with general practitioners unable to give the preferred Pfizer vaccine to younger Australians, disrupting plans for millions of jabs.Credit:AP

Australian Medical Association president Omar Khorshid said GPs – who had been given the responsibility of the bulk of the vaccine rollout – did not typically have the facilities in their clinics to store unopened Pfizer vials for two weeks at the required temperature of about minus 20 degrees.

“It can’t just go in the freezer in the tea room,” Dr Khorshid said. “And we just don’t have those facilities out there in the community. So therefore, even though we are now getting 40 million doses of Pfizer … we are going to have to deal with the logistics, which in our view means a more centralised model, where the vaccines are stored centrally and rolled out to bigger clinics where they know they’re going to be used within a short period of time.”

The federal government on Monday confirmed the vaccine rollout was being reviewed and would be “recalibrated” following recommendations from the Australian Technical Advisory Group on Immunisation.

On Thursday the expert group recommended the Pfizer vaccine be preferred for those under 50, due to a suspected link between the AstraZeneca vaccine and very rare cases of a clotting syndrome. 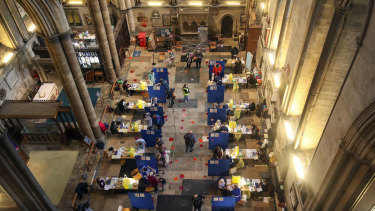 A mass vaccination centre set up inside Salisbury Cathedral in England in January.Credit:AP

Overseas, the use of public spaces – including Salisbury Cathedral in the south of England – as mass vaccination centres has worked well, allowing people to be socially distanced as they are immunised against COVID-19.

The US vaccinated 100 million people in eight weeks and Britain vaccinated 25 million – about half its adult population – using mass vaccination centre models.

The Victorian government is operating a number of mass vaccination sites, but they cater for essential workers and are yet to open to the general public. NSW has also pledged to open a hub in Homebush.

The Royal Australian College of General Practitioners’ Victorian chair Anita Munoz said the Pfizer vaccine would need to be dispensed from cold-chain hubs, unless new technology became available making it possible for GPs to distribute the drug.

We need people who are eligible to have access to locations (so) they can get vaccinated quickly.

Dr Munoz said she wanted to see mass vaccination clinics open to the general population eligible for an AstraZeneca vaccine, in addition to the GP program, if enough supply was available.

“We need for people who are eligible to have access to locations that mean that they can get vaccinated as quickly and as conveniently as they need,” Dr Munoz said.

“If that means a person will access that shot by going into the city to a mass vaccine hub, then so be it…

“[If] they feel safer to talk to their GP, which I think makes a lot of sense too, then they do it in the community.”

However, former Australian Medical Association president Tony Bartone stressed that more than 10 million people, including most Australians aged over 50 in the first three phases of the vaccine roll-out, were still likely to be immunised with AstraZeneca over Pfizer.

He said public confidence in AstraZeneca had suffered a significant blow from the change in clinical guidance, and it would take time to reassure the public – including the elderly, who are still eligible for the vaccine – about its benefits.

“Confidence about this vaccine is being tested in a significant way,” he said

The Victorian government said on Monday that its pause on administering the AstraZeneca vaccine to people under 50 might last for more than two weeks while it waits for the Commonwealth to distribute consent forms in languages other than English.

Acting Premier James Merlino said he still had confidence in the national vaccine program, but it required a reset.

“The implications … are quite significant and require a recalibration of the Commonwealth’s rollout,” he said.