Home » World News » Timing is everything: why some people return negative COVID tests despite being infected

Timing is everything: why some people return negative COVID tests despite being infected

On June 20, a physiotherapist from Perth’s northern suburbs who had travelled to Sydney to attend an event outside the city boarded a plane bound for WA.

Unknown to her, she had been infected with the highly contagious Delta variant of COVID-19 while having brunch at a popular Bondi cafe that would soon be listed as a virus hotspot. 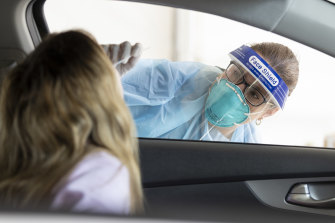 Health officials test a woman for COVID-19 at a drive-through clinic in Mindarie.Credit:Matt Jelonek/Getty Images

A COVID-19 test taken the day after her return to Perth came back negative but after developing flu-like symptoms five days later, a second test revealed she was infected.

By that stage, case 1022 had unknowingly spread the virus to three other people she had come in contact with and was about to send Perth and Peel into a snap four-day “circuit breaker” lockdown.

Why did she test negative for coronavirus if she was infected? And how can we prevent false negatives from occurring?

Curtin University Professor Archie Clements, who specialises in the spread and control of diseases, said it might come down to timing.

For someone to return a positive result in a PCR test – the most common way WA health authorities test for COVID-19 – they must have the DNA of the virus in their mucosal surface in their nose and throat.

PCR testing – short for polymerase chain reaction testing – analyses swabs from the nasal cavity and throat of a patient to look for the unique genetic code of the virus and is considered the “gold standard” in diagnosis.

When a person inhales aerosols or droplets containing the virus, the germs hijack the body’s cells and start replicating until they create enough viral particles to shed and infect others.

However, it takes several days for the virus to multiply enough for its DNA to show up, which means early infections might not be picked up by a swab.

Similarly, COVID-19’s genetic material breaks down fast once it stops replicating and can vanish from testing range within 10 days of symptoms disappearing.

“When the first test happened, [case 1022] would have been exposed but they weren’t yet producing viral particles so they won’t be detectable by PCR,” Professor Clements said.

“The latent period is five days, but you could start secreting virus at least a day before that.”

That means a person becomes infectious about four days after catching COVID-19 but it might take another 24 hours for them to develop symptoms.

Research by Johns Hopkins Medicine in the US found the best time to test a person was six to eight days after their exposure to the virus. 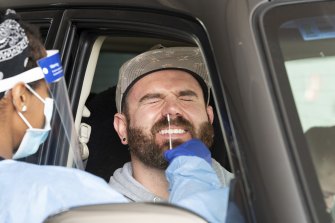 A man gets tested for COVID at a drive-through clinic in Joondalup. Credit:Marta Pascual Juanola

The analysis concluded patients were almost 70 per cent more likely to test negative even if they had the virus four days after exposure, compared to just below 40 per cent on day five. By day eight that plummeted to 20 per cent.

Case 1022 was first tested two days after catching COVID-19 at the Bondi cafe, which meant the chances of returning a false negative were almost 100 per cent. By the time she got tested again, she had been infected for seven days.

Among those infected by the physiotherapist is case 1028, a 37-year-old man who caught the disease at a gym in Joondalup.

Like case 1022, he first tested negative for the virus on Monday before retuning a positive test two days later.

That means anyone who was potentially infected over the weekend could still return negative results even if they had the virus.

Professor Clements said a way to address false negatives was to repeatedly test travellers from high-risk locations and their close contacts, particularly in light of the high transmissibility of the Delta strain.

“Some jurisdictions will require daily testing of someone who is a potential contact or who is coming into the area from a high-risk jurisdiction,” he said.

“The problem with developing symptoms is that by the time you develop symptoms you could already have infected other people. Repeat testing is probably not a bad idea.”

He said home testing kits could be a means to make repeat testing more palatable for those impacted and would reduce long waits at clinics.

The tests are popular in countries with a high incidence of COVID like the UK and Spain and are simple to use: a person swabs their throat and nose, swishes the wand in liquid and pours two drops into a reader.

If the reader displays two lines next to the letters ‘C’ and ‘T’ it indicates a positive result. One line next to ‘C’ is a negative reading and one line next to ‘T’ indicates the test may have been performed incorrectly.

However, Professor Clements said there had been a lack of motivation from Australian authorities to adopt the model, which was a better fit for countries that did not have an elimination strategy.