‘To be warm was wonderful’: Mountain residents grateful for small mercies

“Shock is a very strange thing,” 71-year-old Liz Millman says slowly. “The unknowns are still so great in my life. I don’t know where I’m going to be living … So just to be here, and just to be warm, and just for my feet not to be cold was just wonderful.”

For now, Ms Millman’s home is a self-contained unit at Nellie Melba Retirement Village, half an hour’s drive down the mountain from Sassafras in the Dandenong Ranges. 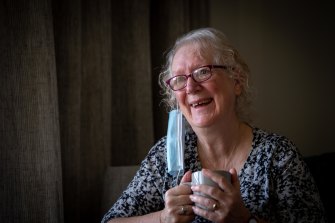 The facility has offered free accommodation to any Dandenong Ranges resident aged over 65 who cannot live at home because of damage or lack of power caused by devastating storms that hit Victoria two weeks ago.

A fortnight on, hill communities are still picking up the pieces. Thousands of residents and businesses remain without power, and the sound of chainsaws rings through the air.

At the height of the storm on June 9, Ms Millman sat alone in her car outside the Sassafras rental she calls home, trying to keep warm and dry, and wondering what on earth to do next.

Trees didn’t fall on Ms Millman’s home – unlike her daughter and son-in-law’s nearby house, which suffered extensive damage. But with only a wood-fired stove in the living room and no power, she could never get warm. She went to bed every night wearing her clothes and a coat, still shivering.

It is only now, safe and warm in an apartment, that the shock of what she has been through is setting in.

At the Kalorama Memorial Reserve – where a community hub was established early on by a small band of residents, now supported by Yarra Ranges Council, the State Emergency Service, Red Cross and other services – a group of women gather for a play date.

Their children go – perhaps “went” is a better word – to Mount Dandenong Preschool, which now rests beneath the considerable girth of fallen trees

All have been without power for a fortnight and, although they count themselves far luckier than most, are still shaken by the terrifying storms. 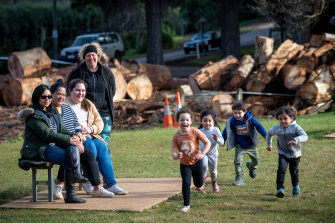 “I guess you can say that nothing fell on our houses, but the whole experience of the wind blowing and thinking that you’re going to die in your home that night – for me, I was really shaking,” Karen Placido says.

“And, you know, sometimes just my husband and I just break down, like everybody. It’s just hitting now.” 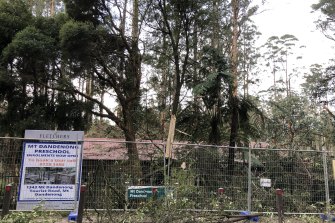 Some teachers from the preschool, which provides sessional kindergarten for three- and four-year-old children, come down to the Kalorama oval to check up on the kids and their parents.

Jody Howell, who has a daughter at the preschool and teaches at the local primary school, said parents and teachers were doing their best to take children’s minds off the devastation.

“I think it’s really sort of traumatic for them to see all the devastation around here but also to see the kinder with the big fence in front of it.

“And so you don’t know how much damage is actually really going in to these children. So it’s nice that they’re trying to lift their spirits.”

Yarra Ranges Kindergartens Inc interim chief executive Vik Naidu said his organisation was working around the clock to find an alternate site nearby to reopen kindergarten sessions in term three.

People aged over 65 who have been affected by the storm and need to access free emergency accommodation at Nellie Melba Retirement Village in Wheelers Hill can contact 1800 370 700 for more information.