It’s an utter shambles: Day One of the two-week quarantine rule and TOM PAYNE finds chaos at London’s main airport as he flies in from Lisbon

It is early afternoon on Day One of the Government’s new quarantine plan and confusion and chaos are unfolding in front of me at Heathrow Terminal 5.

Touching down after a two-and-a-half hour British Airways flight from Lisbon, myself and up to 100 passengers are among the first to arrive in the UK with the controversial scheme in full swing.

In normal times, the vast majority of us would breeze through immigration using passport e-gates.

But with the draconian quarantine rule in force, these automated terminals have been closed to stop vast numbers of passengers slipping through unchallenged.

Instead, every arrival has to be seen by Border Force officials who check for evidence of a completed ‘passenger locator’ form – the document setting out where passengers intend to self-isolate after leaving the airport.

Ministers have insisted the policy will be rigorously enforced. 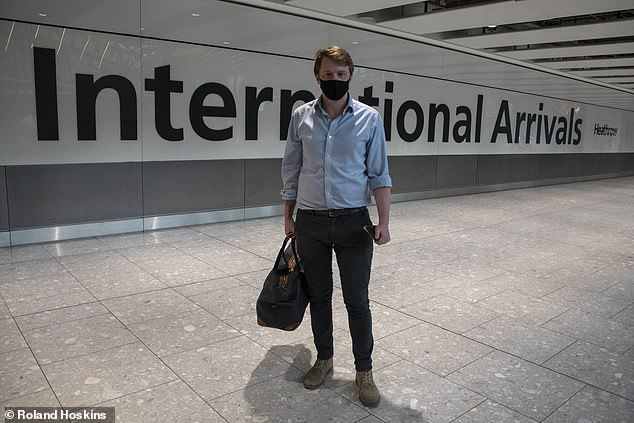 Pictured: Daily mail reporter Tom Payne arrives back into Heathrow terminal 5 after flying in from Lisbon on the first day of new UK rules for self quarantine come into force 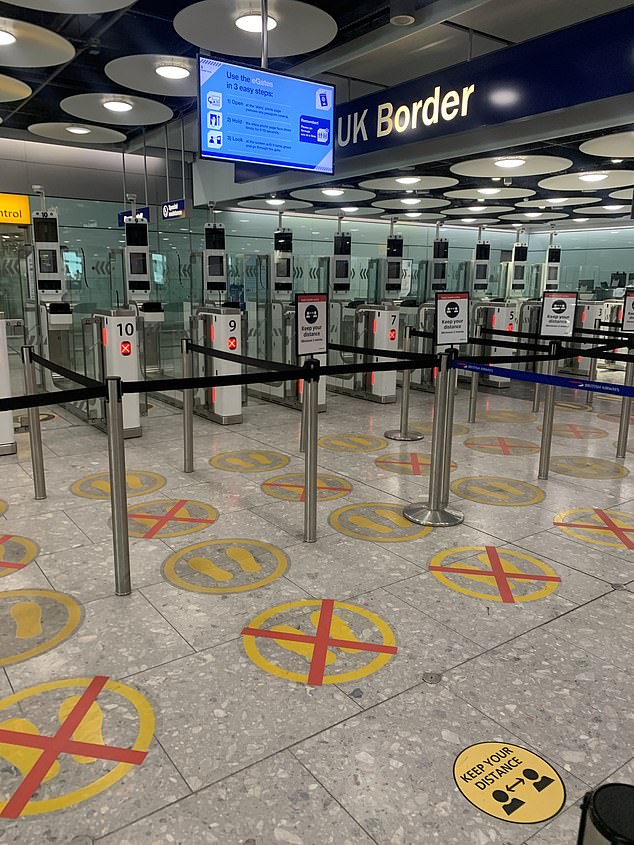 In normal times, the vast majority of us would breeze through immigration using passport e-gates. But with the draconian quarantine rule in force, these automated terminals have been closed to stop vast numbers of passengers slipping through unchallenged. Pictured: closed E-gates

But the experience yesterday suggests the scheme is riddled with obvious problems – and enforced by staff who have had it thrust upon them at the 11th hour, giving them little time to become acquainted with the rules.

The chaos began shortly after landing when it quickly became clear that the majority of people on my flight were blissfully unaware of the new restrictions.

I spoke to two Portuguese passengers who said they were in the UK to visit an assortment of friends and family in different locations.

They clearly had no intention of self-isolating at one address for a fortnight.

At the entrance to the arrivals hall, dozens of confused passengers ignored social distancing to gather around airport information staff tasked with managing crowds from flights just landed.

The junior staff members, who worked for Heathrow rather than Border Force, were unable to answer the most basic of questions about the measures.

It was clear they were woefully unprepared.

With large crowds forming, staff resorted to shouting instructions for passengers to fill out their forms using their smartphones.

We are told to complete the questionnaire by typing ‘gov.uk travel coronavirus’ into Google, but many passengers struggled to find the form using these search terms. 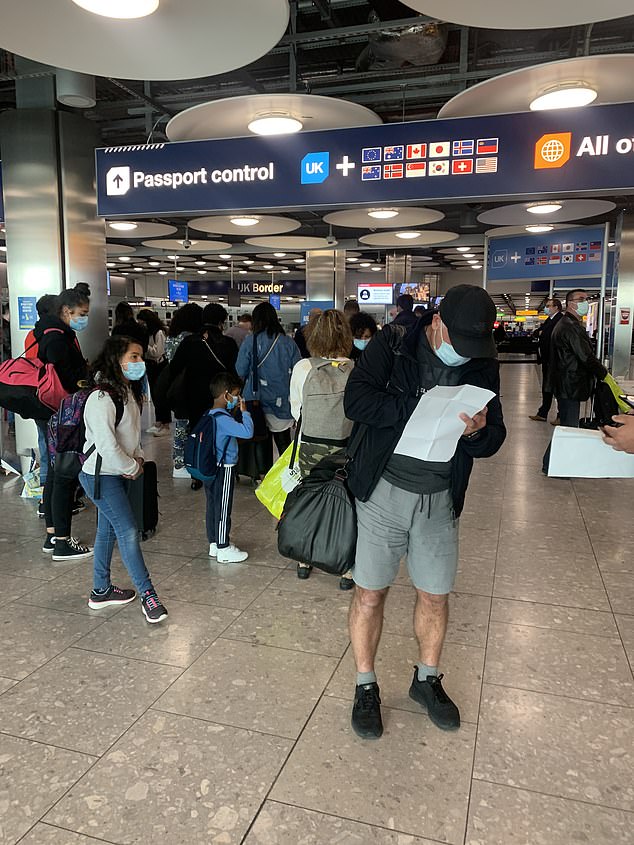 With large crowds forming, staff resorted to shouting instructions for passengers to fill out their forms (pictured) using their smartphones

The process was frustrated by Heathrow’s temperamental wi-fi service experiencing a sudden surge of people trying to log on in an area where mobile phones are usually banned.

One passenger who said his phone was not working was told he would be refused entry.

By this point, any attempt at social distancing had gone out the window.

My Airbus A320 from Lisbon was only half-full, but a packed jumbo jet would cause a huge bottleneck at the entrance to the immigration area, rendering any chance of keeping two metres distance all but impossible.

Adding significantly to the chaos, staff were unable to answer questions about the rules we are now bound to stick to.

A simple query over whether an upcoming GP appointment counts as an exemption, as the vague advice on the Home Office suggests, required the assistance of two supervisors and a flick through the hastily-issued rulebook.

After filling in the form through the gov.uk website, travellers are immediately emailed an electronic receipt, which includes a summary of all details and answers provided.

This email is then checked by Border Force officials.

There seemed to be nothing to stop passengers simply ticking a box saying they are exempt for one of 47 possible reasons as staff only appeared to check basic passenger information, such as name, passport number and expiry date.

Despite stating on my form that I believed I might qualify for one of the myriad exemptions to the rule, I was not asked to provide any evidence proving that was the case.

Twenty minutes after landing, I was waved through unchallenged after a check that took all of 30 seconds.

Worse still, there appeared to be no effort to check whether my address or mobile phone number were genuine.

I could easily have provided incorrect details, but did not.

These were not the only examples of lax enforcement I witnessed. 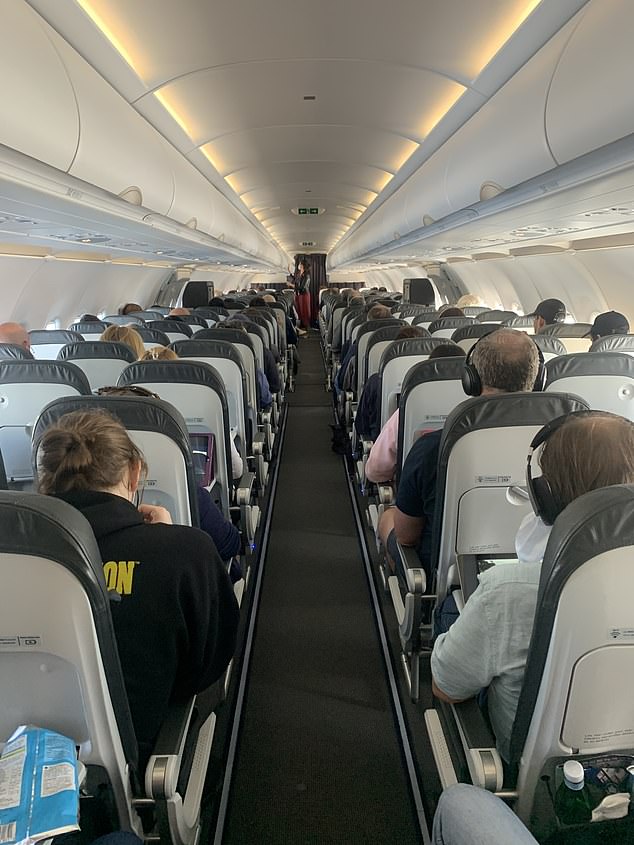 Touching down after a two-and-a-half hour British Airways flight from Lisbon, myself and up to 100 passengers are among the first to arrive in the UK with the controversial scheme in full swing. Pictured: BA flight to Lisbon on Sunday afternoon almost two-thirds full

Although I received an email from BA reminding me of the new rules, and linking to the Government’s online form, I had expected more stringent pre-departure checks at the airport – particularly as the Home Office says all passengers should complete their paperwork before they land.

Having checked in through the BA app, I went straight through security to boarding where an announcement was made about the need to complete the form.

A similar message was relayed mid-flight. But at no point was I asked to produce evidence of a completed form.

This is because the Home Office has stopped short of forcing airlines to make such checks so BA’s email fulfils its obligations to the scheme.

Under government guidance sent to airlines last week, carriers are only requested to check for evidence of completed forms at every stage of the journey – at check-in, bag drop and boarding.

They are also asked to remind passengers about the penalties for failing to adhere to the rules, but, again, this is just a request.

They are not required to do it.

All they are asked to do by law is remind passengers of the restrictions by way of a pre-flight email, which I received, along with announcements during boarding and before landing – both of which I heard.

Given these shortcomings, and the large number of apparent loopholes, it is easy to see why the policy is so hated by the airline and travel industry.

Over the last month, transport bosses have lined up to savage it as hopelessly unenforceable.

Having seen the system’s many faults for myself, I believe they may well be correct.

Tom Payne is now, as per the rules, quarantining for 14 days.

By David Barrett and Tom Payne for the Daily Mail

Serious cracks appeared in the quarantine measures on their first day of operation yesterday.

All arrivals to the UK – including Britons – must now fill in an online ‘contact locator’ form setting out where they will live for a fortnight. Refusal to do so risks a £1,000 fine.

But last night it emerged police will take ‘no immediate action’ even if a passenger has been found to have given a false address.

One border source said: ‘It’s been a complete farce. The vast majority of passengers have not filled in forms in advance.

Those who have filled it in are given an online reference number, but immigration officers can’t log in to check whether that form has been filled in properly.’ 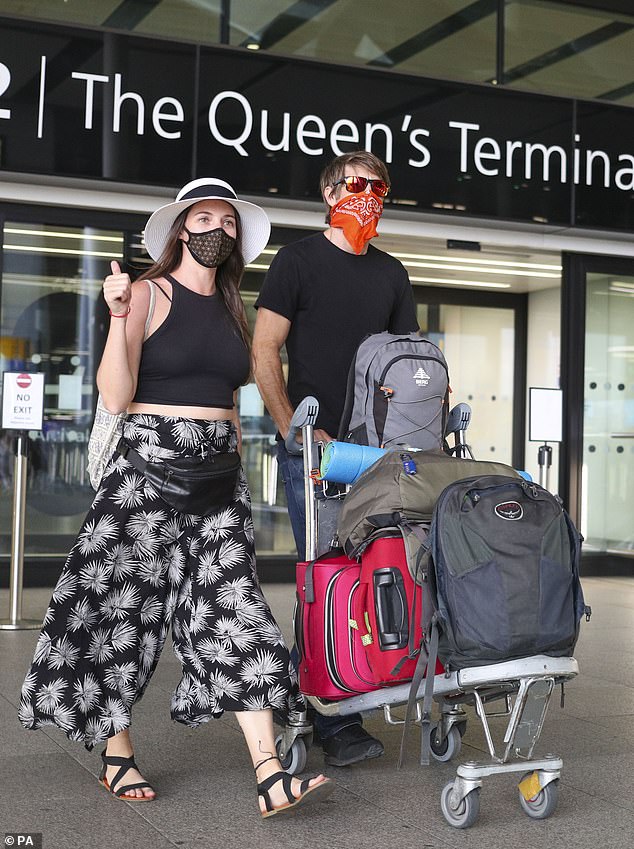 The source added: ‘It’s been impossible to socially distance in the Heathrow arrivals halls because so many people have been milling around.

‘There’s been trouble at Heathrow and at Calais and Coquelles, where the UK border checks take place for the Channel Tunnel. It’s a mess.’

The scheme was further undermined last night as the National Police Chiefs’ Council (NPCC) issued guidance which revealed the light touch forces will adopt when checking up on travellers during quarantine.

Even if a false address appears to have been given, police should take ‘no immediate further action’, the guidelines say, and the case simply referred to the UK Border Force.

If police visit an address where someone is supposed to be self-isolating and there is no answer, the NPCC says further visits are ‘suggested’ but there should again be ‘no immediate further action by police’.

That case should be referred to Public Health England.

And if police discover someone at a different address to the one they gave on their form, they should only remove the person to their given address ‘as a last resort’.

An NPCC spokesman said most of the responsibility fell to Public Health England, adding: ‘Police have a limited role in quarantine regulations.’

In the event of a case being referred by PHE to the police for action, he added: ‘We will seek to establish the circumstances and we will continue our approach of engaging, explaining, encouraging and, only as a last resort, enforcing.’

Passengers arriving at Stansted on a flight from Eindhoven in the Netherlands criticised the measures yesterday.

Ali Gurlek, 30, a software developer from London, said the measures ‘lacked common sense’ because he was about to travel home on public transport – as allowed under the rules.

At the Eurostar terminal at St Pancras, Sylvain Preumont, 50, a business manager who makes a weekly round-trip from Paris, said as a frequent traveller he was exempt but that he was no fan of the policy.

‘It makes no sense,’ he said. ‘This was invented to reassure people… to please them, and then we realise that it is not feasible.’

Labour leader Sir Keir Starmer said measures were needed at the border but quarantine was a ‘blunt instrument’.

‘We have got the situation where – weeks ago – other countries put quarantine in and we didn’t,’ he told LBC Radio.

‘Now as everybody’s lifting it we’re putting it in. I would much prefer to see some sort of testing regime at the airport.’

British Airways, easyJet and Ryanair have sent a pre-action letter, the first step in an application for judicial review, which argues the restrictions are disproportionate.