Topless woman sprints down Windsor High Street screaming ‘save the planet, save the trees!’ just moments after minute’s silence for Prince Philip

A woman who whipped off her top and ran half naked down Windsor High Street just after the minute’s silence to the Duke of Edinburgh has been accused of insulting his memory.

The woman removed a jacket to expose her breasts as she shouted ‘save the planet. Save the trees’.

She was apprehended by police and screamed as she was handcuffed while a security guard covered her with his jacket before she was led away.

Teenager Aida Inauat, 17, who witnessed the incident, said: ‘I was quite shocked. But it was totally inappropriate. 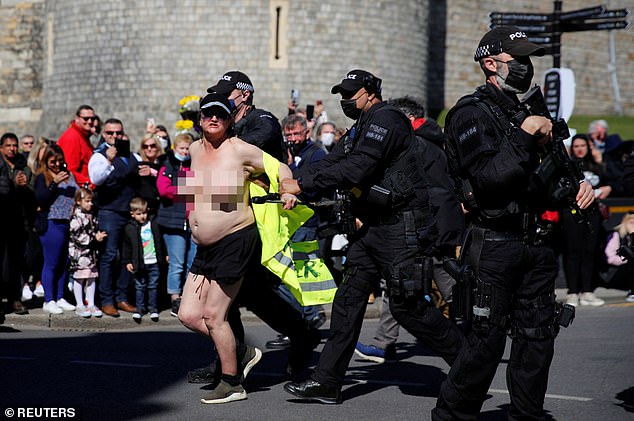 ‘She may have been thinking that she was going to draw attention. But it was actually embarrassing.

‘There must be better times and better places to do something like this. Not when we are trying to remember someone who has died.’

Her sister Sara, 16, added: ‘ It looks like she came prepared for this. She had a yellow jacket on and then threw it off and exposed the top of her body.

‘She timed it just when the minute silence had finished and people had been clapping for Prince Phillip.

‘This should not have happened.’

Jaspreet Singh. 66, of Southall, said: ‘It was a disgraceful way to interrupt what was a very respectful minute silence for the Duke of Edinburgh. 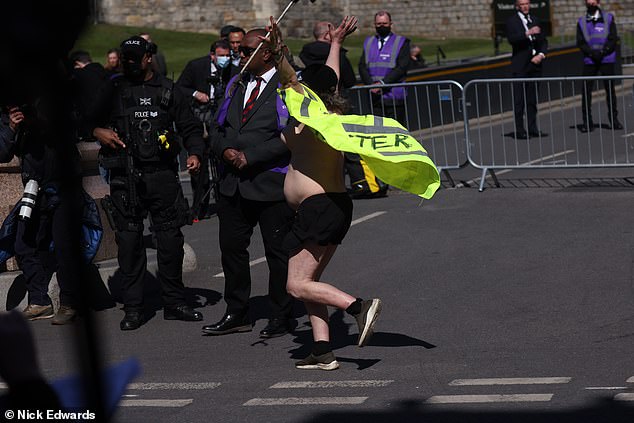 ‘This woman seemed to have no morals exposing herself like that. If she is trying to save the planet, that is not the way that she should be doing it.’

Linda Merryweather,51, of Wimbledon, said: ‘ what a rubbish way to protest.

‘There are perfectly good ways to protest and try to save the planet. Not like that, when somebody has just died who has done such great service for the country.

‘I hope that people soon forget what happened and remember Prince Phillip with respect and dignity. The same way that he respected and lived his life dignified.’

The woman was handcuffed and taken away by police.