'Total chaos' at Heathrow after 30 flights moved or cancelled

Heathrow has been plunged into ‘total chaos’ this morning after it forced airlines to reschedule or cancel dozens of flights, wreaking havoc on thousands of passengers’ travel plans.

In a rare ‘schedule intervention’, the west London airport last night told its 20 biggest carriers that they needed to move 30 flights from the morning peak, as the travel hub would not be able to cope with the high number of passengers in its terminals.

It means at least 5,000 travellers woke up to find their flights affected or even cancelled this morning, many of whom took to social media to vent their frustration.

Another branded Terminal 5 a ‘disgraceful shambles’, adding: ‘Left home at 3.30am, checked flight and cancelled on arrival.’

The issues appeared to start overnight, with singer songwriter Stacey Jackson complaining that she had to wait at least two hours on the tarmac after landing because the airport had ‘closed’, before being told they faced waiting until the morning to disembark because there were ‘no staff’ in the airport.

‘This is legitimately nuts,’ she tweeted, ‘Two hours on the tarmac waiting for a gate, no baggage handlers so no bags, passengers and kids exhausted… s**t show!’

It follows months of chaotic scenes at airports across the country due to crippling staff shortages amid an unprecedented surge in demand as the world exits the Covid pandemic.

Heathrow was first plunged into chaos in March as bosses struggled to hire enough workers amid widespread labour shortages in Britain. 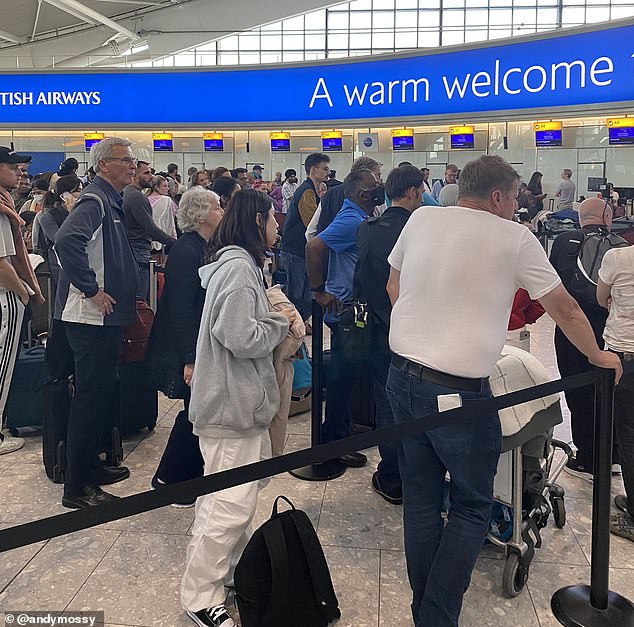 A passenger at Heathrow tweeted this image this morning, branding the situation ‘total chaos’, after airlines were forced to cancel or reschedule 30 flights 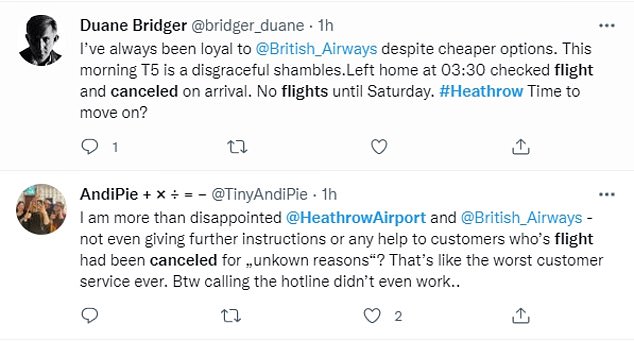 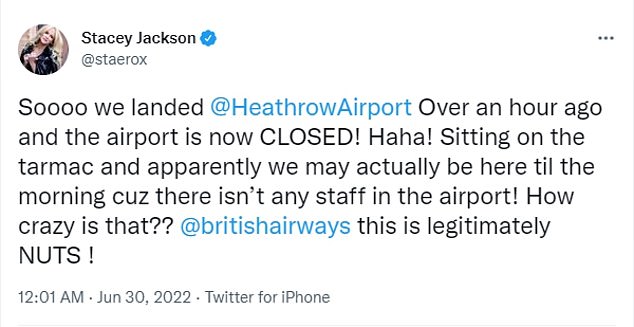 ‘Disgraceful shambles’: Fuming passengers hit out at chaotic scenes at Heathrow Airport overnight and this morning, including singer-songwriter Stacey Jackson, who said they waited at least two hours on the tarmac late last night and were told they faced having to wait until the morning to disembark due to a lack of staff

And the situation risks worsening as British Airway staff are also threatening to strike, after unions rejected a 10 per cent pay offer in favour of walkouts as early as next month, potentially during the school holidays.

‘We are expecting higher passenger numbers in the morning peak than the airport currently has capacity to serve, and so to keep everyone safe we have asked airlines to remove 30 flights from the morning peak,’ a spokesman for the airport said today.

‘We will work with airlines to get affected passengers rebooked on to other flights outside of the peak so that as many as possible can get away tomorrow, and we apologise for the impact this has on travel plans.’

Airlines may now be left with hefty compensation bills, depending on how many passengers they are able to quickly re-route.

In line with the EU 261 law, carriers must try to find passengers an alternative, including with their rivals.

Passengers arriving more than two hours late to their destination are entitled to compensation.

The Civil Aviation Authority said: ‘Although most airlines will book you on to another of their flights to the same destination, if an alternative airline is flying there significantly sooner or other suitable modes of transport are available, then you may have the right to be booked on to that alternative transport instead.’

A source for Heathrow told the Times that airlines, which have the contract with passengers, must pay the compensation and then ‘take up the matter’ with the airport.

There were painfully-long queues reported at Birmingham Airport this morning, as sun-starved Brits looked to get away for a summer break.

One branded it a ‘f*****g nightmare’ while another said there were queues snaking ‘all the way back to arrivals.’