Transport bosses brace for battle with unions when lockdown is lifted

So what IS the plan to get London on the move again? Transport bosses brace for battle with hardline unions as they try to get trains and Tubes back up and running after lockdown

Transport bosses are facing a battle with unions to get Tubes and buses back up and running to full capacity when the coronavirus lockdown is finally lifted.

Train drivers union Aslef and the Unite union have been calling for assurances on driver safety after the death of 26 Tfl workers from Covid-19.

Full rail and bus services could be among some of the first measures implemented as Britain moves out of lockdown. But union chiefs are insisting there needs to be a ‘very strong case’ made before they are satisfied it is safe for their members to return to work.

The ‘exit strategy’ reported at the weekend would see the country back up and running again in stages from May 11, with rail and bus services the first to be brought up to normal levels.

But Mick Whelan general secretary of the Aslef union implied that many workers will either still be off ill or self-isolating by then.

He said: ‘There have been no discussions on a return to full service but, given the fluctuating staff numbers, logistically, it would be unlikely.

‘There would also need to be a very strong case made before we would be assured that it would be 100% safe to do so.’

And Finn Brennan district organiser for train drivers’ union Aslef, also hit out at the plans for a possible return on May 11, tweeting: ‘So the Government wants full public transport services running in three weeks.

‘Are we to pretend that transport workers dying just didn’t happen? Or that many will still be ill or self isolating? 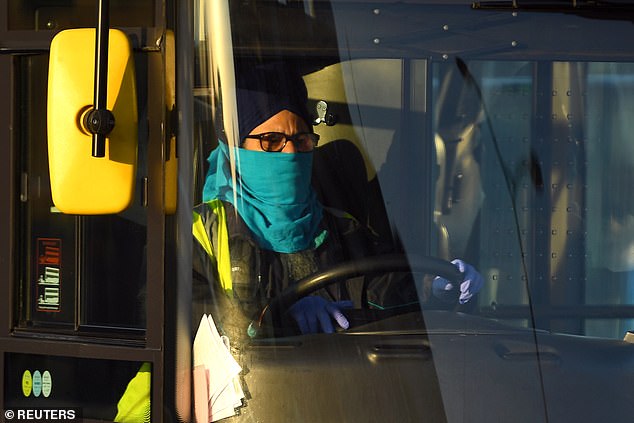 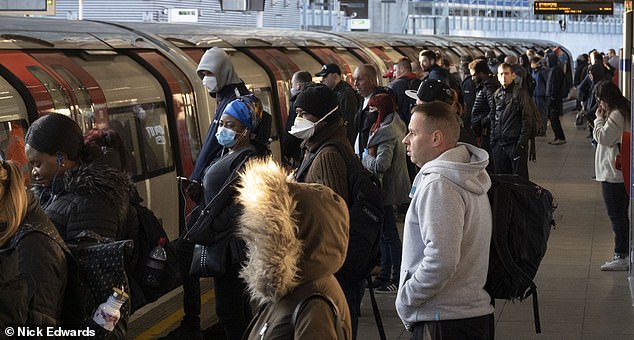 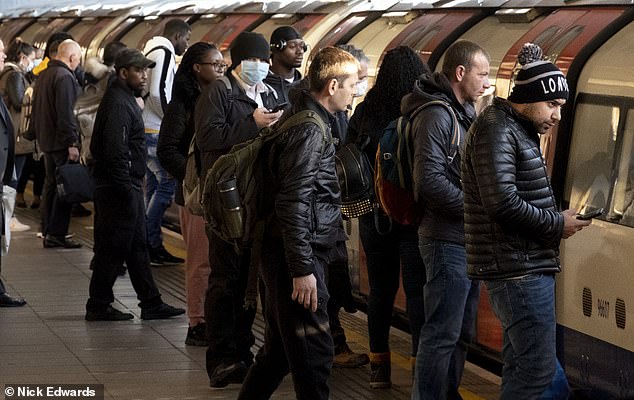 Full rail and bus services could be among some of the measures implemented in the first phase of ending the lockdown. Pictured: Tube passengers at Canning Town in east London today

‘Despite all the hypocritical rhetoric about heroes the contempt is clear.’

Unite secretary for the London and Eastern region Pete Kavanagh said: ‘TfL and the bus companies need to limit the number of passengers that can board at any one time and those passengers need to be wearing face covering to prevent the spread of the virus.’

In another day in the unfolding coroanvirus crisis:

Unite is also calling for bus operators outside of London to use central door only loading where possible and for cash payments to be stopped.

Network Rail chair Sir Peter Hendy also suggested Britain would not see a full return to capacity so soon, as social distancing measures would need to still be enforced in carriages.

He told BBC Radio 4  yesterday: ‘On long-distance trains and coaches we have got reservation systems so we can allocate seats. 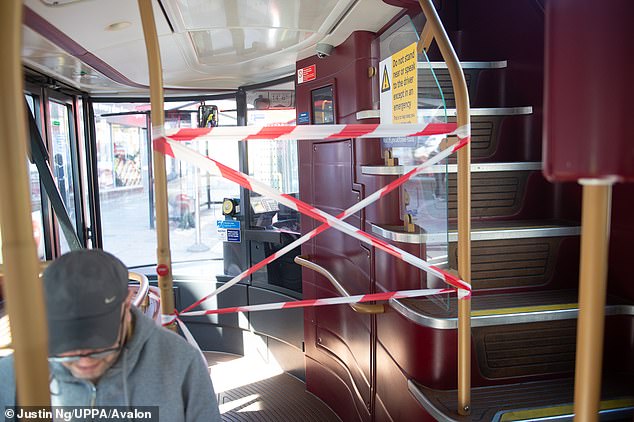 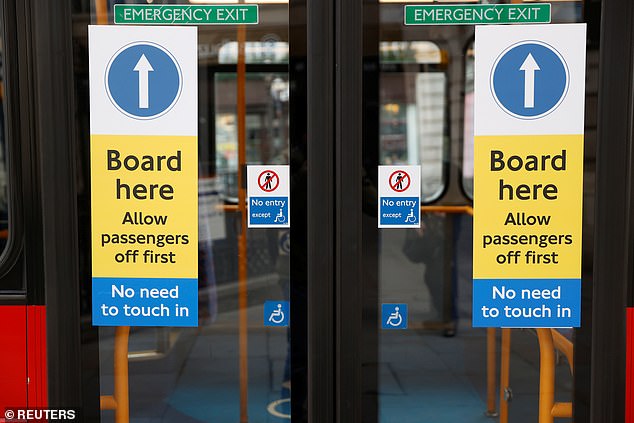 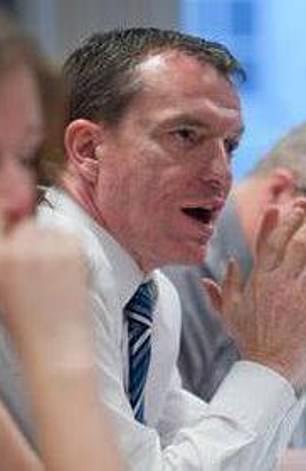 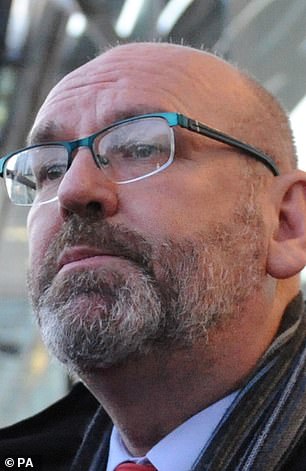 ‘In urban areas it may well be that we can’t carry the numbers who would normally travel.’

Union demands for driver safety include enforcing rules on passengers wearing face masks to prevent the spread of infection and urging construction sites to stagger opening times to lessen the number of people on transport at any one time.

Passengers have already been told to board buses by the middle doors to avoid contact with the driver.

But London Mayor Sadiq Khan was today accused of doing ‘too little, too late’ as the measures on London buses came into force.

The London Mayor boasted online about how passengers will now only be able to board buses using the middle entrance to ‘keep the transport network running for key workers, and allow for better social distancing between passengers.’

Transport for London also announced that customers ‘will not be required to touch in’ from today with their payment card or device, which will avoid anyone approaching the driver’s cab to use the card reader.

As many as 16 London bus drivers have died after contracting the coronavirus and the families of the drivers have previously complained about the conditions.

Meanwhile the farce on the Tube continued as coronavirus lockdown entered the fifth week, with commuters continuing to lay the blame on Khan and his handling of the crisis amid yet more photographs of packed carriages.

After the restrictions on the buses came into force today, one passenger wrote on Twitter: ‘Too little too late. Most European countries did this over a month ago.’ Another said: ‘You took way way way too long to do this this should of been done from day 1 of going into Lockdown like most EU Countries.

Others said the new rules, especially with the prospect of free travel, which just encourage more people onto the buses, and end up making the problem worse. 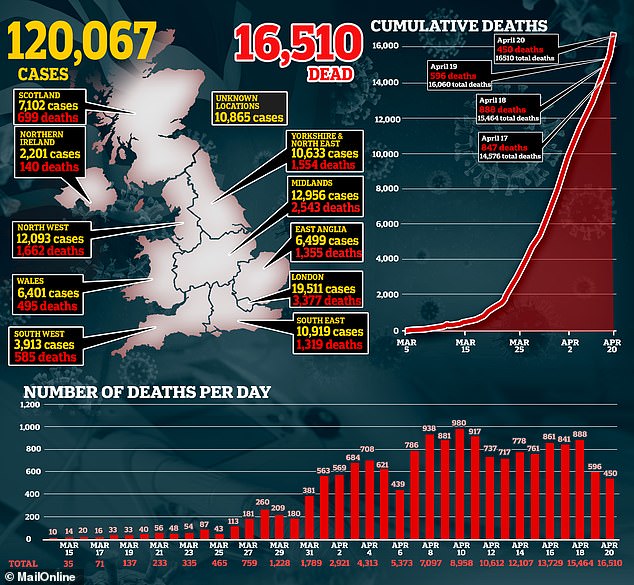 One added: ‘Sadly I believe the free travel will attract more non key workers to use the bus thereby increasing the risk of infection for our wonderful key workers and drivers

Another passenger said: ‘I experienced this first hand on my way to work today. Alot more people on the bus. was impossible to social distance. BAD BAD BAD decsions….I no longer feel safe.’

A south London bus driver identified only as Lorraine, 62, said last week in an online video that she is ‘proud to do her job’ but ‘frightened to die’ as she begged the Government to do more to help protect transport staff.

Almost half of Britons want compulsory facemasks after lockdown

A poll for MailOnline by Redfield & Wilton strategies this week found 48 per cent of Britons wanted the government to make wearing a facemask compulsory when lockdown is eased.

Some 54 per cent thought the policy had not been put in place because ministers did not believe it was effective.

However, 37 per cent suggested the government was not implementing the move because there are not enough masks in the UK.

Bus travel in the capital normally costs £1.50 for unlimited journeys within an hour, up to a maximum of £4.50 per day.

Londoners have been told to only use public transport for essential journeys.

Other safety measures include discouraging the use of seats near drivers, covering the holes in their protective screens with clear film, and a rigorous cleaning regime.

TfL’s director of bus operations, Claire Mann, said: ‘Bus drivers are pivotal in ensuring critical workers like NHS staff and grocery workers can perform the vital roles they do during this national emergency.

‘Their efforts are nothing short of heroic, and it is essential that we leave no stone unturned when looking to protect them.

‘Extending middle-door only boarding across the bus network will add another layer of protection on top of the other robust safeguards in place.

‘Even with these significant safety enhancements, I would like to remind Londoners to stay at home to ensure that critical workers and London’s bus drivers can get around the city safely.’

Pete Kavanagh, regional secretary at trade union Unite, which campaigned for front-door boarding to be banned across the whole of London, said: ‘This is a very welcome move and we are very relieved that TfL is listening to Unite and its members.

‘We have lost members of our bus family in recent days and we refuse to lose any more.

‘Unite has been asking for central boarding as an essential safety measure during these times because bus workers are, understandably, fearful for their health.’

It comes as Boris Johnson today moved to snuff out Cabinet pressure for an early easing of lockdown, making clear that a second peak in the coronavirus outbreak is the biggest threat to the country.

The PM has intervened from his recuperation at Chequers to warn there must not be any let-up in the draconian curbs until scientists are sure the disease will not flare up again.

Mr Johnson has told First Secretary Dominic Raab and senior aides that ‘moving too quickly’ would be the worst outcome for both the economy and public health.

The premier’s stance emerged amid signs of Cabinet splits over how quickly to ease the restrictions, with fears the crippling impact of lockdown on business and jobs will kill more people than the virus itself.

Hawks in government have been pointing out the NHS now has some spare capacity to treat patients, and suggesting that it should be allowed to ‘run hot’ to revive the economy. Chancellor Rishi Sunak and Cabinet Office minister Michael Gove are thought to be among those pushing for an earlier release.

Government sources have also been frantically playing down a ‘traffic light’ exit strategy circulated by senior Tories over the weekend, which could see schools partly reopened by mid-May. Early June is said to be more likely.

The PM’s official spokesman fuelled speculation that Mr Johnson will be back sooner rather than later today, briefing political journalists that he is getting ‘daily updates’ at Chequers – although stressing that he is not yet doing any ‘official work’.

Asked for Mr Johnson’s stance on the timing of lockdown, the spokesman said: ‘The big concern is a second peak. That is what ultimately will do the most damage to health and the most damage to the economy. If you move too quickly the virus could begin to spread exponentially again.’

He also said that once the lockdown is lifted ‘all of us’ may need to wear face masks in order to stop the spread of Covid-19.

Speaking on BBC Breakfast last week he said he is lobbying the Government to change its advice on wearing face coverings to add ‘another layer of protection’.

Khan said that wearing a non-medical facial covering makes it less likely you may inadvertently give somebody else Covid-19.

Speaking about the driver deaths he said: ‘It’s heartbreaking, I’ve had 16 bus drivers who have lost their lives, it’s personal to me. It’s really heartbreaking and my condolences to those families.

‘We’ve gone above and beyond advice we’ve been given by the experts.’

He continued: ‘The evidence I’ve seen is if you wear a non-medical facial covering it doesn’t necessarily limit your changes of catching the virus. What it does do, if you yourself are pre-symptomatic or asymptomatic, it reduces the chances of you giving the virus to somebody else.

‘And so wherever you can’t keep your social distance you should be wearing a facial covering.’

Medical guidance around wearing masks has been unclear and many have been left wondering whether or not they are an effective tool.

Scientists are split on masks. Some believe they may help stop asymptotic patients spreading the disease before they know they’re ill.

Others say surgical masks – the most popular – are too thin, loose-fitting and porous, which make it easy for the tiny viral particles to pass through.